You had it coming, Europe. And how!

The decision over the weekend by the Greek government to hold a referendum on Sunday on the reform measures being demanded by its creditors threatens -- within just a few days -- to destroy the illusions of five years of policies aimed at saving the euro. The easy way out is to cast blame on Greek Prime Minister Alexis Tsipras and his government.

After months of negotiations and just before the expiration of the deadline in question, the Greek government has now decided that it is unable to take responsibility for a clear "yes" or "no" to the results of negotiations on its own. Why didn't the Greeks says weeks ago that they wanted to put the negotiations up for a vote? That would have been the democratic way to go about it. In the very best case scenario, Tsipras' about-face on the referendum is a populist move (assuming the decision was taken with any political calculation). In the worst case scenario, it is a cowardly one (if the head of government got cold feet about making such a difficult decision).

But "constant cowardice" is also the answer to another question -- namely how the rest of the euro-zone members, Germany above all, could have allowed a situation to develop in which the erratic leaders of an economically insignificant country with a population of just 11 million people could bring the currency union to the verge of collapse?

For the past five years, politicians within the euro zone, under German Chancellor Angela Merkel's unofficial leadership, have shirked painful decisions that might have helped to solve the debt crisis in Greece. The consequence has been that the problems have been protracted rather than solved.

This trend began with the first Greek bailout program in 2010. In order to prevent a Greek default, the euro-zone states provided their first credit guarantees to Athens at the time. To do so, they used tricks to circumvent clauses in European law that prohibited precisely this kind of shared liability within the currency union. Even then, the more courageous act would have been to force Greece's private creditors to absorb their losses. Under that scenario, even if banks had fallen into financial difficulties, one could have still used tax money to either partly nationalize these banks or to refinance them with fresh capital. During the financial crisis, Great Britain showed precisely how that could be done.

The cowardice continued with the 2012 debt haircut for Greece. At the time, euro-zone officials lacked the courage to force Greece's private creditors to accept the total loss of their capital. They only had to accept losses of half. And it was already clear back then that Greece's debt load would remain unsustainable despite the 50 percent cuts. But the politicians ignored the uncomfortable figures and instead prescribed unrealistic savings and reform targets for Athens. They also entertained the comfortable illusion that a handful of troika officials could somehow rid Greece of its inefficiencies.

With these harsh policies, the creditor states contributed significantly to the fact that the Greeks voted at the beginning of 2015 for a new left-wing government. The way in which this new government was treated was demonstrative of the third case of cowardice. European politicians have refused to even negotiate a debt hair cut that Athens has continued to insist upon. The reason is clear: They are afraid of their own voters, to whom they would have to admit that the billions that have flowed into Greece have now vanished.

In all likelihood, that is exactly what has happened. Most voters will have suspected as much for some time now. 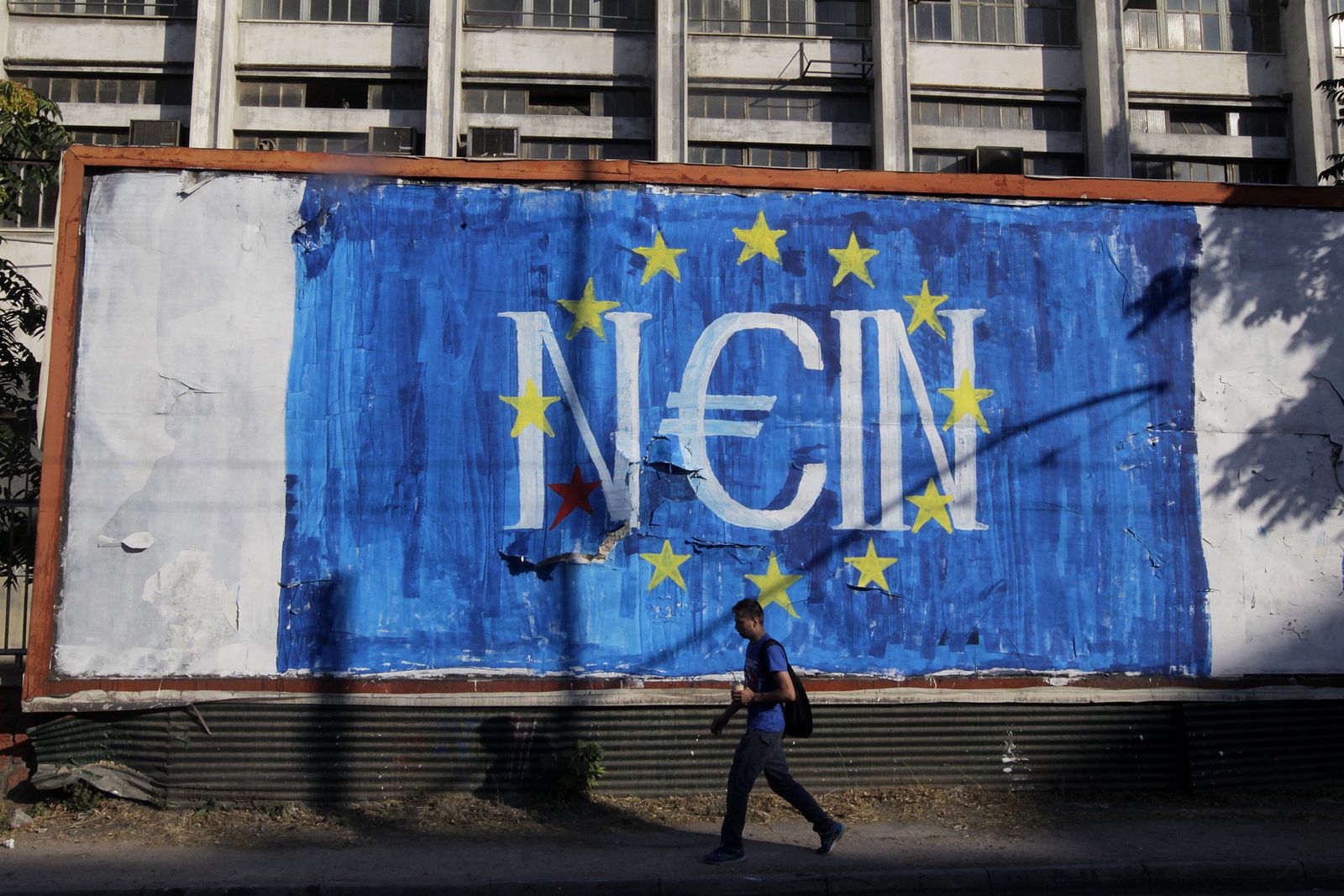 Graffiti in Athens, Greece, depicts the euro with the word "No" in German. The country closed its banks and issued capital controls on Monday.