SPIEGEL: Mr. Chancellor, you don't seem to be able to please anyone at the moment. Some mock you as the cuddly chancellor of a Grand Coalition in a "land of smiles," while others refer to Austria as a "land of the wavering." What is going wrong?

Faymann: In this crisis, it is important that we mobilize our strengths primarily through cooperation and not by distinguishing ourselves at the expense of others. Of course, we have to know where we want to go -- how not to lose sight of social security and justice, and how to address unemployment with training guarantees or economic stimulus packages. Under these circumstances, teamwork is always better than confrontation, of the sort I experienced in the previous government.

SPIEGEL: Your predecessor, Alfred Gusenbauer, blamed his failure on the argument that grand coalitions (eds: Faymann, of the center-left Social Democrats, or SPÖ, shares power with the conservative Austrian People's Party, ÖVP) need big projects to succeed. Does this imply that the economic crisis comes at just the right time for you?

Faymann: We have plenty of big projects without the economic crisis. They include, for example, the bolstering of the social safety net and the rebuilding of the healthcare system, so that everyone can receive the same treatment, whether he or she has private or government health insurance. The Grand Coalition is also critical to achieving these goals. But the economic crisis is overshadowing all other issues.

SPIEGEL: As a result of its banks' costly involvement in Eastern Europe, Austria has lost its rating as a first-class borrower.

Faymann: Paradoxically, our economic indicators are more favorable on average than those of other European Union countries. If we compare ourselves with our neighbor, Germany, which we like to do, our prospects are still better, despite all losses. We are also in better condition when it comes to unemployment ...

SPIEGEL: ... which, however, rose by 24 percent in your country in February compared with the same month last year.

Faymann: Nevertheless, we are still the second-best in Europe, with just under 4 percent last year, which was practically full employment. Our national debt, at 60 percent of the gross domestic product, is not out of line with that of other countries, and we are disciplined when it comes to our budget. Indeed, the hard facts paint a very positive picture, so much so, in fact, that we sometimes ask ourselves why there is so much critical international reporting (about Austria).

SPIEGEL: Because the economic crisis has thoroughly muddied the picture and the value of Austrian banks' bad debts in Eastern Europe, at just under €300 billion ($396 billion), is almost equal to GDP.

SPIEGEL: ... but only because you are not including Bank Austria, which is part of the Italian UniCredit Group.

Faymann: Well, we can't exactly define all banks that have been bought up by foreign companies as Austrian banks.

SPIEGEL: But they too want money from the Austrian government. 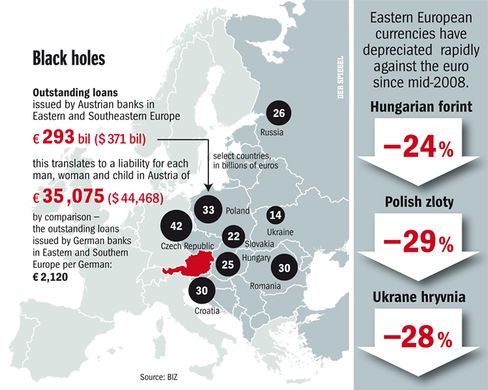 Graphic: Risks in the East

Faymann: Of course, we are asked to assist when the petitioner is not a 100-percent Austrian bank, but nevertheless employs close 11,000 people in Austria. The fact is that for many years, we were envied for being the hub for doing business with Eastern Europe. We were proud of that distinction. As long as we were gaining market share and played a role in the global export race, we were happy and satisfied. All of that cannot suddenly have been wrong. I am convinced that when the crisis ends, these countries will have the highest growth rates once again.

SPIEGEL: So all the bad news from Vienna, as a banking center, has been exaggerated?

Faymann: Even members of the European Council were saying at first: "What business is this of ours?" or "If they hadn't gotten themselves in so deep back then, they wouldn't have this problem today." But I am beginning to get the feeling that our common interest in greater stability is gaining the upper hand. And it's high time. The European Union as a whole must feel especially responsible.

'We Are 100 Percent Behind the European Peace and Prosperity Project'

SPIEGEL: Even for your Eastern European deals?

Faymann: Because this is an international crisis, everyone has to learn something from it. For example, it is time we finally created a public European rating agency, one that can assess risks more effectively because it is closer to where things are happening. We need financial market controls that work throughout Europe. Naturally, Austria is more heavily involved in Eastern and Southern Europe than other countries. But if the entire EU acknowledges the need for stability in the region, our overall assessment of the risk is significantly lower than is being portrayed publicly.

SPIEGEL: When German Finance Minister Peer Steinbrück criticized banking secrecy laws, including Austria's, and sarcastically threatened to send in the "cavalry," you accused him of having watched "too many films about the Wild West." Is this the new tone?

Faymann: When Peer Steinbrück starts using the sort of language again that is customary between the political representatives of different countries, that tone will be unnecessary. And if he thinks that everyone is about to take cover whenever he says something unpleasant, all I can say is that he is mistaken.

SPIEGEL: Christoph Leitl, the president of your chamber of commerce, said that the Germans shouldn't "open their mouths too wide." 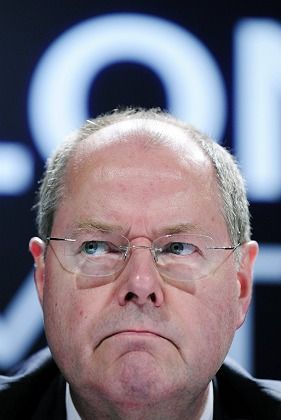 German Finance Minister Peer Steinbrück at the G-20 summit in London: "If think that even a German finance minister could benefit from a dose of self-criticism."

Faymann: Someone who uses military metaphors shouldn't be surprised when he gets the appropriate response. I think that even a German finance minister could benefit from a dose of self-criticism. I discussed the matter with Foreign Minister Frank-Walter Steinmeier, and it was my impression that he too has no interest in a German-Austrian war of words using military language.

SPIEGEL: The grand coalition government in Berlin (where Chancellor Angela Merkel of the conservative Christian Democrats shares power with the center-left Social Democrats, the SPD) has only slightly damaged the German chancellor's popularity. What can you learn from Merkel?

Faymann: Well, according to what I've been reading, her approval ratings have been headed downhill. But I believe that Angela Merkel has long demonstrated that she takes solidarity and commitment in a grand coalition seriously. And that she has taken on a number of social challenges in a spirit of common interest and on her own initiative, and not by working against the SPD.

SPIEGEL: You too are known for playing a moderating rather than a leading role in politics. Is this sufficient in times of great crisis?

Faymann: Leading does not mean making solitary decisions and, as in the past, having them announced by the town crier on the city's main square. Especially in a severe economic crisis, we have a special responsibility to make it clear that we support the political positions we share with our partners.

SPIEGEL: Your fellow Social Democrats in Berlin are in a relatively hopeless position at the beginning of Germany's super election year. What would you advise them to do?

Faymann: I don't like to give advice to someone who understands his situation better than I do. Perhaps that's what Mr. Steinbrück would do, but experience with Mr. Steinmeier is that he doesn't give me any advice, either. But now that the neoliberal concepts, which consistently preached the freedom of the market and demonized all intervention by the government, have so clearly failed in this crisis, Social Democrats must come up with their own answers.

SPIEGEL: Are you suggesting they need to get back to their political roots?

Faymann: Social Democrats, at least, must return to a stronger emphasis on government responsibility and provide, for example, for good, effective education, secure pensions and humane care for senior citizens. These sorts of things cannot be left up to speculation in the stock market. When it comes to these issues, the core ideology of Social Democrats is the right one. I have noticed that Chancellor Merkel, in particular, has repeatedly been successful at making these social values her issue.

SPIEGEL: To win last September's election, did you abandon Austria's role as the engine of European integration?

Faymann: No, and the elections to the European Parliament in June will bear me out. We are 100 percent behind the European peace and prosperity project.

SPIEGEL: But you and your fellow Social Democrat, Gusenbauer, made the solo decision to make the approval of all EU agreements contingent upon the outcome of referendums in the future. In doing so, you promoted the cause of EU opponents in your country.

Faymann: Don't forget that Austria became a member of this union as a result of a referendum. The fact that we only ratified the new EU Constitution and then the Lisbon Treaty in our parliament is not exactly glowing proof that we were confident that we had popular approval. And now, if we are asked to vote a third time because the Irish will perhaps vote no once again, then we cannot claim that this is what a parliament is authorized to do. It's a matter of style, as far as I am concerned.

SPIEGEL: Was it also a matter of style to announce this change in direction in the EU-critical paper, the Kronen Zeitung, instead of discussing it with the party?

Faymann: I didn't think it was a disaster, documenting my political stance in the form of a letter to the editor. And I did discuss it within the party, just in a small group. But I stand by my opinion: One shouldn't be afraid of one's own population.