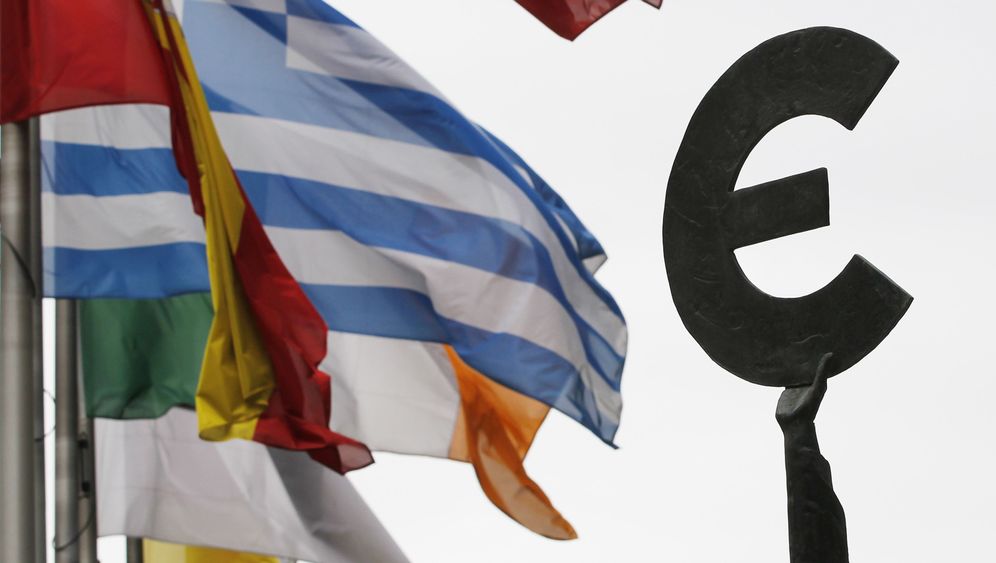 SPIEGEL: Mr Clegg, who will be the first to go -- Greece quitting the euro zone or the UK leaving the European Union?

Clegg: The UK is not going to leave the European Union. Of course not. We are inextricably wound up with Europe. In terms of culture, history and geography, we are a European nation.

Clegg: Of course. The Conservatives don't believe in leaving the European Union.

SPIEGEL: But the electorate does. Polls indicate that a clear majority would vote in favor of leaving the EU, if there was a referendum.

Clegg: Opinion polls across the EU -- in the Netherlands and in the south (of Europe) -- are showing a growing disenchantment with the EU as a whole. The UK is by far not alone in this regard. We are losing faith in the EU and its institutions -- for understandable reasons, considering the economic problems we face. But that doesn't mean that it makes sense to forecast the breakup of the EU as a whole.

SPIEGEL: Isn't that quite elitist? We carry on, regardless what our electorates say?

Clegg: Not at all. Far from it. I don't think that the answer to this disenchantment can be: Oh, so let's tear the thing apart. We can't return to the 19th century, draw up our drawbridges and say, we don't have anything to do with each other, Germany will not work with the Netherlands, the UK will not work with France. That's ludicrous. We are condemned to work with each other. Isolation is not the solution.

Clegg: That's entirely up to the Greek people to decide, probably at their elections in June. But if they were to leave the euro zone, there would certainly be serious knock-on effects elsewhere in Europe which we can hardly predict at the moment.

SPIEGEL: London has resolutely refused to adopt the euro and has famously stuck to the pound. Do you now sometimes detect a sense of schadenfreude among the many euro critics in your country?

Clegg: There is some gloating, definitely. But I never understand why. We as a country depend massively on the prosperity of the euro zone for our own prosperity.

SPIEGEL: On the basis of your experience with the pound, what's your advice to politicians in the euro zone?

Clegg: Two things are very clear. You cannot have a successful single currency unless the straitjacket of a single interest rate is compensated for with greater flexibility in the economy elsewhere. That's why things like labor reform, pensions reform and an increase in economic competitiveness are so important. We also need to finally open up the single common market in those areas where the common market is still lacking, for example in energy, services or the digital economy. This would bring true growth. And the second big issue is this: You cannot have a single currency without fiscal transfers. Those fiscal transfers can take lots of different forms: They can be the sharing of debt, maybe in the form of euro bonds. They can be transfers from one government to another. You have to have something which creates a fiscal accompaniment to monetary union.

SPIEGEL: So you are in favor of jointly issued euro bonds, an idea that is anathema to the German government?

Clegg: I have a huge amount of sympathy for the German taxpayers and the German politicians. They are understandably reluctant to entertain those ideas and to once again become the paymaster of the European Union. But I fear that fiscal transfers are unavoidable. The euro zone cannot thrive through fiscal discipline alone.

SPIEGEL: Good luck explaining that to a German audience.

Clegg: The problem is: We are seeing a lack of clear comprehensive leadership which sets out a vision of how the euro zone is going to be sustainable in the long run. What people desperately need to know is not that the answer is implemented overnight. Of course not. It is a complex thing, everybody knows that. But the euro zone must know where it is heading. Politically, all you need to do is set out the vision, so that people know where the vehicle is being driven to and thus confidence in the system can return. If you don't do that, it's not just going to be economically destructive.

Clegg: If the euro zone doesn't come up with a comprehensive vision of its own future, you'll have a whole range of nationalist, xenophobic and extreme movements increasing across the European Union. And, frankly, questions about the British debate on EU membership will just be a small sideshow compared to the rise of political populism.

SPIEGEL: Are you saying German Chancellor Angela Merkel is not active enough?

Clegg: Everybody should be more active. At the moment, you have one emergency summit after the other, one bailout after the other, and one government after the other gets voted out of office. This cannot carry on. We know this much from our continent: The combination of economic insecurity and political paralysis is the ideal recipe for an increase in extremism and xenophobia. And I, as a passionate liberal and pro-European, think it would be a disaster if a lack of grip and a lack of a comprehensive solution were to lead to a push to the extreme right or extreme left. But that's where we are heading.

SPIEGEL: In Germany, at least, populist parties don't appear to be benefiting from the crisis -- yet.

Clegg: That's because your economy is doing quite well. I want to pay tribute to the remarkable German economic model. German citizens do not now feel as insecure as Spanish citizens, or Italian citizens or Greek citizens. But do not underestimate what a powerful emotion fear is. It is one of the most powerful emotions in society. And there is a lot of fear at the moment. It would be short-sighted to think that extremism and instability elsewhere in the European Union will not eventually affect everybody, Germany as well as Britain.

SPIEGEL: You call for more leadership. But what has been the UK's contribution to solving the euro zone's problems so far? Cameron didn't even want to be part of the fiscal compact, a new treaty that will ensure members' budgetary discipline which 25 EU countries have signed up to.

Clegg: If you look at what we did in the run-up to the last European summit, we were probably more active diplomatically than any other government. I was on the phone constantly, as was David Cameron. We signed a letter with 11 other governments setting out some of the things we talked about. If we complete the single market as we should have done 20 years ago, we will be creating more jobs, more prosperity, more competitiveness. It is unforgivable that European leaders meet every few weeks and issue declarations about completing the energy market, energy liberalization, the digital economy -- and then they just don't do it. It's criminal that they are still failing to deliver jobs and prosperity. It just requires signing a piece of paper.

SPIEGEL: Why don't they do it?

Clegg: Because of the vested interests in the national economy. Liberalization always bumps up against people who don't like it. You have energy companies in some very large member states who don't like it. You have the sentiment of protectionism which again increases at a time of fear. But it's the wrong recipe. What we should be doing in the EU as a whole is more economic integration in the single market, rather than less.

SPIEGEL: The UK is back in recession -- partly because of your ambitious deficit reduction agenda. Are you overdoing austerity?

Clegg: No. We're not austerity fanatics. We are much more pragmatic and more flexible in getting this job done than our critics allow. But growth and stable public finances are two sides of the same coin. You cannot have one without the other. By the way, the new French President François Hollande, who is making headlines across Europe with his growth agenda, completely agrees with this. His own plan for deficit reduction is almost identical to ours. His is actually more severe.

SPIEGEL: Why are you so categorically opposed to the proposed financial transaction tax, which Berlin and Paris are calling for?

SPIEGEL: Ideologically, we have no problem at all with such a tax. In fact we have our own versions of it. We introduced the bank levy in 2011, taxing the amount of debt a bank takes on at a rate of 0.088 percent. The Treasury raises 2.5 billion pounds this way (per year). We also have a stamp duty of 0.5 percent on share purchases, raising 3 billion pounds. In fact, we have imposed more taxes ourselves on the financial system than many countries in the EU.

SPIEGEL: But you're doing everything you can to block German Finance Minister Wolfgang Schäuble's version of a pan-European financial transaction tax.

Clegg: Banking is a highly integrated global industry. It doesn't make much sense to apply a transaction tax over one little bit of that system, when it can be so easily avoided by migrating to other parts of the system. A transaction tax as it is advocated only makes sense on a global level. Let's push for that. We'd be happy to lead that argument. But until then we have to be careful. Let's remember that when the European Commission produced its proposal for this financial transaction tax, its own impact assessment said that it would lead to the loss of 500,000 jobs. At a time of intense economic insecurity and when there is recession lurking across the European Union, you need to think twice before pushing the start button on a proposal which, according to its own proponents, will chuck hundreds of thousands of people out of work.