SPIEGEL: In a letter to your European partners sent last week, you called for the arduously negotiated aid package to be reopened and for the conditions placed on Cyprus to be eased. Why are you seeking to annoy your creditors, particularly Germany?

Anastasiades: The irritation is totally unfounded. Nowhere in my letter did I call for the deal to be renegotiated. Nevertheless, I did make clear that a few of the things the Euro Group decided on in March of this year are having serious effects on the entire Cypriot economy. What is most important to me is that we get the liquidity problems for one systemic bank in Cyprus under control. And the reactions weren't just negative, either. EU Council President Herman Van Rompuy wrote to me that he wants to raise the issues at the European Council (the powerful body representing the leaders of the 27 EU member states).

SPIEGEL: You have Berlin in particular to thank for the tough conditions.

Anastasiades: I found the Euro Group decision to be unfair and bitter. I had just gotten elected and the problems with the Cypriot banks had been protracted over years. I promised my voters that I wouldn't touch savings deposits and instead presented an alternative plan that fulfiled the troika's demands. However, the Euro Group insisted that savers also carry part of the costs of the aid program, which means that I have now lost credibility with my voters. But now we want to look ahead.

SPIEGEL: The government in Berlin is of the opinion that Cyprus should first take care of a few more of its problems before it asks for better conditions.

Anastasiades: I am not demanding any preferential treatment -- just equal treatment. The fact is that the other countries receiving aid -- Ireland, Portugal and Greece -- have received easings of conditions. Certain conditions imposed by the troika are stifling our economy. That's putting Cypriot society to the test.

SPIEGEL: So you're blaming Germany's austerity dictate for Europe's recession?

Anastasiades: I understant the German concerns. Germany is the largest netpayer in the European Union and that includes the EU budget as well as the (permanent euro bailout fund) ESM. The fear that German taxpayers will be forced to carry the costs of errors made by others is deeply anchored in society. However, budget discipline alone won't help us move forward. We need to drive growth at the same time. I'm pleased that Berlin has recently signaled that it will soften its austerity policies.

SPIEGEL: One of the most outspoken critics of Germany's austerity policies has been French President François Hollande. To what degree do you think he has influenced Germany's change of heart?

Anastasiades: Hollande understood early on that austerity alone is harmful to the economy. The paper that Merkel and Hollande recently presented proves that the two create better policies together than when each proposes things on their own. Take the banking union, for example. Both Merkel and Holland would like to see it implemented quickly. This shows that Germany has progressed on this front.

SPIEGEL: Many of Europe's small- and mid-sized countries complain that Berlin and Paris are attempting to go over their heads to dictate the EU's policy course.

Anastasiades: The relationship between large and smaller countries in the EU is like a family. In principle, they are all the same, but the parents want to know what the children are doing with the money they earn. We need the German-French engine (in the EU), but that doesn't mean that we must accept everything proposed by Merkel and Hollande.

SPIEGEL: The German-French proposals imply the creation of a two-speed Europe. They want more frequent meetings of euro-zone leaders and an appointed full-time Euro Group chief and their own committee in the European Parliament.

Anastasiades: If euro-zone countries and non-euro-zone countries are treated differently, then there will be a danger of a two-class Europe. If a certain policy applies exclusively to the euro zone, then this will lead to conflicts and, in the end, Europe could even fall apart. What we need is the opposite: a bigger political union and greater equality among the member states.

SPIEGEL ONLINE: Elections will be held in Germany in September. As the president of Cyprus, logic would dictate that you would support Merkel's challenger Peer Steinbrück, who has criticized Merkel's "one-dimensional" austerity policies and called for a Marshall Plan for Europe.

Anastasiades: I may have suffered under Angela Merkel's tough position vis-a-vis Cyprus, but I also won't forget that she supported me during my election campaign. My wish is that she will remain chancellor. 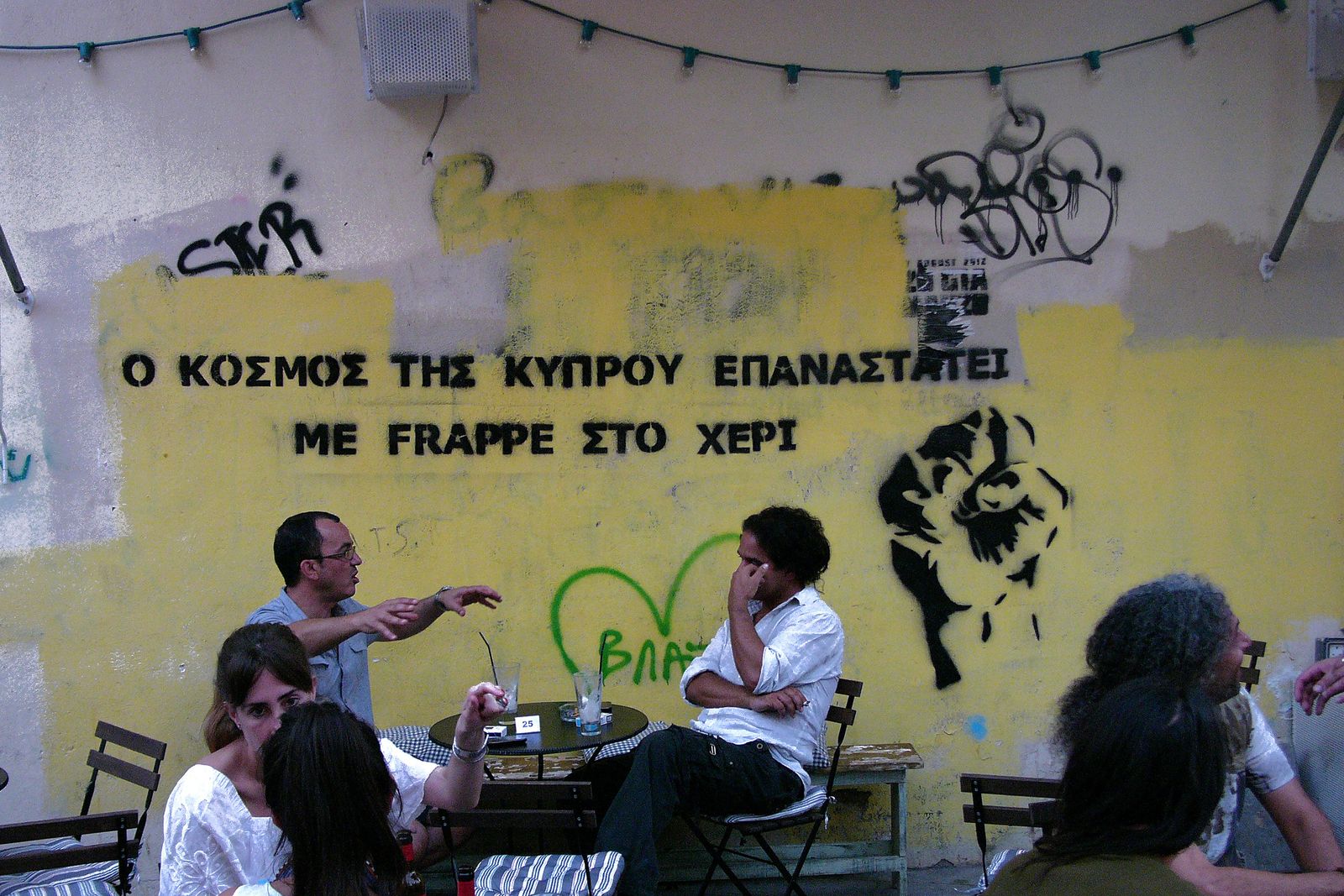 People sit at a coffee shop as on a wall reading in Greek, "The people in Cyprus make revolution with frappe in their hands" in Nicosia.