SPIEGEL: Mr. Oettinger, can you tell us who said: "It has to be possible to build a new generation of nuclear power plants"?

Günther Oettinger: That could have been me.

SPIEGEL: That's right. At the time, you were floor leader for the center-right Christian Democrats in the state of Baden-Württemberg. Would you like to amend that statement now?

Oettinger: Absolutely not. It's very well possible that new nuclear power plants will be built -- not in Germany, but in other countries. I accept the moratorium and the probable phase-out in Germany. But I also observe other countries -- both outside of Europe and within the European Union -- investing in R&D for atomic energy. Look at France and Great Britain: These major member states are working hard to build the next generation of nuclear power plants.

SPIEGEL: Two years ago, when you were still the governor of Baden-Württemberg, you fought to revoke what you called the "ideologically-driven lifespan limit" passed in 2002 by Social Democratic Chancellor Gerhard Schröder. But was it not German conservatives who pursued an ideological path -- one in favor of atomic energy?

Oettinger: In general, energy policies in Germany are too driven by ideology. I don't know of any other country in the EU where debates about power generation are so contentious. With the exception of the Greens, all parties long defended the use of nuclear energy. The consequence of injecting ideology into the debate has been that we in the CDU have seen atomic energy in too positive a light. That I'll admit.

SPIEGEL: Following the initial reports from Japan, you said the situation was "in God's hands." How much has the unfolding disaster at the Fukushima nuclear facility shaken your faith in the safety of atomic energy?

Oettinger: When Chernobyl happened, we in the West were comforted by the fact that it was the result of outdated Soviet technology and human error. But I have nothing but respect for Japan's abilities when it comes to industry and technology. That's why Fukushima has been such a turning point for me. It has made me start to doubt. If the Japanese cannot master this technology, then nuclear energy conceals risks that I didn't see before.

SPIEGEL: The Fukushima disaster has led to plutonium seeping into the earth, radioactivity in the ocean and the potential evacuation of hundreds of thousands of people. How big is the threat to Europe?

Oettinger: We feel that the Japanese government is doing everything it can to limit the damage. Each day, there are one or two positive reports -- and then more setbacks. There is some hope that the effects can be limited to the region, as bad as that is for the people living near the stricken plant. But you can't rule out the possibility that the radius will expand.

SPIEGEL: Given the severity, shouldn't all of Europe bid adieu to atomic energy as soon as possible?

Oettinger: Article 194 of the Lisbon Treaty gives the European Union extensive powers to set energy-related laws. But there is one exception: Member states are responsible for determining their own energy mix. We in the Commission are focused on the issue of safety. So I have high expectations for the stress tests mandated by the member states in the European Council.

SPIEGEL: The agreement reached at the recent European Union summit didn't go beyond a memorandum of understanding. The crucial issue, though, is whether EU member states can agree on the highest uniform safety standards.

Oettinger: I'm very satisfied with the result, and the same incidentally holds true for the chancellor. When she arrived at the summit, it still was still far from certain that there would be common stress tests. All member states -- both those with and without nuclear energy -- accept that we will apply the highest standards in defining the safety criteria. We are currently negotiating the criteria with the atomic supervision authorities of individual member states.

SPIEGEL: What exactly will these tests look for?

Oettinger: We want to design the stress tests based on the concrete causes of the Fukushima catastrophe. The cooling systems failed because the power supply and the emergency back-up power units gave out. We want to test how safe the cooling system is and how staggered the various emergency electrical circuits are in the event of an earthquake or flood. We will also run simulations of a terrorist attack with an airplane and of a cyber attack on the computer system.

SPIEGEL: If the stress tests are carried out by the nuclear supervisory authorities of the individual states, their governments may be able to influence the results.

Oettinger: We want multinational teams to conduct the stress tests. We are also fighting for the European Commission to have significant influence because the results only attain their full authority when they can be compared.

SPIEGEL: Still, it's not enough to have the governments of the EU's 27 member states agree on uniform criteria for the stress tests. Afterwards, a government could still say, for example, that it isn't going to fortify the outer hull of a power plant enough to withstand a plane crash because it considers the risk too small.

Oettinger: In the end, there always remains a degree of risk that you can reduce through retrofitting and investments. But you can never completely eliminate it. Either you accept this residual risk -- or you shut it down.

SPIEGEL: How likely do you think it is that any nuclear power plants will be taken off-line if they fail the stress tests?

Oettinger: If we can't imagine shutting down certain nuclear power plants, we can just forget about the stress test right now. With 143 nuclear power plants in the EU, I wouldn't venture to predict that all will pass. If we apply the highest safety standards, no country can rule out from the get-go that it may have to retrofit or shut down its power plants.

SPIEGEL: If Germany permanently shuts down the seven oldest nuclear power plants it has taken off-line pending the results of the stress tests, will it lead to bottlenecks in Europe's energy supply?

Oettinger: At the moment, there are some concerns in Belgium because turning off the seven German power plants has made it hard to control the grid. But when it comes to the greater European energy supply, these seven nuclear power plants aren't crucial. They make up about 8 percent of Germany's energy market and just under 2 percent of Europe's. Still, the German moratorium will place a greater burden on coal and natural gas for some time.

SPIEGEL: In the Environment Ministry in Berlin, which also handles nuclear safety, there are plans to take the rest of Germany's nuclear power plants off-line by 2017. How would that affect Europe's energy supply?

'You Only Have to Throw 17 Switches'

Oettinger: In Europe, Germany is both the largest submarket for energy and the largest economy. How Germany reorients its energy policies is also relevant to the rest of Europe because of its geographical location. But we should wait for the findings of the commission appointed by the government.

SPIEGEL: Still, 2017 is a very ambitious goal for the phase-out.

Oettinger: Everything is possible -- because you only have to throw 17 switches. But doing so raises many issues: How do things look in terms of securing the energy supply? How many jobs are in danger? Will energy get more expensive? Can we still reduce CO2 emissions as much as we'd planned? The government has to think about all these issues.

SPIEGEL: Energy prices are already approaching the limit of what society will accept.

Oettinger: That's right. We can no longer afford price increases like the ones we've seen in recent months as a result of the Renewable Energy Act (EEG). There also has to be an end to politicians' inventiveness when it comes to the financing the budget.

SPIEGEL: Where are the funds for the expansion of a new energy system supposed to come from? You've put the figure at €1 trillion ($1.42 trillion).

Oettinger: Indeed, our calculations -- which include production, storage capacities and transport networks -- indicate that we will need to invest a trillion euros over the next 10 to 20 years. Though this is an exceedingly large amount, it's still not much when measured in terms of Europe's potential.

SPIEGEL: Nevertheless, that money has to come from somewhere. Who will foot the bill?

Oettinger: I'm thinking primarily of private investments. Still, this is a major undertaking. Part of Europe's grid infrastructure -- a part which accounts for €200 billion of that trillion in total costs -- will also probably have to be financed via the energy costs of tomorrow. An assessment of about one cent per kilowatt hour that consumers will have to shoulder for this enormous undertaking is under consideration.

SPIEGEL: Since Germany's moratorium was announced, the stock market values of RWE and E.on, two of Germany's major energy providers, have fallen significantly. Do you think the two companies are now candidates for takeovers by other European energy suppliers, such as France's EDF?

Oettinger: In Germany, we have companies in all sectors that are world leaders. In auto manufacturing, we have VW, Daimler and BMW; in electrical engineering, we have Siemens; in chemistry, we have BASF and Bayer. It should also be one of our industrial policy goals to keep some German energy companies in the Champions League.

SPIEGEL: When you were the parliamentary floor leader of the CDU in Baden-Württemberg, you once said that it was "wrong for the Greens to wage such massive battles against atomic energy." From today's perspective, don't you now have to admit the Greens were right?

Oettinger: I've been around since the Greens were founded. They first made it into Baden-Württemberg's state parliament in 1980. Over the course of their history, the Greens have ditched most of their founding ideals: They have voted to remain part of NATO, to keep the German military strong and even to participate in wars. But the issue of atomic energy has remained. They have seen the risks more clearly than others. And now they're reaping the rewards.

SPIEGEL: The debate over nuclear energy has brought the left and the right closer together in Germany. Do you think that improves the chances of future coalitions made up of the CDU and the Greens?

Oettinger: I prefer to see the CDU in coalitions with the (business-friendly) Free Democrats rather than with the Greens. But I'd prefer to see the latter over a coalition between the Social Democratic Party (SPD) and the Greens. And it's not just for reasons related to political influence that the CDU should keep the option open to form coalitions with the Greens. There's an expectation in society that the CDU and the Greens reach a consensus on important issues such as the economy, the environment, family and society, prosperity, wealth and redistribution.

SPIEGEL: Do you think this is also possible at the federal level? Chancellor Angela Merkel has said she views the idea of a coalition between the CDU and the Greens in Berlin as a "pipe dream."

Oettinger: After the end of the CDU-Green coalition in Hamburg, and with the recent results from state elections in Rhineland-Palatinate and Baden-Württemberg, a CDU-Green coalition this year is not an option. But I hope that things don't stay this way until the next general elections (in 2013). We could still see successful types of collaboration in this decade between the CDU and the Greens -- at every level.

SPIEGEL: Mr. Oettinger, thank you for taking the time for this interview.

Translated from the German by Josh Ward 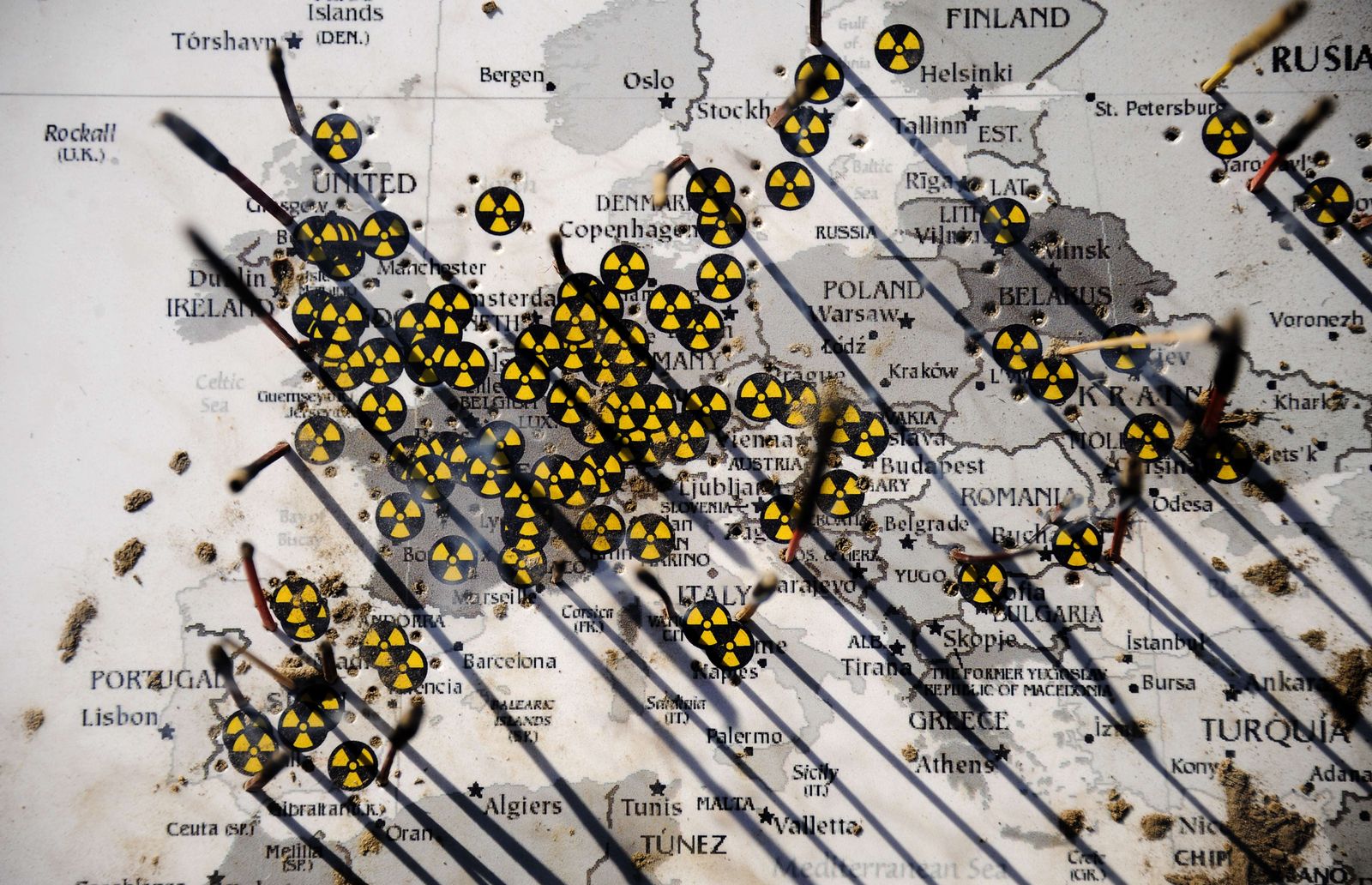