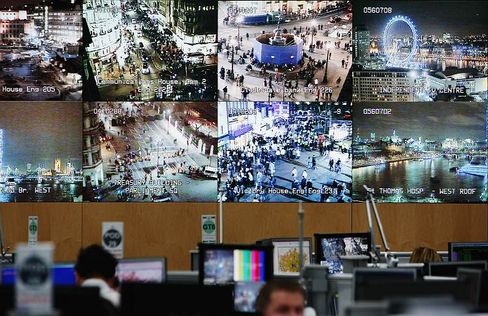 Video surveillance in London: "The first freedom is to be alive."

It's a tough balance that each country must strike: How do you balance the need for security against the basic right to freedom in the age of terror?

In the European Union, one man is responsible for providing this answer: The EU commissioner for Justice, Freedom and Security. Italy's Franco Frattini has held the office since 2004, and he also serves as the vice president of the European Commission. Previously, he served as an attorney, judge, member of parliament and minister in his homeland.

In recent months he has triggered critical headlines with his proposals to:

But is the commissioner for freedom and security going too far with his proposals? Criticism of the proposals has been considerable. "The EU is creating measures to build new walls," Wolfgang Kreissl-Dörfler, a member of the European Parliament for the center-left Social Democrats, said of the entry-exit system. His colleague Manfred Weber, who is the domestic affairs spokesperson for the conservative Christian Democrats in the European Parliament, warned, that the "effectiveness of existing measures should first be fundamentally evaluated before new measures are proposed."

Frattini himself argues that freedom without security is worthless. "The first freedom is to be alive," he says. Frattini is temporarily on leave from his posting as commissioner because he is currently participating in national elections in Italy. If his party wins, he could become Italy's next interior minister. He recently gave what is expected to be his last interview as a European commissioner -- at least if his Forza Italia party, led by former Italian Prime Minister Silvio Berlusconi, wins the Italian election -- to SPIEGEL.

SPIEGEL: Mr. Vice President, if you really return to Italy, many Germans and other Europeans will breathe a sigh of relief. Brigitte Zypries for example, the German Justice Minister, recently accused you of disregarding the German constitution. Are you an enemy of the constitution?

Frattini: I have fulfilled my duties for three and a half years with good results and in good collaboration with the member states. I enjoy the job a great deal ...

SPIEGEL: ... Even when a minister for European Union affairs from a German state, like Uwe Döring of Schleswig-Holstein, derides you as a manic data collector?

Frattini: Well, I am crazy, absolutely. Im crazy about safeguarding the safety of the citizens of Europe.

SPIEGEL: The European Commission wants to follow the example of the United States in collecting a great deal of data on airline passengers, from seat number to the name of the travel agent who booked the flight. That does indeed sound a bit crazy. Does it need to be that way?

Frattini: In the last year we have come to an agreement with the Americans on the transfer of data, in order to safeguard Americans security. I would find it strange if we didnt then also concern ourselves with Europeans security. This is why the Commission has made a proposal which -- with or without me -- must be discussed. Because the time has come for us to confront the threat of terrorist organizations.

SPIEGEL: And they can be stopped by collecting flight data?

Frattini: Investigations have shown that all the terrorists who have committed attacks used airplanes, either to escape or to maintain contact with terrorist groups. Take just the example of the attackers in London: Before the attacks, they flew to Pakistan and back.

SPIEGEL: But in order to catch a few terrorists, data on many millions of passengers will be saved.

Frattini: Yes. But we wont be interfering in their private lives. If I dont do anything wrong, my data will be collected, saved and then destroyed -- its that simple.

SPIEGEL: According to the notion of the European Commission, the data will be saved for a very long time -- 13 years.

Frattini: Admittedly, that is a long time. But investigations in the case of international crimes take a long time. To me the most important thing is that terrorists can be brought to trial. Look at Spain: It took more than three years there before the bombers in Madrid were convicted.

SPIEGEL: A member of the Commission apparently said before an European Parliament committee that the data could also be used to clear up simple cases of theft.

Frattini: That doesnt correspond to the Commissions conception. At the most, I could imagine also using the data in the case of cross-border crimes such as child abuse. Who could object to us fighting pedophiles by evaluating their data?

SPIEGEL: But where is the limit, then -- and doesn't the danger remain that the data could be stolen? In Great Britain this autumn, the tax authority lost two CDs with data on 25 million citizens.

Frattini: You can rest assured that the data will be well-protected. I am also willing to initiate legal sanctions to punish any misuse. And there's one thing you shouldn't forget: The problem is not data storage, the problem is terrorism.

SPIEGEL: You dont think that terrorists are resourceful enough to get around such tracing methods? They can simply travel by ship or by train.

Frattini: That is indeed a problem, and we need to keep up the pace on that as well. Airplanes are just the first stage. In the next stage we need to concern ourselves with trains. You know that one of the attackers in London in 2005 was able to escape through France to Italy by train. That is proof that we need new technologies that can monitor train passengers, as well.

SPIEGEL: And how would that work?

Frattini: With video surveillance, for example, as we already partly have in some train stations and buses. And of course we cant forget ships. Installing such a comprehensive system of surveillance on transportation routes will not happen overnight.

SPIEGEL: But the Commission wants this in the long run?

Frattini: Europes goal must be complete protection at the outer borders and free movement within the Union. However, we also need to have the ability to catch criminals. Europe has enormous territory that offers borderless freedom of movement. We have to keep criminals from exploiting this freedom.

SPIEGEL: Within the European Commission, you are responsible not just for security but also for freedom. If the Commission really achieves this surveillance of ships, trains and airplanes, you will perhaps increase security -- but what will be left of freedom?

Frattini: The first freedom is to be alive.

SPIEGEL: And for that you need to store what seat I had on an airplane for the last 13 years?

Frattini: Yes, that may be necessary. Years ago, the Americans didnt allow a passenger onboard an airplane because they found suspicious information in their databank. Five years later, a finger of this person was found in Afghanistan, where he had committed a suicide attack. Without the knowledge of certain data, he would have been allowed into the United States.

SPIEGEL: The various interests of the member states often impede better cooperation within the EU. You yourself once warned of the one-way street of national egotism. Is Europe really ready for a common interior and judicial policy?

Frattini: When I took office three and a half years ago, the situation was completely different. The countries were not in agreement about basic policies, such as migration policy. Today we have the shared border protection agency Frontex and a fund for the integration of third-country nationals with over €800 million ($1.25 billion) in support measures.

SPIEGEL: But in recent days weve seen that many problems remain. The Czech Republic has just come to a visa agreement with the United States against the wishes of the EU; Germany complains that other countries are not consistent in their handling of tax evaders -- not to mention EU partners Switzerland and Liechtenstein.

SPIEGEL: The EU has 27 members and will certainly continue to grow. Can a unified "area of freedom, security and justice" as the EU promises, really emerge from so many different countries?

Frattini: Of course that won't happen overnight. But we have already achieved a great deal: freedom of movement within the Schengen area, extensive cooperation in police matters and great progress in civil rights. At the same time, we need to look into the future and consider how Europe should look in 15 or 20 years.

SPIEGEL: Will we all just be EU-citizens and no longer Italians or Germans?

Frattini: No, Im a great advocate of local and national traditions. I consider myself first a Florentine, then a Tuscan, then an Italian, then a European. It is an additional benefit to be a citizen of the European Union. But we are not going to experience a fusing of the German and Italian people.