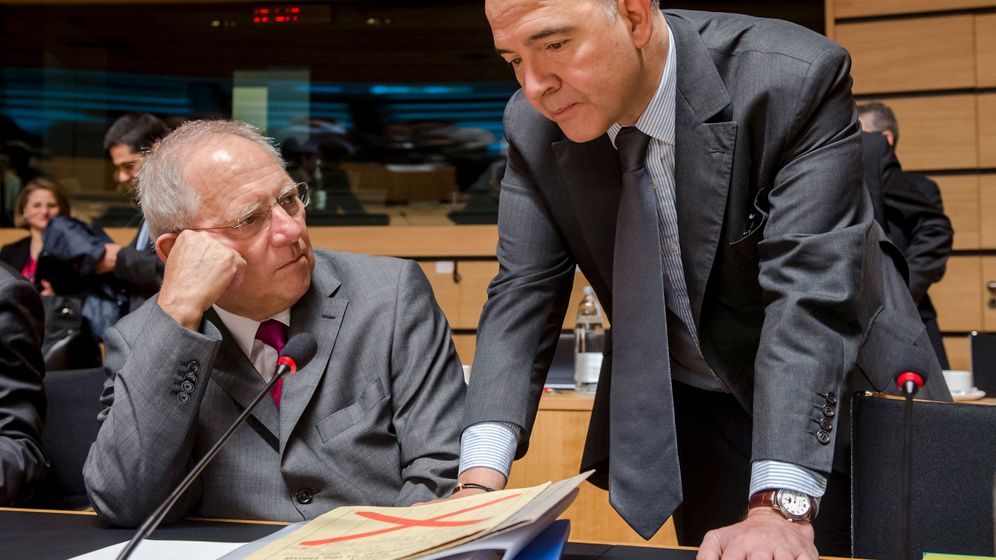 Photo Gallery: 'Schäuble and I Clicked Right Away'

French Economics and Finance Minister Pierre Moscovici greets the journalists in a small lounge inside the Economics Ministry in Paris' Bercy district, with a view of the Seine River and a table set for lunch. In true French fashion, Moscovici likes to conduct his interviews over a meal. The menu on this day consists of lamb skewers and mousse au chocolat. The economics minister has just returned from Elysée Palace, where he discussed austerity measures with President François Hollande. Right after the interview, he'll be heading to the World Economic Summit in Davos.

Moscovici, 56, had previously been considered a reform-minded politician who was unable to push his ideas through. However, following Hollande's well-received reform speech earlier this month, in which he announced planned cuts in government expenditures and non-wage labor costs, it appears Moscovici has emerged the victor.

SPIEGEL: Mr. Moscovici, can you please explain to us the difference between a Socialist and a Social Democrat?

Moscovici: To be a Social Democrat means for one to accept entirely reformist goals. And it means to count on social dialogue and on compromises to achieve them. But in their search for equality and justice, the Social Democrats still belong to the Socialist movement.

SPIEGEL: In his speech on reforms, François Hollande described himself as a Social Democrat for the first time. It was seen as a sort of coming out. Why do you think that caused such a sensation?

Moscovici: Every country wants to protect its own model, its identity. If an SPD government minister in Germany were to suddenly describe him or herself as a Socialist, it would be tantamount to that person trying to reverse the historical (SPD) party program from Bad Godesberg (in 1959, when the party disavowed itself from its previous Marxist ideology). What we have in France is a Socialist tradition. And if we now commit ourselves to Social Democracy, then we are recognizing the importance of reforms and social dialogue. It's an evolution in words, which also shows a political and ideological direction.

SPIEGEL: You have always described yourself as a Social Democrat. Did you personally contribute to the president's transformation?

Moscovici: I have known François Hollande for 30 years, since we were two young professors at Sciences Po (university in Paris). He has always been a reformer, a European and a Social Democrat. But it also true that it's a good thing to call things by their name. He has just done this and these are his political convictions.

SPIEGEL: Does that mean that France is going to become a little bit more German? And Germany, through its "grand coalition" government between Merkel's conservatives and the center-left Social Democrats, a little more French?

Moscovici: There is no German model for France in the same way that there is no French model for Germany. However, on some issues we can provide each other with mutual inspiration. For example, we are in need of structural reforms. Germany, on the other hand, might have to boost its domestic demand.

SPIEGEL: The new government is trying to do that by introducing Germany's first-ever national minimum wage.

Moscovici: We can make suggestions, but we cannot impose on each other. What's important is that we see each other constantly and talk to each other. This is also what the French-German Economic and Financial Council is about, which German Finance Minister Wolfgang Schäuble is attending. It's also the first time we're having (Economics and Energy Minister) Sigmar Gabriel. And without wanting to offend his predecessor Philipp Rösler, I believe that Gabriel will have greater weight in this function.

SPIEGEL: There have been some differences between Angela Merkel and François Hollande. So how are relations between you and Finance Minister Wolfgang Schäuble?

Moscovici: I probably see him more than I see most of my French colleagues. I am connected by a true friendship with him -- even if he says that he wouldn't vote for my party if he were a Frenchman. That is also true for me. We have an understanding of each other because we both share the same European convictions. Schäuble supported me when I had to explain in Brussels that France needed more time in order to reduce our deficit.

SPIEGEL: Did this trust exist from the very beginning?

Moscovici: Schäuble and I clicked right away. On my first real day of work at the ministry, it was Ascension Day, I immediately called him. Four days later I flew to Berlin with my people, but I told them to stay outside and spoke alone with Schäuble for 45 minutes. I told him: First, we both need a direct line. And, second: This new French government is European and it wants to reform. We exchanged mobile phone numbers and were immediately on a first-name basis.

SPIEGEL: After a difficult start, are better times now beginning for German and French relations?

Moscovici: I both agree and disagree with that. Our relationship is very good, but it could still be improved. Now that the euro zone has been stabilized, we have to go even further with the new German government. We have to think about how we can strengthen growth in Europe and we also need to implement the German-French compromise on the banking union agreed to in December.

SPIEGEL: European Parliament President Martin Schulz wants to allow the banking union to fail because he says it does not go far enough.

Moscovici: The European finance ministers have a deal that is the product of tough negotiations. We can improve it in further talks with the parliament, the European Council (the powerful body representing the leaders and ministers of EU member states) and the EU Commission, but parliament really needs to know that this agreement exists and cannot simply be derailed. It can be improved, but it must be implemented.

SPIEGEL: Germany was often accused of egoism in its approach in addressing the euro crisis -- also by the French.

Moscovici: There are concerns in Germany that I can understand. I would not call that egoism. I can understand that the Germans want to protect their public finances and their citizens' assets. I was never one of those who said: Do not worry, Germany will pay. Yet the Germans must also understand that courageous instruments aimed at mutualization (of debt) are also in their interest -- because the stronger its partners are, the stronger Germany will be.

SPIEGEL: Few are as vocal as you in defending against criticism from abroad that you find to be unjust. You even speak of "French bashing".

Moscovici: I am not Monsieur Everything Is Swell. I know the problems with our economy. And yet it is still strong - we are the world's fifth biggest economic power. I object to it when people describe us as a country in decline, a paralyzed nation that is incapable of reforming itself.

SPIEGEL: So why is President Hollande only just now making his reform announcements? Why didn't the about-face come sooner?

Moscovici: But there has not been an about-face! Our policies today are the continuation of our previous policies. We are, however, moving ahead more quickly and more forcefully.

SPIEGEL: If this isn't an about-face, then why is the opposition applauding you? And why are some leftists accusing you of pursuing right-wing policies? Nobel Prize for Economics recipient Paul Krugman has criticized the moves as well.

Moscovici: Paul Krugman is an economist who has long supported us, and I think that he will continue to recognize our efforts. The French right has dreamed of returning to power by seeing us fail, and many of their politicians are criticizing us like Pavlovian dogs. But some, including former Prime Minister Alain Juppé and Jean-Pierre Raffarin, have reacted more positively, because the most important thing is the interest of the country.

SPIEGEL: You said already in mid-2012 that you would like to reduce non-wage labor costs, but Hollande didn't react at the time.

Moscovici: In politics, there are moments. It is always easy to rewrite history and ask today why you didn't do it in 2012, or why your predecessor didn't do it in 2010 or 2005. We have been losing competitiveness for 10 years now. If we want to catch up, and do not want to continue to stay in the average in the euro zone, then we have to act now.

SPIEGEL: What concrete measures will now follow the announcements?

Moscovici: First, we are resolved to implement decisive savings in government spending. I have just come out of a meeting of the new expert council for public expenditures that the president invited to Elysée Palace for the first time today. We plan to save €75 billion ($102 billion) within this five-year term and reduce the ratio of government expenditures to gross national product from a current level of 57 to 53 percent. Second, we are reducing non-wage labor costs more massively than ever before. Third, we will reform the corporate tax to create a more favorable environment for job creation and investment. Fourth, we will remove many complicated regulations for businesses.

SPIEGEL: Instead of publicly railing against entrepreneurs, you now want to work together with them?

Moscovici: We still quarrel sometimes. If everyone is now going to compare us with Gerhard Schröder, who surely did a lot for Germany, then I have to say: I do not view myself as the "comrade of the bosses" (a term used by Schröder's political enemies to describe his business-friendly policies). I am the minister of businesses.

SPIEGEL: Are you concerned about the kind of mass protests for which France is famous?

Moscovici: Many underestimate just how aware the French are of our need for change. It also depends on how one tackles it. For example, we undertook a pension reform and there were few protests.

SPIEGEL: Perhaps because many experts consider your pension reform to be puny.

Moscovici: That is not true! We have decided on more reforms in the past 20 months than our predecessor -- in the areas of labor market, pensions and vocational training, for example. Labor unions and employers have accepted them, and that is a new method for France.

SPIEGEL: Is it not possible that your reform program could drive voters to the right-wing populist Front National during the upcoming elections for the European Parliament in May?

Moscovici: I know the folks well who vote for the Front National. Why do they do it? Because they are afraid that the country is in decline, that our industry is collapsing. The best response to this party is for us to get the economy moving again.

SPIEGEL: It was not only President Hollande's reforms that surprised the world. Many were also surprised by revelations about his affair with an actress. Did that damage him in France?

Moscovici: Not at all. In surveys, more than three-quarters of all French people say that what is private should remain private. Personally, I think this is a very healthy reaction.

SPIEGEL: Mr. Moscovici, we thank you for this interview.

2 Bilder Photo Gallery: 'Schäuble and I Clicked Right Away' 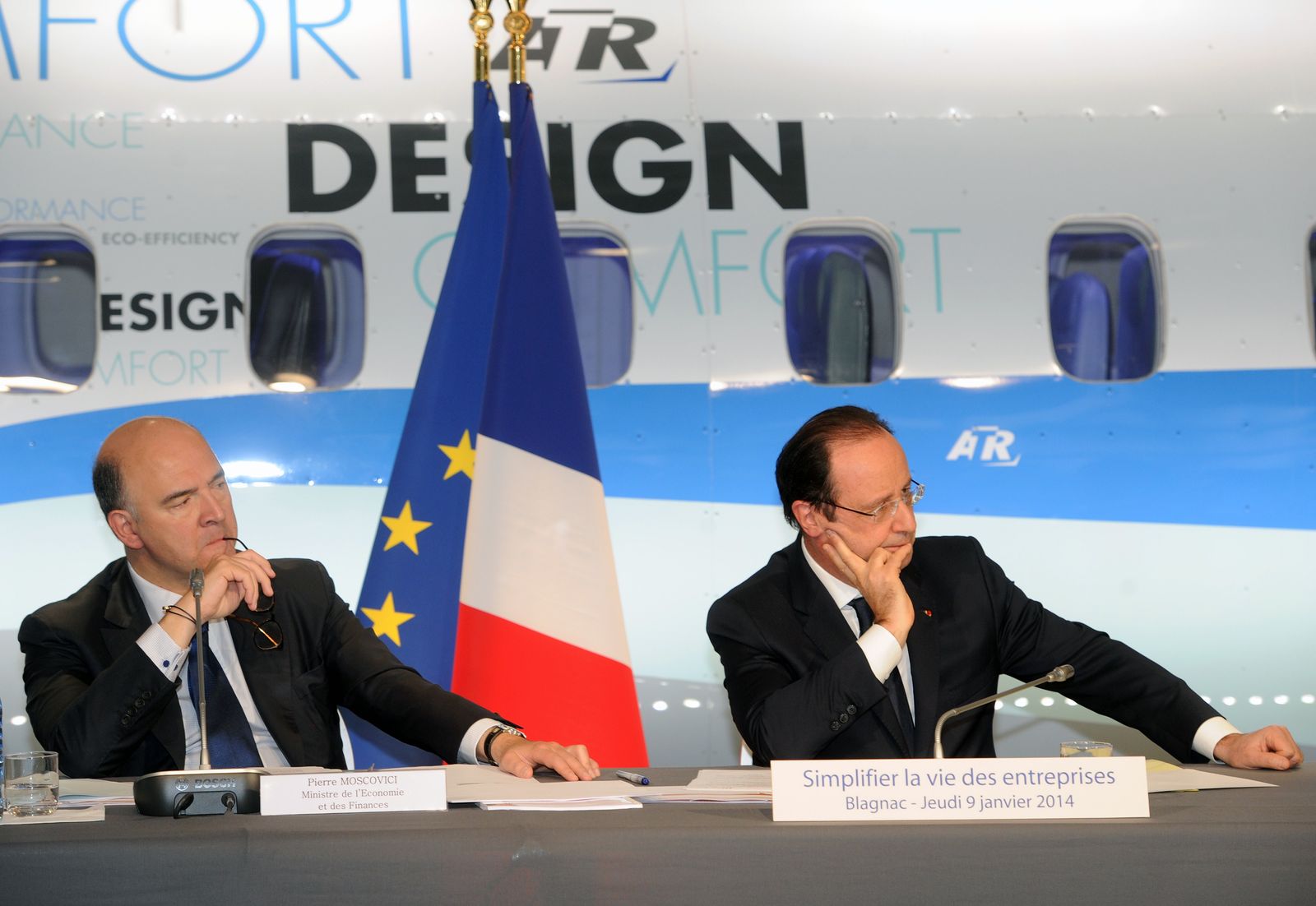 Here, Moscovici and Hollande (R) are seen at the headquarters of European aircraft manufacturer ATR in Blagnac, France, earlier this month. "Now that the euro zone has been stabilized," Moscovici said, "we have to go even further with the new German government. We have to think about how we can strengthen growth in Europe."