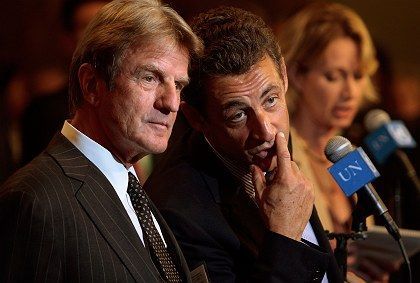 French Foreign Minister, Bernard Kouchner (left) and French President Nicolas Sarkozy: "He gives me all kinds of latitude to act and do as I see fit."

SPIEGEL: Mr. Minister, is our impression correct that there is trouble in Franco-German relations -- despite kisses on the cheek between President Nicolas Sarkozy and Chancellor Angela Merkel?

Kouchner: I don't believe that there is trouble. Friends don't have to agree on all issues. For example, we are indeed of different opinions when it comes to nuclear power, but that's normal. We agree on all fundamental issues.

SPIEGEL: And yet officials in Berlin complain that their friends in Paris are claiming every diplomatic success as their own. One example is the release of the five Bulgarian nurses from a Libyan prison. Is it only the style of French foreign policy that has changed, or is it also its substance?

Kouchner: Yes, there is a new style. During the campaign, Sarkozy promised to do what he could for the imprisoned Bulgarians. Everything happened very quickly in the end, which may have seemed abrupt. Of course, (German Foreign Minister) Frank-Walter Steinmeier and (European Commissioner for External Relations) Benita Ferrero-Waldner made important contributions. But Sarkozy and Libyan leader Moammar Gadhafi settled the matter in one decisive evening.

SPIEGEL: Sarkozy baffles the Germans with statements like: "If France doesn't assume the leadership role, who will?" Doesn't Paris have any confidence in the Germans?

Kouchner: On the contrary. The Germans have often been the leaders. (Former President Charles) de Gaulle once said: "Nothing can be built without Germany. That is its fate." When it seemed that our foreign policy was crippled as a result of the campaign, Berlin took the leadership role in Europe. In return, we helped with the Constitutional Treaty. The fact that I increasingly use the word "we" when I talk about the Germans shows how closely we cooperate.

SPIEGEL: Does the new French government still support Germany's effort to secure a permanent seat on the UN Security Council?

Kouchner: Certainly. However, it will depend on the reform of the Security Council. It is clear to us that Japan and Germany deserve a seat. There is also need for more equitable representation for the emerging nations of Africa, Asia and Latin America.

SPIEGEL: The treatment of Iran's nuclear program is still causing tensions between Berlin and Paris. You accuse the Germans of being too soft on President (Mahmoud) Ahmadinejad for economic reasons.

Kouchner: Germany and Italy have bigger economic interests than we do. In other words, more server sanctions would not affect all countries equally. I want us to weather the crisis together. We should not act too hastily. Our actions must remain transparent. We cannot leave it at the sanctions. Instead, we must continue to negotiate. The goal is peace.

SPIEGEL: Your German counterpart, (Foreign Minister Frank-Walter) Steinmeier, expects the Security Council, including the Russians and the Chinese, to take a unified stance against Iran. You, on the other hand, want to see EU sanctions that go beyond the scope of the UN sanctions.

Kouchner: I have just come from the meeting of the General Assembly, where we -- thanks in part to France's active support -- preserved the unity of the Group of Six: Germany, Great Britain, France, Russian, China and the United States are acting in concert. The key issue is whether we should supplement the UN effort with additional European sanctions.

SPIEGEL: A question you just answered in a letter of proposals to your 26 EU counterparts.

Kouchner: In New York, Frank, (US Secretary of State Condoleezza Rice, British Foreign Secretary David Miliband and I discussed more effective punitive measures. Nothing has been decided yet.

SPIEGEL: Do you truly believe that sanctions will prevent Iran from nuclear armament?

Kouchner: Admittedly, three UN resolutions have not done anything so far, which is all the more reason for tougher action now. We want to target the regime's economic and financial nerve centers, not the Iranian people. Will sanctions alone be sufficient? I don't think so. They have to be accompanied by political offers.

SPIEGEL: If this doesn't work there could be war. You said it yourself. 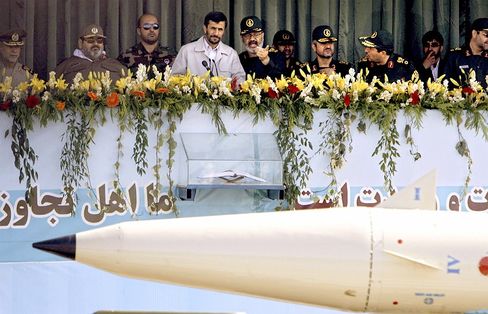 Iranian President Mahmoud Ahmadinejad (center) attends a military parade in Tehran: "We want to target the regime's economic and financial nerve centers, not the Iranian people."

Kouchner: Wait a minute. What I said was: "War would be the worst possible thing." And that's what I am determined to prevent, through unremitting negotiation.

SPIEGEL: It's nice that you set it straight.

Kouchner: It's important to me. I'm not a warmonger. I have been fighting for peace for the past 40 years. I have seen the wounded and the dead, at the front, under fire. I know what I'm talking about.

SPIEGEL: Nevertheless, the word "war" has made the Germans uneasy.

Kouchner: I understand that this word scares the Germans. But I don't want to hide behind diplomatic niceties. You will not hear me making bizarre statements like "high-intensity conflicts." The Americans mention "surgical strikes." My goodness!

SPIEGEL: Is there a risk that the United States could go it alone militarily?

Kouchner: Many believe it's a possibility. This is all the more reason for us to negotiate persistently, even if it means accepting setbacks. We need a political solution, not a military one.

SPIEGEL: You have offered to fly to Tehran for negotiations. Your president is opposed.

Kouchner: He doesn't believe this is the right time yet. But my offer remains on the table. I speak with the Iranians often, and I hope that the conditions for such a trip will soon materialize.

Is France Abandoning Its Role as a Counterweight to the US?

SPIEGEL: In the controversy over Iran's nuclear ambitions, in particular, Sarkozy has proven to be US President George W. Bush's most reliable supporter. Is France steering into the US camp?

Kouchner: Certainly not. But our foreign policy is no longer based on anti-Americanism. We are friends and allies of the United States, but not vassals.

SPIEGEL: What happened to France's traditional role of serving as a counterweight to the United States?

Kouchner: Take climate protection, for example. We don't agree with the Americans at all on that front. President Sarkozy made this very clear to George Bush (at the G-8 summit) in Heiligendamm. And he repeated it during his summer vacation in the United States, when he visited Bush in Kennebunkport. Here's another example: We invited Hezbollah to our conference on Lebanon, even in the face of severe criticism from the Americans. Nevertheless, we continue to insist that anyone who wants to solve Lebanon's problems must talk to all parties.

SPIEGEL: Now Sarkozy even wants to see France rejoin NATO's military command, which President Charles de Gaulle left in 1966 out of protest against the Americans.

Kouchner: We already provide troops for all NATO operations, from Kosovo to Afghanistan. And yet we do not have an equal voice in the military decisions that are made at NATO headquarters. The president wants to see a reorientation of NATO. Of course, this is portrayed as a pro-American gesture.

SPIEGEL: Which isn't surprising. Isn't it a contradiction to promote the European security and defense policy on the one hand, while at the same time demonstratively pushing for a return to NATO?

Kouchner: That's precisely why we stress the overriding importance of a stronger European defense. All EU partners must contribute more financially to this effort, just as we are.

SPIEGEL: What preliminary conditions would the Americans have to fulfill?

Kouchner: The Americans must accept that we act independently. We envision a Europe that is strong and plays a decisive role in all decisions worldwide. French and European interests are at the forefront. Our view of the world is not that of the Americans. Our perspective is absolutely multipolar. That is the fundamental difference.

SPIEGEL: Then let's take a look at other regions of the world. While Sarkozy says nothing about Guantanamo, he criticizes the disregard for human rights in (President) Vladimir Putin's Russia

Kouchner: But you can't compare the two. I am certain that the president is quite capable of commenting on Guantanamo with the same directness. Believe me, Sarkozy doesn't talk like a 19th-century diplomat. He says what he thinks. 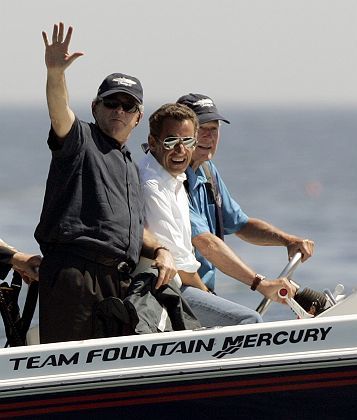 Former US President George H.W. Bush (right) takes US President George W. Bush (left) and French President Nicolas Sarkozy for a boat ride in the waters off Kennebunkport, Maine. "Our foreign policy is no longer based on anti-Americanism," Kouchner says. "We are friends and allies of the United States, but not vassals."

SPIEGEL: You yourself made your position clear when you visited the editorial staff of murdered journalist Anna Politkovskaya in Moscow.

Kouchner: I'm proud of that. I met with her son and gave her newspaper an interview.

SPIEGEL: A provocation for the Russian government.

Kouchner: The point was to pay my respects, not to provoke. After 40 years as a human rights activist, I cannot simply toss my moral principles overboard, just because I am now the foreign minister.

Kouchner: I dont think so. I respect our Russian friends and admire their reform efforts. We have to understand them. Sixteen years have passed since the collapse of the Soviet Union -- this isn't enough to change a country completely. After transitioning to a market economy, Moscow is now catching up and wants a suitable position in the world. It feels that it is being excluded and is not getting the respect it deserves. I can understand that.

SPIEGEL: You can understand the Russians constantly feeling offended?

Kouchner: Moscow must be included as a partner in all decisions, from the beginning. Russia is not an entity that one can ignore and dismiss out of hand.

SPIEGEL: We see this in the dispute over independence for Kosovo, which Russia has blocked in the UN Security Council since 1999.

Kouchner: That's why France has called for a new round of negotiations -- now that we have convinced the Americans.

SPIEGEL: These negotiations are scheduled to end on Dec. 10. Do you believe that an agreement will be reached?

Kouchner: The chances are about 10 percent. The Kosovo Albanians would have to agree to a form of independence that wouldn't make the Serbs appear as losers. This sort of compromise is hard to imagine. But there is still a chance. We have confidence in (German) Ambassador (to Great Britain) Wolfgang Ischinger (who is the EU's mediator on Kosovo) to take the bull by its horns.

SPIEGEL: The recognition of a sovereign Kosovo threatens to divide Europe once again.

Kouchner: We are unlikely to achieve unanimity among all 27 countries. I am very concerned that Kosovo not become a crucial test for Europe. This would be a gesture of brotherhood. Russia and American may take different positions, which I can understand. But this is mainly a European problem. We decide.

SPIEGEL: Why did Kouchner, a socialist, offer his services to a conservative president, of all people?

Kouchner: I was convinced that constantly criticizing is counterproductive. I wouldn't have accepted any position other than that of foreign minister. I asked Sarkozy whether I would have political free rein -- under his leadership, of course. He said I would, and this agreement has remained in place.

SPIEGEL: Does your hyper-president, Sarkozy, give you any latitude?

Kouchner: He gives me all kinds of latitude to act and do as I see fit.

SPIEGEL: Your recent jog through New York's Central Park with the president wasn't part of your job?

Kouchner: I have been running for 35 years, and I have already completed 10 marathons. I don't need Nicolas to take up running.

SPIEGEL: Mr. Minister, we thank you for this interview.