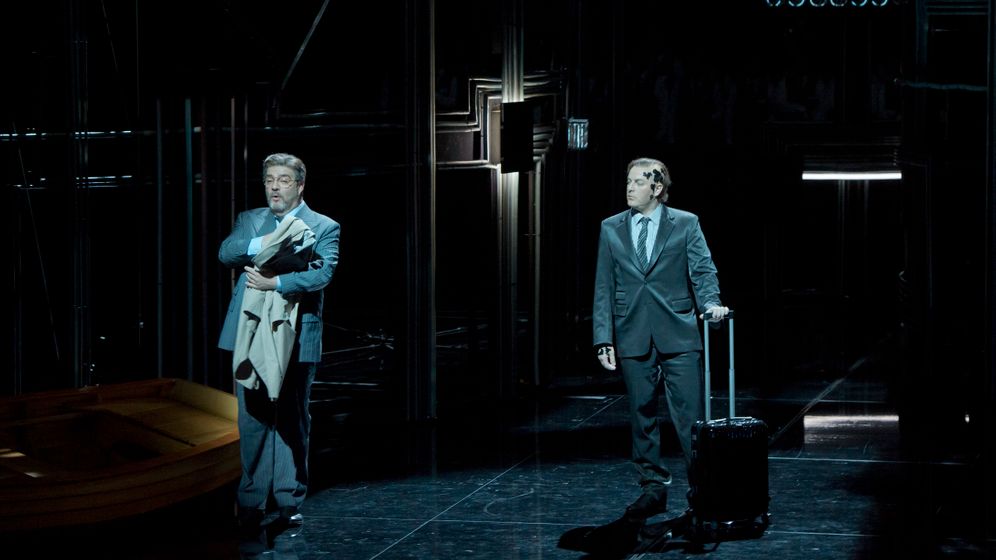 Russian bass-baritone Evgeny Nikitin was slated to play the title role in Richard Wagner's opera "The Flying Dutchman" at this summer's prestigious Bayreuth Festival in southern Germany. But just days ahead of opening night, German broadcaster ZDF reported that the singer had had a swastika tattooed on his chest in his youth while playing drums for a heavy metal band.

He left the festival before the dress rehearsal after speaking with co-directors Katharina Wagner and Eva Wagner-Pasquier.

SPIEGEL: Mr. Nikitin, why did you leave Bayreuth in such a hurry?

Nikitin : My mistake was meeting with journalists too often. They examined me like an insect under a magnifying glass. That upset me. Then somebody just waited for the best time -- late at night before the dress rehearsal -- to make a big scene about my old tattoo. There was no time for me to explain. We had to decide quickly, and so we decided to part ways.

SPIEGEL: Were you pressured to leave?

Nikitin : No one forced me to do anything. Together, we, the event managers and I, reached the only proper decision. After all of the allegations it was impossible to appear on stage.

SPIEGEL: Were you aware of the Bayreuth Festival's past associations with National Socialism? Did you know Wagner was a known anti-Semite and Hitler was often a guest there?

Nikitin : Of course I know the history of Bayreuth Festival and Wagner's personal views. But that doesn't stop people the world over from listening to his music.

SPIEGEL: You now say in a press statement that the tattoo did not represent a swastika. What was it then?

Nikitin : Getting a tattoo is a long and painful process. Tattoos that cover large areas of skin are done in stages, as was mine. The stage of work seen in the images from 2008 that ZDF used were just the beginning. The video shows thick, broad lines that one could construe as a swastika. In the meantime, it has come to look like an eight-point star -- just as I always wanted.

SPIEGEL: That is nothing but an attempt to protect yourself.

Nikitin : Believe me, I attached no meaning to the fact that the tattoo's contours looked similar to a swastika in the early stages.

SPIEGEL: Why don't you just admit that it was youthful mistake?

Nikitin : I don't care if anyone believes me. I have nothing to add.

SPIEGEL: If it was all just a misunderstanding, why didn't you clarify everything at once instead of leaving Bayreuth?

Nikitin : Before they began spreading this filth about me, they should've consulted me instead of using the old film footage. Maybe I would have had something interesting to say. I told the Wagners that my tattoos were not finished in 2008. But no one wanted to hear the truth amid the scandal.

SPIEGEL: You said that a failure in Bayreuth would destroy you. Are you now planning on giving up your career?

Nikitin : The death metal singer Glen Benton also once promised to take his life at 33, but he is still alive today.

SPIEGEL: Were you not aware that people in Germany would be sensitive to allusions to the Nazi era?

Nikitin : Look at the logo of the American band KISS. They have been doing business for 40 years with the emblem of the SS. Questions regarding National Socialist symbolism should please be directed to them first, and to me only afterwards. Compared to them I'm a choirboy.

SPIEGEL: You were a drummer in a heavy metal band. How does a rocker become an opera singer?

Nikitin : In my youth I played rock music. It was the best way to kill time. But fate made an education in classical music available to me. I have taken advatage of the chances it has opened up and I am happy I have done so.

SPIEGEL: Are you losing money as a result of the Bayreuth affair?

Nikitin : I beg your pardon! It is a completely ordinary situation. A singer cancels an appearance, so what? One might be sick, the next has family problems or his beloved dog dies. One can't earn all the money in the world anyhow.

SPIEGEL: Have there been further cancellations as a result?

Nikitin : There have been neither cancellations nor new offers. But I am prepared for anything.

SPIEGEL: What have you learned from the affair?

Nikitin : I will reduce my contact with journalists to a minimum. DER SPIEGEL is the last publication I will speak with.