SPIEGEL: Do you, like European Commission President José Manuel Barroso, support the introduction of euro bonds in order to steer Europe out of the crisis?

Prodi: The European Central Bank needs to play a proper role in the crisis and euro bonds also need to be issued. Together with my colleague, I proposed bonds that are to be guaranteed by the state's gold reserves and other funds.

SPIEGEL: And what effect would these measures have?

Prodi: Think about one thing: Why is it that nobody attacks the dollar? Looking at the United States budget, the dollar is in a much worse situation than the euro. The debt state of California is much worse off than the Greek one. But the dollar is defended, also by the Fed. That makes the dollar a big, strong dog. And nobody bites a big dog.

SPIEGEL: Could the euro become a big dog, too?

Prodi: If there is the political will. Look, Germany has a really powerful position right now. Germany is the new China.

SPIEGEL: Surely that is an overstatement.

Prodi: Let's take the German-French summit. By now it is a German-German summit. You cannot say it loudly, but it is true: Chancellor Merkel, in the end, is obliged to dictate the rules.

SPIEGEL: So you are convinced that the German attitude towards euro bonds has to change in order to solve the euro crisis?

Prodi: Germany has to take a decision for Europe, or the game is over. But I don't think there is anyone in Germany who is willing to give up Europe.

SPIEGEL: You are very optimistic about the idea that the crisis can be overcome. Where does that optimism come from?

Prodi: Rationality will assert itself. Germany cannot give up its fantastic economic situation in the world.

SPIEGEL: The economic situation in Italy is more of a cause for concern. Suddenly, though, after years at a standstill, everything happened very fast: Former Prime Minister Silvio Berlusconi resigned, the technocrat cabinet of Mario Monti passed a confidence vote -- all in the course of one week. Has there been a change the country?

Prodi: It all went too slowly. Italy is in the midst of a deep crisis that should not have come to this point. Berlusconi simply had to leave.

SPIEGEL: Did he really leave?

Prodi: I'm not so sure about that. After my resignation from the office of prime minister, I simply went back to my hometown Bologna. He instead gives constant statements demonstrating his will to leave the door open for a possible return to the political stage.

SPIEGEL: He has said he would like to return "with double power."

Prodi: Indeed, he seems to be more active in politics today than when he was the prime minister.

SPIEGEL: Could he become dangerous for his successor Monti?

Prodi: Not at the moment -- Monti is too highly regarded for that. But Berlusconi won't give in. He has lost his magic, but I am convinced he will try again.

SPIEGEL: Are you afraid of that?

Prodi: You cannot imagine how I have suffered in the last years. Wherever I went, it was all "bunga bunga". In Beijing, they laughed at my wife and I. Even in Kenya, the park rangers pointed at the monkeys in the trees and said, "Look, they are doing 'bunga bunga'."

SPIEGEL: Is the momentary resignation of politicians to make way for an expert government the right solution for Italy?

Prodi: For the next months for sure. We have two personalities who can give the markets guarantees of rational behavior. The one, Mario Draghi, is chief of the European Central Bank. The other is prime minister. Both are excellent economists and Europeans who are widely respected around the world.

SPIEGEL: Will that be enough to convince Italians that it is necessary to make sacrifices in order to emerge from the crisis?

Prodi: It is less about the cruelties and more about changing structures and liberalizing markets. I struggled to do so in my time as prime minister and I had to face huge difficulties in parliament.

SPIEGEL: In Greece, efforts to change the structures and mentality of a country also haven't worked out so far.

Prodi: You cannot compare the two. We don't have to shrink the salaries of our public employees by 30 percent. Our budget deficit in 2012 will be only half as big as the French one. We do, however, need a strong government, and we did not have it until now. Besides, we have two problems that differentiate Italy from the other European states: widespread tax evasion and a shadow economy.

SPIEGEL: You are talking about corruption and the mafia.

Prodi: Think about the murders in Duisburg and you can see just how ominous Italy's organized crime is capable of being. We have to act quickly in these areas.

SPIEGEL: Tax evasion is not so easy to eliminate.

Prodi: My experiences in that regard have been different. When I was prime minister, the tax income was raised simply by announcing that we planned to fight tax evasion. The laws were not even ready at the time. What is needed is a credible determination.

SPIEGEL: Despite the change of government, market pressure on Italy hasn't decreased. Why?

Prodi: This illustrates that the crisis is not about Italy anymore. Sure, Italy is a weak point in an overall crisis. And when I was in Washington two weeks ago, it was embarrassing for me to hear that the weak point of world finance was Italy.

SPIEGEL: Do you not agree with that?

Prodi: It is difficult for me to watch when, for example, a company like Siemens comes to Italy to hire away engineers in order to bring them to Germany because their qualifications are excellent. I myself have two nephews who completed their doctorate degrees in Italy and are now working in Germany. Two more are working in France.

SPIEGEL: In that sense things have not changed that much since the 1960s, a time when many Italians emigrated to Germany.

Prodi: Back then it was the poor people who left Italy. Today it is the highly educated part of the country that leaves. It is an immense drama. But the enduring nervousness of the markets shows that this has now become an attack aimed at the euro. If we had acted with more decisiveness two months ago, we would have overcome the crisis by now. But now it is too late for small steps -- and whether or not we can change the course will depend on the next (EU) summit (on Dec. 9).

SPIEGEL: What needs to be done?

Prodi: To satisfy the markets, we need an act of solidarity in European politics.

SPIEGEL: Does that mean that Germany has to pay? Either through euro bonds that will live on Germany's creditworthiness, or by the European Central Bank buying up government bonds on a large scale, which could lead to inflation?

Prodi: It depends on Germany. We need the political will to resolve the crisis. Of course I know that the Germans are afraid they will be the only ones who pay.

SPIEGEL: It is understandable. By now, Chancellor Angela Merkel appears to be completely isolated, with all partners exerting huge pressure on her. Will that be effective?

Prodi: That is the way politics works. But let's be rational. Is Germany better off with the euro or without it?

SPIEGEL: With the euro.

Prodi: Sure. The return of the deutsche mark would lead to its revaluation and exports would collapse. If the euro really were to break apart, it would be like a volcanic explosion. Nobody knows where the stones would fall.

SPIEGEL: On the other hand, the prospect of large-scale inflation ...

SPIEGEL: How is Europe going to change as a result of the crisis?

Prodi: Europe has always become stronger through crises. But the next Europe will look different. There will be some states that will collaborate ever more intensely. And there will be states that, step by step, will claim more exceptions for themselves and will be looking for something like a Europe à la carte. The core of Europe will take more and more decisions together, while the others will be more and more on the rim of it.

SPIEGEL: In other words, a two-speed Europe?

Prodi: It could even be more than two speeds. But for the future of Europe, we have to keep our fingers crossed and hope that it will not have the same destiny that was designated for Italy in the Renaissance.

SPIEGEL: You mean a Europe that is fragmented and no longer competitive in the world?

Prodi: Venice, Florence, Milan, Genoa -- these cities once dominated the sciences, arts, military and the economy and paved the way for the first globalization of the world. And then, because they were divided, they allowed other powers such as Spain and France to surpass them. Today it is not only Europe and America that are driving globalization, but also China and other Asian powers.

SPIEGEL: And you fear that the European Union could be left behind?

Prodi: Yes, there are signals of that. The EU may still be No. 1 in terms of gross domestic product, the exporting sector and industrial production. But in the Middle East, people are already asking this: If you are excellent in so many areas, then why do you not have any authority? Why don't you have any power? That is an unbelievable situation. 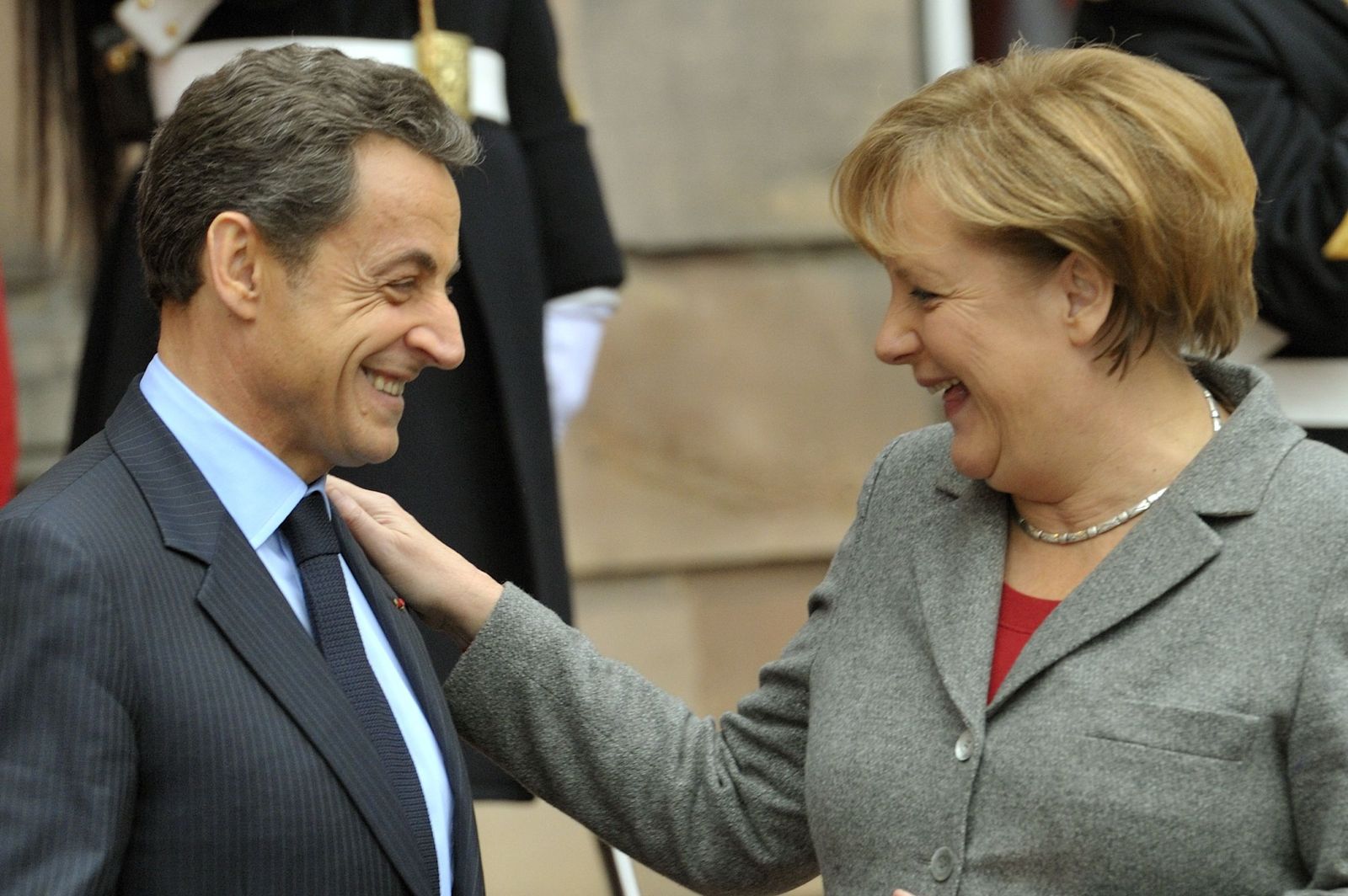 Political partners Sarkozy and Merkel: "Chancellor Merkel, in the end, is obliged to dictate the rules."