SPIEGEL: Mr. Prime Minister, when you took office in February, you compared your mission to that of a kamikaze pilot. How close are we to a crash?

Yatsenyuk: I was recently asked the same question by Chancellor Angela Merkel. I answered that I am sitting on a ticking time bomb. She said: "Previously, you said you are a kamikaze pilot, and today it's a ticking time bomb, so things have improved."

SPIEGEL: Is the situation so hopeless that one must resort to gallows humor?

Yatsenyuk: Not hopeless, but complicated. We are not only facing economic disaster and the question of peace and war. Ukrainians are traumatized by this Moscow-led aggression that has cost the lives of 5,000 people.

SPIEGEL: Is the West doing enough to support your country?

Yatsenyuk: The West is doing what it can.

Yatsenyuk: The West's room for maneuver vis-a-vis Putin is limited. It is positive that the United States and the European Union show a great deal of unity. Putin did not expect that. He thought he could split the EU, but the opposite happened: The EU imposed sanctions and even scaled them up. Of course we need more financial and military aid, the supply of lethal weapons is of crucial importance to us.

SPIEGEL: NATO stated clearly that there's no military solution to the conflict. But you seem to think differently.

Yatsenyuk: A military solution would not be the best. My aim is not to start a new offensive against Russian soldiers, but to deter Russia from further aggression. The thing is that the EU is always playing by the rules. Putin is always playing with the rules. At the beginning, many thought that, after annexing Crimea, the beast would calm down. But he continued by supporting the so-called separatists in eastern Ukraine. When we started our anti-terror operation, Putin sent in regular troops. Appeasement has never worked and it won't work with Putin. Of course one can argue that Crimea belonged to the Czarist Empire two centuries ago. One can quarrel over what territory, historically, belongs to whom. But that does not give Russia the right to violate Ukraine's territorial sovereignty.

SPIEGEL: Is it helpful to label the Ukrainian military offensive as an anti-terror-operation at a point when many people in eastern Ukraine already view the government in Kiev with suspicion?

Yatsenyuk: For a long time we have been trying to win the hearts of the people in Donetsk and Luhansk. My government was ready to devote additional powers to the regions. In addition, taking into account the interest of the Russian minority, we have not moved to implement the decision by parliament on the language law and have restored the possibility for the regional councils to grant special status to regional languages, including the Russian language. But when we were attacked militarily it was our duty to defend our country.

SPIEGEL: Your government has stopped paying salaries and pensions to people in the territories not controlled by your government. It seems that you've already given up these parts of eastern Ukraine.

Yatsenyuk: That's not true. We still supply gas and electricity. That costs us $200 million per month. Those who register can receive the money in other regions. We are not able to pay salaries or refill automated teller machines because the terrorists rob the money transports.

SPIEGEL: How do you intend to make peace in eastern Ukraine?

Yatsenyuk: First we must deescalate the situation, and that is only possible on the basis of the Minsk Protocol. I am skeptical about deals with Russia, but there's nothing else we have on the table. Russia has supported and signed it. It provides that all Russian soldiers have to be pulled out. In exchange, we have promised to bestow the Donbass region with a special status and we have passed an amnesty law. The Minsk deal also stipulates that the border will be controlled by Kiev.

SPIEGEL: Is this the reason you are planning to build a 2,000-kilometer (1,243 mile) long fence along the border to Russia?

Yatsenyuk: It is also in the European interest that the border between Ukraine and Russia is well protected and illegal immigrants, weapons or drugs can no longer be smuggled via this border into Europe.

SPIEGEL: It would create an Iron Curtain between two brother people.

Yatsenyuk: I'm always very cautious about this "brotherhood" concept. Frankly speaking, I don't need such relatives who grab my land and kill my people.

SPIEGEL: What else would have to happen?

Yatsenyuk: Free elections in order to create legal regional authorities as foreseen in the Minsk deal. Then we need international donors who reconstruct our infrastructure. This strategy can only succeed if Russia withdraws entirely from Ukraine. Do I believe that Russia will do this? No, because Putin wants to retain these territories; he wants to keep his hand in our belly fat.

SPIEGEL: What are you planning to do in order to bring Putin to a compromise?

Yatsenyuk: Behind closed doors we have long thought about an exit strategy for Russia. It's clear that Putin has to find a way to save face. On the other hand, it's clear that his policies turn Putin into a drug-addicted person. His survival depends on land grabs of foreign territories. He needs new annexations. The annexation of Crimea has gained him much applause at home. But that will not last forever. The Western sanctions are beginning to take hold and the people are suffering. In order to maintain his popularity, Putin has to commit further international crimes. Otherwise he will be dead politically.

SPIEGEL: But the problem isn't just Putin -- many Russians seem to think like him.

Yatsenyuk: That worries me, yes. If 85 percent of Russians support the annexation of Crimea and the aggression against Ukraine, that is a very bad sign. The post-Soviet legacy is a heavy burden: Most Russians want to have the empire back. The only way it is possible to make that happen is to seize foreign territories.

SPIEGEL: Putin has always made clear that he objects having NATO troops located at the Russian border. Would Ukraine be ready to give up accession to NATO in order to placate Russian security needs?

Yatsenyuk: We stand firmly behind the decision made at the summit in Bucharest where it was decided that Ukraine could one day become a member of NATO. That is not only in the interest of Ukraine, but also in the interest of Europe and peace on our continent. But we also know it will take a long time until Ukraine fulfills the standards for NATO membership.

SPIEGEL: Are you not escalating the situation yourself by constantly meeting with NATO leaders, like Secretary General Jens Stoltenberg, last Monday in Brussels?

Yatsenyuk: The Russians will always find a pretext for their aggression. It was Putin who said in 2005 that the biggest geopolitical disaster of the last century was the collapse of the Soviet Union. Putin wants to bring Ukraine back into the Russian sphere of influence. That is why he tried everything in order to stop the EU-Ukraine Association Agreement.

SPIEGEL: Will Ukraine ever join the EU given the fact that the free trade agreement was put on hold?

Yatsenyuk: The EU remains our dream. We must not give it up. Otherwise Putin would win. His goal is to undermine the EU. This is not only about a conflict between Russia and Ukraine. Russia is fighting against the West and its values. Therefore, the European project of Ukraine must not fail. We know that this aim requires successful reforms in Ukraine, even if they hurt now.

SPIEGEL: You have cut social security benefits, you have fired one in 10 government officials and you have raised taxes. Don't efforts like that increase the risk people will want an authoritarian leader in your country?

Yatsenyuk: I was elected despite all these measures and I am doing everything possible in order to cushion the effects of the reforms. But serious reforms are our last chance -- we have no other option. Our strongest card in that game is a Ukrainian youth that wants to belong to Europe.

SPIEGEL: How much money does Ukraine need in order to prevent bankruptcy?

Yatsenyuk: This year we received $9 billion from the IMF and individual donor states, but we paid back $14 billion in old debts. The Ukrainian economy is shrinking this year by 7 percent and our industrial production by 10 percent. But you also have to take into account that 20 percent of our industrial production was lost due to the annexation of Crimea and that we do not yet control parts of eastern Ukraine.

SPIEGEL: Let's come back to Chancellor Merkel. Are you happy that she is leading Germany and not one of her three predecessors -- Helmut Schmidt, Helmut Kohl or Gerhard Schröder? They have all demanded publicly that Germany and the West should be more respectful of Russian interests.

Yatsenyuk: Merkel is a flagship of the EU. Not everything depends on her, but much does. I have been shocked in a positive way by how Merkel is defending international law so openly and strongly. She wants to have peace and stability in the EU, and she knows that Russia is a problem in terms of security. It seems to me that many Germans are led by a certain fear of Russia. So you hear things like, "Let's avoid conflicts with Moscow, let's appease the Kremlin."

SPIEGEL: So Schmidt, Kohl and Schröder are wrong?

Yatsenyuk: Let's put it this way: Merkel is right. The chancellor cares about the whole European project and not a special relationship with Moscow. 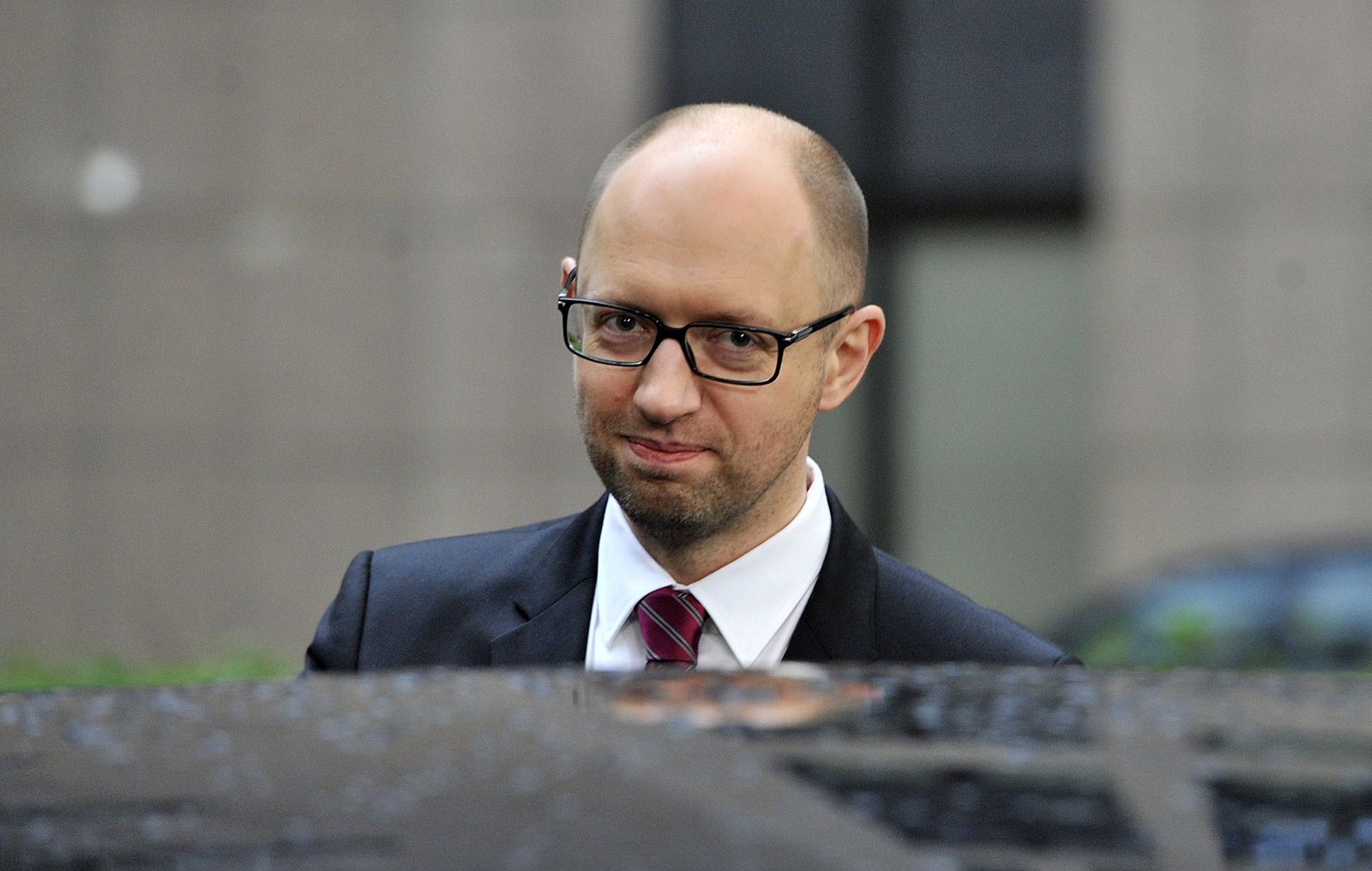 Ukrainian Prime Minister Arseniy Yatsenyuk: "Russia is fighting against the West and its values."