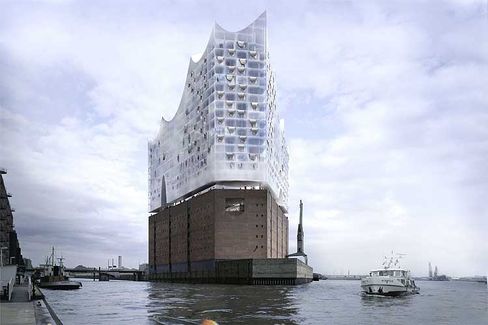 A computer-generated picture of the exterior of the Elbe Philharmonic concert hall being built in Hamburg's harbor. Landry believes buildings like this one can help to define a city.

SPIEGEL: What does a city need to have for you to feel good in it?

Landry: Contradictions, most of all, a balance between chaos and order. It needs neighborhoods vibrating with energy just as much as cozy little corners and parks; well-tended, middle-class sections as well as an alternative scene; technology centers for innovative youth and social facilities for older people. In other words, it needs creativity to retain the high performers who have lived there for years as well as to attract new, interesting residents.

SPIEGEL: Can this creativity be regulated?

Landry: Not really, but it can be encouraged. The redevelopment or revitalization of a city is an art. It depends on the individual strengths of a place and the will of the leadership to bring about change. The goal is to establish a cultural infrastructure. Creativity is also needed in the administration. There is no magic formula, no 10-point plan where you can check off items and suddenly be successful.

SPIEGEL: What in particular do city officials have to take into account, and what should they focus on?

Landry: First, they must be conscious of the international competitive situation dictated by globalization. As industries migrate toward the Far East, the future of many Western cities will no longer lie in manufacturing products but ideas and patents. Young, mobile elites can choose where they want to live, and they can easily move, which means that cities are involved in a heated competition for the best people. Only the most attractive cities can benefit from this development.

SPIEGEL: But some cities just happen to be more attractive than others, perhaps because they're on the coast or in the mountains, or their history creates a certain atmosphere.

Landry: That's true, of course. Some remain great cities, but they shouldn't stand still. They should move in the direction of a knowledge-oriented society. Most cities have to do something to draw attention to themselves and make their particular assets visible on the international radar. I'm not talking about developing countries, but about the United States and Europe.

SPIEGEL: Surely it's a tall order to attract creative people when your city has a high crime rate, collapsed infrastructure and slums?

Landry: Like Detroit, an urban hell. But even in this city of the dying auto industry, there is reason to hope, if they manage to combine the creative forces of designers and other intellectual "suppliers" in other ways. All cities have one key resource: the special abilities of the people who live in them. You just have to find out what they are. In the Australian city of Adelaide, for example, which is overshadowed by Sydney and Melbourne, I discovered a number of experts in the penal system. I advised them to work with these special skills.

SPIEGEL: Which European city is the best at utilizing its particular human resources?

Landry: I like what Barcelona is doing. This city almost perfectly combines its natural advantages with cultural attractions, IT parks and first-rate educational opportunities. The same applies for Dublin, which manages to achieve a blend of complexity, tolerance and artistry and makes a point of not devoting every part of the city to the tourism industry. Sometimes creativity also means forgoing short-term profits and simply saying no.

SPIEGEL: Is multiculturalism an advantage or a drawback?

Landry: It can be both. In a city like London, the fact that cultures live together and cross-fertilize is a beautiful and natural thing. The many cultures in Amsterdam contribute to the city's high level of craziness -- something which every interesting city should offer. But sometimes immigrants can live in parallel worlds which can exclude others and not be very attractive. As far as population size goes, big is no longer important, and it can even be a drawback. In fact, the future belongs more to second-tier cities. Any place can become a world-class center today by finding an area in which it outperforms others, by thinking for the long term, by expanding its competitive abilities and by operating globally.

SPIEGEL: What do you think of German cities?

Landry: Hamburg is getting a new symbol with its new Elbe Philharmonic concert hall. Such an architecturally impressive building is built somewhere in the world maybe once every five years, if you're lucky. Hamburg will have a new and important attraction with which it can distinguish itself from other cities. But the important thing is that activities should not just be limited to the building, but that the concert hall should symbolize a general mood of creative rejuvenation. Another thing I like about German cities -- and it's an advantage which they haven't sufficiently exploited yet -- is that they are pioneers when it comes to environmental technologies. And green solutions are becoming more and more important.

SPIEGEL: Are there things about Germany which you don't like?

Landry: The Germans are often too bureaucratic, too fixated on rules and not risk-oriented enough. And some of their officials have the feeling that they need to make everything in the cityscape look nice and pretty as quickly as possible. That was particularly apparent in the former East Germany after reunification. Then cities sometimes get a bit too neat and tidy.

SPIEGEL: Where do you live when you're not on the road?

Landry: I travel a lot and my job means that I'm almost always in big cities. I sometimes stay in one city for a few months for my consulting work, as I did recently in the Australian city of Perth.

SPIEGEL: But don't you need a place that you can call home?

Landry: Yes, of course. I live not too far from London, in the countryside in Gloucestershire -- in a village with just 20 houses.