What will ultimately happen with the euro? What is the way forward with Greece? The German business community is demanding expedient decisions from its politicians in Berlin.

"We're not interested in a continued debate about a Greek exit," Hans-Peter Keitel, president of the Federation of German Industry (BDI), which represents many of the country's largest corporations, told SPIEGEL ONLINE in an interview. "As a businessman, I wouldn't just let a struggling arm of my company fail. I'd restructure it. In this case, that means that Greece should become a kind of special economic zone within the euro zone, equipped with necessary and permitted financial aid, but also with the presence of foreign European Union officials."

The industry chief also sharply criticized plans by the European Central Bank to purchase the government bonds of crisis-plagued euro-zone countries. "Interest rates reflect the market; they aren't subject to some mysterious forces from outer space. They can be influenced -- particularly through persuasive financial and economic policies, through the efforts of the crisis-affected countries themselves," Keitel said.

The BDI president also argues that Germany needs to do more. He urges Chancellor Angela Merkel's government to undertake greater efforts to solve the crisis. "The government must stay productive and not pussyfoot around," he said. "Of course it is clear that there will be national elections in Germany next year, but there's lots of work left to be done -- in energy policy as well as tax and budget reform."

SPIEGEL ONLINE: Mr. Keitel, how concerned is the German business community about the economically beleaguered countries in Southern Europe?

Keitel: Of course we're worried, but things are also looking up in the economic data coming out of those countries.

SPIEGEL ONLINE: You have a sense that the negative trends are reversing?

Keitel: Yes, as far as trade balances, especially growth in exports, and unit labor costs are concerned, things are slowly getting better across the board.

SPIEGEL ONLINE: How is the situation looking for Spain and Italy?

Keitel: These countries need to finally get better about marketing their achievements. Italy and Spain need to point out their plans to beat this crisis and underscore the areas where they've already begun to see gains. That's the only way they can keep investors in their countries and convince the financial markets.

SPIEGEL ONLINE: How can Germany help these countries?

Keitel: We can help, but our means are limited. First and foremost, these countries will have to largely shoulder their problems on their own. Only they can decide if they have a future in the euro zone or not. At the moment, (Germany's) economy is still doing well, but what's going to happen in the next few months? There's no guarantee that our growth will continue. The other countries should not overburden Germany.

SPIEGEL ONLINE: There's also serious concern that France could also get swept up in the crisis. What would happen then?

Keitel: That would be very serious for the euro. We as Germans and Europeans have an enormous interest in keeping that from happening.

SPIEGEL ONLINE: What does France need to do in order to prevent things from getting that far?

Keitel: In Germany, we've implemented difficult reforms -- Agenda 2010 (former Chancellor Gerhard Schröder's tough cuts to the social system and labor market reforms), for example. That's why we must be permitted to point out to the French that they urgently need to set about implementing a few important reforms themselves -- in labor laws and reforming the pension system, for example.

SPIEGEL ONLINE: Has the chancellor made any mistakes during the euro crisis?

Keitel: Regardless of party affiliation or interests of whomever you ask in Germany, the chancellor is chastised as being too yielding. They say she should be a tougher leader. Abroad she takes a beating for exactly the opposite because she hasn't opened Germany's coffers up wide enough. She is constantly in this balancing act and, as far as I'm concerned, she's done a very good job of it. I hope that she doesn't cave to the pressure and rethink the lines in the sand she's drawn.

SPIEGEL ONLINE: In your view, what are the lines that Mrs. Merkel should not cross?

Keitel: Payments should not be made without getting something in return; there should be no solidarity without supervision. Structural reforms and budget consolidation are needed. A thoroughly planned European banking authority that is capable of acting, is for us (at the BDI) the prerequisite for any step towards a banking union -- but not shared deposit guarantees.

SPIEGEL ONLINE: How do you view the ECB's planned unlimited purchase of state bonds?

Keitel: Interest rates reflect the market; they aren't subject to some mysterious forces from outer space. They can be influenced -- particularly through persuasive financial and economic policies, through the efforts of the crisis-affected countries themselves. Bearing that in mind, I think it's fundamentally not a good idea for the ECB to buy bonds in order to correct interest rates. In any case, the yields for Spanish and Italian bonds are, on average, well under 6 percent. We have instruments like the European Stability Mechanism (ESM, the permanent euro bailout fund) to help manage the crisis, and these should be put to work and allowed to take effect -- including the restrictions imposed upon the troubled countries. That would allow the ECB to concentrate harder on its core tasks. A credible exit strategy is also important. The only way to ensure that the reform efforts of the crisis-plagued countries remain resolute is if it's clear that the ECB can stop its bond purchases at any time.

SPIEGEL ONLINE: Do you still see a possible solution for Greece?

Keitel: We're not interested in a continued debate about a Greek exit from the euro zone. As a businessman, I wouldn't just let a struggling arm of my company fail. I'd restructure it. In this case, that means that Greece should become a kind of special economic zone within the euro zone, equipped with necessary and permitted financial aid, but also with the presence of foreign EU officials. Greece doesn't need to sacrifice any sovereignty at all, but it should give its European Union helpers the chance to play a role in shaping the reforms. It's important to also think about the collateralized parties. In principal we should create a sort of hyperbaric chamber for Greece so that it recovers in the long term. For that, Greece needs time -- not just months, but years.

SPIEGEL ONLINE: Where should the helpers come from? Germany?

Keitel: The important thing is that they must have expertise.

SPIEGEL ONLINE: Would you advise a German firm to invest in Greece now?

Keitel: Who would invest in Greece right now? It's incumbent upon the business and political elite in Greece to regain the trust of investors. I can't invest in a country today when I don't know what currency it will be using tomorrow. At the same time, states in this situation have a hard time privatizing companies. The business community needs to finally be given some clarity about how things are going to proceed in Greece.

SPIEGEL ONLINE: But isn't it the elites who are taking their money out of the country?

Keitel: Yes, and that has to change. No investors are going to go into a country if the local capital is heading the opposite direction.

SPIEGEL ONLINE: How great is the danger that the German economy will contract further during the course of the euro crisis?

Keitel: The economy alone doesn't worry me. My concern is that we in Germany will lose our ambition, become content just being the engine keeping Europe on track and become enamored with the status quo. We've always made our living by being one step ahead of the others. We have to think right now about how German industry is going to remain competitive on an international stage in the next two decades. We can't just rest on our laurels and be happy with our recent successes. If that's the case, we'll quickly find ourselves overtaken.

SPIEGEL ONLINE: What are you calling on the German government to do?

Keitel: If you just fly around from one international summit to the next, there's little time left for reform efforts at home. That's not a criticism. Still, politicians have to create framework conditions that allow the business community to be competitive -- with energy prices, for example (Editor's note: Many German in German industry are concerned that Merkel's plans to eliminate nuclear power in Germany and shift to renewable sources will lead to staggering increases in energy prices that will make companies here less competitive). The government needs to make broad strokes, not fiddle about the edges. Of course it is clear that there will be national elections in Germany next year, but there's lots of work left to be done -- especially regarding energy policy, tax reforms and budget consolidation. We're experiencing a year of high tax revenues. It would have been smarter if the coalition government in Berlin had sent a clear signal about reducing its new borrowing (Editor's note: Instead, it recently announced it would borrow more money for the 2013 budget.). It's a shame that it fumbled this great opportunity.

SPIEGEL ONLINE: Finance Minister Wolfgang Schäuble has set the goal of the German government balancing its budget entirely by 2016.

Keitel: I can only report from my own business experience: No plan works out exactly as it is conceived. If this year is going great, then next will be even better -- as a businessman I learned never to think like that. 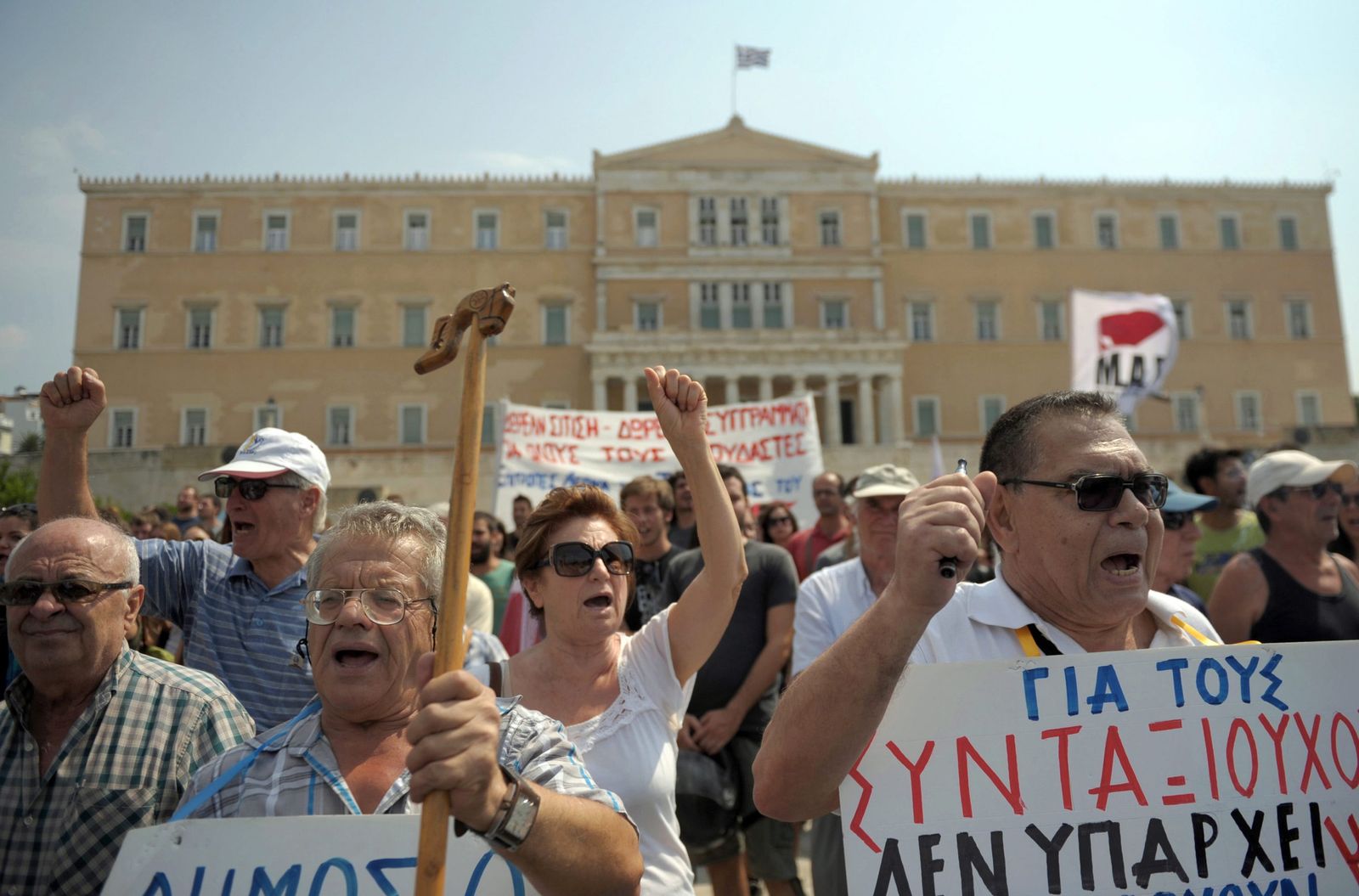 A protest in Athens: The head of Germany's largest industry association is calling for a serious rescue plan for Greece.