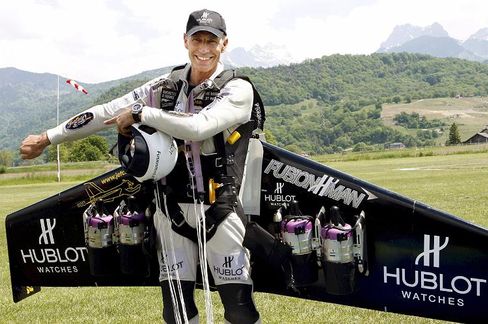 Swiss inventor Yves Rossy jumped out of a plane last Wednesday and flew with the aid of wings and a jetpack attached to his back. The five-minute flight was the first public demonstration of Rossy's invention, which he spent five years developing. The self-proclaimed "Fusion Man" spoke to SPIEGEL ONLINE about the risks and joys of flying solo.

SPIEGEL ONLINE: Your recent flight in Switzerland was spectacular. How long will it be before anyone who wants to fly will be able to?

Yves Rossy: A few more years, but it will be possible.

SPIEGEL ONLINE: You are exaggerating, surely.

Rossy: No. Getting airborne is still dangerous and complicated. But as soon as you are flying, it is totally easy.

SPIEGEL ONLINE: What is the most complicated thing about taking off?

Rossy: I have to work through a sort of check list. I put on the wings while in the plane, they weigh 55 kilograms (121 pounds). Then I go to the steps and ignite the engines. When all four are running stably in neutral then I jump. First of all I am in freefall, then it gets challenging. I have to bring my body from the nosedive up into a horizontal position and at the same time accelerate the engines. Then I can even ascend. If the engines are working well then it's easy. Even my grandmother could fly then.

SPIEGEL ONLINE: You had problems landing though ...

Rossy: Yes, you have to be able to parachute jump. There are two phases: First you have to open the braking parachute which reduces the speed, while flying at 45 degrees to the ground. Then you open the main parachute.

SPIEGEL ONLINE: What sort of physical condition does a "Fusion Man" need to be in? Does he have to have lot of strength?

Rossy: Only at the start. It's similar to diving. As long as you are not in the water you run around like a penguin with these heavy tanks on your back. Then everything is really easy once you are in the water. That is the same with flying. I fly completely relaxed, without using my muscles. If I were to tense up, then I would become instable because my body is a part of the flying object.

SPIEGEL ONLINE: How do you steer?

Rossy: Only with my body, and that is a big plus! I just make small movements. If I want to go down, then I move my head down. If I move the upper party of my body upwards, then I move upwards. If I want to turn then I turn my head and shoulders to the side. It is totally intuitive, just like a child who is playing airplane using his arms.

SPIEGEL ONLINE: Isn't it frightening to whiz through the air at 300 kilometers (186 miles) per hour?

Rossy: No! I get excited sometimes, especially trying out something new, like using a new wing.

SPIEGEL ONLINE: Describe what it feels like to fly.

Rossy: It is absolute freedom. I know the feeling of flying from various aircraft. But there was always something surrounding me that I had to control. As Fusion Man, it's like I am naked, I only have the wings that carry me. Nevertheless I do the same thing as flying an aircraft. It's like a dream. I can fly where I like.

SPIEGEL ONLINE: How much does the equipment cost?

Rossy: It difficult to say. The engines cost €5,000. Then there is the special suit, parachutes and so on. It would be between €50,000 and €80,000 ($125,000) in total. But this is a prototype. It would be significantly cheaper when mass produced. I am also going to rework the technological concept: There will only be two engines, the wings won't flap and they will be smaller. I think that the final costs will be well below €50,000. You already know how much cars cost these days.

SPIEGEL ONLINE: At the moment you start by jumping out of a flying aircraft. Will you ever be able to take off from the ground?

Rossy: I hope to be able to do that soon. It would not be possible to do it by running because I need to have a minimum speed of 150 kilometers per hour. It could be possible, for example, to start from a moving car. In fact I could do that already, but it would be far too dangerous. The minimum altitude for my parachute is currently 800 meters. I would need three minutes to get to this altitude and during those three minutes I would have no Plan B. There would be a huge risk of death.

SPIEGEL ONLINE: How would it be possible then to take off from a car?

Rossy: With a parachute that opens pyrotechnically in an emergency. Then you get to a minimum altitude of 200 meters. That is only a 10 to15 second flight. If you want to improve the performance, then the risk should be no greater than taking off in a one-engine airplane. If that were the case then I would take off from the ground.

Rossy: No, I would like to emphasize this: I am no kamikaze. Everything is checked.