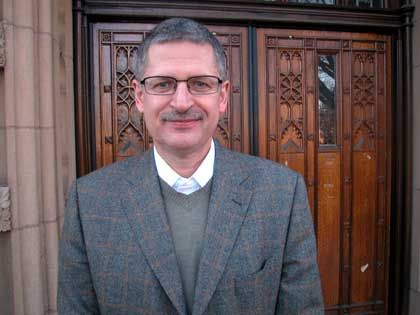 Journalist Flemming Rose: "I am thinking more about what I am doing."

SPIEGEL ONLINE: Mr. Rose, today three man were arrested who are suspected of having planned the murder of Muhammad cartoonist Kurt Westergaard. Are you surprised that, two years after the Muhammad cartoon crisis, there are still people under threat?

Flemming Rose: Unfortunately it doesn't come as a surprise to me. I have known about the threat for a while and last year three young men were convicted of conspiring to plan a terrorist act somewhere in Denmark. Part of their plan was also to attack Jyllands-Posten. And in the first phase of their planning, they also discussed killing me.

This threat is part of a new reality and it is not just a Danish case. We had a Swedish artist who received this kind of threats after painting Muhammad as a dog. And in Germany there were people arrested who planned a terrorist attack. This is a global struggle for the right to free speech, which is going on every day in different parts of the world where people are trying to intimidate and silence those who are critical of religion, of authoritarian regimes and movements trying to undermine free speech.

We have to make it very clear that on a global level people who are in favor of free speech have to unite in order to get rid of all kinds of laws around the world that limit the right to free speech -- blasphemy laws, laws protecting dictators, laws which are being used to silence people who are critical.

SPIEGEL ONLINE: Today politicians of all political parties in Denmark have declared their support for freedom of speech and several newspapers announced  they will reprint the Muhammad cartoons to show solidarity with Jyllands-Posten. What has changed in Danish society since the discussions about the Muhammad cartoons two years ago?

Rose: This is not a closed case and the debate about freedom of speech is still going on in Denmark. Several writers and other public figures who have been critical of me and Jyllands-Posten still insist that the cartoon crisis wasn't about free speech. Actually, there are still people who refuse to see the reality we are facing. But definitely the situation in Denmark has changed during the last two years. Basically I feel that time is on our side.

SPIEGEL ONLINE: In which way?

Rose: The debate about integration and about fundamental values in our democracy is far more fact-based than it used to be. The cartoons didn't create a new reality, but they revealed a reality. That reality was already there, but not everybody was willing to see it. Now this reality has become clear and we can discuss the real problems based on facts instead of some abstract thinking.

SPIEGEL ONLINE: At the end of 2005, radical Danish imams took the drawings to the Middle East. Has the Muslim community in Denmark developed since then? Is there a clearer separation between Muslims who live in accordance with Danish laws and those who do not?

Rose: This is a long process and we can't expect a change within two years. But in fact the issue is on the table, especially among Muslims. It was one of the positive outcomes of the cartoons in Denmark that a lot of Muslims felt the need to come forward and make clear that they do not identify with the radical imams who were travelling to the Middle East and who were trying to provoke public opinion against Denmark.

But still, among some Muslims there is a different sense of the importance of religious feelings, that we Christians or cultural Christians don't understand, and that belongs to the past. We have to make clear that, in a democracy, you cannot insist on special treatments of your religious feelings. That would be discrimination against non-believers. You have to accept that from time to time you may be offended by what people are saying or publishing in a newspaper, and that this is no reason for violence. Dissatisfaction can be expressed through demonstrations, letters to the editor, lobbying parliament.

SPIEGEL ONLINE: How has your life personally changed since the crisis?

Rose: The situation in Denmark is pretty calm, even though we had these cases of threats. I don't fear for my life. I am a public figure, I do not hesitate to speak out if I want to say something. But nevertheless, I am thinking more about what I am doing. When I walk around, I may be a little more observant about what is going on around me. But I don't feel that this has changed my life in a radical way -- and frankly I don't want to change my life in a radical way, because that would mean that those who intimidate me will win.

SPIEGEL ONLINE: Why was it Kurt Westergaard in particular who was under threat now?

Rose: The reason is that he made one of the most famous cartoons -- the one with Muhammad with a bomb in his turban. A cartoon which I think is very good, because it tells an important story about the fact that some Muslims have committed terrorist acts in the name of the prophet or their religion.

I understand that people have been offended by this and that some think it means that every Muslim is a terrorist, but I have spoken to Westergaard and that was not his intention. And  neither is it my reading of the cartoon. I think, on the contrary, that it is a fair description of a part of European reality that should also be subject to satire, just like Christianity, the Israeli-Palestinian conflict, the royal family and politicians.