SPIEGEL ONLINE: Are you looking forward to travelling to Berlin on Monday for the 20th anniversary celebration of the fall of the Berlin Wall?

Walesa: It's not important whether I'm looking forward to it or not. I am a politician who played an important role in the reunification of Germany and I was invited to take part in the celebration. It's not like a piece of candy handed out to a sweet little boy. 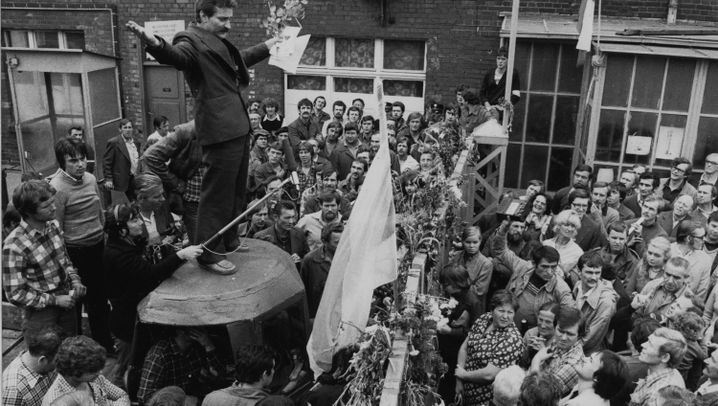 Photo Gallery: The Father of Solidarity

SPIEGEL ONLINE: The guest list in Berlin is an impressive one. Chancellor Angela Merkel is expecting numerous world leaders to attend, including French President Nicolas Sarkozy, British Prime Minister Gordon Brown and Russian President Dmitry Medvedev, among others. Surely it is an honor to be a part of it.

Walesa: The first wall to fall was pushed over in 1980 in the Polish shipyards. Later, other symbolic walls came down, and the Germans, of course, tore down the literal wall in Berlin. The fall of the Berlin Wall makes for nice pictures. But it all started in the shipyards.

SPIEGEL ONLINE: There were, of course, a number of other attempts to revolt against Soviet rule in Eastern Europe. The Hungarians in 1956. The Czechs in 1968. Why did your Solidarnosc labor union succeed where others failed?

Walesa: The communists always beat back such attempts with their superior power. And they also staged demonstrations aimed at showing their support among the population as a way of establishing legitimacy. In 1980 in the shipyards, we tried to use the communists' strategy against them. We organized the people -- including workers outside of the shipyards -- and we received support from people from other countries. The Pope, who played the most important role, arranged a collective prayer, not just in Poland but also elsewhere. We found that there were millions of us. For the first time, the communists were not able to stage a demonstration that was larger than ours. As a result, they felt weak, and this was an important element in their ultimate defeat.

SPIEGEL ONLINE: Still, even until late in the 1980s, it wasn't clear that communism was headed for collapse. Did you really believe that the Soviets would sit back and allow communist governments in Eastern Europe to be overthrown?

Walesa: The greatest fears I had came out of concern for what might be happening behind the scenes. We defeated communism, and the people in East Germany began to flee via the embassies of other countries. The Berlin Wall fell because of these deserters. I was worried that Soviet leader Mikhail Gorbachev would decide to block the mass escape and thus destroy our victory. The game was a dangerous one. It is good that Gorbachev was a weak politician and that everything went well. But that's now history so we can accept the pictures from Berlin as they are. They are indeed beautiful.

SPIEGEL ONLINE: Last week, former US President George H. W. Bush, ex-Chancellor Helmut Kohl and Gorbachev were in Berlin to discuss the end of the Cold War. Certainly Western pressure was one reason that Gorbachev didn't act to block the East German exodus?

Walesa: The politicians always told us that the Cold War stand-off could only change by way of nuclear war. None of them believed that such systemic change was possible. They now express gratitude to the people for having made the changes possible, but at the same time they present themselves as the fathers of German reunification. In truth, they were only accidental fathers of the fall of the Wall -- forced into action by the masses.

SPIEGEL ONLINE: Why were they so taken by surprise?

Walesa: Because they are true politicians. Politicians count everything: they compare the number of tanks, missiles and guns possessed by each side. And the wiser the politician was -- the better the computer model they used -- the more impossible the fall of the Berlin Wall appeared. Even today, if you were to enter the same data into a computer, the answer would be the same: no chance. But revolutionaries think differently.

Walesa: There were great changes taking place in the Soviet Union and a number of leadership changes had taken place, with one Soviet leader after another dying. Such a situation necessarily leads to some destabilization. At the same time, we began mobilizing the masses and Gorbachev didn't know what to do. He had little choice but to accept things as they were -- just shooting at the masses would not have been enough because there were too many of us. The career politicians were unable to see that.

SPIEGEL ONLINE: Many, of course, see things differently. The Americans, for example, are fond of pointing to Reagan's "Tear Down this Wall" speech as being a decisive event leading to its fall. The Russians point to perestroika.

Walesa: Normal people from Germany, Russia and the US have shown us more support. But the politicians have merely toyed with the memory of the event. That's why when I see images of Bush, Kohl and Gorbachev under the headline "Three Fathers of the Fall of the Wall," it looks more like chance to me than anything. They merely implemented the desires expressed by the people.

SPIEGEL ONLINE: Are those desires accurately reflected by the Poland and the Europe of today?

Walesa: If someone had told me before I began the struggle that I would one day live in a Poland and Europe like that of today, I would never have believed it. But even so, when I look back and see all the chances that we missed, I am not satisfied. It is something I always say: I am for it, but I am also against it.

SPIEGEL ONLINE: What sort of missed chances are you talking about?

SPIEGEL ONLINE: You haven't held a political office in Poland since your defeat in the 1995 presidential election to the ex-communist Aleksander Kwasniewski. Yet you have remained a voice in Polish politics and have at times been vocal in your criticism of Lech and Jaroslaw Kaczynski. It seems like you feel your political work is not yet done.

Walesa: There is a risk right now that we might lose the victory that we fought so hard for. The question is whether we have learned from our experiences or whether we need another whack upside the head from history. The masses learned, but after the victory the masses handed power back to the politicians. And they forget that it was we who won the victory. We might have to set the masses in motion once again.

SPIEGEL ONLINE: You count yourself as one of the masses and not as a politician?

Walesa: Yes. But I belonged to that part of the masses that fought hard for victory over communism. I risked my life. And we won this victory, but the politicians ignore it. The victory over communism came thanks to the shipyards and thanks to the Holy Father. But now, nobody mentions the Holy Father. Nobody mentions Solidarnosc. The past isn't everything, but one cannot build a future on such a foundation -- and that's why I am trying to speak up today.

SPIEGEL ONLINE: Why wasn't Solidarnosc able to continue as a political power in Poland after it mobilized the masses to bring down communism?

Walesa: One can't just replace an old system with a new one. We won and then presented our victory to our country, to Germany and to Europe. Of course it's messy, but our task was not to replace communism, rather it was to enable the development of something else. In this regard, I acted against my own self-interest. A number of political parties sprang up after the defeat of communism and I couldn't belong to them all. I could no longer play the great Walesa. Ultimately, I weakened my own power, but it was more out of choice because I didn't want my name to be equated with that of Kim Il Sung or Lenin. Thus, I had to submit to political defeat in the name of democracy. That is my fate -- the fate of a true revolutionary.