Tensions are mounting between Berlin and Pristina following the arrest of three German intelligence agents on terrorism charges in Kosovo. 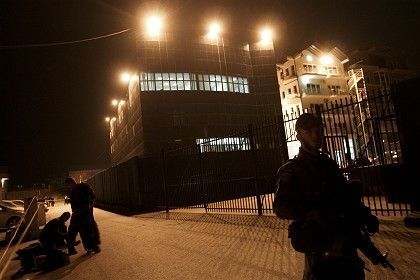 Soldiers stand guard in front of the EU office in Pristina after an explosion ripped through the building.

The three men were arrested last Wednesday on suspicion of throwing explosives at the office of the EU Special Representative Peter Feith on Nov. 14. The men who, according to SPIEGEL information, are members Germany's foreign intelligence agency the Bundesnachtrichtendienst (BND) deny involvement in the blast and claim they were only examining the scene. The explosion shattered windows in the building but no one was hurt.

On Saturday a Pristina district court judge ordered that the men be detained for 30 days on terrorism charges that could carry sentences of up to 20 years. Court documents seen by the Associated Press show that the prosecutor, Feti Tunuzliu, alleges that the suspects had intended to disrupt the EU's efforts to deploy its new police mission in Kosovo.

The German Foreign Ministry has confirmed that three German citizens have been arrested in Kosovo but declined to make any other comments due to the ongoing investigation. According to SPIEGEL sources, the BND agents had not been officially registered with the Kosovo authorities and, therefore, do not have diplomatic immunity.

The German public broadcaster ARD reports on Monday that the BND is to meet with members of parliament on Thursday to discuss the arrests. Either the BND President Ernst Uhrlau or one of his deputies is to report to the intelligence oversight committee, the Parliamentary Control Panel (PKG).

Thomas Oppermann, chairman of the PKG and a member of the Social Democrats, has said he could not imagine how the German agents could be involved in an attack on EU offices. "That seems to have been plucked out of the air," he told ARD on Monday. Max Stadler, who represents the opposition FDP on the panel, told the Berliner Zeitung that he wanted the government and the BND to say if the men were indeed intelligence officers.

On Monday Germany's Bild newspaper reports that sources close to the intelligence community say that the BND has ruled out the involvement of any of its employees in the attack on the EU office. The sources told the paper they believe it is much more likely to have been extremists in Kosovo who oppose the involvement of foreign organizations in their country. The arrest of the Germans is, they conclude, the result of a power struggle within the Kosovo leadership, with the anti-European faction having prevailed over those who wanted to see the three men released.

The diplomatic spat has come amid rising tensions over the EU police mission in Kosovo, where UN peacekeepers have been deployed since the 1999 NATO bombing campaign put an end to a brutal Serbian crackdown on Kosovo Albanian separatists. The UN mission, UNMIK, is now downsizing and the 2,000 strong EU mission, known as EULEX, is to take over law enforcement.

However, Serbia, which has not recognized Kosovo, has won concessions on the EU deployment and the current plan proposes leaving the UN to patrol the ethnic Serb enclaves within Kosovo. This in turn has been rejected by Pristina which suspects the split of the police missions could lead to a de-facto partition of the fledgling state which declared independence in February.