On Wednesday morning, Peer Steinbrück sounded like this: "We have to be careful that the savings measures don't come at a lethal dose." At midday like this: "We sometimes forget what this crisis means for the people." And in the afternoon: "This country deserves trust." In total, there would be three appearances, but one message: At some point the demands dictated by Brussels will have gone far enough -- even now, a bit more leniency would be in order.

Steinbrück, the Social Democratic Party's (SPD) candidate for the Chancellery in this year's election, has been on a European tour this week that culminated in his visit to Athens, the epicenter of the debt crisis. The country is suffering under tough austerity measures and is making little progress.

Youth unemployment is at a record high, and investors are hesitant to return. Back in Berlin, many would like to cut off the money flow to Greece completely. Not Steinbrück. He wants to counter distrust of the Greek government in Germany, and that's the main objective of his visit. "The country needs more time to get its public finances back in order," he says. Just call him Steinbrück the Merciful.

It's a course not without risk. The SPD politician knows that the woman from whom he'd like to inherit the Chancellery takes a much different tack. Since the beginning of the crisis, Angela Merkel has styled herself as the iron chancellor. Whenever she discusses the future of Greece, she insists on the country's compliance with conditions set by Brussels in exchange for its bailouts and on its success in implementing massive social reforms and getting the deficit under control. In other words: No money without getting something in return. So far, this has kept her in good stead with voters in Germany.

Steinbrück also wants the conditions to be met. But by the end of the morning it is already clear that he would like to bring a bit more leniency to the debate. The chancellor candidate is paying a visit to a charity institution, a cream-colored building in central Athens where the city stores various donations to distribute to the needy. Clothing, toys, stuffed animals: all is welcome. Steinbrück is getting a tour from the mayor. He pauses in a storage room filled with nothing but boxes of noodles, bags of rice and drinks. "You'll have to cool this down," he says. "It's food after all."

Steinbrück likes the facility. It fits with his message. He thinks that Europe, Germany included, could address the social implications of the austerity measures with a bit more calm contemplation. Relegation fears, unemployment, market crashes -- "This is not something that has nothing to do with us," he says. If Greece were to implode, something "that looks and feels like 'Alice in Wonderland' could easily spread to our country."

'That Is Going to Cost Something'

The Greek like this. They would like to hear something like this from Merkel. Steinbrück was chauffered through the city with flashing lights and a small convoy. He was received by Greek President Karolos Papoulias, as well as the conservative Prime Minister Antonis Samaras and Evangelos Venizelos, the former finance minister and head of the Greek social democratic party, PASOK. Wherever Steinbrück turns up, he always sings the same tune: Reform and austerity efforts, yes. But one shouldn't overdo it. Otherwise Greece could fall apart completely -- and take Europe with it into the abyss.

Some of Steinbrück's talking points take some getting used to. Mildness hasn't previously been one of his core competencies. And of course it's easy for an opposition politician who doesn't have to answer to Brussels to call for more leniency. On the other hand, Steinbrück's attitude is not likely to be popular domestically, so it would be wrong to say his position is a ploy to ingratiate himself with voters.

After one of his many appointments, he is asked whether he doesn't worry about the the effect it may have on voters if he appears too friendly with Greece. No, says Steinbrück. Greece must be stabilized. "German voters have to be told: That is going to cost something," he adds. How much exactly, what he really means about the loosening of austerity measures, and what such a concession might look like in the end -- that he didn't say. He is nevertheless satisfied with his message. Finally, he's taken a different course than the chancellor.

Steinbrück's trip, which began with stops in Dublin and London, could certainly have been considered a success. Yet once again, a problem smoldering in the background has put significant strain on an otherwise-successful endeavor.

While he was discussing bank regulations in London and advocating for leniency in Athens, unpleasant headlines back home cast a constant shadow. Led by Karl-Heinz Steinkühler, a former reporter with the German newsweekly Focus, a group of supporters have started a blog intended to spruce up Steinbrück's public image, which has taken a drubbing in recent weeks.

The site is not connected to the SPD, at least according to representatives of Steinbrück and the party. Nevertheless, the "Peerblog" found itself in hot water when questions arose about the five anonymous entrepreneurs who back the site. Suddenly, everyone wanted to know who these people are and whether Steinbrück knows the investors. "No," he says. He only knows a few of the people who write for the blog. Since Wednesday evening, the blog has been offline, ostensibly brought down by hackers.

Earlier this year, many observers attributed the election loss of the former Christian Democratic Union governor of North Rhine-Westphalia, Jürgen Rüttgers, to a campaign against the politician conducted by a similar blog run by some of the same people. That site also claimed to be independent, but many claimed it was closely aligned with the SPD. Rüttgers would later describe it as a "form of negative campaigning that I had never before seen in Germany."

Phone Call in the Corner

At all of Steinbrück's press conferences and informal talks, the conversation always makes its way to the subject of the blog. It's clear that the issue will be an annoyance by Wednesday in London, at the latest. That's when Steinbrück's staff calls him over in the middle of a talk. He has to take a call. Steinbrück disappears into a corner of the reception hall. Only the words, "Steinkühler" and "financiers" can be heard, but it's soon clear what the conversation was about.

The case is less a problem for the candidate than it is a further indication of the clumsiness that surrounds him. To the question of whether Steinbrück knew the investors, there was a long period of confusion during the trip before the candidate was able to agree with his staff on a common language. His most important advisors were not on hand for the trip, nor was his spokesman. The latter has been on vacation, which with hindsight may not have been such a good idea. Internally this has been a huge source of anger. On the trip there were moments when Steinbrück had to become his own press secretary. "Quiet, please!" he shouted at the residence of the German ambassador in Athens when some Greek journalists began hounding him to answer certain questions about the euro crisis. He said it was impossible to speak.

Shortly before departing from Athens, he is asked once more about the topic. "Once again," Steinbrück says, visibly shaken, before getting in his car, "I don't know the financiers, just a few of the supporters. I ask you to please take note of this distinction."

Then he was off to the airport. 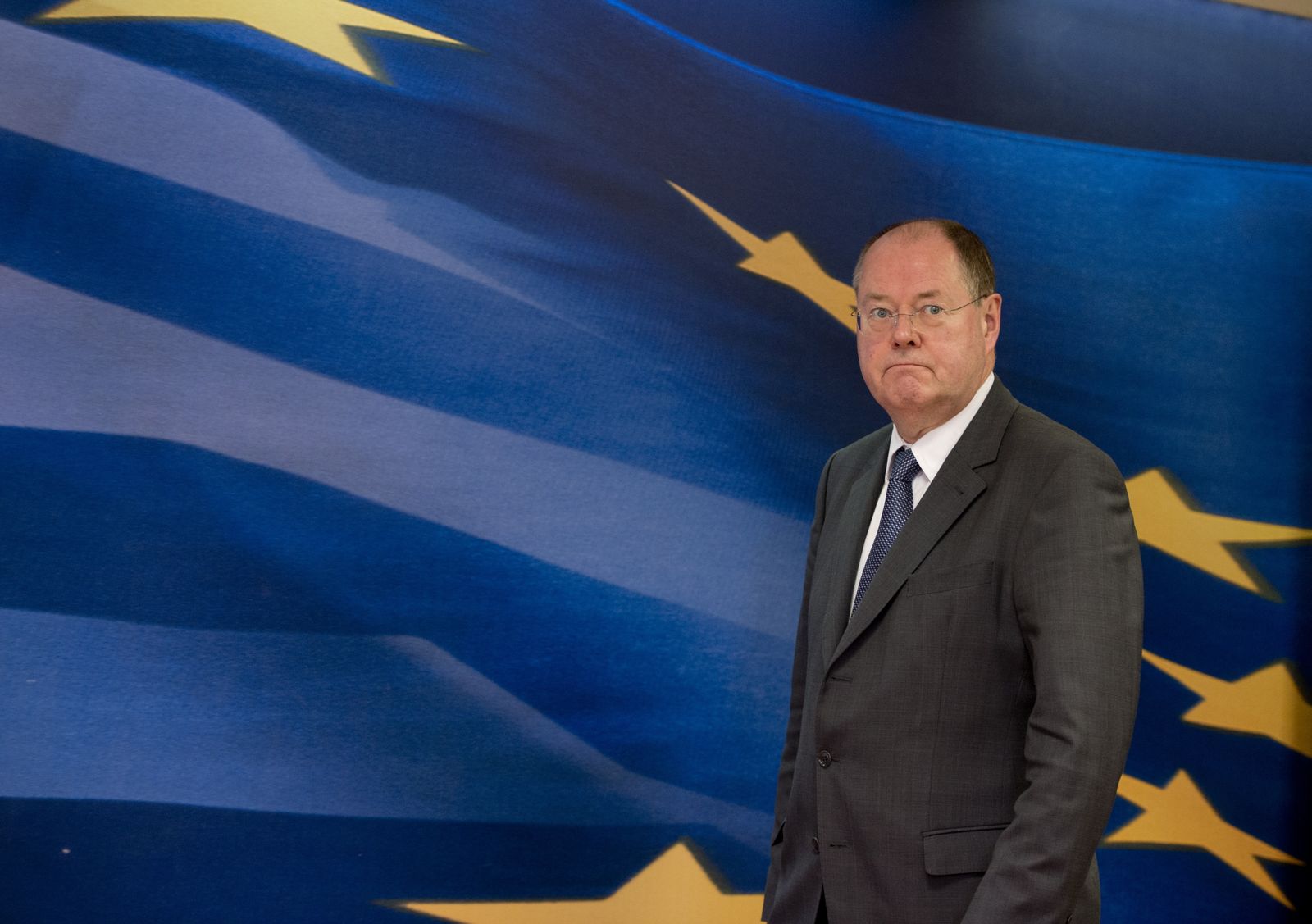 SPD chancellor candidate Peer Steinbrück: "We sometimes forget what this crisis means for the people."