First things first: this commentary isn't directed against Greece. It's got nothing to do with all the talk in Germany about Greek citizens not paying their taxes, Greek civil servants who don't work or Greek politicians who break their promises. This commentary has a clear and simple message: The second Greek bailout of €130 billion ($172 billion) that euro zone finance ministers are expected to agree on Monday afternoon should not be paid out.

Sure, Greece will need help from the other European Union member states for years, possibly even decades, and Germany shouldn't refuse that help. Europe will likely end up pumping far more money into Greece in the coming years than the fresh aid now being discussed in Brussels.

The mistake isn't the size, but the construction of the bailout package. It isn't geared to the requirements of the people of Greece but to the needs of the international financial markets, meaning the banks.

How else can one explain the fact that around a quarter of the package won't even arrive in Athens but will flow directly to the country's international creditors? The holders of Greek government bonds are to get some €30 billion as an incentive to convert their old paper into new bonds. The aim is to keep alive the illusion that Greece isn't bankrupt -- after all, the creditors are voluntarily forgiving part of the debt. The financial sector is cleverly manipulating the fear that a Greek bankruptcy would trigger a fatal chain reaction.

That leaves €100 billion. But that too isn't geared to what Greece needs in order to get back on its feet. It's linked to an estimate of how much debt the Greek economy can bear without collapsing. International technocrats agree that with debts amounting to 120 percent of gross domestic product, the country can just about go on servicing its debt. That's the level at which the cow can go on supplying milk without dying of exhaustion. So 120 percent became the goal.

In the last few days there has been a surreal political debate about whether the €130 billion will get Greece down to the desired debt ratio of 120 percent of GDP or if it will be stuck at 129 percent -- in 2020, let's not forget. Predicting the debt level of an economy eight years down the road to within nine percentage points: that's usually not even possible in Germany. In Greece, with its collapsing economy and not especially reliable statistical system, such forecasts are deep in the realm of black magic.

Equally outlandish are the calls by Greece's creditor nations for a rise in Greek budget savings to €3.3 billion from €3 billion as a precondition for paying out aid. If only the solution to the Greek problem hinged on €300 million more or less! Given the many spurious pledges and creative accounting measures the Greek austerity program consists of, that sum can surely be dismissed as irrelevant.

In truth, Greece has of course been bankrupt for a long time. The country doesn't need debt forgiveness of 70 percent, it needs a 100 percent debt cut if it is ever to recover. This sick cow won't be producing any milk for years to come.

Most of the countless officials dealing with the Greek problem in the euro zone are well aware of this simple truth. Some of them, including people in the German government, privately admit that the €130 billion won't solve the problem. It's only about buying time, they say. Time until the financial markets have stabilized to such an extent that they can weather a Greek default without a disastrous chain reaction. Without bank insolvencies, without domino effects through credit default swaps and without an explosion of bond yields in the euro zone's other ailing economies.

But when will that moment be reached if not now? Since last autumn, the European Central Bank has been showering banks with liquidity. Spain and Italy, the two wobbling giants of the euro zone, have new government leaders who have made credible pledges to reduce debt. Most of the other EU states are similarly committed to budget discipline through the EU's fiscal compact. And the problem with the credit default swaps isn't as serious as the banking lobby keeps claiming.

If the European politicians have a shred of faith in all the work they've done in the two years since the breakout of the euro crisis, they should now admit what everyone already knows: Greece is bankrupt and all the country's debts should be forgiven.

Greece should nevertheless get the €130 billion. But the money should be paid in another form. Instead of rewarding financial speculators for their high-risk deals, the money should flow into the reconstruction of the Greek economy. A new Marshall Plan is needed, rather than a manic insistence on debt repayments. 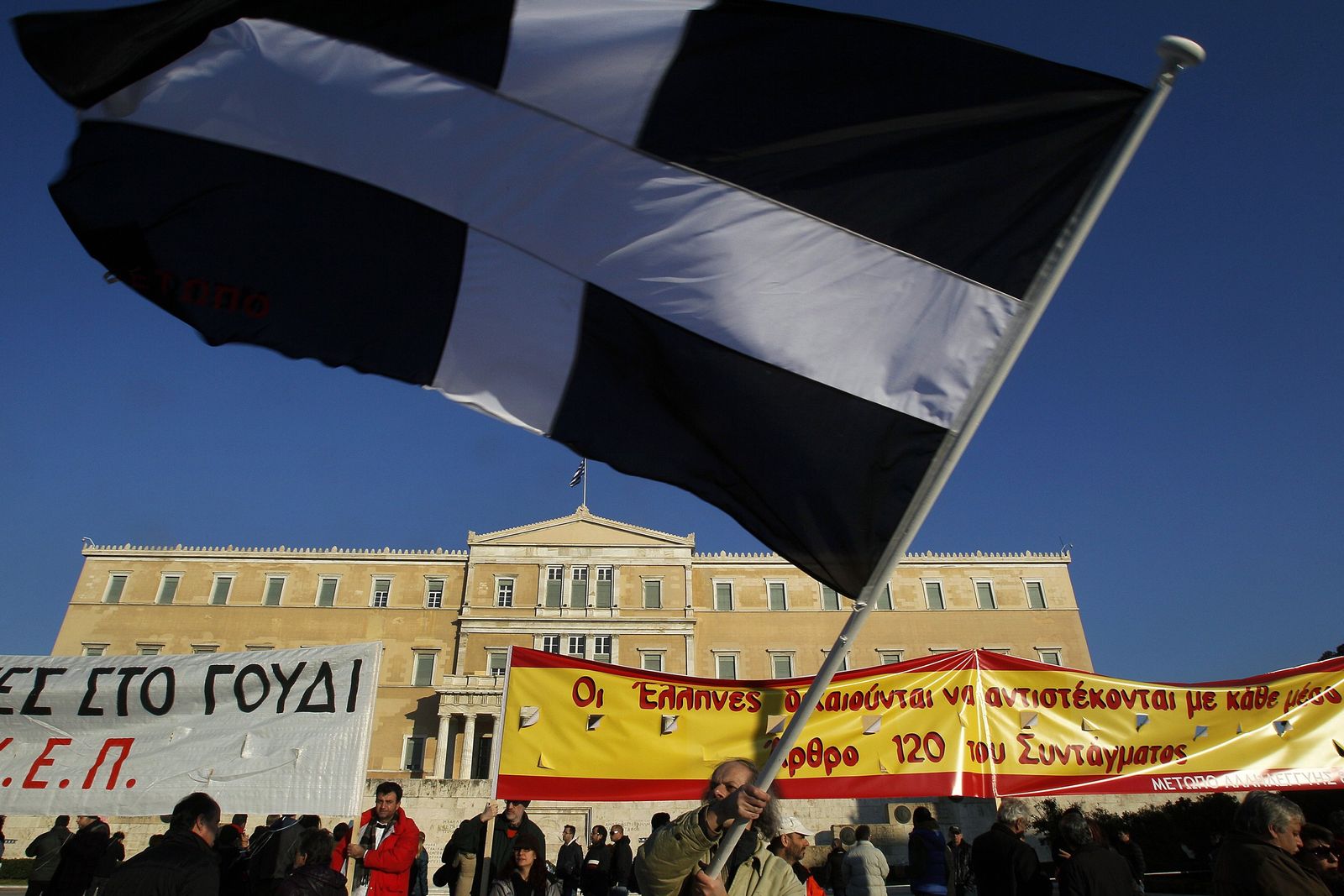 Anti-austerity protests in front of the Greek parliament on Sunday.