It's one of those strange coincidences. When the German national football team takes on Italy in Warsaw on Thursday evening, in the semi-final of the European Football Championship, a second, no less interesting German-Italian duel will be taking place 1,200 kilometers (750 miles) away in Brussels -- where Italian Prime Minister Mario Monti and Chancellor Angela Merkel will confront each other at the European Union summit.

On the football pitch, the Italians have always come away victorious. In politics, however, it is Merkel who has always won the day, most recently at the four-way summit in Rome last Friday. But this time, Monti is threatening to keep negotiating until he gets what he wants, saying he's ready to keep talking until Sunday night, past the summit's scheduled end on Friday. Otherwise, he warned on Wednesday night, anti-EU political forces could be unleashed "which would be a disaster for the whole of the European Union." Spanish Prime Minister Mariano Rajoy supports Monti in his position.

The leaders of Italy and Spain, -- the third and fourth largest economies in the euro zone -- are demanding relief from the high costs of servicing their debt. Yields on Spanish 10-year bonds are now almost at 7 percent -- a level considered unsustainable -- and interest rates on Italy's bonds are not much lower. Monti and Rajoy complain that their countries can not cope with such high yields for much longer. They want the euro rescue fund, the European Stability Mechanism (ESM), to buy up their bonds in order to push down the market rates.

Firmly on Her Side

Merkel, however, feels that her partners have not yet reached their limit. In any case, she is refusing to support the ESM intervention. Dutch Prime Minister Mark Rutte and Finnish Prime Minister Jyrki Katainen are firmly on her side.

The two-day summit in Brussels is threatening to degenerate into a north-south split. There are two main points on the agenda. The 27 heads of state and government want to adopt a growth pact to complement the fiscal pact. That part is uncontroversial and only needs to be rubber-stamped.

The second issue, however, is guaranteed to cause conflict: the question of the further development of the economic and monetary union. On this point, a split runs right through the euro zone, pitting Germany, the Netherlands and Finland against Italy, Spain and France.

Both camps naturally insist that they want "more Europe." But their opinions about how to get there are widely divergent: The Mediterranean countries are pushing for a collectivization of debt, which would happen in the short term through the use of the ESM and in the long term through euro bonds. Germany, however, is insisting that Brussels first needs to be given more power to intervene in national budgets before there can be talk of joint liability.

The question is whether French President François Hollande will mediate between the two camps. On Wednesday evening, Hollande met with Merkel at the Élysée Palace in Paris to prepare for the summit. Their discussions were off the record, but Hollande is believed to have put in a good word for Monti and Rajoy. Merkel, for her part, is likely to have encouraged Hollande to support a greater say for Brussels on budgetary matters.

In the weeks following his inauguration, Hollande initially acted as Merkel's main adversary, but recently he has been trying to be more conciliatory. He has accepted that euro bonds can only be a long-term solution. And in a symbolic gesture, three top French officials -- the foreign minister, the interior minister and the prime minister -- attended a farewell ceremony for the outgoing German ambassador in Paris on Tuesday evening. Observers consider the presence of the three officials to be a sign that Hollande wants to improve the troubled Franco-German relationship.

But that does not change the fact that the summit is expected to be stormy. "I have no illusions," said Merkel in her statement to the Bundestag on Wednesday. "I expect intense discussions in Brussels."

It is already clear that the high expectations on the financial markets and in capitals outside the EU will not be met. Instead of a clear commitment to a robust monetary union, with all that entails, the European leaders will probably only agree on a vague roadmap -- in other words, the usual muddling through.

The dispute was fanned by the discussion paper for the summit that European Council President Herman Van Rompuy presented on Tuesday. The seven-page report was prepared by Van Rompuy together with European Commission President José Manuel Barroso, ECB chief Mario Draghi and Euro Group head Jean-Claude Juncker. It bears the title: "Towards a Genuine Economic and Monetary Union."

Kicking the Can Down the Road

Ahead of publication, German negotiators had already deleted many passages from the paper that they considered unacceptable, but Chancellor Merkel was still dissatisfied with it. On Wednesday, she complained to the Bundestag that the paper still puts the focus on collectivizing debt. Tougher controls on deficit and debt offenders is only given second priority, she said, adding that in her view the order must be reversed.

One reason why Merkel is so inflexible is that the two houses of the German parliament, the Bundestag and Bundesrat, are due to vote on the ESM and the fiscal pact on Friday afternoon. Merkel is unable to make further concessions in Brussels before these measures are approved, otherwise it could jeopardize the two-thirds majority that she needs to get the legislation through parliament. In the view of those who were hoping for significant progress in Brussels, the timing of the summit is therefore very unfortunate.

Other European leaders are also under intense pressure at home. Italian Prime Minister Monti desperately needs demonstrable results, because the Italian election campaign begins after the summer break and Monti's predecessor, Silvio Berlusconi, is lurking in the background, apparently plotting his political comeback. Dutch Prime Minister Rutte is opposed to transferring any more power to Brussels, because he is threatened by a rise in left-wing and right-wing euroskeptic populism ahead of elections in September. Meanwhile British Prime Minister David Cameron has already made it clear that Britain will not support the European-level bank supervision proposed by Van Rompuy in his master plan.

Hence the situation heading into the summit is even more complicated than usual, and there is no solution in sight. The only option, therefore, is to kick the can down the road. In his report, Van Rompuy already proposed that the four EU officials could present another interim report ahead of the next summit in October. They will follow that up with concrete proposals in time for the December summit. 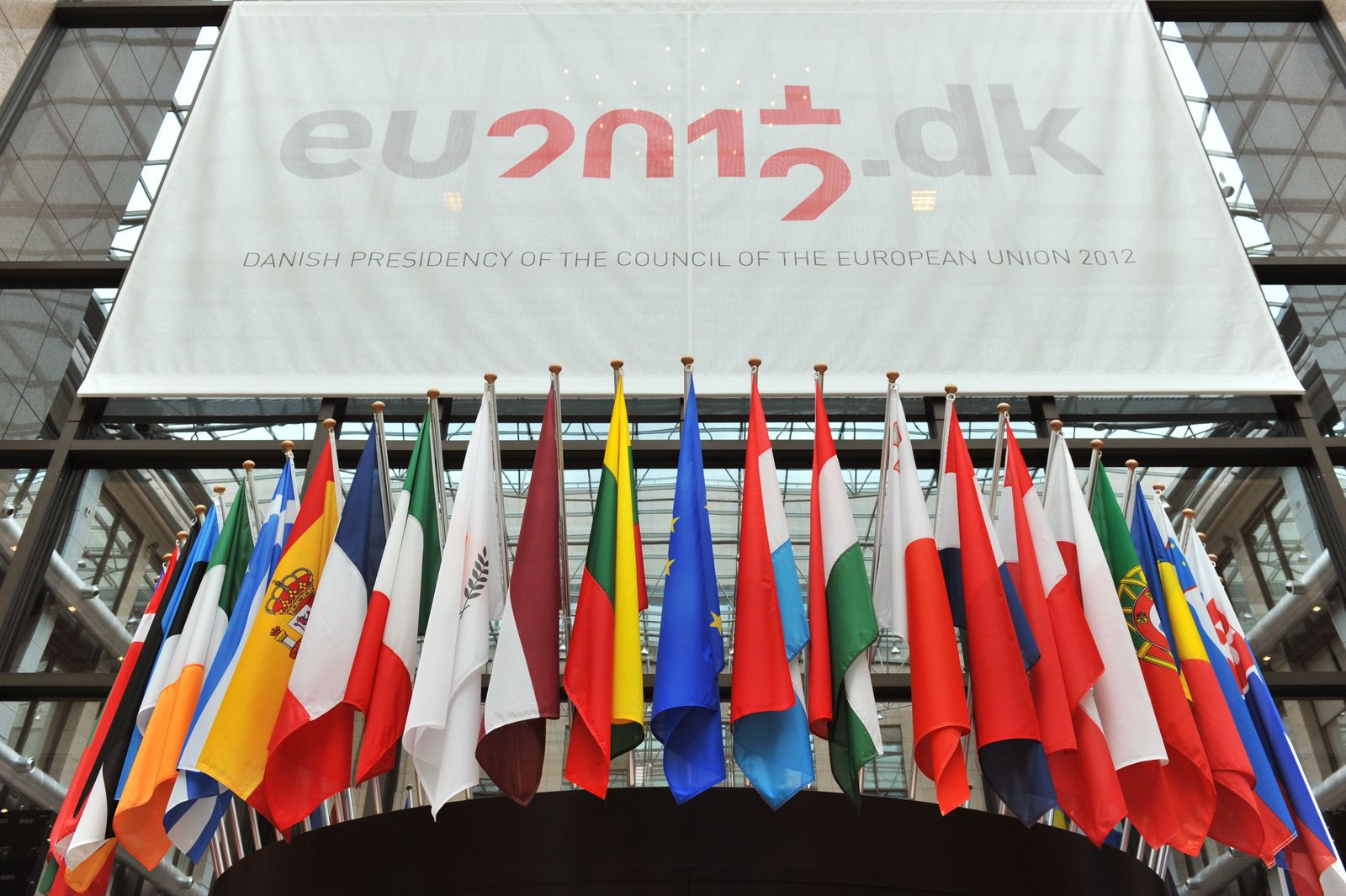 European Union country flags on display in the European Council building in Brussels ahead of the EU summit.