In recent days, it seemed as though the entire German cabinet had discovered youth unemployment as its new pet issue. Chancellor Angela Merkel announced there would be a job summit for Europe's young people, while her finance minister, Wolfgang Schäuble, promised a loan program for Portuguese firms who train jobless youth. Labor Minister Ursula von der Leyen traveled to Madrid to take on the issue, which Foreign Minister Guido Westerwelle called the "most urgent of tasks." Von der Leyen carried with her plans for a training program that would place 5,000 young Spaniards with German firms over the next four years. On Tuesday, the busy minister will also present a "New Deal" for European young people at a conference.

The concentrated efforts of these prominent German politicians on behalf of Southern Europe's youth appears to be necessary, given data that shows unemployment has reached shocking levels there as the euro crisis wears on. Eurostat, the European Union's statistics office, reported at the end of last year that it had reached 57.9 percent in Greece and 55.2 percent in Spain.

But is every other young Greek or Spaniard really out of work? A closer look at Eurostat's statistics outline reveals that these rates do "not necessarily mean that the group of unemployed persons aged between 15 and 24 is large." That's because many in this group are full-time students and are "neither working nor looking for a job." Students are therefore omitted, though they account for more than half of those under 25.

There are other indications that the classic youth unemployment rate creates a distorted view of reality. For example, the proportion of underqualified young people who are actually on the job market is far greater than it is in the entire population of 15- to 24-year-olds that includes students. Anyone who drops out of school at 14 gets statistically grouped into the workforce -- and they are likely to be unemployed.

Meanwhile, the best students often pursue their educations the longest, during which time they remain left out of the data. Those who go on to earn a master's degree or Ph.D. often don't enter the labor force until they are past 25, which means they never even appear in the youth employment statistics. Thus, Eurostat has also made an alternative calculation that accounts for the entire under-24 population, including students. This ratio shows that while the situation for young Southern Europeans still isn't great, it's also far from catastrophic. According to this calculation, Spain still led in youth unemployment for 2012 -- but at a ratio of 20 percent, compared to the frequently mentioned rate of 55.2 percent. Greece was at 16 percent, while 10 percent of Italy's young people were out of work.

So, in reality, it's not half of Spain's young people who are unemployed, but rather one-fifth -- though this remains a high level that obscures an even more distressing problem. Many students are choosing to extend their studies because they fear the hopelessness and stigma that come with unemployment. What's more, those who do work are often paid low wages.

Nevertheless, economists say that these young people aren't the biggest losers of the crisis, and that other groups desperately need more help. "Age is the wrong criterium for evaluating who is worthy of assistance," says Carlos Martin Urriza, head economist at CCOO, Spain's largest trade union. Those over 30 who have completed only the equivalent of a middle-school education are more likely to be unemployed, and for longer periods of time, than highly qualified workers under 30, he says. During the country's real estate boom, thousands of young Spaniards dropped out of school or university to make easy money in the sector. Now, many are older than 30 and don't qualify for programs such as those Germany has in mind.

It's the slightly older who have been hit hardest by the crisis. "When the economy was flourishing, they took on cheap loans, built houses and started a family. Today, 88 percent of unemployed family breadwinners are over 30," says Urriza. Most younger unemployed people don't have a house that can be foreclosed on or a family they have to feed. To move back in with one's parents after graduating from university is painful, but putting children to bed hungry is worse.

'Only the Young Take Priority'

For Juan José Dolado, a labor market expert at the Charles III University of Madrid, it's not the young, but rather low-skilled workers of all ages, who are "the true problem." Returning to school or university is not a solution for people with a family to feed. What they need is a dual vocational education and training model in line with Germany's, Dolado recently suggested in the Spanish newspaper El País.

Instead, complains unionist Urriza, many of the measures taken in Europe are merely symbolic. He says there's a reason that the employment guarantee approved in February by the EU only includes unemployed people under 25. With young people, he reasons, it's easier to finesse the statistics by placing them in unpaid internships. "To train those over 30 is an expensive and long-term measure -- the policy lacks the endurance for that," says Urriza.

The Spanish government, too, with its "Strategy for Entrepreneurship and Youth Employment" program, aims only at 16- to 30-year-olds. "The government decides what programs will get support from Europe. They take the money and don't ask questions," says Urriza. "And for Europe's politicians, only the young take priority." 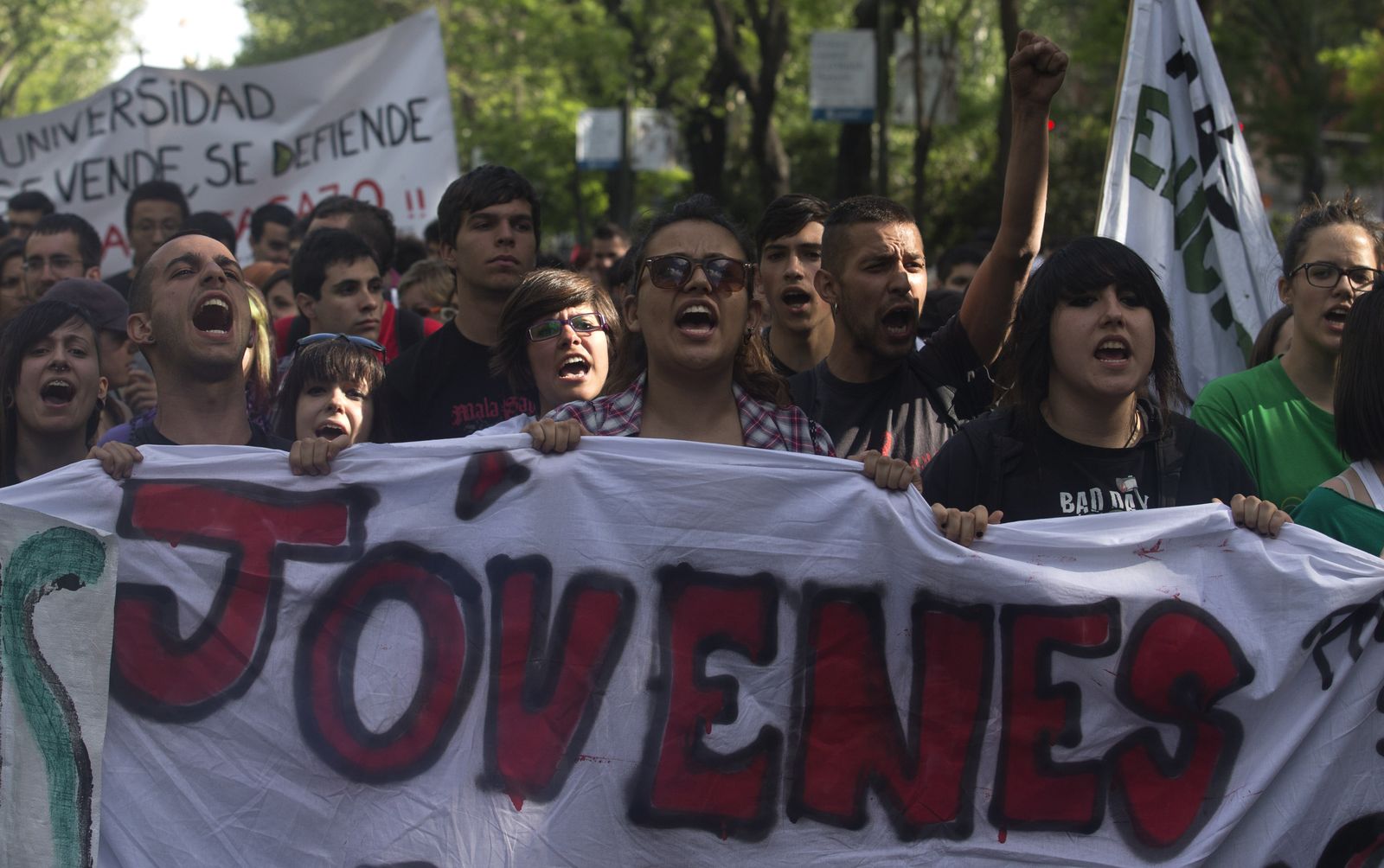 Students in Madrid protest government austerity measures in early May.