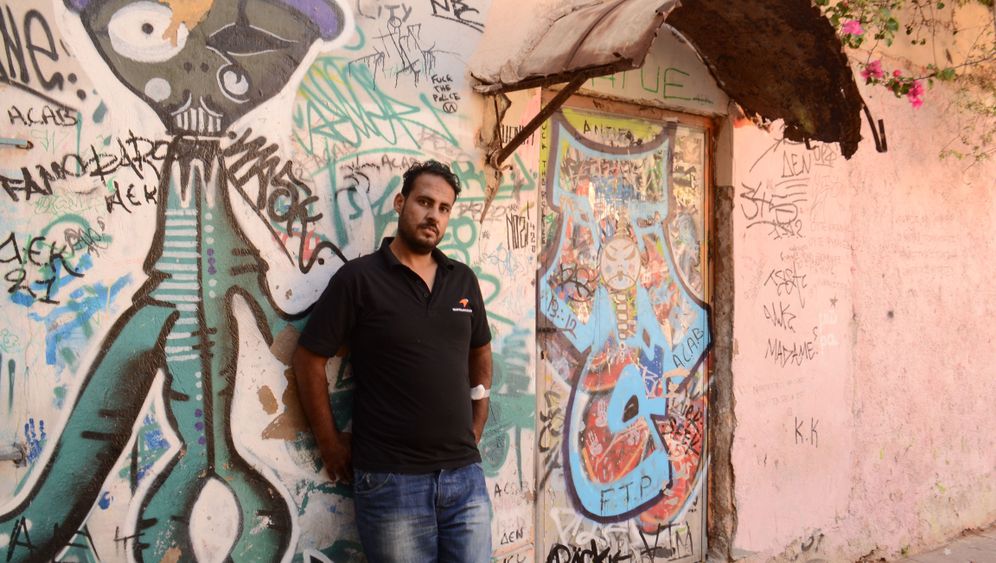 On his third day at sea near the coast of Malta, Shukri al-Assouli began to hallucinate. He saw streets, houses and his mother, who greeted him with a smile back at home in the Gaza Strip. He wore the life vest of a man who had drowned and clung to an empty metal container. He then started to lose his strength. Exposure to the salt water had discolored his skin, his arms and legs had grown numb from the cold water and his fight to keep from drowning. Finally, a freighter ship saw them and pulled Assouli and five other survivors from the water. He thought it was a hallucination. "I had already figured I was going to die," he says.

Assouli was flown by helicopter to the port city of Chania in Crete, where he spent five days in the hospital. He makes his way down the clinic hallway with unsteady footsteps, his eyes are reddened and the wrinkles on his forehead are furrowed. Although he's been saved, he has also lost everything. He buries his head in his hands and cries. "How could the Europeans allow a crime like that to happen?" he asks. "Where is my wife? Where are my children?"

Shukri al-Assouli, 35, is an unemployed barber from Khan Younis in the Gaza Strip. He began his journey to Europe in August, right at the end of the war. He traveled together with his wife Hiam, 25, their four-year-old son Ritash and their eight-month-old girl Yamin.

In all likelihood, his wife and children are now dead. It is a fate shared by almost all of the passengers who boarded the boat in Damietta, Egypt, which then capsized off the coast of Malta four days later on Sept. 6. Most were from the Palestinian territories, but passengers also hailed from Egypt, Syria and Sudan. They were pulled into the water, carried off by the current and sucked into the Mediterranean. By Friday, only 10 survivors had been found. Two were taken to Sicily, two to Malta and six to Crete.

The Geneva-based International Organization for Migration called it the "worst shipwreck in years" in the Mediterranean. As if the situation weren't bad enough already, another boat carrying around 200 refugees sank the same week off the coast of Libya. Over the summer, at least 2,200 people drowned as they attempted to make their way north to Europe, more than three times as many deaths as in the entire previous year. But the sinking in Malta is more than just an accident. SPIEGEL and "Report Mainz," an investigative program with German public broadcaster ARD, interviewed three of the survivors in Crete. The depictions of the events suggest a monstrous crime occurred.

When al-Assouli arrived on Crete, he called his mother, his voice sounding distressed and flat. "Mama," he said. "Pray that Hiam and the children are still alive and that God protected them too."

In Khan Younis, Iftiha al-Assouli has hung dark towels from the windows of her apartment to protect against the blazing heat. In the stairwell outside, the drone of a generator can be heard. Inside, an old woman, her hands folded, sits on a bed, a photo of her son Shukri lying in her lap, one of the few she has of him. In it, he has a carefully groomed, close-cropped beard and is standing in front of photo wallpaper of palm trees. She repeatedly directs a neon lamp over at the wall, where a portrait of her granddaughter Ritash hangs in a gold frame. She has a passport sized photo of young Yamin placed in a corner.

Before leaving Gaza, Iftiha's son told her, "Mom, I'm going to be away for a while in a hospital in Sweden." Two years ago, during the war before last between Gaza and Israel, Shukri al-Assouli had been injured and he has since had shell splinters moving around inside his left leg. His cousin recommended that he seek treatment in Europe where there are better doctors. He wanted to go alone, but his wife kept insisting that she and their children should join him. He finally relented.

Since the start of the most recent war, hundreds of Palestinians have set off from the Gaza Strip towards Europe. The majority have traveled through secret tunnels into Egypt. Others have secured travel permits, either through legal means or via purchase or forgery. Shukri al-Assouli paid smugglers $2,000 for his journey to disaster.

Like many others before him, it appears that he sought help from two men in a store a couple of blocks from his parents' house. Yellow dollar signs are taped to the dusty shop window. The two sit in front of a computer with a blue notebook next to it containing long columns listing names and sums ranging from $2,000 to $5,000. The men claim they aren't smugglers but that people come to them when they want to leave Gaza. Before the war, they say that around 20 people came to them each week. Now that number has grown to 20 a day.

Ahmed Asfour, 25, is also from Khan Younis. He says he paid $2,500 for passage to Europe. It's likely that he, as well as three cousins, were aboard the ship that sank near Malta. His father Samir Asfour clutches his mobile phone, waiting day and night for a call from his son, but the phone doesn't ring.

Samir last spoke to his son on Sept. 6. He was already on the boat at the time. His father says Ahmed was frightened because the boat looked so rickety. "Come back, it's too dangerous. You could die," his father pleaded with him. "I have no life in Gaza anyway," his son countered. It was a statement his father couldn't really disagree with.

Twenty-six year old Mahmoud, an acquaintance of Ahmed Asfour barely escaped the same fate. The only reason he didn't make it on to the boat is that when he told his father about his plan to flee, his dad took away his money and his passport. Mahmoud says today it's the only reason he survived.

After he paid, Shukri al-Assouli, his wife and their children were taken to Alexandria, Egypt. Their smugglers locked them in an apartment where they had to wait for several days. Then they were picked up in a minivan and passengers were taken in groups of 20 in a rubber dinghy to the ship, which was anchored at the waterfront. Al-Assouli says the cutter, which was overcrowded, wasn't even 20 meters long. He says there were many women and around a hundred children on board. It was so cramped he couldn't even stretch out his legs. As the ship began to move, it swayed and al-Assouli became seasick. His daughter cried and said, "I want to go back to my grandma." He tried to comfort his children. "Don't be afraid, we'll soon be in Europe," he said.

'We Didn't Have any Time to React'

After four days at sea, another ship showed up that was also carrying smugglers. The men evidently needed the cutter and wanted to transport the refugees for the final miles of the journey in a smaller boat. The passengers refused. In response, the smugglers rammed the cutter without any warning, Assouli says. "We didn't have any time to react." A hole quickly developed in the side of the ship and the cutter filled with water within minutes. The 300 people who had been below decks had no time to escape and drown immediately. Assouli called out to his wife and children but couldn't find them.

After the ship sank, around 80 survivors had to fend for themselves in the cold sea. The few survivors who were actually wearing life vests formed a circle and tried to help the others stay afloat. On the third day at sea, the weather grew inclement and the waves swelled until they were meters high.

"Each hour we lost another person to the sea," says Abdelmazid Alhila, 24, another survivor. His arms are sunburned and his face full of scars. On the boat he met Mohamed Raad, 25. Neither had brought anything with them to eat, but they did have life vests. On the open sea, they clenched on to one another. Raad began hallucinating and almost took his life vest off. They urinated into bottles and drank from them. They also had to look on as one refugee after the other drowned and as mothers let their babies slide into the water when they ran out of energy. Alhila claims that four ships passed by but none stopped. "They just left us to die." Both men had fled Gaza after their homes had been destroyed in bombing attacks. They knew the journey would be dangerous, but they didn't anticipate just how bad it would be. Both were taken to Crete after being rescued and now they want to continue northwards together.

Two survivors interviewed in Sicily by IOM employees have offered similar accounts of the circumstances of the accident. Meanwhile, the public prosecutor in Catania, Sicily, has stated that more than 400 passengers were on the boat and that it had been "deliberately rammed." The prosecutor described it as an "especially grave criminal incident." By Friday, neither the wreckage nor any of the bodies had been recovered by the Italian navy.

Christopher Hein, director of the Italian Council for Refugees says breaking up the smuggling networks alone will not suffice to stop the dying in the Mediterranean. "We need a change in the EU's border policies," because people must first travel to the European Union before they can apply for asylum. For many refugees, the perilous path over the sea is the only option left. The European Council, the powerful EU body representing the leaders of the 28 EU member states, is also aware of the problem. A paper dating from late 2013 states that the increased border controls and measure criminalizing illegal migrants haven't led to a reduction in the number of refugees. Instead they have triggered an increase in networks of smugglers and human-traffickers.

In response, Current EU Home Affairs Commissioner Ceclia Malmström has called for the issuing of humanitarian visas to migrants. In addition, she has proposed that refugees be able to apply for asylum from countries neighboring the EU like Tunisia or Turkey. But most EU member states have rejected the proposal, fearing it would lead to an increase in the number of asylum applicants. Instead they seemed willing to accept the deaths.

After his release from the hospital, Shukri al-Assouli wandered through the streets of Chania. He walked through the market and past restaurants. One could have mistaken him for a tourist. He quietly says that he dreams of staying in Europe with his family, speaking as if they were still living.

That evening, Assouli climbed aboard a ship, a ferry, to Athens. His journey to the north continues.