US President George W. Bush jumped the gun on Monday, when he appeared to become the first major leader to recognize Kosovo's declaration of independence. "The Kosovars are now independent," he said in an interview with NBC on Monday, adding "It's something I've advocated with my government."

However, White House spokeswoman Dana Perino hurried to deny that this implied a US recognition of independence. "He didn't announce that," she said. "What he meant by that is that the Kosovars have declared their independence." It is the job of the US State Department to officially declare recognition and Perino said Bush is due to make a statement about Kosovo on Tuesday.

According to the agreed timetable, the EU had been due to be the first to announce its policy on Kosovo. The West has argued that this is a "European issue," despite the fact that Serbia and Russia insist it is a question for the United Nations. When Kosovo's Prime Minister Hashim Thaci announced independence on Sunday, Russia immediately called for an emergency session of the United Nations Security Council in a bid to block independence. 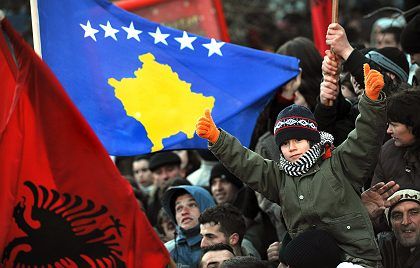 EU foreign ministers met in Brussels on Monday to discuss their reaction to the declaration. Although each EU member state is free to do as it pleases, the bloc had been hoping to form a common stance on the declaration. However, Spain broke ranks, saying it will not recognise the new state. Madrid is concerned that the move would encourage its own separatist movements. "The government of Spain will not recognize the unilateral act," Spanish Foreign Minister Miguel Angel Moratinos told reporters on Monday.

But France then took the plunge. French Foreign Minister Bernard Kouchner said on Monday that: "We intend to recognize Kosovo," and said French President Nicolas Sarkozy has written to his Kosovo counterpart informing him of the decision. The British Foreign Secretary David Miliband and Germany's Foreign Minister Frank-Walter Steinmeier quickly followed suit, telling reporters that their respective governments would also recognize Kosovo. Italy, too, said it plans to recognize the new country.

According to Swedish Foreign Minister Carl Bildt, a "large majority" of EU member states will recognize Kosovo within one month.

EU foreign ministers on Monday came up with a statement that would make it easier for EU countries to recognize Kosovo. It said that the province's history of "conflict, ethnic cleansing and humanitarian catastrophe" in the 1990s by Serbia exempts it from a rule saying international borders can only be changed with the agreement of all parties. This allows EU countries to recognize Kosovo's independence as an exception to the rule of "territorial integrity" of nations under international law.

Kosovo's much anticipated declaration was met with fury in Serbia and in the Serb-inhabited north of Kosovo. On Monday Serbia's Interior Ministry filed charges against three Kosovo-Albanian leaders, including Thaci, of committing a "serious criminal act against the constitutional order and security of Serbia," by proclaiming a "false state."

On Monday thousands of Kosovo Serbs demonstrated, chanting "This is Serbia," and "Down with America!" Crowds marched towards the bridge in the divided town of Kosovska Mitrovica, but were confronted by NATO peacekeepers. And a senior Kosovo Serb police official told the Associated Press that Serb policemen were starting to leave the multiethnic Kosovo police and place themselves under Belgrade's authority.

Meanwhile Serbia's Foreign Minister Vuk Jeremic said that the "so-called Kosovo state will never be a member of the United Nations." He told Serb television that the country would "use all diplomatic means at its disposal to block Kosovo's recognition."