Today, like every other day, nearly every question is directed at one man: Anders Tegnell, Sweden's state epidemiologist. There are three other people on stage alongside him for the press conference, but hardly anyone wants to hear from them.

Tegnell is a chiseled man of 64, casually dressed in a polo shirt and windbreaker. He is hugely popular in Sweden, with his likeness appearing on T-shirts and one fan even having his face tattooed on his arm. Tegnell has also become an international celebrity. He's considered the architect of Sweden's very special approach to the coronavirus pandemic.

At the press conference, Tegnell explains the latest figures. On Tuesday of this week, 48 new deaths were registered in the country and the number of patients in intensive care units suffering from COVID-19 is decreasing. Still, there have been far more newly infected people in the last few days relative to the recent past, but that's no cause for concern, Tegnell says. "The number of tests recently increased dramatically." Naturally, this would lead to more cases being discovered.

While the rest of the world has spent months discussing Sweden's approach to the pandemic, there has been little political debate about it in the country itself. That, though, is now changing, and the debate in Sweden is growing more heated. Was Stockholm right to respond to the pandemic with only a gentle, mostly voluntary lockdown? The country now has one of the highest death rates in the world. And economically, Sweden is still struggling.

This does not stop some people from seeing Sweden as a bastion of civil liberty and reason. Others, however, are frightened by how many people have died. They consider Sweden to be a dangerous coronavirus hotspot. Germany is one of several European countries that are not welcoming Swedish travelers this summer.

On Wednesday, the number of coronavirus-related deaths in Sweden topped 5,000, a total that is more than four times higher than the number of fatalities in Finland, Norway and Denmark combined.

Yet Anders Tegnell remains confident. He continues to believe in the Swedish approach and hopes that his country will be better protected come autumn, when a second wave of infections could hit other countries. The most recent study, however, showed that only 6.1 percent of Swedes have the necessary antibodies in their blood to combat the coronavirus. For Tegnell, it's not the best news.

It's unclear whether his strategy is aimed at achieving so-called herd immunity. Sometimes he talks about how it could be reached in a few months. At other times, he denies that that is the goal he is actively working toward. To achieve herd immunity, 70 percent of the population would have to be immune.

There is a certain irony in the fact that the Swedish approach is exalted, above all, by those in Germany who have been complaining that their country is ruled by virologists. Indeed, Sweden is the only country in Europe that has actually been governed by scientists in recent months.

Tegnell is only a department head at the Public Health Agency. Yet he has an unusually influential position. That's because according to Sweden's constitution, it's the experts within the administrative bodies who decide on fundamental issues. The government listens to them.

Tegnell is now, somewhat surprisingly, denying that it was he and his colleagues who came up with Sweden's current approach. In a short conversation with DER SPIEGEL, he says it is always the politicians who decide things in the end. "We follow the rules and advice they give us," he says.

But in Sweden, isn't it the other way around? "That's not true," Tegnell says. Really though? Sweden's official epidemiologist smiles. Certainly, he says, there is "a very strong relationship" between his authority and the government. It's been this way "for hundreds of years." But: "The final decision is always made by the government." And it may or may not implement experts' recommendations.

What would Swedish Prime Minister Stefan Löfven think about Tegnell's statements? For months, the Social Democrat has been repeating in speeches and interviews that he relies entirely on his scientists. "I listen to those who have the epidemiological expertise." He's just an "amateur epidemiologist" like any other Swede, the prime minister says.

Ebba Busch, leader of Sweden's Christian Democrats: "We have no control over the spread of the infection in the country."

If Tegnell means to place full responsibility on the government, it could be an indication of the pressure he's under. The high approval ratings of Sweden's approach to the coronavirus, after all, have begun to slip. In early June, Swedish TV reported that confidence in the Public Health Agency had fallen from 73 to 65 percent since April. Approval in the government fell even more sharply. Trust in Stockholm's crisis management dropped from 63 to 45 percent.

The opposition in Swedish parliament believes its time has come. For the last few months, all the parties have been observing the unwritten rule of maintaining a "truce" in times of crisis. But why? Ebba Busch, the leader of Sweden's Christian Democrats, says on the phone: "In the beginning, we said we would try to be as constructive as possible." It was their "strategic decision" to work with the government and voice criticism "only behind closed doors."

But there's no point in doing that anymore. "We have no control over the spread of the infection in the country," Busch says, a situation for which she blames the government. The closure of European borders for Swedish citizens is a "very serious situation," she says.

It's not that she has fundamental doubts about Sweden's approach to the pandemic. Keeping schools and public life largely open was the right thing to do, she believes. "But the prerequisite for doing so was protecting the elderly and those at risk." She believes the government has failed in that mission.

Busch then hits a sore spot: In Stockholm, the center of Sweden's battle with the virus, the situation in nursing homes spun out of control at times. Around half of Sweden's coronavirus fatalities were residents of institutions for the elderly.

"He Would Have Died"

Bengt Hildebrand, a general practitioner, is intimately familiar with the situation. His 78-year-old father has lived in a private nursing home in Stockholm ever since he had a stroke. "An institution with a good reputation," he says. On March 10, the home banned visitors. Hildebrand kept in touch with his father via Skype.

On May 1, his father was diagnosed with COVID-19, likely having been infected by a staff member. Hildebrand could hear over Skype that his father was breathing heavily. "He got worse and worse." He demanded that he be transferred to a hospital, but he was rebuffed. "They prescribed him morphine. He would have died quietly."

Only after days of effort did the doctor succeed in getting his father transferred to a geriatric clinic. There, the patient received infusions and oxygen, and after a week he was able to return to the nursing home. "He's still under strain from the disease," Hildebrand says, "but he's alive."

A tattooed portrait of Tegnell: A Swedish folk hero under pressure

Does this mean Sweden had to limit its medical services for older patients? Hildebrand is familiar with the guidelines from his own practice. "Nursing home patients should be treated in the homes for as long as possible," he says. At the institution where his father lives, this guideline was misinterpreted "as a request not to transfer any old people to the hospital." It was the same in other homes.

Today, Hildebrand considers the Swedish approach a mistake. He was of a different opinion in the beginning. "Many people have made the wrong choices. And now we have a catastrophe."

For the political scientist Gina Gustavsson, that catastrophe has led to unexpected attacks. In March, she began criticizing the Swedish strategy on Facebook at a time when Britain was radically changing its approach. "I was overcome with an icy fear," Gustavsson says, "Sweden was left alone on a path that we had taken together until then."

The reactions to her posts were at times aggressive, she says. "Critics were called alarmists, prophets of doom." She herself was told "not to spread panic."

At some point, her political science background led her to realize something. "This was my area of specialization: national identity, patriotism. I recognized a pattern." Swedes are very proud of their national identity, almost as proud as Americans. "In calm and stable times, national pride can be a very good thing," says Gustavsson. Positive patriotism strengthens trust in state institutions and can even lead to greater acceptance of immigrants, she adds.

"But when there's a threat, it turns." The result can be "aggression against minorities and people with dissenting opinions." At first, she noticed this was happening, then she experienced it first-hand.

In August, Gustavsson is set to travel to Oxford for a research project, if coronavirus regulations permit, and she's looking forward to taking a break from Sweden. She was particularly affected by the accusation that she was stirring up hatred against Anders Tegnell. "That's so far from the truth," she says. His situation isn't easy, she says. "He was transformed into a larger figure than he is."

How does Anders Tegnell himself see his role as a Swedish folk hero? "For me as a civil servant, it's a pretty strange position to be in," he says. He says he's made out to seem more important than he is in reality.

On the other hand: "It's very good for our agency to have a high level of credibility." If his popularity helps, that's fine. 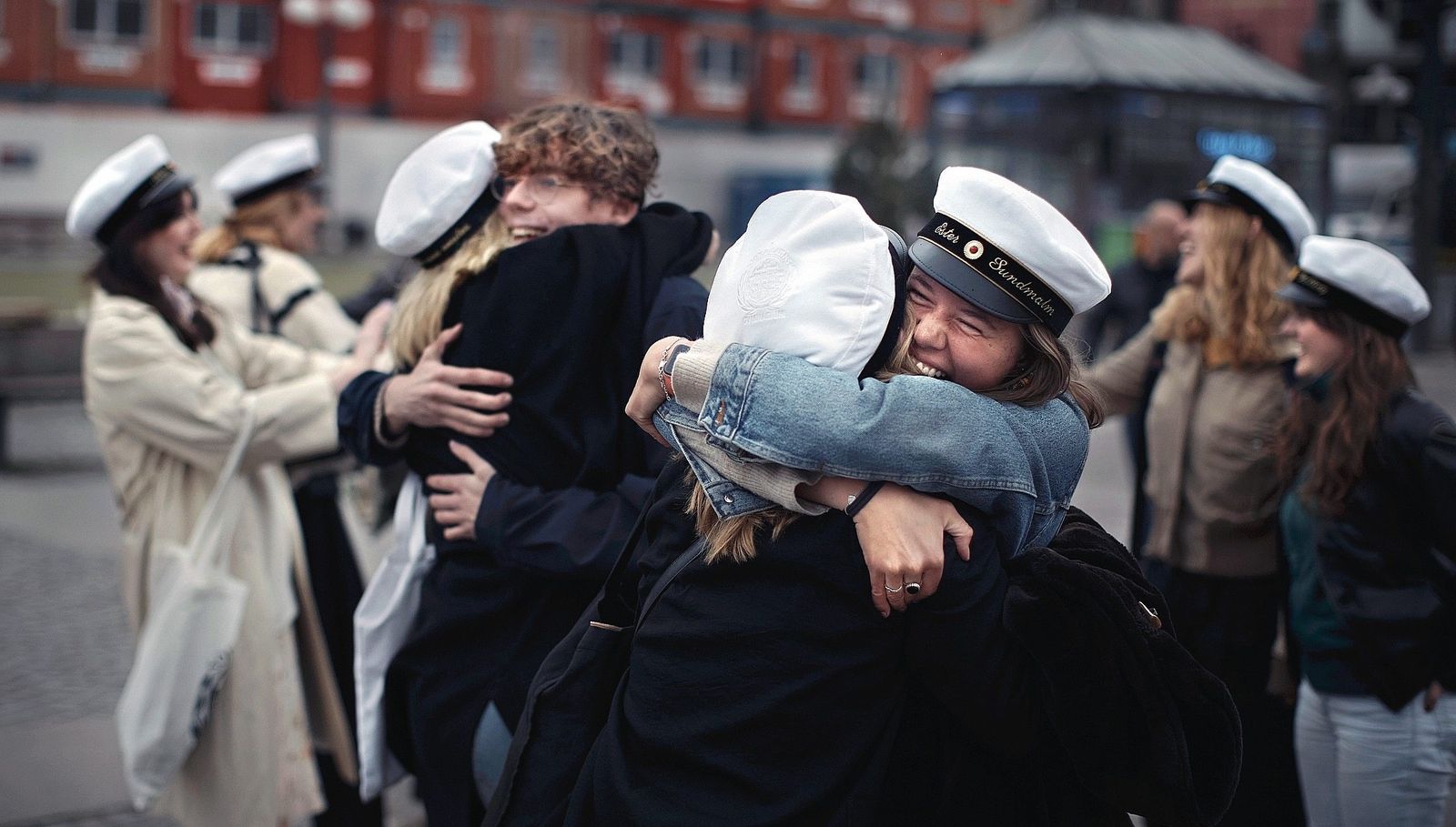 Graduates celebrate in Stockholm in April 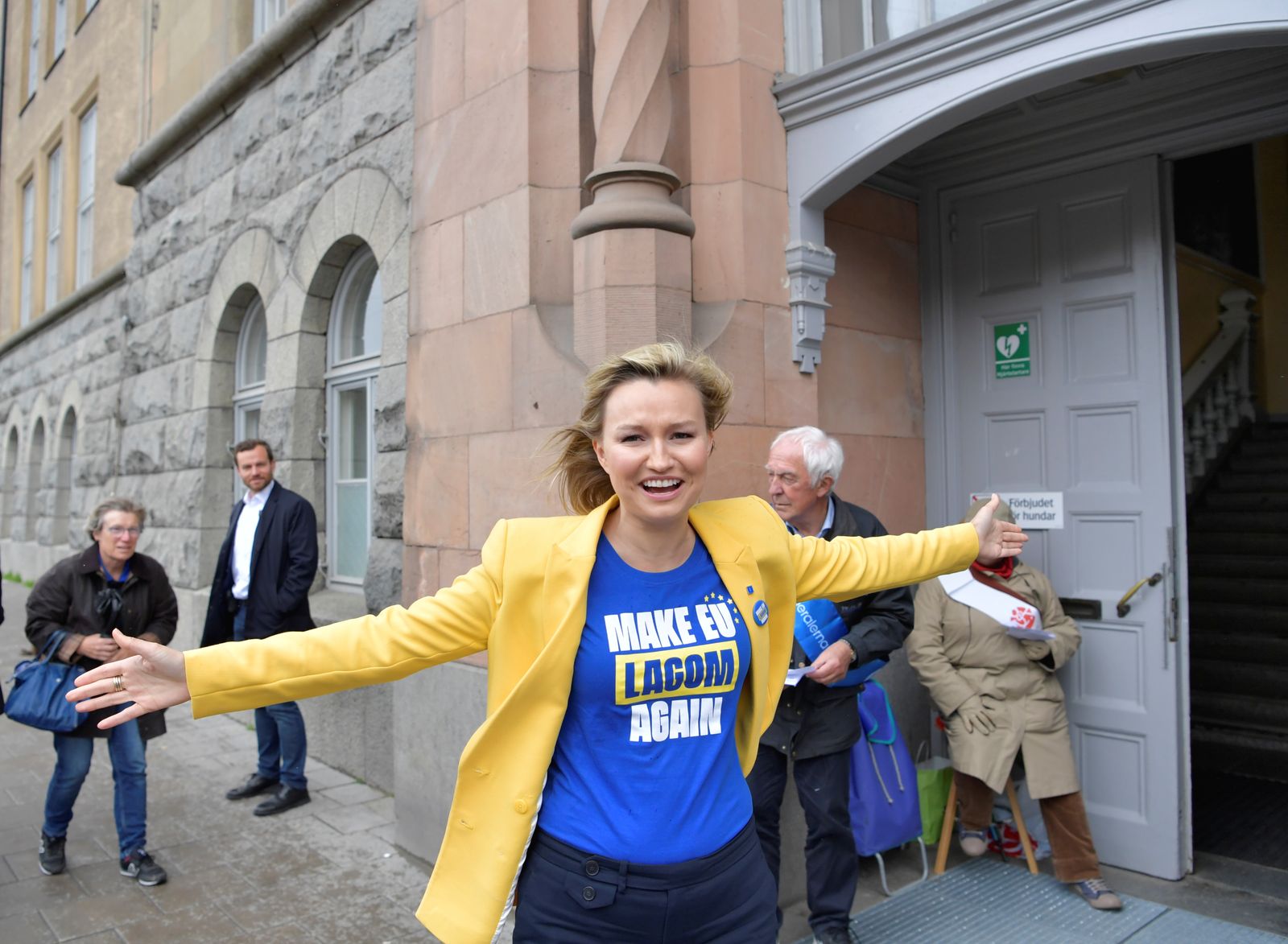 Ebba Busch, leader of Sweden's Christian Democrats: "We have no control over the spread of the infection in the country." 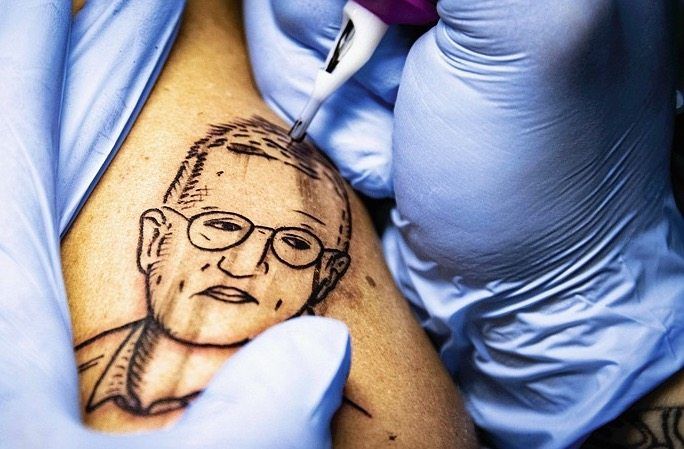 A tattooed portrait of Tegnell: A Swedish folk hero under pressure