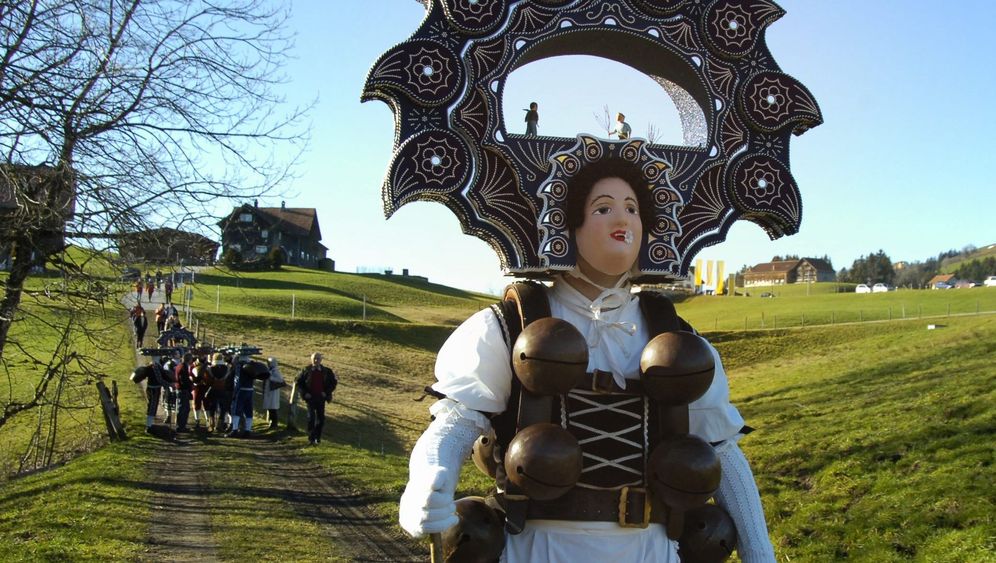 At 5 a.m. on a winter morning, Switzerland's mountainous northeastern Appenzell region is still pitch black and bitterly cold. But the lights are already on in a few taverns, where locals are finishing their preparations for an old New Year's tradition, the Silvesterchläuse, or "New Year's Clauses."

Each group, called a Schuppel, consists of five to eight men who don knee britches or women's dresses with white aprons. They carefully put on their cotton caps, white gloves and smiling masks with small flowers in the corners of their mouths. They finish off the ensemble with large cowbells around their shoulders, topped by headpieces the size of wagon wheels.

Miniature rural scenes are portrayed on the headgear with tiny carved figures shown going about their daily tasks, with the men sometimes wearing an entire pastoral scene on their heads. The leader of the Schuppel, known as a Vorroli, wears 13 bells on his chest and back and a headpiece so large that he can barely waddle through the door to get outside. When they are finally dressed, the group makes its way through the darkness to their first farm.

Time passes at a different pace in Urnäsch, a small village in the Swiss canton of Appenzell Ausserrhoden at the base of the landmark peak Säntis, and one of the villages where the Silvesterchlaus tradition is held. Here the New Year is celebrated not only on Dec. 31, but again nearly two weeks later in mid-January. It's not entirely clear whether this unique medieval tradition has pagan or Christian origins, though it has never been particularly popular with the church.

It's a long and difficult day for the participants, whose masks and bells weigh around 30 kilograms (66 pounds), which they carry up and down the steep hills throughout the valley from farm to farm. But the men receive a friendly welcome at every farm they visit, because hosting a Schuppel is seen as a particular honor.

As they arrive, they ring their bells and break out into a Zäuerli, a high-pitched male chorus that echoes through the valley, similar to yodelling. The family listens attentively to the song and sounding bells, which the men repeat three times before they heartily wish the residents a happy New Year with handshakes. The visitors are then offered mulled wine, which they drink through their masks with a straw. And, according to Swiss custom, the homeowner offers the visitors a bit of money for their trouble.

By midday, the singing groups of men have visited the scattered farms and begin heading toward the village. The daylight offers a chance to see them travel from house to house, a sight that brings out crowds of spectators, transforming the cold, dark celebratory atmosphere into something more akin to a folk festival.

A Trio of Costumes

When the groups converge, the three different incarnations of the Chläuse become most distinguishable. There are the die Schöne (the beautiful), die Schö-Wüeschte (the beautiful-ugly) und die Wüeschte (the ugly) participants. With their spectacular costumes of greenery and fearful masks, the Schö-Wüeschte are likely the oldest version of the tradition, resembling walking trees.

Their outfits are a mixture of the other two kinds of Chläuse, and save for the fact that they are made of natural materials, there is no limit to the imagination involved in their creation. They hide their faces behind masks made of pinecones, while their cloaks are made of moss, lichen or bark.

By afternoon the celebration moves back into the local pubs, where the Schuppel drink together with other guests until well past midnight, frequently breaking into another round of Zäuerli to wish each other the best for the New Year.