It's a striking image, but is it racist? The conservative Swiss magazine Weltwoche has unleashed a storm of criticism after publishing a photograph on the front page of its current issue of a Roma child pointing a pistol at the camera above the headline: "The Roma Are Coming: Robberies in Switzerland." The article deals with what is allegedly a growing problem of crime committed by Roma gangs in the country. "They come, steal and leave," reads the article, which was published last Thursday.

The cover has sparked widespread outrage, which has now reached Germany too. The Central Council of German Sinti and Roma announced on Tuesday that they had filed a criminal complaint for racial incitement and libel against the magazine with the public prosecutor in Heidelberg. The council also announced it was taking steps to stop the issue being sold in Germany.

The weekly's cover encourages the racist stereotyping of a minority, said the council's leader Romani Rose in a statement, adding that it places Sinti and Roma under general suspicion. He said it was similar to propaganda from the Nazi era, as it created the impression that criminality was caused by an individual's ethnic origin. The Nazis persecuted and murdered around 500,000 Sinti and Roma during the Holocaust.

The Central Council has also complained to Switzerland's Federal Commission against Racism (EKR). EKR President Martine Brunschwig Graf announced earlier this week that the commission would investigate the Weltwoche article.

In a video message published on its website on Monday, Weltwoche defended itself against the criticism. Deputy editor in chief Philipp Gut, who is one of the co-authors of the article, said that although the article had triggered a storm of indignation, it had also met with approval. He said that growing "crime tourism" in Switzerland, largely perpetrated by Roma gangs from Eastern Europe, was a reality, calling it a "current and serious problem." The photograph of the child symbolized "the fact that Roma gangs misuse their children for criminal purposes," Gut also told the Swiss newspaper SonntagsZeitung.

Several criminal complaints have already been filed against Weltwoche in Switzerland, Austria and Germany. One of the people who has filed a complaint, Austrian journalist Klaus Kamolz, told the Swiss news agency SDA that he wanted to send a "symbolic signal" against the "blanket condemnation of Roma as criminals." Peter Studer, a former president of the Swiss Press Council, said it was an "outrageous picture" with "racist overtones."

The row deepened when it was revealed over the weekend that the photograph of the child was not taken in Switzerland, but in Kosovo, where the Italian photographer Livio Mancini photographed children playing on a garbage dump as part of a 2008 series. Mancini told the Swiss newspaper Tages-Anzeiger that the magazine had obtained the image via an agency and he had no influence over how it was used.

The Roma and Sinti are among Europe's most disadvantaged minorities. There have been a number of high-profile attacks against Roma and Sinti communities in recent years, particularly in Eastern Europe. Right-wing extremists often target the groups, branding them as criminals. 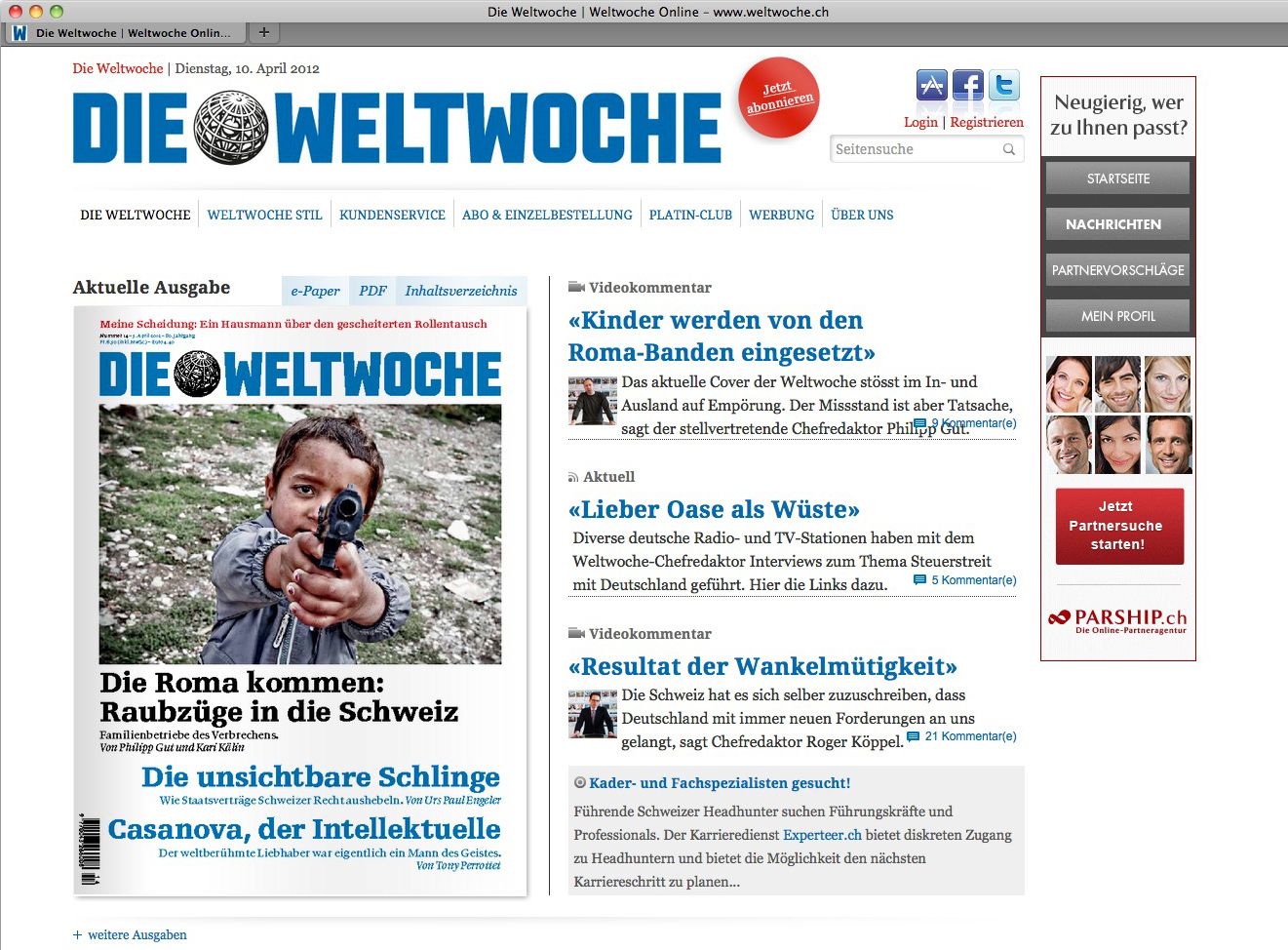 The cover is seen in a screenshot from the Weltwoche website.