Sunday was meant to be a triumph for the right-wing Swiss People's Party (SVP) and its new role as an opposition party. The party wanted to show that it could pull voters away from its political opponents. The party wanted to demonstrate that Switzerland could not be governed against it. Furthermore, the SVP wanted to show that the country's political elite had made a mistake last December by joining forces to vote Christoph Blocher, the party's figurehead, out of his justice minister position. That's what Sunday was meant to be.

Instead, though, it was a dark day for Switzerland's strongest political party -- and a day that raised new questions about Blocher's decision to steer the party into the opposition.

The party suffered an across-the-board loss that was more decisive than any poll or political pundit had predicted. Sixty-four percent of voters rejected the so-called "naturalization initiative," which would have changed the constitution, therefore allowing local communities to vote secretly on granting citizenship to individual applicants again. This practice had been in place in several towns and villages until the Swiss Federal Court rejected it in 2003. The initiative would have made it impossible for foreigners to appeal the decision if their application was rejected. But now of 26 Swiss cantons, the only one to vote in favor of the measure was Schwyz in central Switzerland.

More than 75 percent of voters also rejected an SVP initiative that would have limited the amount of information the government could provide in the run-up to nationwide ballots. The bill essentially would have permitted the SVP, backed by powerful billionaire supporter Christoph Blocher, to throw its support behind referenda without fear of the government presenting its side of the story. Proponents of the proposal had criticized what they described as excessive "government propaganda" during votes in recent years on ties with the European Union and Swiss membership in the United Nations.

Voters also rejected a healthcare reform proposal that had been largely backed by the SVP. More than 69 percent cast "no" votes on the initiative.

It is a debacle for a party that angrily walked out of government last December, threatening to force through its policies in the future by using referenda. SVP leaders had assumed it would win the vote. Instead, they are forced to realize that there are clear limits to what they can achieve. Despite a massive nation-wide ad campaign for its "naturalization initiative," and although proposals dealing with immigration policies are often fiercely contested, in the end it was a clear defeat. 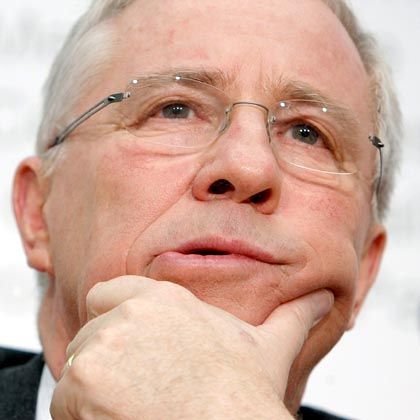 And the defeat was also a personal one for Christoph Blocher, the party's strategist and inofficial leader. In recent weeks, Blocher had travelled throughout the country to campaign for the initiative. Blocher, seen by his supporters as something of a martyr for the unceremonious way he was thrown out of the governing Federal Council last December had publicly admitted the referendum would be a tough fight. But never did he expect such a resounding defeat.

One reason for the rejection is clear: His opponent and succcessor, Justice Minister Eveline Widmer-Schlumpf, was able to persuade voters that, having been denied citizenship at the ballot box and the right to contest the decision in court was unconstitutional and violated international law. The SVP counterargument -- that their initiative would reduce the number of potential criminals becoming Swiss -- was obviously unconvincing to many.

Before the weekend vote, Widmer Schlumpf had also argued that the bill would not be able to prevent the kinds of isolated crimes perpetrated by foreigners -- cases that had been prominently featured in the media. Such coverage, she argued, overlooked that fact that the vast majority of naturalized citizens had never created any problems for the country.

SVP had campaigned for the proposal using a controversial billboard that showed white, brown and black hands eagerly grabbing at a box full of Swiss passports with the title: "Stop the Mass Naturalizations."

The issue of naturalization has always been controversial in Switzerland. In 2003 the voters rejected for a third time a proposal that would have allowed young, second-generation immigrants to become citizens. Foreigners comprise close to 21 percent of Switzerland's population. One reason for this, however, is that naturalization has long been difficult in Switzerland and foreign residents have to wait 12 years to even apply.

Still, the high percentage of foreigners and the country's unique system of direct democracy has prompted right-wing conservatives to seek to curb immigration through national referenda.

But the party's outspoken stance on immigrants didn't appear to be the only reason voters punished SVP. A majority of Swiss object to the confrontational way the party has comported itself in opposition. Indeed, on Sunday, yet another example of the party's cutthroat brand of politics could be seen. In an 81:5 vote, the SVP leadership threw out the party section from the canton of Graubünden -- and thus rid itself of the pesky Justice Minister Eveline Widmer-Schlumpf. Last December, Widmer-Schlumpf was voted into the government in place of Blocher. The internal party vote on Sunday was the end of a months-long SVP campaign against one of its own members -- a campaign the likes of which had never before been seen in Switzerland.

The party had urged Widmer-Schlumpf not to accept her election to the government. Her decision to take the position of justice minister immediately transformed her into a traitor in the eyes of most in the SVP. The fury felt by many was made even worse when a television documentary suggested that Widmer-Schlumpf had conspired with the SVP's political opponents prior to the vote, an allegation she has denied. Still, her house was vandalized and she received death threats, not exactly standard political fair in Switzerland.

Such treatment meted out to a member of government was a novelty in politically demure Switzerland and many in the country were outraged. The seven members of government in Switzerland have always been treated with respect -- even if a party's first choice is sometimes ignored. In the past, political parties have kept their frustration to themselves. Intensifying the anger is the fact that Widmer-Schlumpf was well respected as a sober and competent member of government by many.

The party could now be facing political isolation, despite its recent successes in canton votes. The results from Sunday's election could indicate that the SVP is losing its foothold in the Swiss political center -- a center that has in the past often provided the party with an important boost at the ballot box.

In the past the SVP was able to mobilize referendum majorities that in some cases went well beyond its traditional voter base, and this has always been a source of strength for it. On its core issues in particular -- stymying immigration and opposing deeper integration with the neighboring EU -- it scored a series of successes that earned it the respect of the country's other big parties. Conservative voters of the two centrist parties FDP and CVP succumbed to Blocher's rhetoric on several occasions. But at the time the SVP was also represented in government, and pursued a successful double game.

Blocher may have miscalculated by positioning the SVP as an opposition party. Its loss of government influence has made it harder to win referendums. Besides, Blocher is 68 now and his 33-year-old protégé Toni Brunner lacks his eloquence and political skills.

But it's far too soon to write off Blocher. The next big fight is already looming in 2009 with a vote on continuing a Swiss-EU agreement on labor mobility. The deal itself is uncontroversial in Switzerland but there is opposition to extending it to citizens from Romania and Bulgaria. The SVP wants to vote against that extension in a referendum in a referendum that could wreck the entire bilateral deal that currently offers Switzerland a kind of a-la-carte membership of the EU.

After the latest referendum, Blocher's opponents will be a little less afraid of that vote.