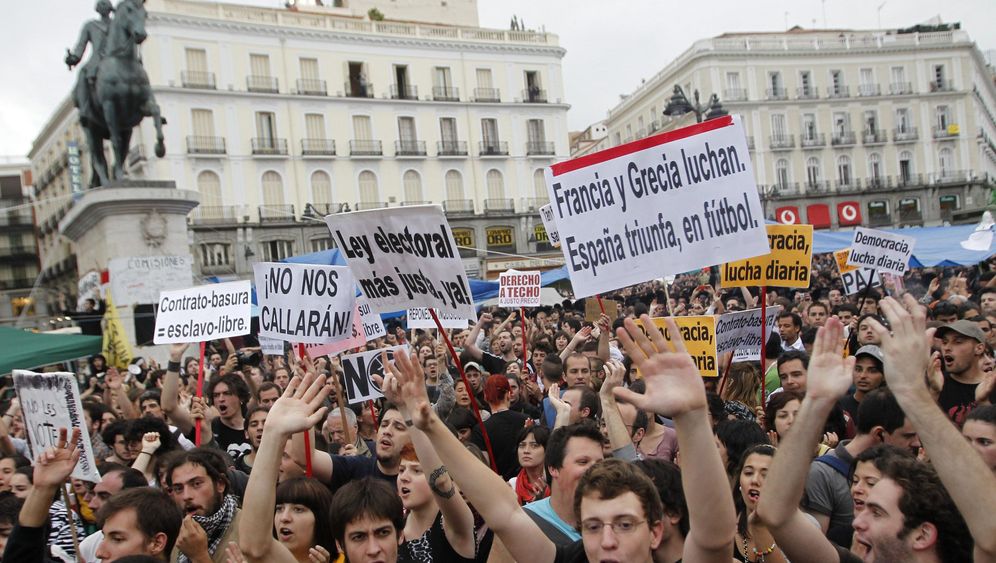 They have been dubbed the "lost generation," with many of them unable to find jobs and forced to live at home as a result of the economic crisis. But now Spain's young people appear to have found their voice -- and they are taking their anger with their country's politicians into the streets.

Protests are continuing on Madrid's landmark Puerta del Sol square on Thursday. Many thousands of young people gathered on the square on Wednesday, defying a ban on the demonstration. BBC reported that as many as 2,000 stayed the night on the square.

The young people are protesting against high unemployment, the Spanish government's handling of the economic crisis and the political establishment. They want a boycott of the major political parties, the ruling Socialists (PSOE) and the center-right opposition People's Party (PP), in this weekend's elections. Over 8,000 municipal and 13 regional elections are being held on Sunday.

The protesters say they will stay on the square until the elections take place. Around 500 riot police were reported to be present on the square on Wednesday but did not intervene.

The Spanish media has dubbed the protesters the 15-M movement, as the protests began on May 15. Demonstrations were held on Puerta del Sol on Sunday and Monday. Police removed demonstrators on Tuesday, but they returned later, with many staying overnight. Other demonstrations have taken place in dozens of other Spanish cities.

On Wednesday, the Madrid electoral board banned the demonstration, arguing that it could influence Sunday's elections, but protesters defied the ban to assemble on the square. Spain's central electoral board is now planning to make a ruling for the whole country, given that regional officials in various cities were making different decisions regarding demonstrations. The left-wing United Left (IU) party, which supports the movement, accused the PP and Socialists of orchestrating the Madrid ban. The demonstrations have become a signficant, if unexpected, factor in the election race, with different parties choosing to support or oppose the protesters.

The demonstrations have been organized using social media such as Twitter and Facebook, prompting observers to make comparisons to the Tahrir Square protests in Egypt that helped topple dictator Hosni Mubarak.

'I Have No Political Direction'

Unemployment under 25-year-olds in Spain is at a staggering 45 percent. "I have no political direction and that is what I want to change," one protester who gave her name as Mamen told the news agency Reuters. "I want to participate in politics." She said she did not feel represented by either of the two main political parties.

Spain's growth is lagging behind that of Central European countries and unemployment is at over 21 percent, the highest in the European Union. Austerity measures aimed at sorting out the country's finances have worsened the country's economic situation.

The popularity of Prime Minister Jose Luis Rodriguez Zapatero has suffered as a result. Previously, protests in the country have been limited, however, partly because of Spanish unions' ties to Zapatero's Socialists.