"We can do it." These are the four words that are dividing Germany. It has now been exactly one year since Chancellor Angela Merkel announced her motto for overcoming the refugee crisis. Even though many of her critics can no longer stand to hear her "approach to tackling the problem," as she recently described it in an interview with the Süddeutsche Zeitung, the chancellor isn't backing down.

Germany has achieved a lot, Merkel says today, but there is also much left to be done. So where do we stand? What have we achieved? And where have we fallen short?

More than a million people came to Germany in the past year, from Syria, Iraq, Afghanistan, North Africa and the Balkans. Even the chancellor, who had so vehemently resisted the ceiling on the number of refugees allowed into the country proposed by Bavaria's conservative Christian Social Union (CSU) party, was soon promising to "noticeably" reduce refugee numbers.

This effort was successful, even though it wasn't Merkel's achievement. About 220,000 migrants were newly registered in the first half of this year. The numbers have declined month after month. According to Germany's nationwide EASY registration system, 92,000 migrants and refugees were registered in January and only about 16,000 in July.

There are two reasons for this decline. The first is that after months of chaos the southeastern European countries have sealed off the Balkan route -- without outside help. The second is that Turkey, as part of a morally dubious deal with the EU, is preventing refugees from continuing to Europe.

Whether this pact remains in place is now more uncertain than ever, following the attempted coup in Turkey. At the same time, migration pressure remains high as the war continues to rage in Syria. Refugees are now searching for alternative routes.

During the first months of the refugee crisis, the Federal Office for Migration and Refugees (BAMF) became the poster child for the bureaucratic failures of the German government. But BAMF has since become "significantly more efficient," according to agency head Frank-Jürgen Weise. It has increased its staff from 2,300 employees in early 2015 to 8,000 today, and dozens of new offices have been opened.

BAMF made more than 330,000 asylum decisions during the first seven months of this year, an increase of 146 percent over the same period last year.

At the same time, however, the mountain of pending applications has grown to more than half a million. Contrary to original plans, BAMF will be unable to process these applications by the end of the year. Agency officials attribute the delays to the large number of complicated, older cases, which continue to drive up the average processing time to more than six months today. On the other hand, says Weise, BAMF does its best to decide on new cases within 48 hours.

According to Weise's plan, all refugees in Germany will at least be able to submit an asylum application by the end of September.

Chaos is now a thing of the past. Germany has found housing for about a million refugees. There are thousands of empty beds in emergency shelters, and a large share of the roughly 1,000 repurposed gymnasiums are no longer needed, now that refugees have been able to move to so-called standard accommodations. But these are often temporary and include repurposed shipping containers.

Efforts to house refugees and migrants have been more successful in smaller cities and towns than in metropolitan regions. According to public broadcaster WDR, 9,000 people still live in emergency shelters in the western state of North Rhine-Westphalia, even though there are almost 14,000 beds available in regular housing.

In Berlin, dozens of gymnasiums are still reserved for refugees, and authorities there say the makeshift shelters currently house more than 5,000 people. And although the city administration had promised that the gymnasiums would be empty again by the beginning of the year, that is now likely to take several more months. In the German capital, a total of 23,600 refugees and migrants are still living in emergency shelters, including hangars at the city's former Tempelhof Airport. Some 60 new group housing units are being built to provide more permanent housing for these refugees.

Federal Environment and Building Minister Barbara Hendricks, a member of the center-left Social Democratic Party (SPD), has tripled funding for the construction of subsidized housing to 1.5 billion euros ($1.68 billion) for 2018. Hendricks is also pushing for the repeal of a constitutional amendment that went into effect in 2006, that shifts responsibility for construction of social housing entirely to the state level. Under those rules, the federal government is only authorized to provide the states with financial assistance for subsidized house until 2019. But Hendricks has argued that Germany is suffering from an acute shortage of social housing and that the problem is too large for the states to handle on their own.

The real test is whether Germany can integrate hundreds of thousands of new residents. But the country has already run into problems in the first step of the process: language and integration courses. In April, BAMF head Weise estimated that there will be a shortfall of about 200,000 slots in these courses this year alone.

The federal government has announced plans to massively expand the program, which often suffers from a shortage of teachers, and from the fact that pay has been modest. To address the problem, wages paid to teachers of these courses were raised significantly on July 1. Still, the task remains enormous, with the BAMF anticipating about half a million course participants for 2016.

Only those refugees and migrants with strong prospects of remaining in Germany have access to the courses. For instance, close to 80,000 Afghans who had submitted asylum applications by the end of July are ineligible to participate in federal integration courses.

Refugee children pose another challenge. Statistics from KMK, the national body representing education ministers from the 16 federal states, indicate that 325,000 refugee children and adolescents were integrated into the German school system in 2014 and 2015. They now comprise 2 percent of all schoolchildren nationwide. To address their needs, schools need additional teachers and social workers trained to work with traumatized children.

An informal SPIEGEL ONLINE poll of officials in the German states in the spring, found that 12,000 new teachers had already been hired. But GEW, a union representing educators and scientists, estimates that more than 20,000 teachers are still needed. Some state education ministries have already written to retirees asking them to return to work, indicating a lack of applicants for the new positions.

More than 100 companies are participating in the "Us Together" integration initiative launched a few months ago. So far, 1,800 internships, more than 500 training positions and more than 400 full-time positions have been filled with refugees. But these numbers are still too small, says Chancellor Merkel, who has invited the leaders of major German corporations to a refugee summit in September.

So far, very few refugees have succeeded in breaking into the job market. According to the Federal Labor Office, 322,000 refugees were registered as seeking employment in July -- in other words, those whose asylum applications had already been approved. Refugees and migrants have no access to the job market until they have been granted asylum. Of the 322,000 registered refugees, 141,000 were unemployed. Many speak little or no German at all or have inadequate education. However, the majority are still young, and the hope is that migrants can be integrated into the labor market through education and training programs.

Germans were alarmed by the New Year's Eve assaults in Cologne. Had Germany introduced a crime problem by allowing the refugees into the country? Of course, the normal statistical probability also applies to refugees. In any group of a million people, there are bound to be those who do not abide by the law.

But the statistics compiled by the authorities also show that the probability is no higher among refugees than in the domestic population. According to police crime statistics, the number of criminal acts increased by about 4 percent in 2015 over the previous year. The increase was mainly attributable to a rise in asylum- and visa-related offences. If these offences are factored out of the equation, the number of criminal acts remained virtually constant, even though the number of people in the country had increased by hundreds of thousands.

The events in Cologne triggered a debate about whether a perpetrator's country of origin should be mentioned in connection with the offence. In fact, there is no denying that a certain group of immigrants are more likely to attract the attention of law enforcement. According to the Federal Criminal Police Office (BKA), migrants from Algeria, Morocco and Tunisia are suspected of committing a crime significantly more frequently than people from other countries.

In one respect, the refugee crisis has led to an increase in crime statistics. But in this case the migrants are the victims, not the perpetrators. This year, the BKA has already recorded 665 assaults on refugee accommodations. There were 1,031 such assaults in 2015, or five times as many as in the previous year.

The attacks in Würzburg and Ansbach also cast a spotlight on the possible relationship between immigration and the risk of terror. Both perpetrators came to the country as refugees, albeit before last year's big migration wave. Both were not previously on the radar of security authorities.

The authorities routinely follow up on tips about the alleged Islamist activities of refugees. There was recently talk of more than 400 such reports, but investigators have yet to uncover concrete plans for an attack. However, the Federal Office for the Protection of the Constitution, Germany's domestic intelligence agency, is concerned that radical groups are trying to recruit members in refugee hostels.

A tiresome topic in politics -- the "accelerated repatriation of rejected asylum-seekers" is part of every action plan. The number of deportations in Germany has in fact risen considerably. However, the system still does not appear to be efficient.

According to the central register of foreign nationals, there are currently more than 220,000 people in Germany who should be required to leave the country. Of that total, 172,000 are officially tolerated because, for example, there are wars raging in their native countries.

But there are also plenty of other reasons preventing deportations.

The European Union is drifting apart with Brexit and squabbling between member states, Merkel's conservative Christian Democrats and their Bavarian sister party, the CSU, are at odds, and the Alternative for Germany party is doing well in the polls. In fact, the right-wing populist party even threatens to overtake the Christian Democrats in the state parliamentary election in the eastern state of Mecklenburg-Western Pomerania on Sunday, Sept. 4.

The refugee crisis is shaking up politics and polarizing society. Thousands of Germans are volunteering to help refugees, taking over where the authorities are too slow or overburdened.

On the other hand, many fear that refugees are changing the country. Xenophobic sentiments are on the rise, people are taking to the streets to protest what they see as the Islamization of Germany, citizens are trying to block refugee housing and politicians are berated as "traitors." "Germany will remain Germany," Chancellor Merkel tells these self-appointed concerned citizens, "with everything that is near and dear to us." But it remains completely unclear whether and when the cracks in German society will be repaired. 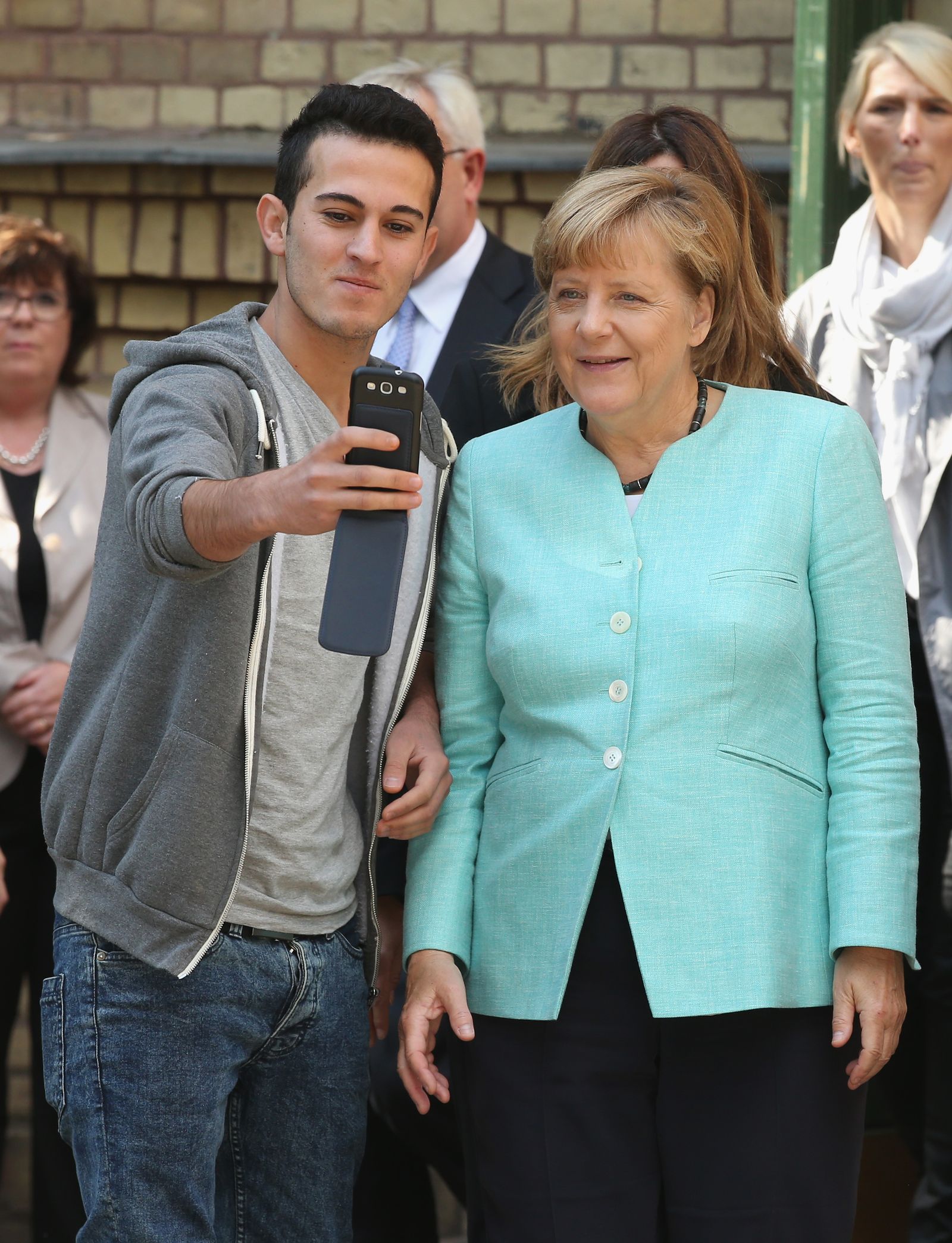 A now iconic Merkel selfie with a refugee 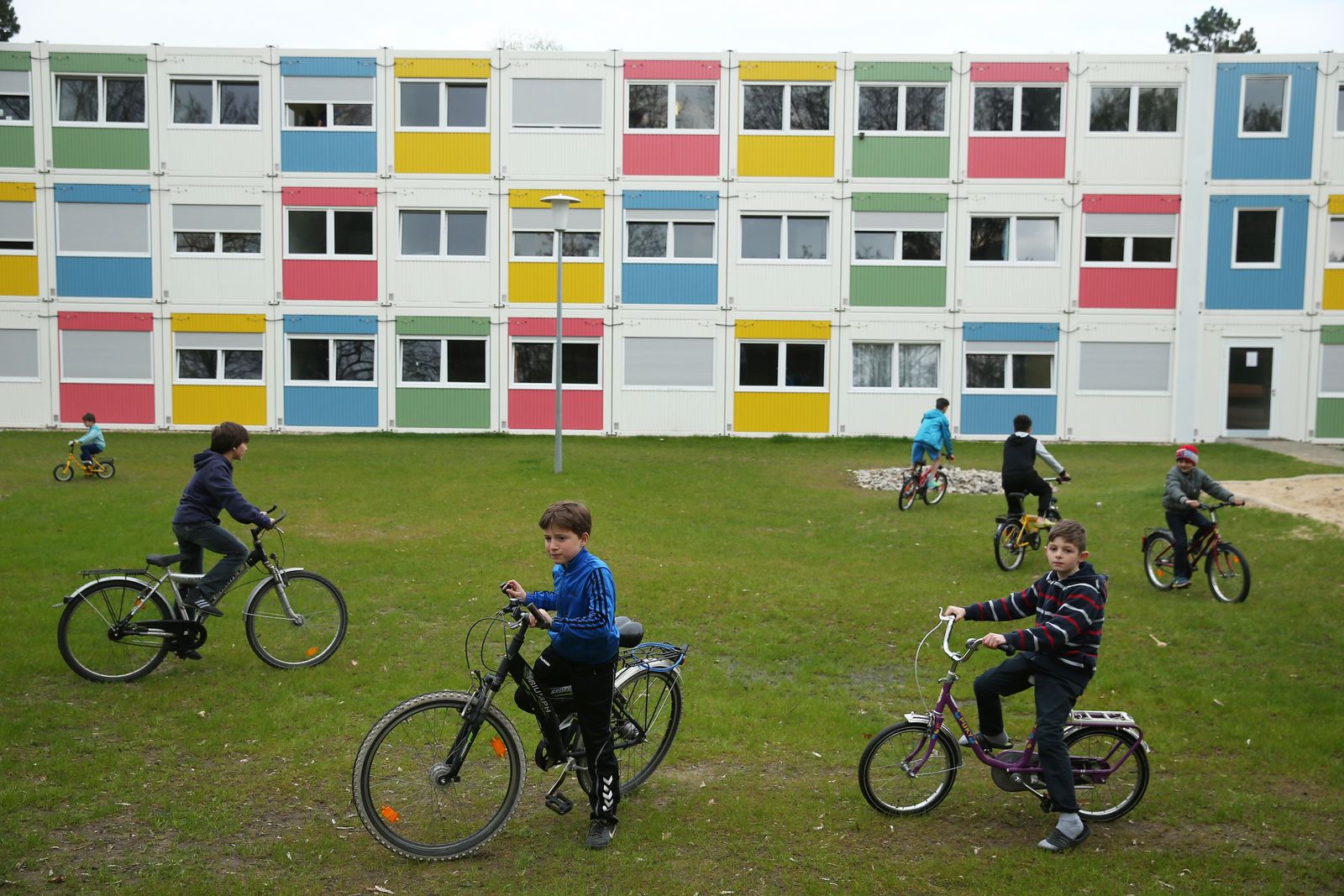 Children play at a container settlement shelter for refugees in Berlin. 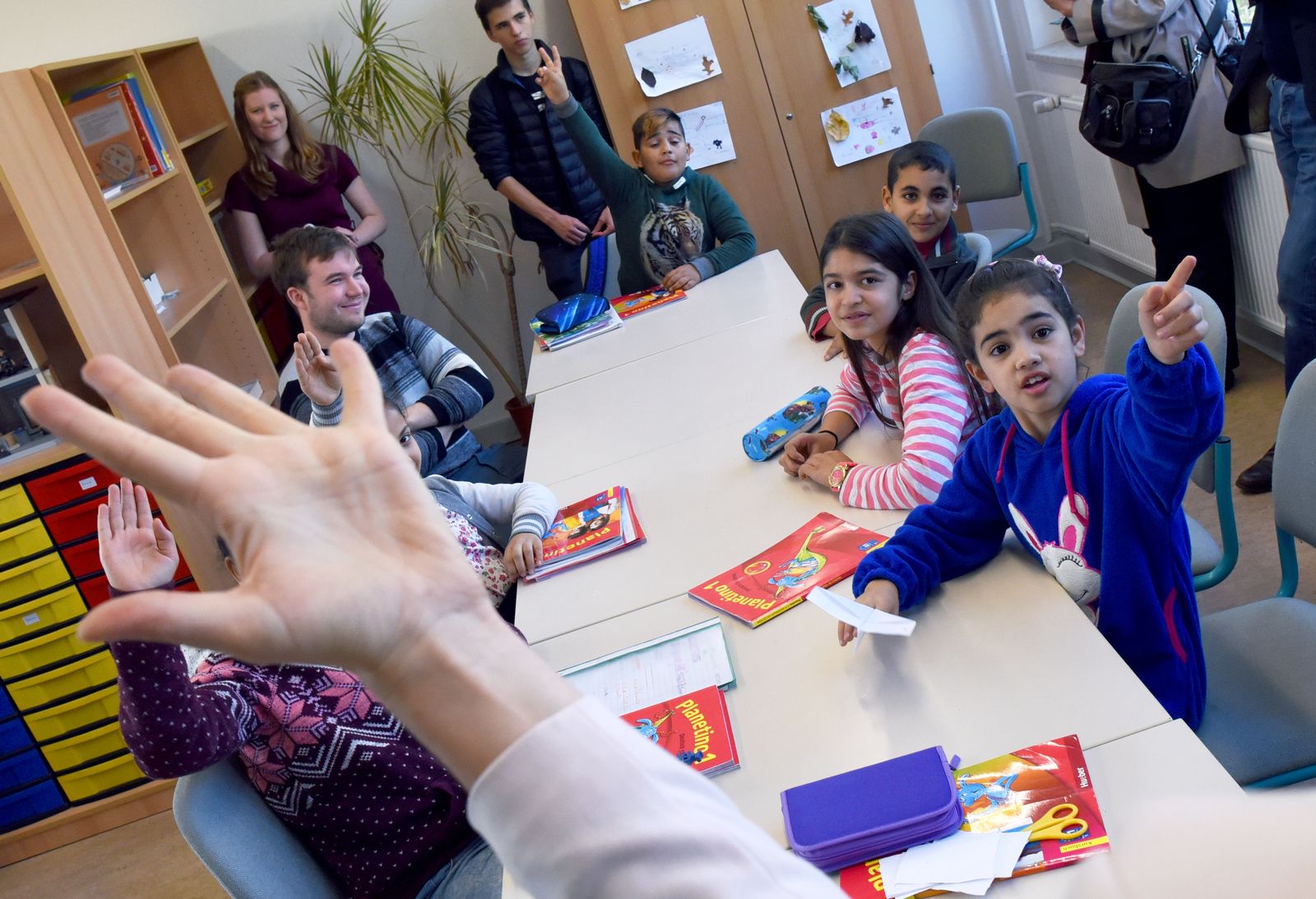 Refugee children at a school in Potsdam in October 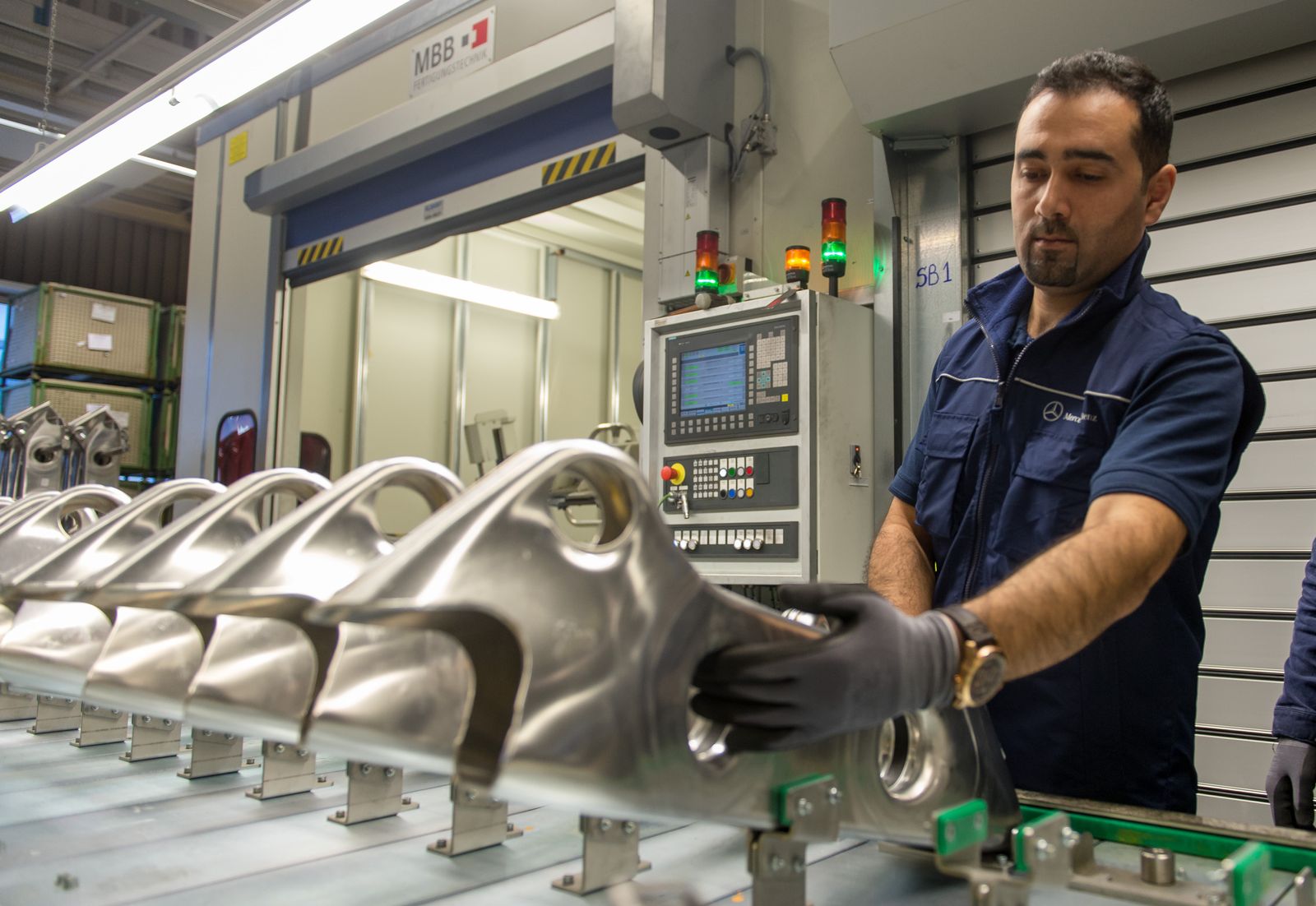 Mohammed K. during a internship at Daimler in the city of Esslingen near Stuttgart. 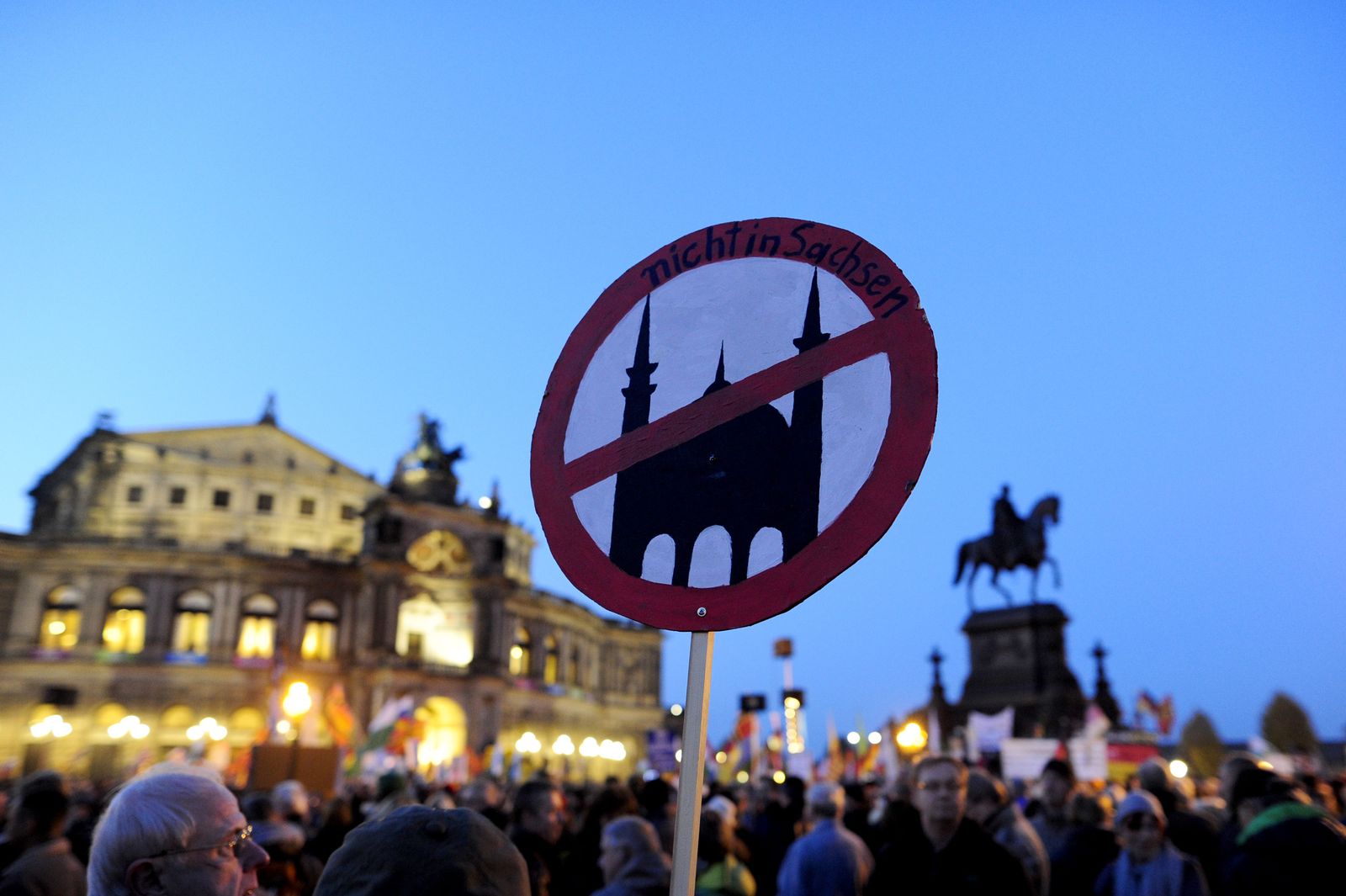 An anti-Muslim protest by the group Pegida, an acronym for Patriotic Europeans Against the Islamization of Europe, in Dresden in October