This is not the sort of snow that drifts gracefully from the heavens. Instead, it surges rhythmically from the narrow opening in an otherwise windowless building, hitting the ground with a thud.

The glacial ski resort in Pitztal, a valley in Austria's Tyrol region, is now capable of producing nearly a thousand cubic meters (35,000 cubic feet) of artificial snow a day, regardless of temperature and natural precipitation. The system, called the "All Weather Snowmaker," originates in Israel, and will "sustainably secure" ski tourism in the area, says Martina Dobler, spokeswoman for the local tourism organization. 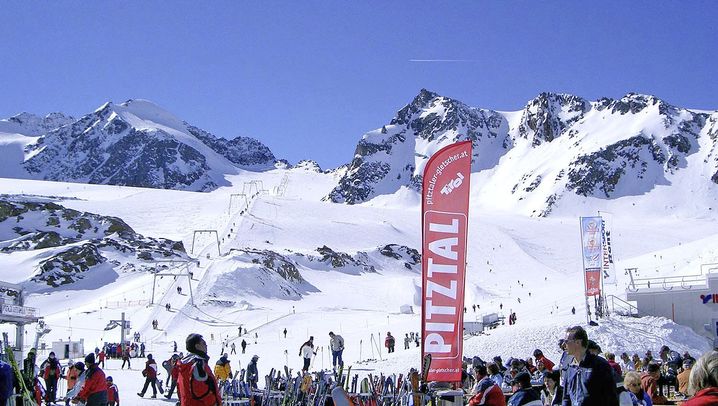 That word choice might cause some chilly dissonance in the ears of nature lovers. "Sustainability" usually only comes to the lips when the topic is saving the planet -- and pouring artificial powder onto ski slopes that are melting due to climate change hardly fits that definition.

But the All Weather Snowmaker could be a blessing for Pitztal's local economy. In fact, it could be the last chance to save the valley from ruin.

Austria's highest elevation glacial ski region, whose cable car reaches 3,440 meters (11,290 feet), used to be accessible for winter sports year-round. Now the industry shuts down between May and September. In recent years, the season has kicked off, with increasing difficulties, in mid-September. The reason for the delay: The slopes have literally run away.

By the lift's lower terminal at 2,840 meters (9,320 feet), marketing director Willi Krüger points to a wooden post sticking out of the ground. "The glacier used to reach this far," he says. The entrance to the gondola was accessible by ski year-round. Now the glacier doesn't start until another 200 meters (660 feet) further up. Below lie boulders, making the approach even more difficult.

Snow falling on an alpine meadow quickly forms a good ski slope. Glacial areas, on the other hand, are more like rocky moonscapes. Without an ice crust, new snow doesn't form quickly into a surface appropriate for skiing. Snow machines don't help much either. For one thing, they can only be used when the weather is below freezing, because the state of Tyrol forbids the bacteria and chemicals that in other areas mean snow can be created at above-freezing temperatures. In addition, the autumn cold often brings strong winds, which make it impossible to lay a complete snow covering. "The stuff flies around everywhere, but doesn't land where you need it," Krüger complains.

The region had a real problem. The early season is its trump card. Professionals and youth teams from many countries start their training here in late summer -- and lifts filled with prominent alpine athletes and their high-tech equipment lures other tourists.

But that only works if the lower end of the lift is accessible. If those last 200 meters are missing, the whole experience becomes significantly more arduous.

The slope needed an artificial limb. And there were big celebrations in Pitztal when it turned out just such a thing was available in the form of the All Weather Snowmaker.

Israel-based IDE Technologies Ltd. is one of the major players in the world of artificial snow. Located near Tel Aviv, the company has been working with a vacuum ice technique for more than 15 years. At first the process was intended to be used for seawater desalinization, but now it is predominantly used to create enormous quantities of snow as a coolant for gold mines.

Large-scale systems in South Africa, for example, manufacture up to 2,000 cubic meters (70,600 cubic feet) of snow a day. This is used to bring temperatures in the kilometers-deep mines, sometimes reaching over 60 degrees Celsius (140 degrees Fahrenheit), down to a level humans can survive. The engineers sometimes modeled miniature ski slopes on the surface of the snow as a joke, but project manager Moshe Tessel explains, "No one was imagining a new business opportunity."

The idea came into being in the unusually hot summer of 2003, when the sweating alpine world started to draw increased media attention. The fears surrounding global warming reached a bitterly comic high point as ski resort owners wrapped their slopes in the kind of insulated blankets usually used for accident victims. Tessel saw the pictures and knew: "We have something that can help."

The artificial snow used in mining turns out to be a useful material to repair glaciers, it has an extremely compact consistency which makes it perfect for glacier remodeling. It was used in Pitztal this September for the first time. Employees transported the artificial snow to the melting edge of the glacier with wheeled loaders and snowcats and then rebuilt the slope. Within just a few days, the white surface stretched as far as the lift terminal once again. "This system allows us to guarantee the punctual start of the season," Krüger says.

An economist originally from Lübeck, Germany, Krüger came to Innsbruck in Tyrol as a student in the 1970's. He speaks an amusing mixture of northern German and western Austrian dialects and is one of the founding fathers of Pitztal's glacial ski scene, where he still works.

With a starting investment of 320 million schillings, now the equivalent of $34 million, the practically uninhabited valley was transformed into a wintry amusement park in the early 1980's. Today there are 7,400 people living in Pitztal, maintaining 8,300 guest beds. The villages are neither beautiful nor terrible, there's not a romantic alpine atmosphere but they try to compensate with seafood pizza and sauvignon blanc.

A funicular line stretches nearly four kilometers (2.5 miles) along the mountainside to a no frills professional ski area. Here the end station offers a self-service restaurant with all the charm of a cafeteria. Standing not far away from the terminal, the ice-making building fits in perfectly with the prevailing architectural style, built in the shape of a cube and composed mainly of concrete.

Inside, two cylindrical containers connect to a network of pipes. Water at five degrees Celsius (41 degrees Fahrenheit) is pumped into the larger of the two vats, where it undergoes a vacuum reaction. The water quickly changes state, settling to the bottom as a soupy mix of snow slush.

This slush then arrives in the smaller vat, where it's compacted and slowly pushed up out of its plastic sleeve, looking much like some brands of ice cream. Above, a rotating scraper sweeps the lumpy snow along a chute and out the window.

The ski resort operators in Pitztal know well that this industrial-scale snow factory is a delicate subject, environmentally speaking, and they have their arguments at the ready to defend their miracle machine against the attacks they can expect from critics.

Water waste is one hot topic when it comes to artificial snow production. Feeding snow machines from mountain streams is seen as a serious environmental offense.

Glacial regions, however, can take advantage of a natural cycle. As the ice thaws, it discharges water. In Pitztal, this runoff collects in two reservoirs. The operators of the All Weather Snowmaker are quick to point out that their production is carried out exclusively using this runoff.

Winter Sports as an Energy Guzzler

Then there's the matter of power consumption. That certainly can't be ignored, but it can be put in perspective by comparing the Snowmaker's consumption with that of the rest of the energy-hungry alpine resort. With its maximum output of 235 kilowatts, the snow machine is a drop in the ocean in contrast with the ski infrastructure: One large chair lift alone requires double that amount.

The modern world of organized winter sports is an energy guzzler, with or without artificial snow. The electrically powered snow factory is the worst of the ski resort's equipment only in the sense that by manufacturing this "white gold," it forms the basis that allows the entire business to keep running -- and will do for a long time yet.

These initial encounters with the snowmaker suggest that, for the foreseeable future, the machine will continue to outpace the effects of global warming. Replacing the summer's melted-off ice in September was child's play, and the machine from the promised land is clearly capable of supplying more frozen goods than the summer can melt away.

In the end, the distressing experience of watching the glacier recede may, in the end, boost confidence that everything can be solved with technology. Running continuously, the Snowmaker could probably even make the glacier grow, serving as a reminder of a problem which once blighted Pitztal.

"Around 1900," Krüger relates, "the people here prayed for the glacier to recede to save their houses."

Back then, Pitztal's citizens lived a very pious life.