These days, his statesman's uniform fits the former rebel commander perfectly: bespoke shoes, dark suit, golden cuff links. Flanked by reverent-looking toadies, Ramush Haradinaj recently sat down for an interview in Pristina, at the seat of the Kosovo government.

If it weren't for Haradinaj and his comrades, Europe's youngest republic might not exist. In the nineties, at the fiercest phase of the ethnic Albanian revolt against the Serbian occupiers in Kosovo, he commanded part of the Kosovo Liberation Army, a paramilitary organization known by its Albanian initials UCK. Haradinaj's nom de guerre was "Smajl." Today he is the head of government in a country searching for its place in Europe.

Twenty years after the NATO bombings that, starting on March 24, 1999, forced the withdrawal of the Serb-dominated Yugoslav army, Kosovo remains the problem child of the Balkans. This tiny country, with barely 2 million inhabitants, 90 percent of whom are Albanian, is currently not recognized by more than 80 countries around the world, including five EU members. That insecurity is impeding the country's progress. Its citizens are the only Europeans west of Belarus who still require a visa to travel to the Schengen area. Every third employable resident is jobless.

Potentially even more alarming, discussions about the country's borders have recently cropped up -- the kind of talk that many people thought had faded into the past. Leading ethnic-Albanian politicians in Kosovo argue about whether the Serb-dominated north of the republic should be left to Belgrade as part of an exchange of territory. The presidents of Serbia and Kosovo discussed this question under the oversight of Federica Mogherini, the EU's chief diplomat, but Prime Minister Haradinaj rejects any such proposals, claiming they are dangerous nonsense. "The tragedies in the Balkans always had to do with borders," he says. "Whoever raises these questions again now invokes new tragedies."

Over 13,000 people died between February 1998 and June 1999. Haradinaj knows the horrors of the Kosovo War. The former commander has stood before the International Criminal Court in The Hague twice for crimes against humanity, including murder and rape. He was ultimately acquitted both times. "I did what was necessary," he says, looking back. Though he makes it sound like he didn't even participate. He claims that during the war, and afterward, it was about "surviving in a lawless society." Even today, in his statesman's uniform, Haradinaj is a fighter. With customs duties of 100 percent on imports from Serbia, he is trying to force the government in Belgrade to recognize Kosovo -- and, in the process, is riling up the United States, the country's protector.

Ever since the autonomous province of Kosovo was allowed to cut itself free from Serbia in 2008 with the explicit permission of Madeleine Albright, Washington's ambassadors have been the secret rulers of this country. But these days, U.S. President Donald Trump's man in Pristina is facing resistance. Haradinaj coolly explains that the custom duties were a "sovereign decision of the Kosovar government." In other words, it means Pristina is no colony of Washington's and reserves the right to take revenge for things like Serbia's most recent veto against Kosovo joining Interpol.

Was this a first step out of the shadow of the American superpower? Haradinaj says Kosovo needs to learn to defend itself: "We had no choice. Serbia has been acting more and more aggressively lately. Our openness and generosity have been misread as weakness."

Although Trump expressed in letters to the heads of state in Belgrade and Pristina that he hoped to be able to sign a "historical agreement" at the White House as soon as possible, a long-term peaceful solution is not in sight. For a long time, a partition of Kosovo was out of the question for Washington. Now it sounds like things have changed. "We no longer have any red lines; if the two countries suggest a deal that involves a change in the borders and that is accepted by the citizens, then that is fine with us," said one high-ranking U.S. official in Pristina, who added that when it comes to the "struggle between the superpowers," Washington is mostly concerned about "maneuvering Kosovo to the West."

That means, into the EU and NATO, which is to say, away from the Russian sphere of influence. The latter begins in the city of Mitrovica, the primarily Serbian part of Kosovo north of the Ibar River, and stretches anywhere in the Balkan region where questions of alliance are still unresolved. In Bosnia-Herzegovina, for instance, Moscow is using logistical and military support to keep the threat of the country's division alive.

In a region in which ethnic Albanians live in several countries and the smallest border movement threatens to upset the balance, Kosovo's unresolved future is dynamite. And then there are the mass protests against the governments in the neighboring countries of Albania, Montenegro and, especially, Serbia, showing the impatience of inhabitants who have been spent years waiting to join the EU.

Anyone who plays with fire in Kosovo -- on the historic fields dotted with medieval monasteries that, according to Serbian myth, are the cradle of the nation -- risks setting off a firestorm. And yet, Mogherini, John Bolton, Trump's national security adviser, and Serbian President Aleksandar Vucic are all considering giving the north of Kosovo to Serbia, and offering the mostly ethnic-Albanian Presevo Valley to Kosovo. Kosovar President Hashim Thaci is also in favor of this, but is largely alone in his own country in having that stance.

The unwritten, but internationally respected agreement not to change any of the old internal Yugoslav borders is now being questioned. It is a dangerous precedent. Who then could deny the Bosnian Serbs an alliance with Serbia, or the ethnic-Albanian North Macedonians one with Albania?

Anyone who visits Mitrovica in northern Kosovo sees posters behind the Ibar Bridge depicting the presidents of Russia and Serbia, Vladimir Putin and Aleksandar Vucic, peacefully assembled under the Cyrillic headline "We are brothers -- god stands with us." Oaths of loyalty between Russians and Serbians are not only a part of folklore here. They are also a geopolitical calculation.

The tone in Kosovo has gotten sharper. Its own protection force could gradually be turned into a regular 5,000-strong army. To date, NATO has guaranteed security in the country. Its secretary general, Jens Stoltenberg, has warned against serious repercussions in the relationship with the alliance.

And because Albania's head of government, Prime Minister Edi Rama, is angry about what he sees as a stalling tactic by the EU, he is now threatening to bring the ethnic Albanians in Kosovo back to the motherland. He considers a joint head of state and foreign policy a serious alternative to EU membership.

The border between the two states is already fluid and those traveling from Kosovo to Albania encounter only superficial inspections. In Pristina government circles, the creation of a "mini Schengen" in the western Balkans is already under discussion -- an option that would unite Albanians who live on either side of the border. A shared experience of injustice and the blood splattered through the mountain landscape have brought together the people on both sides of the border.

As of recently, potential Albanian war crimes are once again being addressed in The Hague. Under examination is the degree to which the Kosovar guerrilla army, UCK, may have incriminated itself. Many of the country's leading politicians were once members of the group. Since January, an international court subject to Kosovar law has been taking part in negotiations. Old wartime comrades of Prime Minister Haradinaj have already been invited, and it has intentionally been left unclear whether they are to appear as accused or as witnesses.

In the godforsaken Tropoja, on the Albanian side, two men in a cemetery are pointing, without hesitation, at the grave of a UCK fighter who died on this side of the border -- and where one of his brothers later placed the severed heads of two Serbian soldiers. There are photos proving the gruesome ritual murder occurred.

The government in Pristina is arguing that possible war crimes carried out by the Albanian side can of course be investigated. But patience among the ethnic-Albanian population is running thin. Investigations took place under UN supervision until 2008, then came the International Criminal Court in The Hague, and the EU's EULEX mission. If a special court were to investigate the UCK once again, it would likely not be well-received.

The West's grotesquely inconsistent approach is exemplified by the fact that ex-commander Hashim Thaci, now president of Kosovo, and Fatmir Limaj, the deputy prime minister, may currently negotiate with head EU diplomat Mogherini through different channels despite the fact that both of them were heavily involved in wartime activities of the UCK.

"There are, of course, some people on both the Albanian and Serbian sides who say, 'I won't negotiate with that bastard over there,'" admits a leading U.S. official in Pristina. But the Trump administration, he says, wants to achieve a historical solution similar to a Korea deal: "We need to make progress. The status quo in Kosovo is critical -- either the relationship between the two countries will improve, or it will go completely down the drain."

As long as the EU doesn't manage to show Kosovo the path forward, and do so as a unified body, the country's course will be set in Washington. Kosovo's prime minister complains that the goals of the Europeans are hard to determine, unlike those of the U.S.: "When our people recently flew to Brussels for discussions with Mogherini, they had a 30-page proposal in their luggage." And what did they get from the EU negotiators? "Nothing," says Haradinaj, "except coffee and water, though free of charge." 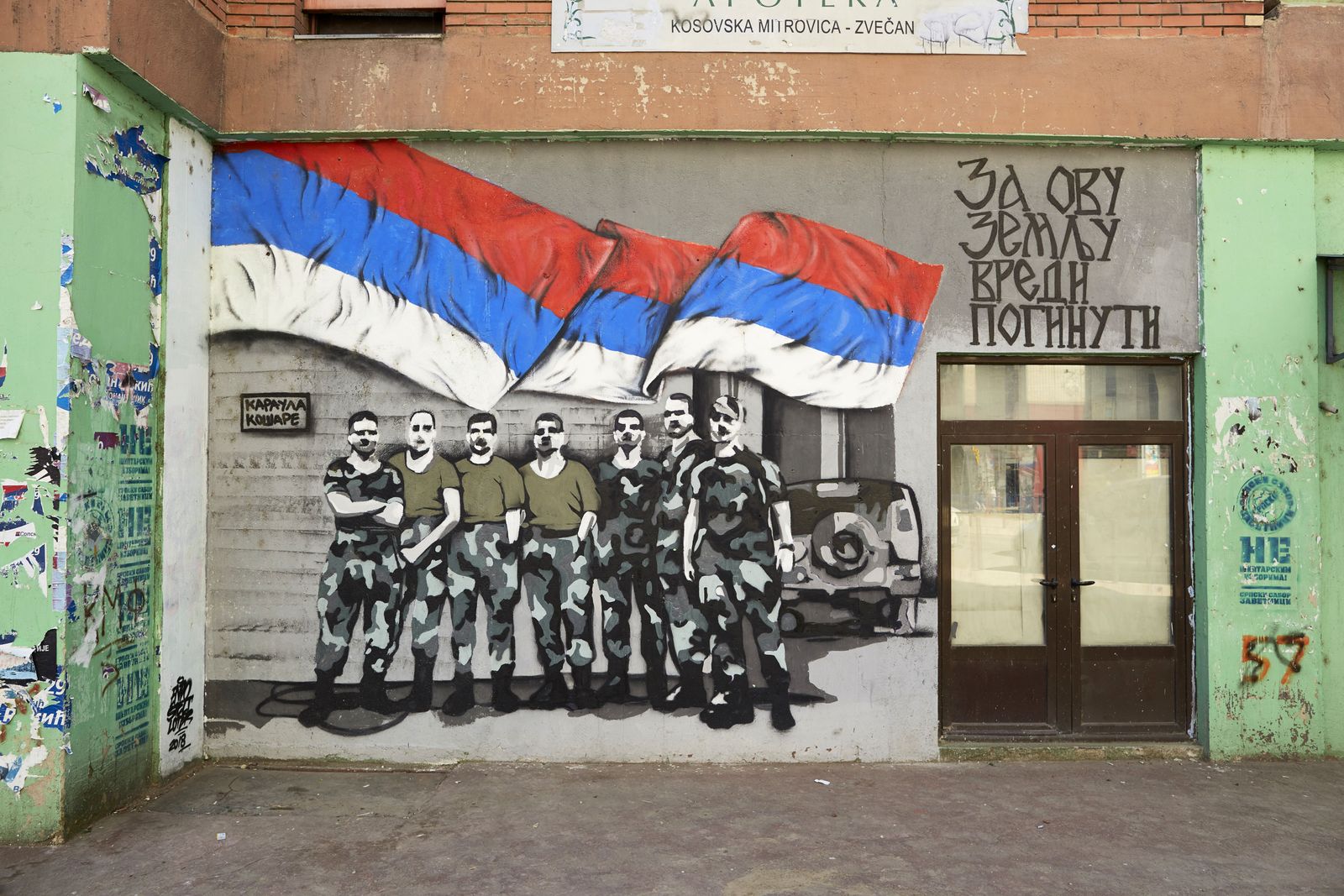