It was a long way to go to deliver a short message. German Chancellor Angela Merkel flew almost four hours last Friday to Cyprus, where she spent a few minutes campaigning for the conservative presidential candidate in the February 17 election, Nikos Anastasiades. Speaking in the city of Limassol, Merkel praised Anastasiades, saying that she had known him for a long time and valued his openness to change, and that the country urgently needed "structural reforms."

After smiling for the cameras, Merkel returned to wintry Berlin.

Her destination in the eastern Mediterranean has a smaller population than the little German state of Saarland, but that hasn't stopped it from becoming one of the biggest trouble spots in global politics at the moment. The question of whether the government in Nicosia should be allowed to bolster its ailing banks with more than €17 billion ($22.7 billion) from Europe's bailout funds is dividing the euro zone, causing uncertainty in international markets and adding to the woes of the coalition government of Chancellor Angela Merkel, made up of her center-right Christian Democratic Union (CDU), its Bavarian sister party, the Christian Social Union (CSU), and the business-friendly Free Democratic Party (FDP). Now that the center-left Social Democratic Party (SPD) and the Green Party have announced their opposition to the plan, Merkel's coalition could for the first time fail to muster a parliamentary majority on an important decision relating to the euro crisis.

The financial woes of Cyprus are a thorny issue for the German government, the mood in global financial markets and, most of all, for Europe's bailout policy. Ever since last fall, when SPIEGEL published a report by Germany's Federal Intelligence Service (BND) on money laundering in Cyprus, it has been clear that an aid program for the country would also benefit Russian oligarchs who have deposited billions in assets from dubious sources on the Mediterranean island. According to the BND analysis, if Brussels released the requested aid money, German taxpayer funds could very well be used to protect the illegal assets of Russian business magnates.

This realization triggered hectic activities in various places. In Brussels, the Euro Group of euro zone finance ministers postponed its decision on the bailout program last week, while donor countries like Germany, Finland and the Netherlands voiced concerns. In Cyprus, the government is trying to show it's tough on tax dodgers and money laundering. "Cyprus is no tax haven," Finance Minister Vassos Shiarly insists in an interview with SPIEGEL.

The euro rescuers face a dilemma. On the one hand, they want to prevent the country from going bankrupt. On the other hand, they lack the support of a majority of member states for an aid program that would mostly benefit rich Russian tax fugitives.

The tricky situation is prompting European leaders to do what they always do when a crisis comes to a head: play for time. They want Nicosia to satisfy additional conditions in the fight against tax dodgers and economic criminals. At the same time, Brussels is hoping that current President Dmitris Christofias will be ousted in the February election.

It wants a change in government on the island to show the European public that the Mediterranean country is indeed prepared to clean up its act. Experts agree that, for decades, Cyprus has seen itself as a prime destination for honest and dishonest investors from around the world. Until now, someone who wanted a safe haven for his money could simply take a plane to Nicosia, because the country is an EU member and yet is lax when it comes to financial regulation, say German investigators.

The Russians are particularly well of the island's attractions in this respect. Last year, once again, entrepreneurs from Moscow and St. Petersburg moved about $60 billion in assets out of the country, much of it through Cyprus. Several dozen oligarchs and financial sharks have set up offshore companies in Cyprus, where they can protect their assets, at very favorable tax rates, from the Kremlin-controlled Russian justice system.

The list of Russian investors in Cyprus is almost identical with that of the country's richest men. Together with a partner, Roman Abramovich, known internationally as the owner of some of the world's largest private yachts and London's Chelsea Football Club, controls his Evraz holding company through a Cyprus-based company, Lanebrook. The financial magnate and former presidential candidate Mikhail Prokhorov, who owns mining companies in Russia, registered Intergeo Management Ltd. in Cyprus in 2008. Magnate Vladimir Lisin, worth an estimated $15.9 billion, controls more than two-thirds of his most important company, a steel mill in Novolipetsk, through the Cypriot company Fletcher Holding Ltd.

Owners of other companies registered in Cyprus include Lisin's competitor Alexei Mordashov (worth $15.3 billion), nickel tycoon Vladimir Potanin ($14.5 billion) and oil baron Vagit Alekperov ($13.5 billion). There is also Suleyman Kerimov ($6.5 billion), a dubious investor who was interested in buying a three-percent stake in Deutsche Bank in 2008, and Internet czar and friend of Prime Minister Dmitry Medvedev Alisher Usmanov, who topped the list of Russia's richest men last year at $18.1 billion. Yelena Baturina ($1.1 billion), the wife of former Moscow Mayor Yury Luzhkov, who has been accused of corruption by the Kremlin, has also allegedly moved some of her assets through Cyprus.

The case of fertilizer magnate Dmitry Rybolovlev shows how closely intertwined Russian oligarchs are with the Cypriot financial system. More than two years ago, Rybolovlev increased his share in the Bank of Cyprus to just under 10 percent. This makes the Russian, whose assets are estimated at $9 billion, the biggest single shareholder in the Mediterranean country's most important bank.

In the 1990s Rybolovlev, now 46, developed Uralkali into the largest potash producer in the country in the Siberian region of Perm. In 1996, he was held in jail for 11 months on the suspicion he was involved in the murder of another businessman, although he was ultimately acquitted for lack of evidence. He acquired a $100-million estate in Palm Beach, Florida from American real estate tycoon Donald Trump in 2008. In 2011, Rybolovlev, a sports fan, bought the AS Monaco football club. He owns a $110-million yacht, and his exquisite art collection includes paintings by Modigliani, Van Gogh and Picasso.

But tax fugitives aren't the only ones drawn to the island. "A classic route for laundering illegal Russian funds first passes through offshore companies, in the Caribbean, for example, and then through accounts in Cyprus," says Mark Pieth, a Swiss criminal law expert and chairman of the Organization for Economic Cooperation and Development (OECD) Working Group on Bribery. He cites as an example the scandal surrounding Russian attorney Sergei Magnitsky, who in 2009 was tortured to death in a Moscow prison at the age of 37, apparently because he had uncovered a large-scale corruption case that the government was trying to suppress.

Russian government officials allegedly embezzled $230 million in conjunction with the affair, with some $30 million reportedly being sent abroad through Cypriot banks. Magnitsky's former employer, financial investor Bill Browder, who has spent years painstakingly investigating the murder and its background with a team of half a dozen employees, is convinced that the allegations are true. His conclusions prompted Switzerland to freeze bank accounts, and the United States to recently bar entry to Russian officials involved in the case, triggering sharp protests from the government of President Vladimir Putin. After charges were brought in July 2012, the Cypriot officials responsible for combating money laundering didn't respond for months, says Browder.

Cypriot investigators reject the accusations, saying that the country's attorney general initiated proceedings in the fall, and that they are still underway. But they also note that the investigation is complex.

In last fall's report, however, the BND concluded that Cyprus is indeed a "gateway for money laundering activities in the EU." The Germans pointed out that it is "relatively easy" to open accounts anonymously in Cyprus, and that auditing requirements are inadequate. According to the BND report, attorneys and trustees in Cyprus have specialized in financial services, some of which "are used to conceal money earned illegally." Ironically, the BND reached some its conclusions on the strength of information supplied by Russian authorities.

German investigators also complain about enormous hurdles when it comes to legal assistance. "They place such high demands on the inquiries and want to know so much that we might as well put all of our information on the table right away," says Sebastian Fiedler, a money-laundering expert with the Federation of German Police Officers.

Cyprus has only a one-percent share of the global market for international financial service exports. Nevertheless, it's in the top third of countries listed on the Financial Secrecy Index, a sort of international ranking of tax and money-laundering havens. According to Swiss money-laundering expert Pieth, "the scrutiny and bank regulation is very poor there. Many requirements are complied with formally, but it's a different story in practice."

The Cypriot government, on the other hand, stresses that upon joining the European Union in 2004, the country adopted all regulations and laws to fight money laundering, as well as creating new government agencies. Independent auditing institutes and international organizations have given Cyprus their seals of approval again and again, and the parliament has also approved the measures called for by the "troika," made up of the European Commission, the European Central Bank (ECB) and the International Monetary Fund (IMF).

But Cyprus must also implement the many rules and be prepared to bear the consequences -- that's the key. "If Cyprus regularly sanctions money laundering, the entire country's business model as a fiscally attractive location for holding companies will be called into question," says a tax expert with a large Frankfurt law firm.

For this reason, European politicians involved in the bailout talks are determined to put more pressure on the government in Nicosia. According to internal documents prepared for euro zone finance ministers, many foreign investors in Cyprus disguise their identity, and about a third of investors are unknown to the Cypriot authorities. The European politicians are also troubled by the fact that Cyprus seeks to attract investors with excessively low tax rates. Currently companies on the island are only subject to a 10-percent corporate income tax.

European Central Bank policymaker Jörg Asmussen is now calling for further concessions from the Cypriot government. "The current memorandum is a draft; there has been no political approval from the Euro Group yet," says Asmussen. To achieve it, he adds, a key section of the declaration would have to be improved. "My impression is that improved transparency of the financial sector will be critical to obtaining approval of the program in the partner countries." In other words, Asmussen is saying, Cyprus should fight money laundering more resolutely, but it should also raise its corporate tax rates.

Otherwise there might not be an aid program at all, German government representatives are indicating, and they're resorting to the cynical jargon of international bailouts to send their message. There are limits, they note, to how "system-relevant" Cyprus is. 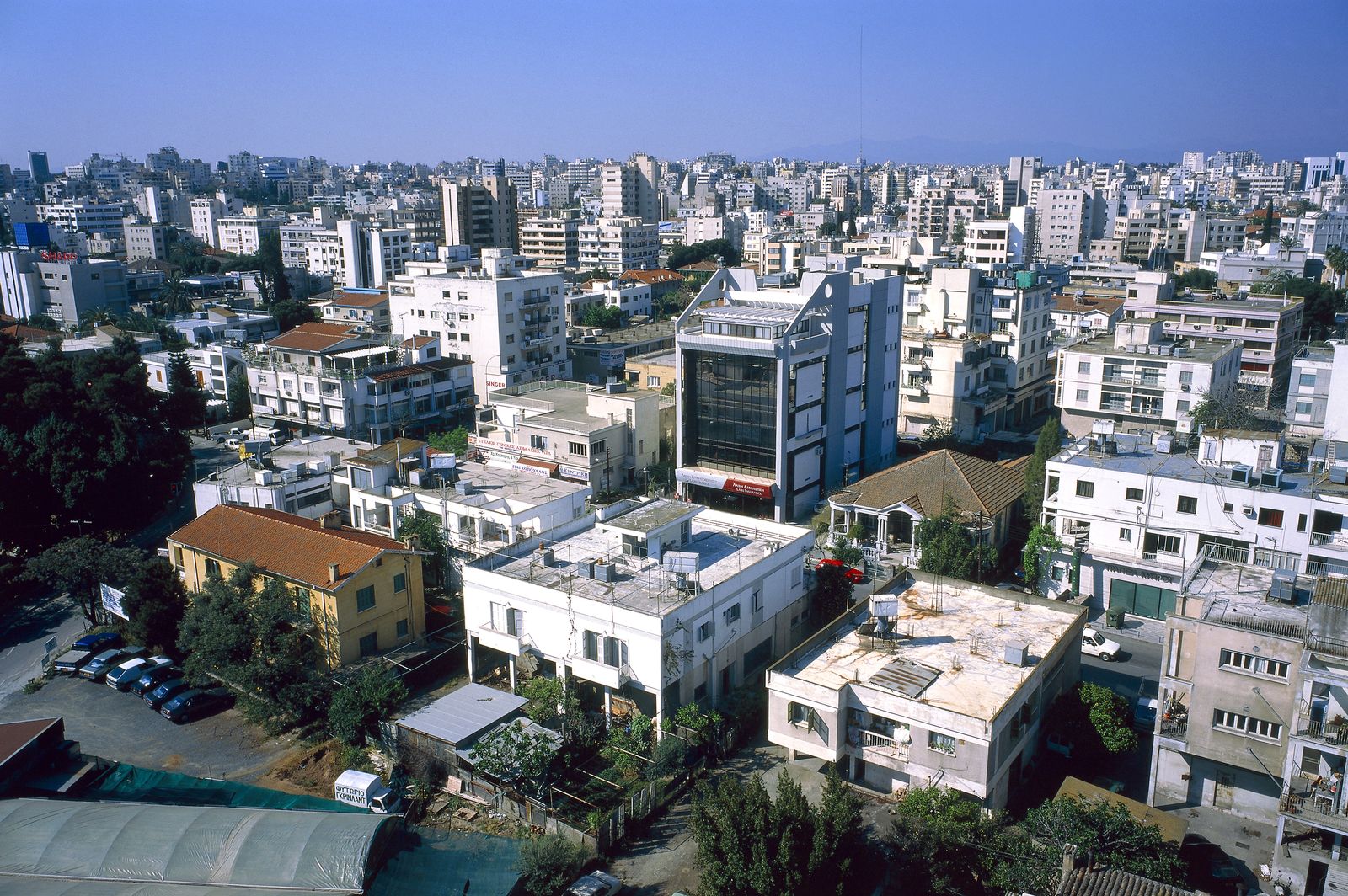 Nicosia, the capital of Cyprus.