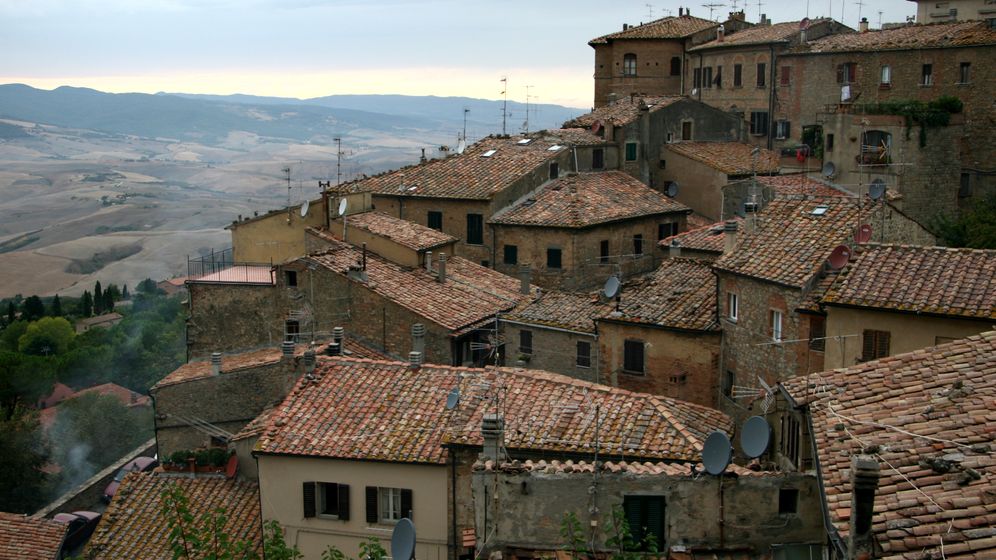 Photo Gallery: The Pilgrimage of 'Twilight' Fans to Volterra

Marco Buselli stands on the steps leading up to the top of Volterra's bell tower. From that perch, he can see the fog-wreathed hills surrounding the city, the ancient Etruscan city wall and, closer still, a tangle of alleyways.

At 35, Buselli is young to be a mayor. Yet sometimes he has a hankering to experience his town as it was in the Middle Ages -- when barely any strangers visited it. Back then, the town seemed almost unreachable, buried among the hills and hidden away from the rest of the world.

Buselli likes to ascend the tower above the central square. It is part of the Palazzo dei Priori, which houses his office. Here, he finds the peace and quiet he needs to contemplate how his town can connect to the rest of the world but still remain true to itself.

Like the mayors of many other Italian cities, Buselli is worried about selling out to commercial interests. He doesn't want trinket shops like the ones in Venice, nor does he want a face-lift like the one that the medieval Tuscan town of San Gimignano has had.

He wants Volterra to remain authentic, a real town rather than a scenic backdrop.

And Buselli's concerns are justified: For about a year now, vampire fans from around the world have been overrunning Volterra. The reason behind this flood of visitors is American author Stephenie Meyer and the best-selling books in her Twilight saga, which have already sold over 100 million copies worldwide. Volterra happens to be the ancient city inhabited by the elite of Meyer's fictional vampire.

On the piazza down below stands a tour guide surrounded by teenagers. Dika Boelen has lived in Volterra for 25 years. The 59-year-old Dutchwoman used to guide around left-wing teachers from Germany who stayed on farms instead of hotels, read Communist poet Pier Paolo Pasolini and raved about eco-friendly wine-making.

These days, though, Boelen has to answer questions on issues such as why vampire skin is so pale. Most of her new clients are 15-year-old girls from Europe and beyond, who are chaperoned by their parents. Since Volterra has no train station, they come from nearby Florence or Siena by bus and carve "Edward Forever!" into the walls while laughing giddily.

They are referring, of course, to Edward Cullen, the dashing vampire hero of the Twilight books -- played in the films by British heartthrob Robert Pattinson -- who has set hearts racing all over the world, from Indonesia and South Korea to Russia, Norway and Thailand.

As Boulen explains to her clients, Meyer had never visited Volterra in person before writing the book. While writing "New Moon," the second tome in the series, Meyer needed to find a hometown for a clan of vampires called the Volturi. When she read about Volterra online and noticed that the names were quite similar, she decided to make it their hometown. It could have just as easily been another historic city, such as Viterbo or Vicenza, Boulen adds.

In that book, the vampire Edward believes that Bella, his girlfriend and the heroine of the series, has died. He goes to Volterra to die by angering the Volturi at high noon and inciting them to kill him.

Buselli admits that the town bungled its first interactions with this new world of vampire fandom. At the time, there were many locals complaining about the city becoming a Disneyland -- as well as the more pizzerias and camping grounds that might result. "We fought over it for months," Buselli says. As the people from Volterra see it, Montepulciano, another medieval hill town, was smarter; it threw itself at the company making the movies and eventually convinced it to make Montepulciano the backdrop for scenes from the movie "New Moon" instead of Volterra.

Still, together with a hastily organized committee, Buselli and other locals came up with a cunning plan that would allow them to share in the Twilight hype without spoiling their town. Tour guides in the city scouted out gates that Bella could walk through and alleyways where dramatic events between the couple could take place.

These days, on Fridays and Sundays, the guides offer a "New Moon" tour, which includes a bloody finale in a jail, with its own prize-winning troupe of inmate actors. As Boelen explains: "Our visitors want vampires, but we give them Volterra. That's our trick. We show them our Roman amphitheater, the Etruscan graves and the Renaissance palace -- and maybe something out of all of that will stay with them."

The tours have been sold out for months and, in 2009, the town's lodgings enjoyed 50,000 extra overnight stays. "Thanks to Twilight, we have not felt the effects of the financial crisis," Buselli says. And the town is expecting the next attack of vampire vans in July, when the third Twilight movie will hit theaters.

A Popular Message of Abstinance

After sunset, Boelen leads visitors down into a dungeon, which is actually an Irish pub named "Quo Vadis." There, prisoners belonging to the theater group wear hoods while serving red wine they call "blood cocktails." Australian students squeal while a German mother looks down her nose at them and her daughters smile widely. Two 17-year-old friends from the northwestern city of Trieste speak of having read the book a dozen times and how, to them, it is more meaningful than the Bible.

As they see it, the author's message to girls around the world is: Don't give yourself to the first guy to come along; wait for Mr. Right. "If we had read the book earlier," one of them earnestly says, "we might have spared ourselves some trouble with boys." Indeed, whether they are Christian, Muslim or Buddhist, Meyer is making sexual abstinence attractive for young women in many cultures.

Boelen herself finds the Twilight fans terrifyingly virtuous and the novels overly mushy -- a poor imitation of Romeo and Juliet written by a Mormon opposed to sex before marriage. "Every generation fights against their parents' ideals," Boelen says. "That's just the way it is."

At the end of her tour, Boelen guides the group of girls to a piazza near the city gates. Here, she urges them to take in the atmosphere and get a real sense of the essence of this historical town. "Vampires don't have souls," Boelen points out. "But Volterra does."