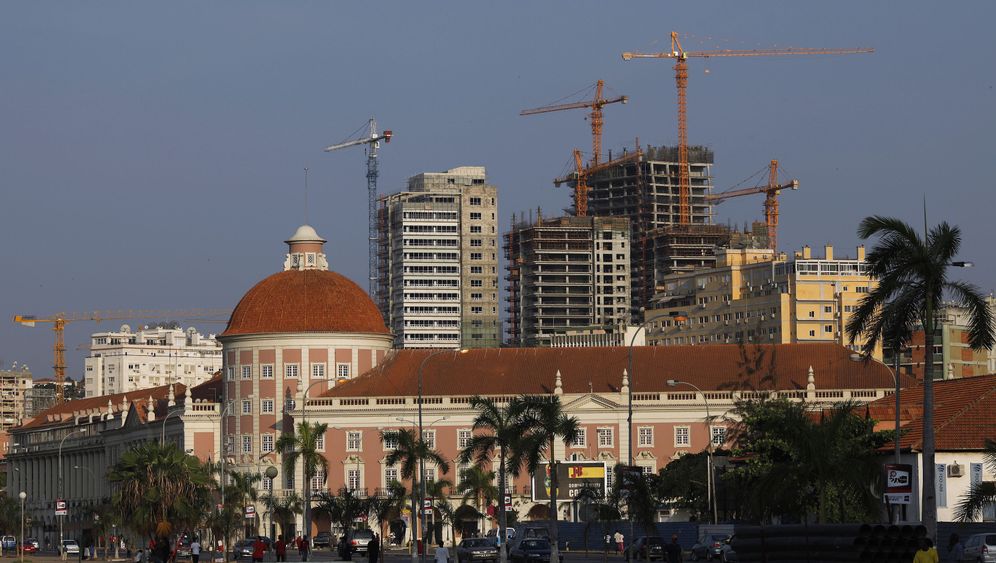 He decides to emigrate.

That's why António Sàágua, 45, a soon-to-be economic migrant, is sitting in the stark gray office of Ema Partners International on a sunny spring afternoon. The employment agency, located on a quiet side street off of Lisbon's grand Avenida da Libertade, places skilled personnel and managerial staff. Sàágua is dressed as if he were going for a job interview, in a suit, a starched shirt, gold cufflinks and polished shoes.

The applicant has a lot to show for himself, including a degree in ergonomics and a doctorate in marketing management. He teaches at a leading business school in the Portuguese capital. He also has 20 years of experience as a team leader in the healthcare industry. "I was a pioneer in organizing work processes for my clients in ways that made more sense while saving costs at the same time," he says with a thin smile. But despite his qualifications, he is earning less than €1,000 a month in his current job, which involves reorganizing a hospital near Lisbon. It means that he can no longer afford to send his children to a private school and keep the family's centrally located apartment, which has a view looking out over blossoming trees.

Jorge Fonseca, 42, slaps Sàágua on the back and greets him as "amigo." On this day, he will train his "friend" in one of the agency's secluded offices for his upcoming job interviews. Fonseca, wearing gold-rimmed glasses and looking overdressed in a dark blue suit, approaches all of his clients with the same cheery demeanor. He is their "career coach," which includes digging up about 1,000 potential employers from the company's database for each of his clients and fine-tuning their application documents. An economist with contacts around the world, Fonseca dashes back and forth between the laptop on his desk and the conference room, printing out lists of contacts and abbreviated versions of the leading career advice books published abroad. He is obsessed with the details as he prepares Portuguese executives for a new professional future.

For most of them, that future will be far away from home, and increasingly in Angola, Portugal's former colony in southwestern Africa. More than 10 percent of the clients busy headhunter Fonseca has successfully placed in the last year have gone to Angola. Sàágua, too, can imagine a future for himself as a healthcare executive in Angola. In the pharmaceutical industry, for example, he is receiving offers with monthly salaries of €8,000-10,000.

A Reversal of Roles

The roles have been thoroughly reversed between the once-proud motherland on Europe's far western edge and the former colony, which was named by seafarers from the Portuguese empire. After the Portuguese dictatorship was overthrown in the 1974 Carnation Revolution, and after Angola's independence a year later, hundreds of thousands of Portuguese and Angolans returned home to Europe when the liberation movements, armed by the superpowers, embarked on a bloody civil war to gain control of the country.

But Portugal remained one of the continent's poorest countries. Finally, last year, it had become so entangled in the debt crisis that it had to take advantage of the bailout fund established by the European Union and the International Monetary Fund (IMF). The tough austerity measures they imposed are costing more and more people their jobs. The Portuguese government on Wednesday reported that the jobless rate in the country had jumped to 14.9 percent during the first quarter, up from 12.4 percent during the same period last year. It is well-educated people like healthcare manager Sàágua, in particular, who can no longer find suitable work. Just as their ancestors suppressed the indigenous people in their colonies in Africa and Asia, the Portuguese, with few prospects for growth, now feel subjugated by the dictates of the northern European countries.

Since a peace agreement was signed 10 years ago, Angola has developed into a major African oil producer. In the first quarter of this year, the country produced 1.8 million barrels a day at offshore wells at depths of up to 1,500 meters (4,920 feet). Angola is China's second-largest supplier of the black gold. Its economic growth rates are the envy of the entire continent, partly because it also has rich diamond deposits and fertile soil. Angola was once the world's third-largest coffee exporter, but because the fields were mined during the war and the plantations were destroyed, the country must now import 90 percent of its food.

With the help of the state oil company Sonangol's petrodollars, the former enslaved nation is going on a shopping spree in Portugal. The Angolan elites, many with ties to President José Eduardo dos Santos, in power for the last 32 years, are buying up Portuguese government-owned companies that have to be privatized quickly. Portugal's conservative prime minister, Pedro Passos Coelho, spent his childhood in Angola, where his father was a doctor. This connection has prompted Coelho to advocate closer relations between the two countries, "their citizens and their companies." Now Angolans are buying up shares in Portuguese media companies and they are purchasing prime property along the Atlantic beaches as well as luxury real estate in Lisbon and designer clothing. They are also snapping up workers. Close to 150,000 Portuguese have already obtained visas for Angola.

"For every shipwreck in Portugal, there is a lifebuoy in Angola. Here a professional desert, there an oasis," raves the Lisbon weekly magazine Visão. Since the end of the four-decades-long war, Angola has seen frenetic rebuilding. Roads, railways, airports, housing, schools and hospitals need to be built. But the country also needs help organizing its electricity and water supply, developing Internet access and revamping the agricultural sector.

For all of these reasons, headhunter Fonseca sees a new El Dorado for skilled professionals and managers taking shape in the Angolan capital Luanda, which is only a seven-hour flight from Lisbon.

Some 40 percent of the 18 million Angolans are illiterate. Those without education and training are unable to find work, and two-thirds of the population survives on less than €1 a day. Only a small upper class has university degrees, and an even smaller minority has obtained a coveted foreign degree. This -- and the fact that they face no language barriers in an African country where Portuguese is the national language -- explains why teachers, doctors, engineers and agricultural experts from Portugal are in such great demand. Companies draw up the employment contracts for Angola under Portuguese law, and the workers from the motherland are sent to Africa as expatriates.

"I can't stand it any more, the constant talk about the crisis here in Portugal," says Marta Gonzaga, 39, standing on the terrace of the chic Bairro Alto Hotel in Lisbon. She gazes through large, round sunglasses at her neighborhood near Camões Square, above the Tagus River. "For many of my fellow Portuguese, things are constantly going downhill." Gonzaga, a single mother with a 12-year-old daughter, loves this part of Old Lisbon, with its tourist magnet, the Café A Brasileira, and she would like to continue living here. But she is heeding the call to Angola because of work. For Gonzaga, the African country offers a "bright outlook."

At the end of May, Gonzaga will help organize a TEDx event in Luanda. TED stands for "Technology, Entertainment, Design." She had already organized the events, where scientists, entertainers and other creative individuals come together and, in short presentations, broadcast their ideas about the future to the rest of the world, at home in Portugal. A photographer and advertising professional, Gonzaga sees the assignment in Angola as a "lucky coincidence."

She was born in Luanda in 1972. Her parents and both sets of grandparents lived in the African colonies, working as teachers and government officials. Gonzaga's mother was a journalist. After the Carnation Revolution, when she spoke with Angolan rebels who had been fighting for their independence since the beginning of the 1960s, it became clear to her that the whites would have to leave the country. The family, together with two small children, returned to the metrópole, as mainland Portugal had been called, like most of the 350,000 Portuguese living in Angola at the time.

Her mother could never get used to the close quarters in her home country. Although Portugal had been liberated from more than 50 years of dictatorship, "you could feel the dramatic burden of unhappiness, fate and the gray past, and you still feel it today," says the event manager, clad entirely in black, glancing at her bright-red fingernails. A manicure costs €6 in Lisbon, she says, and more than €45 in Luanda. Here in Portugal, she has to work five times as much for the same pay as in Angola. Gonzaga wants to go to Angola to work as a public relations consultant for large companies. The market is good, she says, and Gonzaga already has attractive offers.

Finding the 'Portuguese Dream' in Angola

A few months ago, when Gonzaga returned to Luanda for the first time since she was three, she had no trouble getting used to the place. "Everything is completely different now," she says -- the construction in downtown Luanda, the expensive restaurants with ocean views, the chaotic traffic in the streets and the newly built beltway around the city -- "and yet it's also very familiar." The scent of the flame trees immediately took her back to her earliest childhood days.

Gonzaga, once a retornada in Portugal, and now a returnee to Angola, sees the former colony as a "Portuguese dream." At the same time, she is also aware of how difficult life is for most of the local inhabitants, and she understands why so many Angolans with no education are hostile to the Portuguese. They sell everything under the sun -- fruit, cars, even drugs -- from roadside stands, and they envy the foreigners for their well-paid jobs. Friends have warned Gonzaga about the robberies committed by young men on rattling motorcycles.

The high crime rate and rampant corruption discourage most Portuguese economic migrants from bringing their families with them to Africa. Gonzaga also plans to spend no more than 10 days a month in Luanda, and she says that her new place of work is too dangerous for her teenage daughter.

Because the authoritarian regime of President dos Santos has no respect for freedom of opinion and freedom of the press, victims of attacks are at the mercy of unpredictable Angolan civil servants. Foreigners who file complaints or express criticism worry about losing their visas. For them, the most important thing is to survive in this place, so far away from home, where they are completely on their own.

Foreigners usually live in closed communities with their own security service. Many go to work in armored cars and with bodyguards. Luanda is also one of the most expensive cities in the world, with rents in good neighborhoods running upwards of $15,000 a month. The slots at international schools are expensive and rarely become available. A cup of yogurt costs the equivalent of €4 in a supermarket, while a simple dinner in a restaurant costs about €100 a person. This is why large companies pay for their employees' food and lodging.

Most Portuguese want to save as much of their salary in Angola as possible. This is also the goal António Sàágua, the healthcare industry manager, has set for himself if he can find a suitable offer. He and his wife have carefully ironed out his negotiating strategy. They've agreed that he will move alone to the former colony and live there for three to five years, and he expects to spend lonely evenings "holed up at home with books and Skype." His one condition is a free flight home once every six weeks.