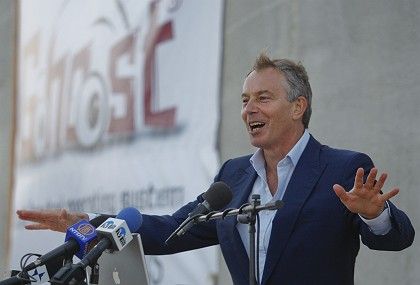 London's bid to promote Tony Blair as a candidate to become the first ever President of the European Union is being met with unexpectedly vocal opposition in a number of European capital cities.

The person serving as EU president will effectively be the international face of the 27 member countries and would lead regular summits of state and government leaders. The creation of the post is contingent on the ratification of the EU's Lisbon Treaty, the watered-down successor document to the failed European constitution. Rejected by Irish voters last year, the issue is expected to be put up for another vote in a second referendum on Oct. 2.

The office of the EU president will replace the current tradition of the rotating presidency, which sees a different member state taking over summit organizing responsibilities every six months. The presidency as it stands today gives each EU member state a chance to shine in the spotlight, and some aren't pleased at the idea that a master of self-promotion like Blair might steal that limelight for himself.

"Small and medium-sized countries are less interested in having a strong leader," says Swedish Prime Minister Fredrik Reinfeldt, whose country took the helm as president in June.

Left-leaning leaders in some European countries dislike Blair for the allegiance he showed to the US during the Iraq war. And pro-European conservatives and business-friendly parties oppose the idea of having a top EU representive from a country that refuses to introduce the euro or join the Schengen agreement on border-free travel within Europe.

Leaders of the EU's most powerful players -- France's Nicolas Sarkozy and Germany's Angela Merkel -- once promised Blair the job because he managed to prevent a difficult British referendum on the Lisbon Treaty. But insiders in Paris and Berlin warn that enthusiasm for Blair as president has since waned.

At least one name is already circulating as a possible alternative to Blair. In Spain, Prime Minister José Luis Rodrígues Zapatero is pushing for Felipe González, an earlier prime minister, to be appointed EU president.