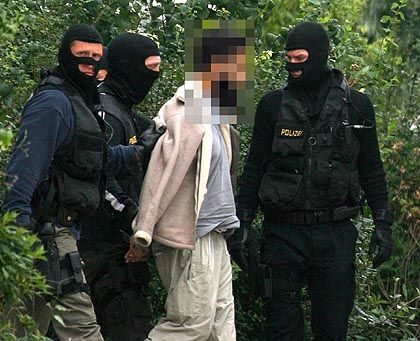 It's been three weeks since the Global Islamic Media Front (GIMF) put out an ad for a translator to help with the growing workload in terror news. "Brothers and sisters with English language skills are especially sought," wrote a GIMF member. "We're looking for someone with time to sacrifice for Allah and thereby support the jihad." Instructions were to send an e-mail response, after which one would receive "a little job" in return.

"Jihad by Telecommute" could have been GIMF's business slogan. For almost two years it operated a pair of Internet sites in German, one of which used a discussion forum to publicize acts of terror committed by bin Laden & Co. No one else in the German-speaking world was more effective at this task.

At least until Wednesday, when Austrian police took three people into custody believed to be connected with the site -- including two men, 26 and 21, and a 21-year-old woman. They are accused of having been involved in the production of a video published on the GIMF homepage on March 11 that showed a disguised Arabic-speaking spokesperson threatening attacks in Germany and Austria if those countries did not withdraw their soldiers from Afghanistan.

One line from a video asking the question, "Is it not dumb to embolden the mujahedeen to carry out attacks in your country?" proved particularly worrisome to the authorities.

Austria has no troops in Iraq and only four officers serving in Afghanistan.

Police did not elaborate on details of the arrests, though they did say that a fourth person was arrested but later released due to a lack of evidence.

Not much is yet known about the three persons arrested. The woman and one of the men are married to each other. All three are Muslims and Austrian citizens, though not converts, and all were unemployed. They are second-generation immigrants from the Arab world, according to Austrian Interior Minister Günther Platter, who spoke at a hastily convened press conference on Wednesday evening.

According to information obtained by SPIEGEL ONLINE, one of those arrested is the presumed head of the German-language GIMF, founded in fall 2005. Its model was the international GIMF, which came into being sometime around 2002 -- originally only in Arabic -- in order to redistribute al-Qaida material on the Internet.

An English-language branch was then founded, whose Web site presumably inspired the alleged head of the German GIMF to open up another franchise. Among the things that points to some cooperation between the sites is that the German-language site started off as a blog set up on a free service provider just as the English-language version was. The two sites had links to each other.

One of the men, whose identity is known to SPIEGEL ONLINE, was very active on Arabic-language jihad Web sites. In the name of GIMF, for example, he posted offers in an Islamic discussion forum used by almost all terror organizations to publish claims of responsibility for terrorist acts.

Austrian authorities revealed on Thursday their belief that the suspects arrested were in direct contact with al-Qaida over the Internet. According to Erik Buxbaum, Austria's general manager for public security, Austrian terror specialists followed events 'live' while the groups communicated. E-mail traffic was observed, and the group of young Muslims was kept under observation as part of a "large bugging operation" code-named "Target."

According to information obtained by SPIEGEL ONLINE, contact between the group and al-Qaida was most likely made in jihadist Internet forums.

German terror investigators had been keeping a close eye on the German-language GIMF Web site, which appeared in fall 2005. "You can follow radicalization in real-time here," said a concerned official a few months ago, referring to the Web site. There was serious discussion on the GIMF discussion forum about issues such as whether Muslims who have strayed from their faith must be killed, and photographs of the corpses of US soldiers were shown.

Both Web sites run by the German GIMF have been down for a few weeks, but that has nothing to do with investigations that have been underway in recent months. Instead, there has been a general blackout among many of the jihad Web sites brought about by a campaign of al-Qaida opponents in the US, who sent e-mails of protest en masse to the Internet providers and hosts of these sites.

In the meantime, it has been reported that the arrested have admitted to having had contact with al-Qaida. Their apparent claim, however, to not have built a terrorist cell corresponds with the information held by German authorities, who have not assumed that the German GIMF was planning a terror attack in the real world.

The SITE Intelligence Group, which monitors al-Qaida activity on the Internet, stated Thursday that the leader of the Vienna-based GIMF may have had links to the Army of Islam, the group that kidnapped BBC journalist Alan Johnston earlier this year.

After having the three under observation over a period of months, Austrian police and a special forces unit called "Cobra" carried out the arrests. Officials claim that they worried that the suspects might flee abroad and perhaps erase computer hard-drives. Documents and computers seized during the raid will most likely provide information about who numbered among the GIMF's supporters.

Although no weapons or bombs were found, the head of the group is believed to have tried to obtain bomb-making materials. In addition, the Austria broadcaster ORF has reported that the 26-year-old leader attended a terrorist training camp, although German intelligence officials are skeptical of this claim.

The threatening video from March 11 was uniquely worrying enough to bring about an emergency indictment, according to officials in Vienna. Unlike the group's other terrorist propaganda, which was merely distributed, the group is thought to have been directly involved with producing the March 11 video. On the same day that the video was made available online, an anonymous source alleging to be part of GIMF told SPIEGEL ONLINE in an e-mail message: "Yes, this message was from the GIMF, but not just from its German division."

It was as a result of one slip-up that investigators were put on the apparently right trail. In his speech in Arabic, the speaker in the video spoke angrily and at length about domestic politics in Austria. He accused the government of having broken its promise by introducing student fees -- a clear indication of the speaker's everyday concerns.

Like its English- and Arabic-language forerunners, the German-language GIMF is part of a phenomenon that originated right after 9/11 and the war in Afghanistan began: al-Qaida sympathizers began to affiliate themselves with members of the network. No longer were they merely observers; now, they could -- when they wanted to -- be global players on the field of cyber-jihadism, who could use their threats to scare the world into a state of fear and anxiety without having to go to Afghanistan or build bombs. "If the Americans think that they can treat and rule over the Internet as if it were their own property, we turn the spell back on the magician," proclaimed the international GIMF leadership in fall 2005 in a communication obtained by SPIEGEL ONLINE.

A New Type of Activist

In the meantime, these activists for al-Qaida & Co. have become just as important as the terrorists themselves due to the success they have had in radicalizing others with their Internet offerings. The GIMF has an aggregating function with the terrorist material in that they "re-format and alter (it) to make it more attractive," writes the Norwegian terror expert Brynjar Lia in a recent edition of the security and intelligence magazine Jane's.

Despite this cooperative effort, the GIMF organization would seem to be proud of its independence from al-Qaida. Last year, it declared: "The GIMF is an Islamic media source on the Internet. It is an ambassador for the mujahedeen (SP)The GIMF belongs to no one. It is the property of all Muslims." Nor has the German-language GIMF ever represented itself as being part of al-Qaida.

It is reasonable to believe that the GIMF activists did not expect to be arrested. After their Web sites went down last August for a short period, they wrote: "We were there and we will also remain."

To some extent, this might be true because it is almost certain that the three people arrested were not the only people involved in the project. It should become apparent in the days to come whether those who were not arrested plan to take the reigns of the organization.

The arrests take place in Austria in a climate of anxiety about integration and terrorism fuelled by successful and frustrated terror attacks throughout Europe and most recently in Germany, where three men were arrested for allegedly obtaining the materials necessary to bomb various targets related to US military forces stationed there.

For their part, Austrians are worried about whether or not they can successfully integrate the 400,000 Muslims residing in the country. Ariel Muzicant, the head of Vienna's Jewish community, warned on Wednesday that the number of al-Qaida sympathizers in Austria has seen "massive growth" in recent months. A planned mosque in the state of Carinthia may be blocked if far-right politician Jörg Haider, the state's governor, is successful in his attempt to get the permits revoked by changing building laws, claiming that the mosque would disturb the "image of the place" and that "Western culture must be protected."

With reporting by Marion Kraske in Vienna.