When two airliners slammed into the World Trade Center in New York and a third into the Pentagon in Washington on the morning of Sept. 11, 2001, Khalid Sheikh Mohammed and Ramzi Binalshibh were traveling in Karachi. When Binalshibh and the sheikh reached an al-Qaida safe house a short time later, they switched on the television set. It was an hour of triumph for the two chief planners of the attacks on America.

The sheikh later told an al-Qaida confidant that attacks using aircraft had been a dream of his -- his life's work, in fact. One day, he said, he would repeat the attack on the White House, which may have been the target of the fourth plane on 9/11, which crashed in rural Pennsylvania. As Binalshibh later related when he was in US detention, when Sheikh Mohammed, Binalshibh, Mustafa Ahmed al-Hawsawi, the financier of the attacks, and a nephew of the sheikh watched the images from America on their television screen, they toasted each other and thanked Allah for the success of their operation.

The detailed accounts are part of the secret US government files on Guantanamo to which SPIEGEL has gained access and that are now being published by WikiLeaks. The documents also include reports on high-level al-Qaida officials, like Khalid Sheikh Mohammed and Ramzi Binalshibh, whom the CIA interrogated for years in secret prisons before they were transferred to Guantanamo in 2006.

The summaries of the interrogations reveal the level of enthusiasm with which al-Qaida's chief planner, Sheikh Mohammed, continued to pursue similar plans after 9/11, most notably an attack on Britain's Heathrow Airport. Nine months after the attacks, in early June 2002, Sheikh Mohammed told Binalshibh about the Heathrow scenario, which was apparently well developed at that point. The idea, the sheikh explained, was to hijack an airliner as it was taking off from Heathrow, turn it around and crash it into the airport.

The sheikh wanted to know what Binalshibh thought of the idea.

The operation would be easier, Binalshibh replied, if al-Qaida operatives could infiltrate the airport personnel, which would allow them to obtain internal information. In addition, he said, they would also need at least one team to hijack the aircraft.

The sheikh later told his interrogators that two cells had already been formed to carry out the plan. The members of one group, he said, resided in Great Britain and had been given orders to complete pilot training in Kenya, so that they could fly the aircraft once it was hijacked. A second group was stationed in Saudi Arabia and, as was also the case with the 9/11 attacks, its mission was to search for potential martyrs to participate in the strikes. According to Binalshibh, Sheikh Mohammed was eager to execute the plan.

The statements made by the Guantanamo prisoners should be taken with a grain of salt, because they were obtained through torture, at least in part. For example, the CIA overcame Sheikh Mohammed's resistance by repeatedly using the method known as "waterboarding," in which the prisoner is strapped to a board and water is continually poured onto his face until the person thinks he is going to drown.

There are many indications that Sheikh Mohammed, the architect of the 9/11 attacks, was held and tortured in a location near Szymany Airport in Poland. For several months, the 9/11 coordinator was given psychotropic drugs. Other previously published Guantanamo documents relating to Binalshibh contain page after page of blacked-out text, evidence of the US's determination not to reveal which drugs Binalshibh was given.

Nevertheless, the Heathrow plans must apparently be taken seriously. Statements by other detainees, including Walid Muhammad bin Attash, confirm that the Heathrow scenario was the subject of intense discussion within al-Qaida. Bin Attash told the CIA that not only was he in the loop when it came to preparing the plan, but that he had in fact proposed it in the first place. Sheikh Mohammed was seen as a proud but extremely cooperative prisoner, even dictating actions and plans to his interrogators that they had been unaware of until then. The prisoner, to whom the Americans referred simply as KSM, repeatedly emphasized that he had no greater desire than to be sentenced by the Americans and die a martyr's death as soon as possible.

Al-Qaida leader Osama bin Laden had installed Khalid Sheikh Mohammed, 46, as the terrorist organization's chief of operations. Sheikh Mohammed was the man who chose al-Qaida's targets, and who distributed the money and his blessing, which, from the Americans' perspective, made him just as dangerous as bin Laden himself. His arrest in March 2003 by Pakistan's ISI intelligence service is considered one of the greatest successes in the fight against Islamist terrorism. The Pakistanis promptly turned the prisoner over to the CIA.

Hatred of All Things American and Even More Terror Plans

Broken by waterboarding and the special interrogation techniques authorized by the administration of former US President George W. Bush, Sheikh Mohammed told the Americans about various terrorist projects, each having the goal of killing as many infidels as possible. For instance, he said, he had instructed Jafar al-Tayar, a US citizen and al-Qaida member, to explore the Panama Canal for a plan that involved blowing up one or two ships loaded with explosives. Al-Tayar also had more general orders to scout out possible targets in the United States.

The sheikh seemed obsessed with the idea of turning aircraft into weapons of terror. The "Detainee Assessment" of Sheikh Mohammed contains a list of planned attacks several pages long. Apparently al-Qaida's chief planner painstakingly told his interrogators about all the plans he had made. He also quibbled with them over the details. In one case, for example, he insisted that he had only had half of the responsibility for the planning efforts. At some point, he also no longer ruled out the use of nuclear weapons, saying that he had intended to unleash "a nuclear hell storm."

It appears that Sheikh Mohammed never got over the fact that he had failed to successfully strike the White House in Washington, and that he had wanted to make up for the loss by including such an attack in future plans. The so-called "second wave," which would have involved attacks on multiple targets in the United States, also remained one of his projects. Aircraft became something of an obsession for Sheikh Mohammed. In late 2001, he told interrogators, he had issued the order to attack the "tallest building in California" with a hijacked aircraft. The hijackers were to gain access to the cockpit with at least two bombs hidden in the soles of their shoes. This too is revealed in the documents.

Another plan involved using an aircraft to attack a Western warship in the port of Dubai. To this end, the terrorists were to hijack an aircraft at the Dubai airport, fill it with explosives and then fly it toward the harbor. According to the statements of 14 "high-value" prisoners, the plan involved a Yemeni al-Qaida leader providing the explosives, which were to be brought overland to Dubai from Yemen. One of the places the terrorists planned to hide the explosives was under piles of fish. Some of the al-Qaida plans read like wild and sometimes rather naïve cock-and-bull stories.

According to the sheikh, in April 2002 he had instructed al-Qaida operative Lyman Faris to develop a basic assessment of the possibility of infiltrating the cargo areas of airports. The sheikh said that he had planned to crash several cargo planes into various aircraft buildings in the United States, and that Faris had also wanted to destroy the Brooklyn Bridge in New York.

A Deadly Dispute over a US hostage

Another idea, which was on the verge of being implemented but was discovered after a raid in Karachi, was relatively straightforward. In September 2002, Pakistani and American security forces found doctored SEGA video games that had been filled with explosives and were to be detonated remotely, using mobile telephones and other devices.

In addition to being al-Qaida's chief planner, Sheikh Mohammed also acted as a mobile banker of sorts who was involved in the funding for various operations. He told US interrogators that he had paid Hambali, a major Indonesian terrorist for many years, $130,000 (€89,000) -- $100,000 as a reward for the successful attack on the island of Bali in October 2002 and another $30,000 for future attacks.

Sheikh Mohammed claimed that in early 2002, when security forces were ramping up the pressure in Pakistan, he gave an associate named Saifullah Paracha between $500,000 and $600,000 for safekeeping. Six months earlier, Paracha had been instructed to investigate safe forms of investment. Sheikh Mohammed was known to hand over such large sums in the form of bills wrapped in newspaper or cellophane.

Another episode from the Guantanamo files, which relates to the death of Wall Street Journal reporter Daniel Pearl, shows how deeply Sheikh Mohammed hated all things American. According to statements made by an al-Qaida member, there was a dispute in 2002 between Sheikh Mohammed and the senior al-Qaida member Saif al-Adel.

Pearl had been lured into a trap in Pakistan and was kidnapped during a supposed interview. His kidnapper turned him over to Sheikh Mohammed, who was the head of terrorist operations in Karachi at the time. It would not be very wise to kill Pearl, Al-Adel said, and advised Sheikh Mohammed to either free the journalist or return him to his original kidnappers. Sheikh Mohammed disagreed. 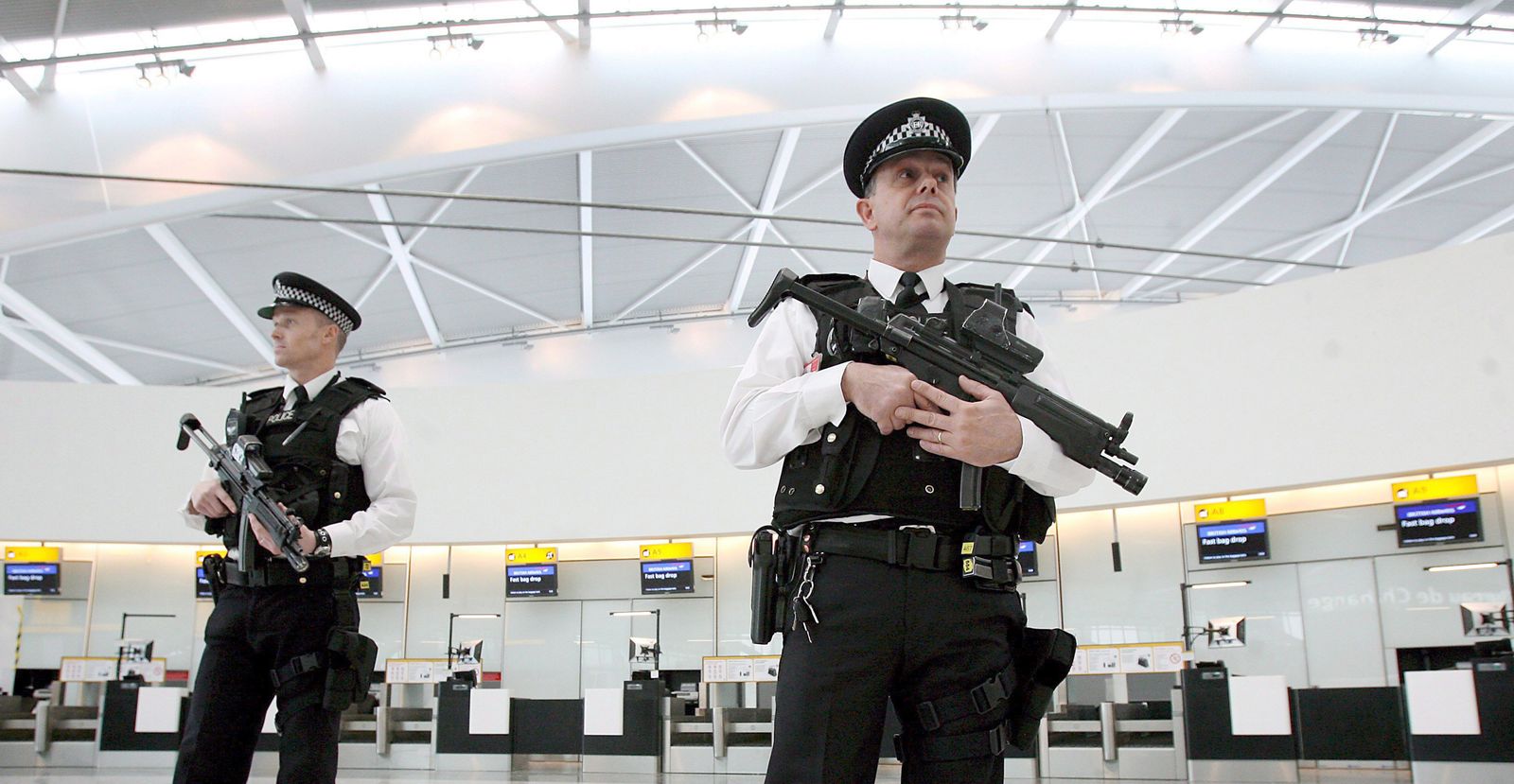 Police at Heathrow Airport in a 2008 archive photo: A terrorist plot in London