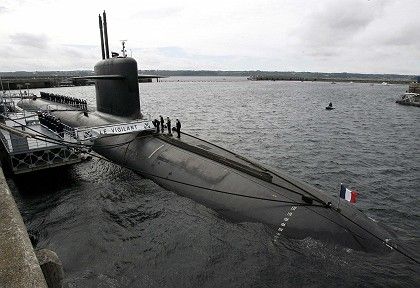 Sarkozy suggested to Merkel that maybe Germany would like a stake in France's nuclear arsenal, such as this nuclear submarine.

Seeing as they were discussing the benefits of all things atomic, the French president continued, he had another suggestion as well: Because the French nuclear umbrella protected Frances neighbors as well as La Grande Nation itself, perhaps the Germans would consider taking a political stake in the French atomic arsenal?

Both the chancellor and her foreign minister were speechless. The idea of possessing nuclear weapons is taboo in Germany. Sarzokys predecessor Jacques Chirac cautiously brought up the issue 12 years ago, but he quickly realized it was pointless to pursue it.

Steinmeier was the first to regain his composure, explaining that Germany did not seek to become a nuclear power, which is why the country had signed the Nuclear Non-Proliferation Treaty in 1975. Merkel offered a friendly smile and backed up her foreign minister.

A Series of Surprises

Ever since Sarkozy took office four months ago, he's been constantly surprising Berlin with one initiative after the next. Some might be useful, but the hyperactive president also has the tendency to approach sensitive diplomatic issues with all the finesse of an Energizer bunny. Hes so frantic that French newspapers have received pleas to introduce at least one Sarkozy-free day a week -- something which would no doubt go down well in Berlin.

The days where Sarkozys political hyperactivity was dismissed as simply exuberance from being fresh in office are long gone. Merkel, Steinmeier and German Finance Minister Peer Steinbrück have all been surprised, stymied, annoyed and flabbergasted time and time again by his proposals. But even worse is when Sarkozy appears to deliberately pick fights with Berlin simply because he doesnt like the way the Germans deal with him.

Its no surprise, then, that Steinmeier was careful to decline the offer of French nuclear weapons as politely as possible. He wanted to avoid provoking Sarkozy at all costs, since the French leader has made it extremely clear that he doesnt care much for uppity German ministers.

The foreign ministers cabinet colleague Steinbrück learned that lesson the hard way a few weeks ago, after he dared contradict Sarkozy during a discussion about the independence of the European Central Bank at an EU meeting. While Steinbrück was speaking, Sarkozy waved over the German finance ministers deputy, Thomas Mirow, and railed at him in French that he should stop his boss, saying, Thats not how one speaks to a president. Bemused, Mirow sat back down and kept quiet.

Sarkozy then proceeded to telephone Merkel to demand that Steinbrück be publicly reprimanded. But she pointed out that she could hardly criticize one of her ministers simply because he was defending the German governments official position on the matter. 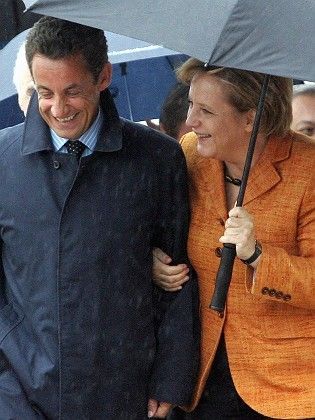 Sarkozy and Merkel looked the best of chums at Meseberg last week. But behind the scenes, Merkel is apparently getting on Sarko's nerves and the hyperactive French president is bewildering the Germans.

The Frenchman angrily related the story to the outgoing governor of Bavaria, Edmund Stoiber, who recently visited Sarkozy at the Élysée Palace in Paris. Shortly thereafter, it was leaked to German newspapers that Merkel was increasingly getting on Sarkozy's nerves.

But the Germans and French are not just clashing over questions of style -- issues of substance are also leading to cracks in the European Union's most important partnership. The German Foreign Ministry was completely surprised by French Foreign Minister Bernard Kouchners recent visit to Baghdad to express Frances new willingness to support the Americans there. Sarkozy was also keen to be the hero in the release of five Bulgarian nurses held for years by Libya, even though the German government played a key role in brokering a deal. He then proceeded to use the occasion to announce a controversial nuclear deal with Libya -- naturally without informing his EU partners in advance.

Its possible that Europes legendary Franco-German motor might shift into neutral for a while. Sarkozy has replaced consultations with a tendency to dictate. The implied threat for Berlin is clear: Either you go along with French plans, or Paris will go it alone.

And that could lead to the next showdown. Sarkzoy wants to force the EU to impose extra sanctions on Iran. But instead of working with Germany on a plan of action as a preferred partner, Paris simply informed Berlin of its intentions via a diplomatic note, as if it were any other EU member.

During the meeting at Meseberg, Steinmeier pointed out that the Germans had already drastically reduced their business interests in Iran. Instead of demanding more sanctions, Paris should call on French banks, energy firms and carmakers to scale back to German levels first. Since then, the tone has become somewhat harsher between the two European heavyweights.

Diplomats in Paris are spreading the story that Merkel, a conservative, supports the Sarkozy initiative, but shes being held back by her center-left Social Democratic ministers Steinmeier and Steinbrück -- something which Berlin denies.

Now both governments are trying to avoid a further escalation of the Franco-German spat. Relations between the two are really good, claims a Merkel confidant.

But Sarkozy will need some practice at sounding conciliatory. He told his cabinet last Wednesday that Merkel was a woman from the east, in reference to her East German roots.

The Élysée Palace quickly tried to smooth over the gaffe: Apparently Sarkozy was merely trying to point out that growing up in East Germany meant Merkel did not have the "same affection for France as people from the neighboring Rhineland."