Washington's army of diplomats in Europe has been taking on one country at a time. Germany stood at the top of the list and, initially, surrendered without even a whimper to the American demands. In 2008, the federal government in Berlin signed an agreement pushed by Washington allowing American officials wide-ranging access to the databases of German security agencies. It was only after leaders in Hamburg raised their objections to the deal that it was, temporarily, stalled in the Bundesrat, Germany's upper legislative chamber, which represents the interests of the states. The city-state has since withdrawn its objections after securing minor concessions on data protection provisions in the document, and the treaty is now set to be approved.

Step by step, and largely unnoticed by the public, the US has been pushing through similar arrangements in a number of European capitals. Washington reported its latest success in Vienna last week: The Austrian government said it was ready to grant US security agencies with free access to its police computers, complete with DNA and finger print data and a criminal registry.

The proceedings were not entirely peaceful. One Austrian government official reported "massive pressure." American Ambassador William C. Eacho, III. was apparently "very charming and friendly," when he appeared in the Austrian Chancellery and offered his "help." President Barack Obama's emissary said the administration in Washington was considering discontinuing the visa-waiver program for Austrians traveling to the United States because Austria wasn't sufficiently cooperating in the fight against terrorism.

In order to hinder the plans of the "boys in Washington," they would have to "work something out together." Apparently they were also able to achieve that with the guidance of the friendly ambassador. "Participation in the United States' 'Visa Waiver' program," Austrian Chancellor Werner Faymann wrote in a letter to the Viennese parliament, has been "linked to additional requirements for the exchange of information," including "an agreement to exchange data relating to the detection of terrorists." In other words, no data, no visa waiver. The small Alpine republic buckled.

But that's not the only front on which Washington's anti-terror combatants are active. A few days ago the US government announced further legislation designed to facilitate monitoring of new communication tools such as Twitter and Facebook as well as modern technologies such as Blackberrys and Skype. At almost exactly the same time, the US Treasury presented draft legislation that will allow security agencies free access to the details of all money transfers conducted through banks or credit cards.

And Washington doesn't just want to tap into and store this data on its own citizens, but on people worldwide, including Europeans.

European interior ministers have, so far at least, shown a good deal of understanding for these demands because they profit from the work of the US authorities, who sometimes share intelligence that European investigators could never hope to otherwise obtain. That's why matters will most probably be kept on a friendly and cooperative level with European interior ministers meeting on Thursday in Luxembourg with representatives of the US Department of Homeland Security and other agencies to discuss the terrorist threat and counter-terrorism measures.

Last weekend, the US issued a travel warning for Europe on the basis of possible imminent terrorist attacks. Germany Interior Minister Thomas de Maizière, however, has warned against scaremongering. There is apparently no concrete evidence of imminent attacks in Germany. But perhaps, speculates one European Union security expert, it was just a little "background music" for the real questions to be discussed in the trans-Atlantic talks: How deeply can American terrorism investigators peer into European computers, how extensively can they monitor European bank accounts, tap into Blackberrys or listen in on Skype calls?

And however much understanding EU security circles may have for Washington's requests, they are now having to take on opponents in their own camp, who are further complicating the issue: the members of the European Parliament (MEPs).

Many MEPs concerned with data privacy and domestic security issues are up in arms over the revelations in Vienna and the news from Washington. "The Americans want to blackmail us," said an agitated Alexander Alvaro, home affairs spokesman of the Germany's Free Democratic Party (FDP) in the European Parliament. The Americans have become "like a data octopus," he said, as if their tentacles were reaching out to all the world's data. He said that Europeans would not go along with it and that they would "defend themselves." Alvaro's Dutch colleague Sophie in 't Veld is also outraged: "Americans think everything is permitted." This attitude, she said, is now beginning to rub off on European investigators. Time and again executives come to in 't Veld in her role as chair of the European Parliament's Civil Liberties, Justice and Home Affairs committee to tell her confidentially that they have been illegally forced to hand over "their complete customer data."

In a letter to the president of the European Commission, the Liberals (as the FDP and similar parties in other countries are called in the European Parliament) have called on him to "clarify urgently" the details of the US government's intentions and to immediately inform parliament. Jan Philipp Albrecht, interior affairs expert for the German Green Party, has called for the "European Commission to put the US government in its place."

Comments such as this would previously have only caused a few smiles -- the European Parliament never had much of a say in matters or any real power. However, that changed when the Lisbon Treaty came into force on Dec. 1, 2009, and parliament now has a decisive say on numerous issues. The fact that MEPs take this new role very seriously, especially when it comes to data protection, was made clear when they blocked the so-called "SWIFT" agreement for months in the face of intense pressure from Washington.

Secretly and illegally at first, and later even with the consent of EU governments, the US authorities monitored the bank transfers of tens of thousands of European citizens for years as part of its anti-terrorism operation. This was done via access to the mainframe computers of the Society for Worldwide Interbank Financial Telecommunication (SWIFT).

The Belgian company processes money transfers between around 8,000 financial institutions in over 200 countries. Largely unchecked, the Americans were able to simply help themselves to the data. European governments and, especially their interior ministers, didn't think it was a bad thing. They also would have been keen to simply extend their deal allowing the Americans access to the transfers data. But members of the European Parliament didn't want to play along. At first a handful, then many and finally almost all the members of parliament joined forces to hinder the process for months.

The Americans finally yielded. And even after parliament's intervention, things still aren't totally clean. But it has, at least, forced Washington to agree to accept European data protection standards. For example, US officials must now state concrete grounds for suspicion when requesting to see a European citizen's financial transfers.

And they even have to tolerate an EU watchdog in their own bank intelligence offices in Washington. That's why, data protection experts suspect, Washington is now bringing in new laws. They want a return to the good old days of unbridled spying. And that's exactly what Europe's brave MEP's are fighting to prevent -- and they've already chosen their weapon.

An agreement between the EU and the US on the exchange of airline passenger data -- the "Passenger Name Records (PNR)" in US government jargon -- is currently due for renewal. The agreement allows the US Department of Homeland Security access to the databases of European airlines and the information they hold on their customers. Under the current terms, Homeland Security officials have been able to collect anything that interested them. If it was up to Europe's interior ministers, they would continue to be able to do so in the future.

But now, at the end of the process, Europe's interior ministers must obtain the approval of the European Parliament. And "I can guarantee they won't get it for an agreement like the old one" said Dutch politician in 't Veld. Only in limited cases of well-founded suspicion should an airline be forced to surrender data on its customers, she said. Data storage should also be restricted and the US should be barred from transferring data to third party governments. A "Wild West" approach to data will no longer be accepted, said Axel Voss, an MEP with Germany's Christian Democratic Union (CDU) who is a member of the interior and justice committee.

Many MEPs also have the feeling that they are being tricked. If the United States first signs an agreement, like SWIFT, and then tries to overturn it in other ways, or if Washington forces through what is not achievable at EU level by blackmailing individual national governments one by one, then how and why should negotiations continue? asks Civil Liberties, Justice and Home Affairs Committee chairwoman in 't Veld."The Americans' word doesn't count for much anymore anyway," she said.

Indeed, long and tricky negotiations are likely to be up next on the agenda between Washington, Europe's interior ministers and the MEPs. 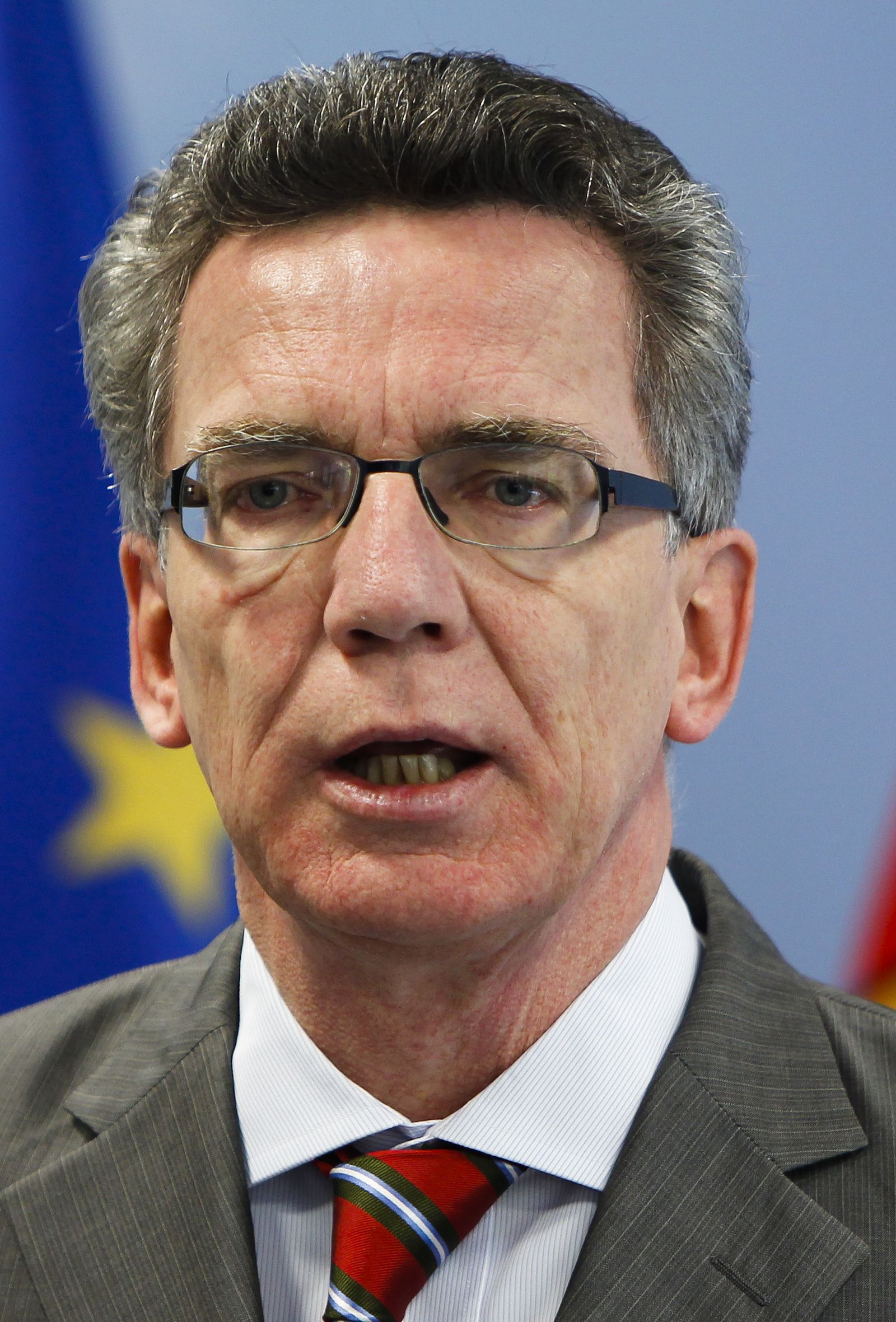 German Interior Minister Thomas de Maiziere has warned against the scaremongering of terror threats in Europe.