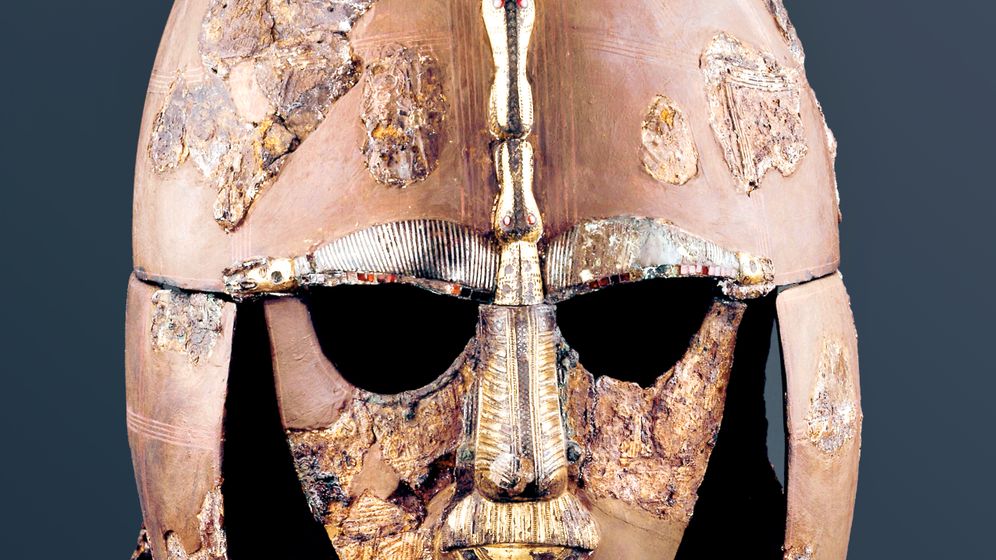 The fear of a violent conquest of their country is deeply engrained in the English psyche. One of the likely reasons for this fear is that their ancestors committed this misdeed themselves.

According to the Anglo-Saxon Chronicle, two Germanic tribesmen, Hengist and Horsa, came ashore on the coast of Kent in southeast England in the year 449. They had sailed 600 kilometers (372 miles) down the coast from their native North Frisia, and had then made the crossing to a green and pleasant Britain.

The country they encountered was a cultivated place. Emperor Claudius had declared the island a Roman province in 43 A.D., and had introduced theaters and paved streets. There were 30,000 people living in Londinium in late antiquity.

All of this was destroyed, however, when the adventurers -- who became more and more numerous as families were reunited -- arrived from across the sea.

But how many people came to Britain across the North Sea in total? A thousand? Ten thousand? Or was it an even higher number?

Until now, the so-called Minimalists have set the tone in British archeology. They believe in what they call an "elite transfer", in which a small caste of Germanic noble warriors, perhaps a few thousand, placed themselves at the top of society in a coup of sorts, and eventually even displaced the Celtic language with their own. Many contemporary Britons, not overly keen on having such a close kinship with the Continent, like this scenario.

Thomas Sheppard, a museum curator, discovered this sentiment almost a century ago. In 1919, officers asked for his assistance after they accidentally discovered the roughly 1,500-year-old grave of an Anglo-Saxon woman while digging trenches in eastern England.

Sheppard concluded that the woman's bleached bones came from "conquerors from Germany" and announced: "These are our ancestors!" But the soldiers were thunderstruck. At first they cursed and refused to believe that they were related to the "Huns." But then the mood darkened. The trip back to the barracks "was like a funeral procession," Sheppard wrote.

But there is no use in denying it. It is now clear that the nation which most dislikes the Germans were once Krauts themselves. A number of studies reinforce the intimacy of the German-English relationship.

Biologists at University College in London studied a segment of the Y chromosome that appears in almost all Danish and northern German men -- and is also surprisingly common in Great Britain. This suggests that a veritable flood of people must have once crossed the North Sea.

Taking Advantage of an Unprotected Island

New isotope studies conducted in Anglo-Saxon cemeteries produced similar results. When chemists analyzed the tooth enamel and bones of skeletons, they found that about 20 percent of the dead were newcomers who had originated on mainland Europe.

Archeologist Heinrich Härke of the University of Reading has now come up with a quantitative estimate of the migratory movement. He suspects that "up to 200,000 emigrants" crossed the North Sea.

The massive movement of people was apparently triggered in 407 A.D., the year in which the ailing Roman Empire withdrew much of its army from Britain. Soon afterwards, it stopped paying its soldiers altogether. As a result, the last legionaries took off.

This left the island unprotected, an opportunity that the starving people on the continent couldn't pass up. Angles, Saxons and Jutes left their mound dwellings and broad bean fields in the wetlands of northern Europe in droves.

Entire family clans set out to sea, usually in the spring and summer when the water was calm. Their ships were bulging with household goods, cows and horses. According to an old chronicle, the land of the Angles was soon "abandoned."

The new arrivals established their first cemetery around 410 in Dorchester-on-Thames, near Oxford. It was filled with the same kinds of urns, brooches and other ornaments found along the Elbe River in Germany.

Archeologists have now excavated such burial grounds in large numbers. The Germanic farmers of Spong Hill, in eastern England, remained in contact with their old homeland for two to three generations. Härke speculates that a steady stream of adventurers left the mainland between 450 and 550. Nevertheless, there are still inconsistencies. The estimated 200,000 intruders faced an overwhelming number of Britons, about a million, and yet the invaders triumphed. The kingdoms that soon developed, like East Anglia, Wessex (West Saxony) and Essex (East Saxony) were run by robust chieftains like Sigeric and Cynewulf.

The Celts were no match for these roughnecks. The Romans had taught them how to play the lyre and drink copious amounts of wine, but the populace in the regions controlled by the Pax Romana was barred from carrying weapons. As a result, the local peoples, no longer accustomed to the sword, lost one battle after the next and were forced to the edges of the island.

The Old English heroic epic "Beowulf" suggests how coarse and combative life was among the pagan conquerors in their reed-covered huts. They had soon occupied eastern and central England.

The famous legend of King Arthur also originated in that era -- as a form of counter-propaganda. Historians characterize the work as a "defensive myth" created by the original Christian inhabitants (with the Holy Grail possibly symbolizing the communion cup). Perhaps the King Arthur legend is based on a mythical Celtic king who won a victory at Mount Badon around 500 A.D.

In truth, however, the army of the Britons was usually in retreat. Many fell into captivity. According to Härke, the captured Britons lived a miserable existence as "servants and maids" in the villages of the Anglo-Saxons.

There were two types of grave in the cemeteries of the time: those containing swords and other weapons, and those with none. The local inhabitants, deprived of their rights, were apparently buried in the latter type of grave.

The London geneticist Mark Thomas is convinced that the conquerors from the continent maintained "social structures similar to apartheid," a view supported by the laws of King Ine of Wessex (around 695). They specify six social levels for the Britons, five of which refer to slaves.

As a result of the brutal subjugation, the reproduction rate of the losing Britons was apparently curbed, while the winners had many children. The consequences are still evident today in the British gene pool. "People from rural England are more closely related to the northern Germans than to their countrymen from Wales or Scotland," Härke explains.

According to Härke, every other man on the island carries the "Friesian gene."