Spring has come to Minsk, and it arrived virtually overnight. The long winter appears to be over, and bulky jackets have disappeared from the streets of the city. And confidence this week seems in no short supply in the Belarusian capital. 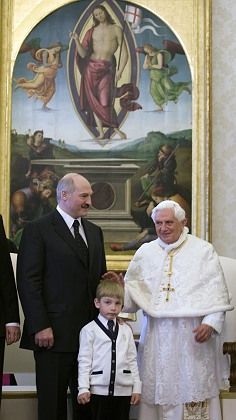 Belarusian President Alexander Lukashenko's relations with the West have been improving.

"Victory, victory, victory," a crowd chants in front of large screen next to the city's sports arena. After beating Hungary at the world championships in Switzerland, the Belarusian ice hockey team has just made it into the next round.

The words "We won!" are plastered on banners stretched across the broad streets of Minsk. May 9 is just around the corner, the day of the Russian triumph over Nazi Germany, which is celebrated in Belarus in accordance with established Soviet tradition.

The government media are also spreading good cheer. For days, they have been reporting on another victory. "Alexander Lukashenko has opened a window to Europe," they proclaim. The reference to Peter the Great, Russia's powerful reformist czar, is deliberate.

More than 300 years ago, Peter the Great traveled to the Netherlands in an attempt to establish Russian ties to the West. In the opinion of the political leadership in Minsk, Lukashenko achieved a similarly historic step by making a trip to Italy. Prior to the visit, the Belarusian president, ostracized in the West, had not set foot on Western European soil for 11 years. Last Monday, however, he met with Pope Benedict XVI for roughly half an hour and then with Italian Prime Minister Silvio Berlusconi for three hours.

But the real breakthrough is yet to come. At a summit meeting in Prague this Thursday, the European Union plans to inaugurate its "Eastern Partnership," a program meant to advance democratic reforms in the former Soviet republics of Ukraine, Georgia, Armenia, Azerbaijan and Moldova. After prolonged hesitation, Brussels finally invited Belarus to join the fold. The West's blockade is over, the Minsk edition of Komsomolskaya Pravda crowed, insisting that Lukashenko is now "a legitimate player in European politics."

Alexander Lukashenko, of all people? The autocrat of Minsk, whose country former US Secretary of State Condoleezza Rice consistently referred to as central Europe's "last true dictatorship?" The man who, after taking office in 1994, eliminated the opposition, had dissidents thrown into prison and critical newspapers banned? The man who expelled US diplomats and EU representatives and, in 2004, secured himself an unlimited term in a dubious referendum?

But the EU, which has now partially suspended its entry ban on Belarusian politicians, including Lukashenko, insists that he is moving in the right direction, after having released political prisoners and accepted two opposition newspapers.

Not everyone is pleased about the Minsk autocrat's de facto rehabilitation. The Swedes, Belgians and Dutch were sharply opposed to the EU's decision. Czech President Václav Klaus says that he will "not shake his hand" if Lukashenko decides to attend the summit in person and does not, as Brussels has suggested, send subordinates. It would "not be in Lukashenko's interest" to attend, current European Council President and Czech Foreign Minister Karel Schwarzenberg told SPIEGEL.

It was a ticklish question earlier this week, but Lukashenko has indeed opted out of a visit to Prague. Still, many in Minsk have noticed just how much the former director of a collective farm enjoys his new role. The support coming from Berlusconi, who had told Lukashenko that he hoped to see him in Prague, and the audience with Pope Benedict XVI may have bolstered his confidence.

Growing Old with the Archenemy

The opposition is deeply troubled by Lukashenko's new relationship with the West. Its leaders tend to congregate in places like Café Brigantina on Victory Square in Minsk, or in the impoverished villages near a tractor plant in the countryside, where they have fled with their small offices. The opposition movement is still comprised of the same people as it was 15 years ago. They have grown old with their archenemy, Lukashenko, and yet none of their visions has become reality.

Extending an invitation to Lukashenko is "political capitulation on the part of Europe," says Anatoly Lebedko, the head of the center-right United Civil Party of Belarus. The West, he says, is simply unable to come up with a concept for dealing with Belarus. Alexander Kozulin, a former presidential candidate who was locked away in one of Lukashenko's prisons for two years, calls the EU's move a "betrayal of the Belarusian people," for which he holds mainly the Germans and the Poles responsible because, as he says, they are trying to accelerate a change in course. Kozulin was worried that Lukashenko would enter Prague "the way Julius Caesar entered Rome."

Belarus's opposition has little power, because, in a country with a government-run economy, it lacks the support of a class of private business owners. Although it survives solely on donations from the West, it expresses sentiments that also exist elsewhere

"Europe is changing horses, because it cannot bring about regime change from within," says philosopher and political scientist Vladimir Matzkevich. The Americans, in his view, focused their efforts far too long on unrest in the streets, while the Western Europeans overestimated the opposition's role. Matzkevich believes that this drove young people into Lukashenko's arms and turned them into EU skeptics.

Why then is Lukashenko responding to the overture from the West, which he has consistently accused of waging a "brutal war" against him? "He is driven by pure necessity," says Stanislau Bohdankevich, the former head of the Belarusian national bank, in his office on the 17th floor of a Minsk office building. At 72, he begins to wheeze when agitated.

According to Bohdankevich, Belarusian exports have plummeted by 40 percent,because the Russian market has collapsed and the country has overproduced, so that it now has goods worth €15 billion ($20 billion) gathering dust in warehouses. Lukashenko was forced to massively devalue the Belarusian ruble, causing the country's currency reserves to shrink. To make matters worse, Russia has raised the price of the natural gas it exports to Belarus, once a close ally.

Government-owned companies are being sold to raise cash. However, Lukashenko is offering them to the West, not Russia, to avoid becoming too dependent on Moscow. On a recent visit to Minsk, the Emir of Qatar expressed interest in key assets of the country's oil-processing industry.

The Russians have reacted to these efforts with as much suspicion as to the EU's recent courting of Lukashenko. Russian Foreign Minister Sergei Lavrov characterized the EU's "Eastern Partnership" program as an attempt to create a zone of influence on Russia's doorstep, while another Kremlin politician called it a "new cordon sanitaire." Still, Moscow is still expanding its military cooperation with Minsk. The two countries recently agreed to establish a joint air defense system.

But Lukashenko is a nationalist and not unconditionally pro-Russian, says Bohdankevich, who calls him a "smart and shrewd" leader willing to turn to the East or the West to get what he needs to preserve his regime. Nevertheless, Bohdankevich speculates, the invitation to the EU summit could be the last chance to "bring the country closer to European values."

Lukashenko, though, is holding his cards close. In Minsk, the Belarusian president is perceived as a gifted gambler, his audience with the pope last Monday being a case in point. To meet with the leader of the Catholic Church, Lukashenko, who has been separated from his wife for years but is not divorced, brought along his latest girlfriend and his five-year-old illegitimate son. The boy was even permitted to present Benedict with a schoolbook. The president's personal physician is believed to be his mother.

The ordinary citizens of Minsk are well aware of Lukashenko's personal life, but the Belarusian newspapers are not permitted to write about it. Otherwise they would risk being banned.