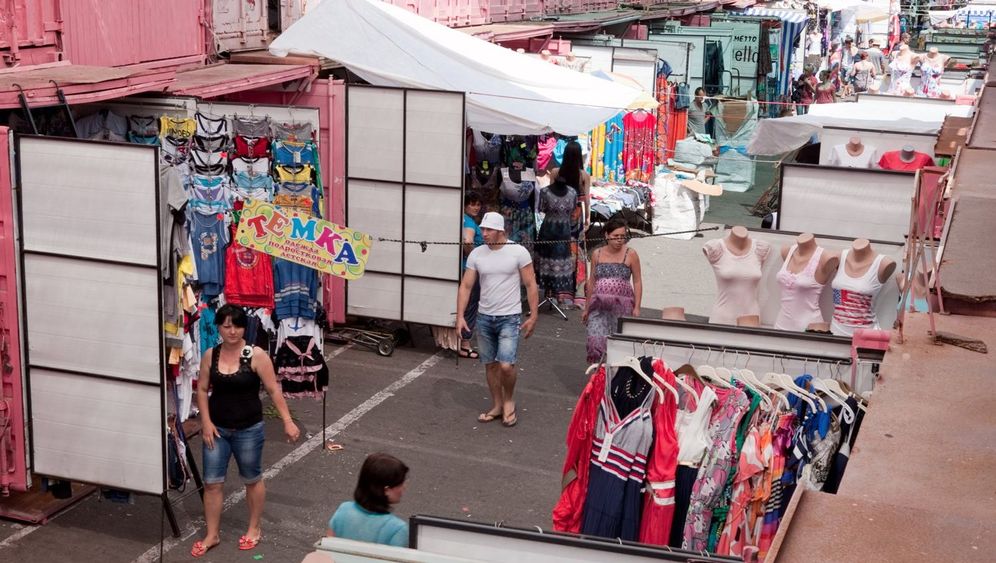 The products Tayo Abraham has on sale today made the same voyage as the Nigerian trader did five years ago. They came over the Black Sea. Five years ago, Abraham, 28, left his wife back in Africa and headed to Europe, the distant land of promise. He ended up on its outer edge, here, in the Ukrainian Black Sea port of Odessa.

Abraham plies his trade in what must be Europe's largest open-air market. It stands on the outskirts of Odessa and is known as "7 km." This labyrinth of shipping containers covers an area the size of 110 football pitches, and it would be easy to get lost if the containers weren't painted blue, green or orange to identify their sector. Every day, this city of sheet steel attracts some 200,000 shoppers who buy €20 million ($25 million) worth of goods.

The market's management says some 60,000 people work here and that the place gives the entire region an important economic boost.

But "7 km" is a hub for product pirates and smugglers. It is regarded as the biggest black market on the European continent. Traders sell fake Adidas shoes and €15 euro imitations of Louis Vuitton luxury handbags.

Tayo Abraham takes a pair of sneakers from one of his boxes. With their three stripes, they are the spitting image of Adidas brand shoes. "In truth they come from China or Turkey," says Abraham. A pair costs the equivalent of €12. He also sells shoes bearing the exclusive Lacoste crocodile for an affordable €15.

Demand is strong. Abraham rents two containers piled on top of each other. He has turned the lower one into an improvised shoe shop with shelves and a cracked mirror. The container above is filled with boxes of merchandize for wholesale customers who buy bulk and smuggle the goods westward into the rest of Europe.

Police and Authorities Support the Trade

The 2012 European football championship, co-hosted by Ukraine and Poland, is big business for the traders of "7 km." Abraham fishes a box of flipflops from his container. They are adorned with the brand name "UEFA Euro 2012" and the logo of the championship, a football framed by two flowers in the national colors of co-hosts Poland and Ukraine.

"I'm selling crateloads of them," says Abraham. He's also doing a roaring trade in Euro 2012 felt hats and stuffed toy mascots of the tournament, Slavek and Slavko, the rights to which are owned by US media giant Warner Bros.

The body that governs European football, UEFA, is losing merchandising revenue as a result. "We don't know how much counterfeit stock is on the market," says UEFA's sales manager Thibaut Potdevin. "So it is hard for us to estimate the damage."

There isn't much that UEFA can do about it. Ukraine passed a law before the championship to protect UEFA's trademark. But black markets like that in Odessa have influential allies among the police and local authorities. Market director Anatoly Berladin used to be deputy head of the local militia force. Oleg Kolesnikov, one of the bazaar's backers, is a member of Odessa city council. "So far, no one has managed to disrupt our business," he says.

No one has made a serious effort to do so. It's an open secret in Odessa that Ukrainian authorities are knowingly letting counterfeit merchandise from Turkey and China get through the customs controls. Abraham said the wholesaler who supplies him bribes the port authority. "It is clear that the customs authority is getting a share of the proceeds from the smuggling," says an employee of Warner Bros. who did not want to be named.

When traders come to buy whole crates of trainers and Euro flipflops, Abraham knows where they're headed. The smugglers transport the goods to the breakaway territory of Transnistria some 80 kilometers away. The strip of land between Moldova and Ukraine isn't internationally recognized and is regarded as a bastion of smugglers. From there, the counterfeit goods are taken to Moldova and then on to Romania -- in the EU.

The market administration of "7 km" charges $300 rent per container per month, and the lease on a store on the site costs $1,000. But it's worth the money, even for small traders. Tayo Abraham earns around $1,200 per month. Market director Berladin denies there is any black market trading or product piracy. "Everything here is above board," he insists." But he adds that it's impossible to check each one of the 14,000 traders.

There's a pop song with the lyric "On the '7 km' you can shop until your head spins." Thousands of cars cram the giant parking area.

A short distance away stands a branch of Epicentr, a chain of DIY stores that is sponsoring the tournament and is entitled to sell official fan merchandize. There's no shortage of parking spots here either -- the difference is that they're all empty.