When leaders of the 27 European Union member states meet in Brussels at 6 p.m. on Thursday for a "working dinner," they could be in for a long night. There are certainly plenty of items on the agenda. Under discussion will be some long-pending issues, such as whether and how Europe intends to tame its banks and stock markets in a bid to avert a repeat of the recent financial crisis.

And there is another point that needs to be urgently addressed: How will the EU present itself in a few days at the UN Climate Change Conference in Copenhagen? Will it push for reform or put the brakes on the talks?

But leaders will probably only have time to consider these issues during the first course. After all, there are pressing staffing decisions to be resolved, and such issues always take top priority within the European Union.

The current discussion is about two jobs, both of which are being created under the reforms of the Lisbon Treaty (see graphic). Both promise plenty of glamour and appearances on international television, not to mention travel to all parts of the world. Although whoever gets these jobs will not really gain much real power as a result, they will appear to be powerful. And, as a result, many countries are clamoring to fill the positions with one of their own politicians.

The first vacancy is for a permanent president of the European Council, whose tasks will include preparing the regular meetings of EU leaders, moderating those summits and then presenting final statements to the press. In addition, he or she will attend Europe's big political events, such as EU summits with Russia or China or meetings with India and the US.

The second job will be for the future EU foreign minister, officially called the "high representative." That job will involve less influence but more travel. For weeks now, aspirants have been jostling for the post, although most, like British Foreign Secretary David Miliband, repeat on a daily basis that they do not want the job. But, they add, they will do it if others insist.

Then there are others who are applying for both vacancies, such as Estonia's President Toomas Hendrik Ilves. Thus, all attempts to engage in the usual EU practice of holding two-, three- or four-way discussions to forge factions ahead of time -- along the lines of: You vote for my candidate, and I'll support your favorite -- have gone awry.

As some see it, the person to blame for all this is Swedish Prime Minister Fredrik Reinfeldt, whose country currently holds the six-month rotating presidency of the European Union. In their view, Reinfeldt failed to bring all the EU's 27 member states into line. Reinfeldt has defended himself, saying there were a lot of things that stood in his way: the right and the left both wanted to be represented; Europe's north, south, west and east all demanded representation; large and small member states all insisted on getting their due; and now even women are clamoring for a spot. All this, when there are only two positions to fill.

As a partial solution to this mess, a number of vacant positions were jammed into the package. For example, there's the position of secretary-general of the Council of the European Union, an influential administrative position that carries little political weight. Also under consideration is the allocation of a number of important departments in the re-organized European Commission. Even the issue of who will become the next president of the European Central Bank could form part of the mega-deal.

Then there are those who say that the Poles are mainly to blame for the whole mess. All of a sudden, they are demanding that the selection process for the super-jobs must be "as transparent and democratic as possible." As part of this, they want the candidates to be required to speak before heads of state and government about their "vision" and how they plan to carry out their job if they are elected.

But few of the candidates are keen on such "job interviews" because they fear that an embarrassing defeat could have political consequences back home. What is a prime minister supposed to say to his people after his application for a top job in Brussels has failed? "I'm back again and I didn't get it, but I still love you," Reinfeldt said, mocking the Polish proposal. He added that the suggestion was "unrealistic."

On Thursday evening, 26 men and one women will be sitting around a table, looking at the list of names and waiting for inspiration. Since the two positions are politically linked -- in the sense that one must go to the left and one to the right -- the two jobs can only be allocated in conjunction. But experienced diplomats are hoping that, if the more difficult issue of who will be president is solved, then selecting the foreign minister will go a whole lot more quickly. At the moment, the leading candidates for the latter position seem to be Massimo D'Alema, Italy's former prime minister and former foreign minister, and David Miliband, Britain's current foreign secretary.

But it won't be so easy. Individual countries as well as smaller grouping of countries continue to be determined to support their candidates to the end and to put the kibosh on everything else. The British are still pulling for former Prime Minister Tony Blair, despite the fact that chances are extremely thin that he would be able to rally a majority of the votes behind him. Spain's government has said it will support Blair's candidacy. But, according to rumors among insiders, it will only do so if other candidates are thrown out of the running, which would make it much easier for their favorite -- former Spanish Prime Minister Felipe Gonzalez -- to slide into the spot.

German Chancellor Angela Merkel and French President Nicolas Sarkozy are -- for reasons known only to themselves -- in favor of Belgium's Prime Minister Herman Van Rompuy, according to sources in Brussels. The German side denies that is the case, however. The British and the Poles do not want him in any case and would rather have Dutch Prime Minister Jan Peter Balkenende, nicknamed "Harry Potter," than Van Rompuy. Meanwhile, the experienced Luxembourg prime minister, Jean-Claude Juncker, is lurking in the background, wondering if the current confusion might present him with a chance.

If their demands are not met, female members of the European Parliament from across the political spectrum have threatened to reject the entire new Commission when it is put up for parliamentary approval. The most promising female candidate is former Latvian President Vaira Vike-Freiberga, one of the few candidates who has openly declared she is running for the post of president. But she angered many of the powerful men who will be choosing the president when she criticized the closed-door selection process, saying the EU was functioning "like the former Soviet Union."

There are now said to be more than 20 candidates. Making a rational choice is all but impossible. There is already talk that the dinner could go on until Friday morning, or -- if it breaks up late on Thursday night without a result -- be resumed on the weekend. It is also not impossible that the decision will be postponed until the next meeting of EU leaders, on Dec. 10-11.

One adviser to the German government, who preferred not to be named, said that he fears that, in the end, "just anyone will be elected, it doesn't matter who." The main thing, he adds, is that "the whole business is settled and no one has been seen to openly lose." But if that happens, then no one has won either -- including Europe.

If that is the approach, then the decision could in fact be reached very quickly, without a long, drawn-out drama -- something some of the participants hope will become reality. 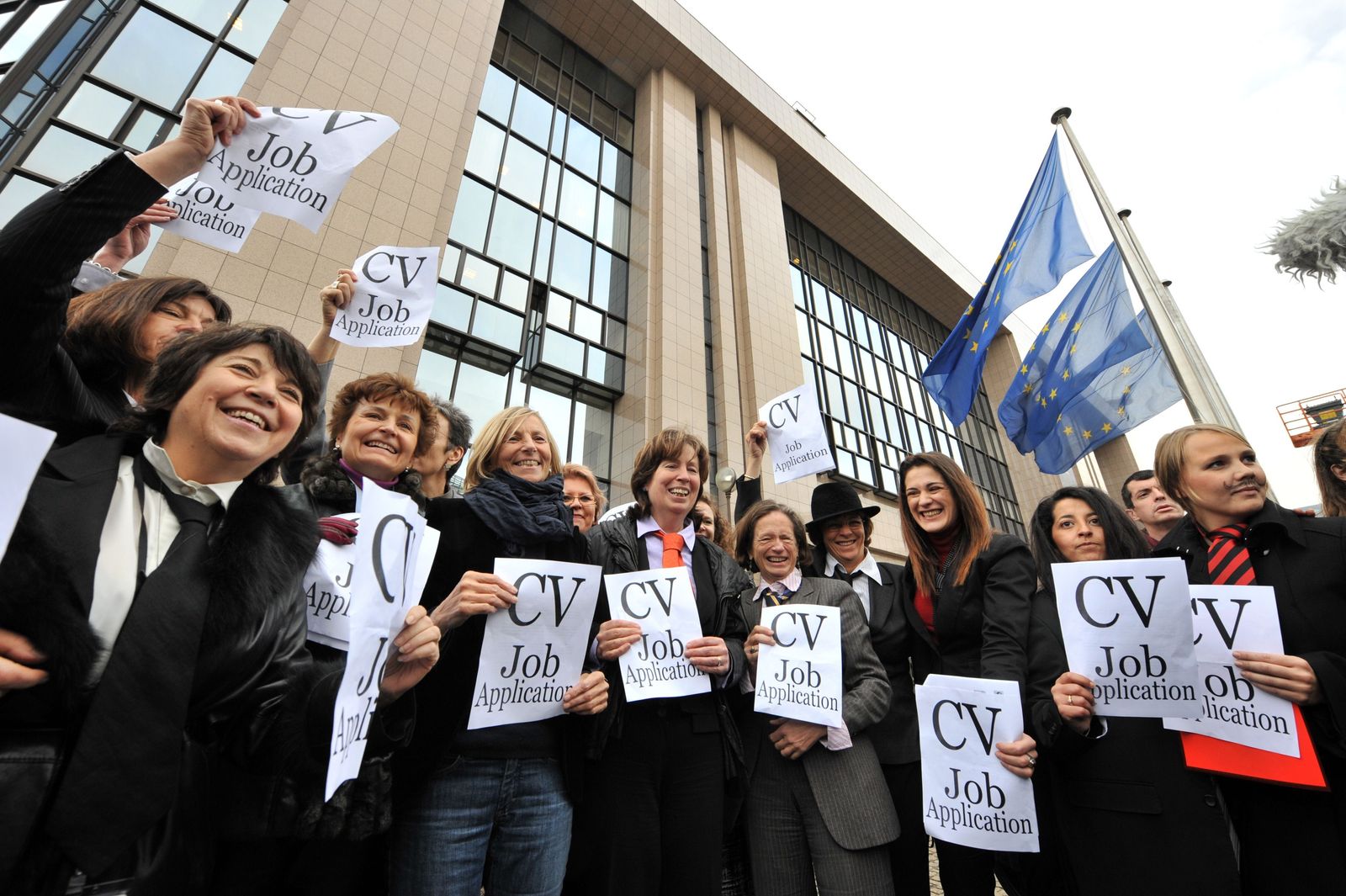 Female members of the European Parliament protest against the male-dominated candidate list.