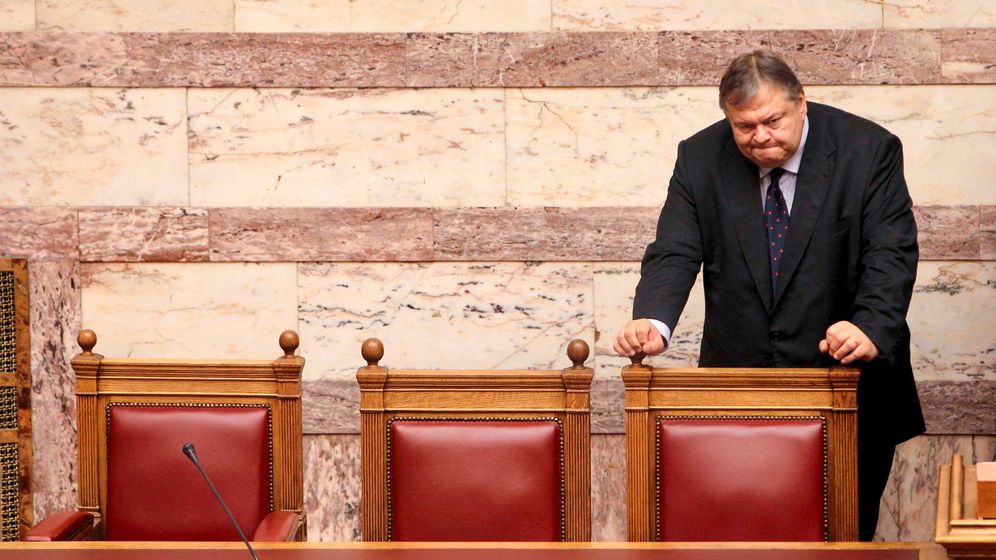 Photo Gallery: The Man in Charge of Greek Austerity

Evangelos Venizelos is on edge. After having called for national unity so many times in the fight against his country's "historical and existential crisis," he is standing before members of parliament once again to implore the opponents of the radical austerity program "not to play with fire." Raising his index finger, he warns: "We are the running the risk of burning ourselves."

Venizelos leans heavily against the podium, his head pulled down between his shoulders like a bull about to attack, and his brow furrowed with deep, angry lines. "We are in a state of war," he tells the members of parliament. It isn't quite clear whether he is referring to the fight against the financial crisis or the resistance coming from his own people, which is manifesting itself in angry mass protests and bloody street battles outside the parliament building in Athens.

Greece is not even experiencing "the worst phase of the crisis" yet, he rages, which is why the important answers to the question of how to go about rescuing the country are needed now. "Everything else means absolutely nothing."

Venizelos has run out of patience. He seems thin-skinned, irritated and beleaguered. He is tired of having to explain the country's financial mess over and over again. He never leaves any room for doubt that he knows his material and what is good for his country, especially when, as he is doing now in the parliament, he explains the world in long, drawn-out, unscripted monologues.

When the cabinet was reshuffled in June Venizelos, 54, went from his role as Prime Minister George Papandreou's eternal competitor, isolated as minister of defense, to Papandreou's side as his partner and deputy prime minister. He had rarely come this close to his own goal of coming into power, not even in November 2007, when he officially challenged Papandreou in his position as party leader and top candidate and then, in a referendum of party members, failed with only 34 percent of votes.

The right-wing national opposition group LAOS heaped scorn on his appointment as deputy prime minister, saying: "We now have two prime ministers, one for Europe's salons and the other to do the dirty work at home."

The cabinet reshuffle was apparently a last-ditch effort on Papandreou's part. Without Venizelos he would have been finished this summer. He would not have managed to convince the leftists in his own party to accept his tough austerity program, with all its tough measures, on his own.

The premier has allowed himself to be rescued by his toughest rival while neutralizing and politically humiliating him at the same time. Venizelos was merely the second choice as finance minister, because Loukas Papademos, the former vice-president of the European Central Bank, turned down the job. Venizelos knows this, which is why he was so reluctant to comply with Papandreou's request.

'A Political Heavyweight ... in the Second Tier'

It is a very special team that has come together in Greece's hour of need. On the one hand, there is the intellectual, worldly prime minister, the scion of one of the most powerful Greek political dynasties, born in the United States and, after having lived abroad for a long time, always seeming a little foreign to the Greeks. On the other hand, there is Venizelos, the boorish know-it-all, a man who has held almost every ministerial post in the Greek cabinet but who, as a professor of constitutional law, hardly adds anything more to the fight against national bankruptcy than his role as leader of the party's powerful left wing. "He is a political heavyweight," says a former fellow cabinet member, "but always in the second tier."

"His political fate is now inextricably linked to Papandreou," says government expert Konstantinos Zoulas of the respected daily newspaper Kathimerini. "It was a checkmate move by the prime minister."

Ambitious Venizelos hardly stands a chance of winning in his fight against Papandreou, though. "He will never be head of the government again," says a fellow senior party member. That's in no small part due to the fact that the crisis is dragging the prime minister's former challenger irreversibly into the undertow of Papandreou's loss of popularity.

According to current polls, only about 20 percent of Greeks say they would vote for the governing socialist Pasok party today. Papandreou's approval rating even dropped below 20 percent, an historic low for a sitting prime minister. Meanwhile, the finance minister remains at his side as his popularity ratings plummet. "Venizelos underestimated the problem and overestimated himself," says the senior party member.

In fact, Venizelos, an experienced attorney, apparently relied too heavily on his qualities as a doer. As a criminal attorney in 1989, for example, he secured an acquittal on corruption charges for then Prime Minister Andreas Papandreou, founder of the Pasok party and father of the current premier.

When no one in the sports world wanted to believe that successful Olympic Games could be held in Athens in 2004, Venizelos, as minister of culture and sports, took on the task of coordinating the construction work. The stadiums and arenas were finished in time, although the costs of €7 billion ($9.6 billion) were at least 50 percent higher than planned.

He can hardly expect a similar opportunity to distinguish himself today. The Greeks are handing most of the credit for successes in obtaining new bailout packages and loan tranches to Papandreou, who is known as a skilled negotiator. Meanwhile, Venizelos and the rest of the government are blamed for the steep cuts and austerity measures needed to achieve them.

As austerity minister, he also suffers from a credibility problem. It was only three years ago that Venizelos, as an opposition politician, vehemently battled the sale of the chronically broke state-owned carrier Olympic Airlines, arguing that it should remain in government hands. Now he is pushing for the unrelenting privatization of state-owned businesses.

The liberal, left-leaning daily newspaper Eleftherotypia has already caricatured the finance minister, wearing the brown uniform of the Nazi SA paramilitary organization, as the overseer of a concentration camp-like "Hellas Special Economic Zone." In Greece, equating someone with the hated German occupiers is seen as the height of political scorn.

In addition, rumors that Papandreou might be weary of his job have proven to be greatly exaggerated. "The Papandreous don't simply abandon power," says author and Pasok expert Tassos Pappas, noting that the prime minister is depending on the support of the 40 percent of Greeks who call themselves "undecided" in surveys.

"Papandreou is exhausted and disappointed by the poor pace of reforms, but he isn't tired of being in office," says Dimitrios Droutsas, Greece's foreign minister until the summer and still a close advisor to the prime minister. According to Droutsas, no one dares to call for Papandreou's resignation at the moment.

The only real threat to skilled politician Papandreou is the fickle nature of his fellow party members. After he had boxed the toughest austerity measures yet through the parliament on Thursday, his original majority of nine votes shrank to only two. And no one knows whether other Socialist members of parliament will also yield to the pressure of the street.

Such dissenters could indeed force a change in the party leadership. In fact, the names of potential successors have already been mentioned, but Venizelos is not one of them. The current favorites appear to be Education Minister Anna Diamantopoulo, 52, a former European Union commissioner, and particularly Economics Minister Michalis Chrysochoidis, 55. He gained the reputation of being successful and hard-hitting when, as minister of public order, he broke up the "17th of November" and "Revolutionary Struggle" terrorist organizations. He is highly respected in Europe.

Greece is "not a poor country," Chrysochoidis keeps saying, invoking the pride of his countrymen, but he points out that it has been "badly run for decades." This is the sort of language that plays well with voters.

But former minister Droutsas still believes that the debate over a successor to Papandreou is virtual. "Pasok is a Papandreou party," says the member of the European Parliament, and Papandreou is the future of Greece."

4 Bilder Photo Gallery: The Man in Charge of Greek Austerity