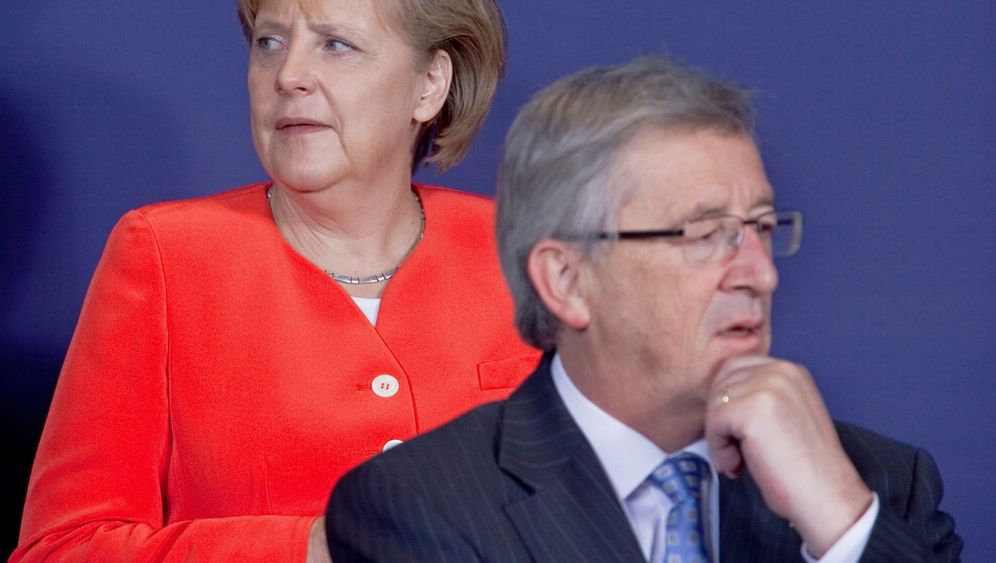 Hungarian Prime Minister Viktor Orbán hadn't received this much applause in Brussels in a long time. European politicians had been criticizing him for weeks over his restrictive new media law. But last Tuesday hundreds of officials with the European People's Party celebrated the conservative politician like a hero.

The delegates from the EPP, a collection of Christian Democrats and other center-right parties from across Europe, had assembled in the Galeries Royales Saint-Hubert -- and they were especially enamored of Orbán's criticism of plans by German Chancellor Angela Merkel, a Christian Democrat herself, to establish an economic government for members of the euro zone. "Have respect for the agreements," Orbán told his audience, "and do not discourage the 10 EU countries that are not euro-zone members." Germans in the audience, European parliamentarians from Merkel's CDU and its Bavarian sister party, the Christian Social Democrats (CSU), likewise applauded Orbán.

It was a manifestation of their displeasure with the chancellor. Merkel had intended to impose the stamp of her reforms on Europe this year. In recent weeks, she and French President Nicolas Sarkozy had unveiled a long-term plan intended to provide a permanent solution for the ongoing euro crisis.

But other EU member states feel overrun by the new German-French axis, and resistance to the plan is currently taking shape across the 27-member bloc. The European Commission envisions a completely different structure for the planned crisis fund than that proposed by Berlin and Paris. Meanwhile, EU leaders strongly oppose the German-French competitiveness pact. Planned as a coup, the proposal "went down like a lead balloon" at an EU summit on the Friday before last, the Financial Times concluded.

Criticism from All Sides

European leaders clearly relished tearing apart Merkel's ideas for a European economic government. Everyone had something to criticize, the long-time members from the West and the newcomers from the East, the small and the large countries, the debt-ridden southern countries and the fiscally disciplined northerners.

They all had one thing in common, namely that they were only familiar with the Chancellery's plans from an article in SPIEGEL. Merkel had not considered it necessary to have copies of the plan made for her EU counterparts. "The German document is like the Yeti," Czech Prime Minister Petr Neas quipped. "Everyone talks about it, but no one is familiar with it."

Of the 27 heads of state and government, 19 commented on the proposal. Everyone had something to criticize, from substance to style to structure. Merkel and Sarkozy want to create a Pact for Competitiveness that would obligate all euro zone members to adhere to sound social and fiscal policies, including a pension limit that does justice to an aging population, consistent corporate income taxes throughout Europe, and modest wage increases that would no longer be adapted automatically to rising prices. The pact is intended to complement the permanent crisis fund for ailing euro countries, an element of which, Merkel hopes, will see private investors exposed to potential losses.

Non euro-zone members were irked by Merkel's proposal that at first only the euro countries would dovetail their economic and social policies. "Why do you have to demonstrate a split?" Polish Prime Minister Donald Tusk asked the chancellor. He said that he had "fundamental doubts about the method" and asked: "Are the rest of us standing in your way?"

Other summit participants accused Merkel of hard-heartedness. Coupling wages to price trends has been a "social model" in his country for decades," Belgian Prime Minister Yves Leterme interjected. Austrian Chancellor Werner Faymann, a Social Democrat, opposed Merkel's pension plans, saying: "I am not willing to tell my countrymen that they have to work longer." Even Finnish Prime Minister Mari Kiviniemi, ordinarily a champion of reform, voiced concern.

Another group contested the harmonization of corporate income taxes Merkel and Sarkozy had brought into play. His country's economy depends on its low corporate tax, said Cypriot President Dimitris Christofias. "If I give in here, I won't be able to go home," he said. Irish Prime Minister Brian Cowen also defended his country's low corporate tax rates, saying: "We compete with non-EU countries."

Merkel's only supporter was her partner Sarkozy, who engaged in a heated debate with his Irish colleague. The French National Assembly has always complained about Ireland's low corporate tax rates, he said, and yet he supported the billions in aid for Ireland. "I rescued you, and I went to my parliament on your behalf," Sarkozy said testily. "Now you have to help us."

The debate, in short, clearly revealed the new lines of battle within Europe: Berlin and Paris against the rest. And the spokesman for the rest of the countries is Luxembourg Prime Minister Jean-Claude Juncker, whose relationship with Merkel and Sarkozy has been rocky for some time. "I really don't see any added value to the plan," he said critically. Eliminating wage increases pegged to inflation, Juncker said, is no more promising than the earlier proposal to suspend European Council voting rights for those countries who violate European Union budget deficit rules.

Finally, in the early evening, Commission President José Manuel Barroso proposed that the competitiveness pact only include such measures that would not "undermine the single market." Barroso's wording satisfied the critics and imposes tight constraints on Merkel's plans.

The European Commission is also taking a stand against Merkel's plans for a permanent euro crisis fund, as described in her concept of a "European Stability Mechanism" (ESM). The participation of private lenders in losses related to debt restructuring, to which Merkel attaches great importance, is only mentioned peripherally in the concept. The automatic mechanism whereby private lenders would be required to relinquish their claims, as demanded by the Germans, is off the table. According to the document, the affected countries are expected to enter into an "early dialogue" with their creditors, so that the creditors will participate "voluntarily" in debt restructuring measures.

Any forced debt waiver, the plan makes clear, should only be viewed as a "last resort, when alternatives compatible with the market have failed." Those affected are even given a say in determining whether the controversial measure is included in any restructuring plans. "This passage is being tested with market players," the Brussels proposal reads.

The Commission sees the ESM as having the authority to buy government bonds from ailing countries. Otherwise, the planned ESM looks like a copy of the International Monetary Fund (IMF). Like the Washington-based organization, the ESM is also designed to stabilize the currency and help countries in financial straits with fresh cash. Depending on the severity of the fiscal emergency, credit lines for half a trillion euros would be provided for the short and medium term. These credit lines "could be temporarily increased as needed."

The volume of ESM funds would be reviewed at least once every two years to determine whether they are still sufficient. A capital stock of €100 billion ($135 billion) is envisioned, and it would be provided by the member states of the euro zone, with each country's share being determined by its share of the European Central Bank. Germany would thus contribute about €20 billion. In addition to this cash contribution, the countries would be expected to provide other guarantees.

The German government faces further unpleasant debates on the issue: Finance ministers from euro-zone countries plan to discuss the EU proposal at their meeting in Brussels on Monday.