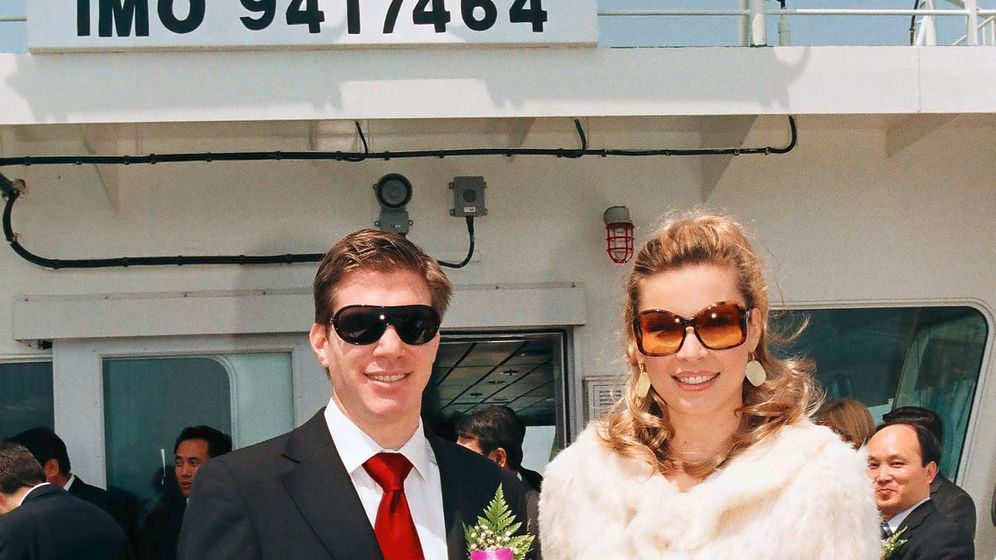 He'd be happy to discuss art, says the spokeswoman of Greece's biggest shipping magnate. He'd be willing to talk about his collection and the market, or about his fondness for German painters, such as Neo Rauch or Otto Dix, from whom he owns several works. Perhaps he might even muse on the Botero painting he recently purchased for €330,000 ($420,000).

George Economou, though, would prefer not to discuss his country. "He is happy to answer questions on art," his handler repeats. She is standing in gold-colored sandals at the entrance to his villa in Maroussi, a northern suburb of Athens. Her billionaire boss behind her, wearing a pink shirt, khakis and boat shoes, is snatching an hors d'oeuvre off a serving tray.

Only a chosen few have received a fuchsia-colored invitation to attend the "Talking Heads" exhibition. Economou will be showing a large part of his collection for the first time this evening. The guests are milling about as a bartender in a large tent mixes mint, ice and the resin-flavored liquor mastika together for a Greek take on the mojito. Between bites, Economou explains that he views art as more than just an investment. His collection, he insists, means a lot to him and he expects it to keep growing.

Economou's little slice of heaven is well-protected. There are a number of guards, and those entering his art gallery must first pass through a security gate complete with a fingerprint scanner.

Sitting in a Mercedes luxury sedan with the air conditioning on high after the private viewing, Economou's daughter Alexandra says that her country is not as safe as it used to be and that she now only takes a taxi in a pinch out of fear of being abducted. Yes, even the rich in Greece have worries.

Last week, Greece's parliamentagreed to a new package of austerity measures that are supposed to reduce expenditures by €13.5 billion between now and 2015, primarily through salary and pension cuts. The measures will lower the average monthly salary in the country to some €950. Families making more than €18,000 a year will no longer receive child allowances. And, this month, Greece is once again trembling in fear over whether it will receive the next €31.5 billion tranche of loans from the European Union. If it doesn't arrive by the end of November, the country will become insolvent.

Stored away in Switzerland

At the same time, there are a number of lists circulating in Athens including names attached to unfathomable sums of money. These belong to politicians, actors and businesspeople, all of whom supposedly have accounts at the Geneva branch of the British bank HSBC. Experts estimate that Greeks have up to €170 billion in assets safely stored away in Switzerland.

"Greece is a poor country with very rich people," Finance Minister Yannis Stournaras recently said. And philanthropy, though a Greek word, is not widespread in practice. Members of the country's upper crust continue to exploit all the loopholes the government offers them. Indeed, the state makes it remarkably easy for them to do so: For a full year now, the government has been announcing that a treaty with Switzerland aiming to put an end to tax evasion is "just about to be concluded." But it has yet to be signed.

The privileged don't even bother to hide their wealth in public. In the rich neighborhoods -- whether Kifissia in northern Athens or Glyfada to the south -- people still speed about in their Porsche Cayennes and Hermès handbags can still be seen beneath café tables. Gucci, Balenciaga and Dior all maintain stores in the Greek capital. It's the florists around the corner that go out of business.

The Greek government can no longer pay its bills and owes private-sector companies some €9 billion. But even now, three years into the crisis, it continues to exempt commercial shipping companies, which make up its most successful industrial sector, from all taxes. This relief for the rich just puts more of a burden on the poor.

The EU's Directorate-General for Competition recently identified 57 different tax amnesties for Greece shipowners alone and, puzzled, sent a letter to the government in Athens.

Leon Patitsas, the 36-year-old heir to a shipping company, numbers among those who have benefitted from these exemptions. Hanging in his office are portraits of his forefathers next to framed pictures of tanker ships. Patitsas is the head of Atlas Maritime, which currently owns six active oil tankers with a seventh under construction in Shanghai. The Greek merchant marine fleet, Patitsas says, is the largest in the world and he believes the tax exemption enjoyed by his industry is a necessity rather than a privilege. "Shipping ensures 400,000 jobs in Greek shipyards that could go elsewhere at any time," he says.

'I Love My Country'

But shouldn't the shipping industry be showing solidarity with the state instead of threatening to leave at the first sign of taxation?

The state doesn't offer any security, Patitsas says, not to investors, businesspeople or him. He says that people in Greece think that capital is to blame for everything, and not the powerful unions that actually destroy jobs with their unrealistic demands rather than preserving them.

Greece-owned ships transport 20 percent of the world's seaborne cargo, though the ships usually sail under the flags of other countries. As such, the world's largest merchant fleet hardly contributes anything to Greece's economic performance, and shipping revenues aren't taxed. In fact, shipping companies don't even have to pay taxes for divisions that have nothing to do with transporting cargo on the seas.

Patitsas and his wife, a well-known fashion model and television presenter, recently gave birth to a son. Just a year ago, the two would occasionally allow themselves to be photographed at home for glossy magazines. But they don't anymore. "We have to be careful," Patitsas says. "A lot of people are envious." When asked what keeps him in Greece, he says: "I love my country."

While Greece has public debt of roughly €301 billion, its citizens have private assets worth almost twice as much. According to the independent Hellenic Statistical Authority (ELSTAT), the top 20 percent of Greeks earn six times as much as the bottom 20 percent.

Patitsas' family comes from Oinousses, a small archipelago in the North Aegean sandwiched between the island of Chios and the Turkish coast. A number of major ship-owning families have roots on the island, including that of Elli Patera. She also numbers among those Greeks who have it all -- and always have.

A decade ago, Patera started her own business as a real estate agent because she was tired of merely being an heiress. She focused on her direct surroundings: properties in the high-class areas of northern Athens, villas hidden behind huge hedges and bungalows sporting five-car garages.

At the moment, the 47-year-old is spending some time on Mykonos. The country's crisis has never reached this island, a favorite resort for the jet set and party locale for the well-heeled. One can buy rosaries designed by Chanel at the local jeweler, and one can enjoy a magnum bottle of Armand de Brignac champagne at the Nammos beach club, on Greece's most exclusive beach, for a cool €120,000.

Patera says her country is afflicted by the same maladies as her profession: Things have gotten out of proportion. Before 2009, she says that only one thing mattered: growth, growth, growth. Every house with a garden suddenly cost €5 million, she says. "Everyone wanted to buy -- the more expensive, the better."

But now, Patera says, the real estate market has dried up. Most owners continue to demand as much as they did before the crisis, €30 million for a house that isn't worth even half as much. No one can or wants to pay that much anymore. "We refuse to recognize the causes," she says. "Most people think that the crisis is only an evil, stupid idea of the Europeans."

Patera's background no doubt helps her keep a level head. People with enough money have no need for conspiracy theories. But what are rich people doing for their country?

Greek President Karolos Papoulias once said: "Everyone acts in accordance with their patriotism." Peter Nomikos says that Greeks are horrible citizens but enthusiastic patriots. The 33-year-old investor from a ship-owning family is actually trying to do something for his country. He has founded an initiative called "Greece Debt Free," which aims to help Greeks buy back their debts. This is an impossible undertaking not only because it involves the astronomical figure of roughly €300 billion, but also because three quarters of this debt is held by public creditors rather than being traded on the open market.

By August, donations to Nomikos' initiative had surpassed €2.5 million. The figure is constantly updated on the "Greece Debt Free" homepage. As of Monday morning, the sum lay at €2,510,072 -- or almost exactly where it was three months earlier.

Six Months for a Refrigerator

The Stavros Niarchos Foundation, named after a Greek shipping magnate of the same name, has also allocated €100 million to immediate crisis relief efforts. It also invests money in things that the rich value: in a park in Athens, an opera and a library. The Alexander S. Onassis Foundation, which honors a deceased son of the former shipping magnate and husband of Jacqueline Kennedy, has launched an architecture competition aimed at beautifying downtown Athens. It also finances several cultural projects -- though a guest performance of Berlin's Schaubühne theater company probably isn't all that high on the list of priorities for people who can no longer afford to visit a doctor because they don't have insurance.

By way of welcome, Petros Kokkalis, a scion of what is perhaps Greece's most influential family, is handing out a green brochure showing vegetable patches. He has set up an enormous garden in one of the poorer parts of Athens. Kokkalis used to be a vice president of the Olympiacos Piraeus football club, which his father once owned. He used to drive flashy sports cars, but now he prefers a Volkswagen Golf. Kokkalis says the crisis has opened his eyes and made him more political. He also says he is keenly aware of his county's problems. For example, he says he had to wait six months for a permit just to install a bamboo bar with a refrigerator in his garden.

When asked whether it wasn't exactly this kind of governmental inaction that allowed his family to become wealthy, Kokkalis shrugs his shoulders and nods. The state still has to become more just and more effective he says.

Has he moved much money abroad? "Certainly not all of it," he replies. It's meant as a joke. He says he can't help it that he's rich and that he never did anything to make it that way. But the vegetable park is his project. Here, he shows school classes mint and oregano growing in beds and cockroaches in a terrarium. There are also horses on the property.

The entrance fee is €4, more than many schoolchildren can now afford. So Kokkalis is thinking about lowering the fee to €2. When asked why there is any admission fee at all, he replies: "We want the project to be self-sustaining."

His family is one of the richest in the country. His father, Socrates, is the founder of Intracom, a multinational technology group. He bankrolled an entire library at Harvard University, and he finances a program on Southeastern and East-Central Europe at its Kennedy School of Government. His son Petros says that the family now has to be careful to make sure that the 10,500 people working for the Kokkalis empire in Greece don't lose their jobs. It's important, he stresses.

George Economou, the billionaire shipowner and art collector, doesn't even want to answer the question of what he does for his country. His spokeswoman will only say: "No information will be disclosed on this matter."