Supporters hailed the Desertec Industrial Initiative as the most ambitious solar energy project ever when it was founded in 2009. Major industrial backers pledged active involvement, politicians saw a win-win proposition and environmentalists fawned over Europe's green energy future. For a projected budget of €400 billion ($560 billion), the venture was to pipe clean solar power from the Sahara Desert through a Mediterranean super-grid to energy-hungry European countries.

Today, a scant three years later, there is still little to show for the project but the ambition.

The list of recent setbacks is daunting. The project has failed to break ground on a single power plant. Spain recently balked at signing a declaration of intent to connect high-voltage lines between Morocco and the rest of Europe. In recent weeks, two of the biggest industrial supporters at the founding of the initiative, Siemens and Bosch, backed out. And perhaps most tellingly, though last week's third annual Desertec conference was held in Berlin's Foreign Ministry, not a single German cabinet minister bothered to attend.

"Much to his regret, Minister Rösler could not participate in the third Dii Desert Energy Conference due to conflicting schedules," the German Economy Ministry said in a statement explaining Philipp Rösler's absence. "Notwithstanding, the federal government, in principle, is willing to support a Desertec pilot project in Morocco. However, there are several open questions. Therefore, Minister Rösler has advised against too much euphoria."

Political backing for energy from the desert, in other words, is evaporating.

The hurdles facing the project, to be sure, have always been high and have become more challenging in recent years. For one, political strains in North Africa have multiplied as the Arab Spring destabilized the political landscape in the region and, in some cases, reignited the historical distrust that exists among neighboring countries. Furthermore, energy needs in the Middle East and North Africa are growing even as a lack of experience and a challenging regulatory environment produce new challenges.

'Where Is the Tax Money?'

Finally, energy policy and security policy tend to go hand in hand. For all the initial enthusiasm, countries have been hesitant about plunging into a large, cooperative grid in Europe, North Africa and the Middle East. The result is a paucity of public investment funds.

"It's a shame," said Dr. Wolfgang Knothe, a co-founder of the Desertec Foundation, a non-profit organization which is a significant motor pushing the Desertec idea forward. "We should say we're closing the whole thing down because we have no political support."

Hans-Josef Fell, a parliamentarian with the Green Party who attended the Dii conference last week, was frustrated as well. "The ministers are not here. They feared the question: 'Where is the tax money?'"

The reasons for the political hesitance are clear. Renewable energy projects remain more expensive than traditional fossil fuel plants and tend to require government subsidies. And Desertec is an order of magnitude larger and more complicated than the offshore wind parks currently under construction in the North Sea. The idea is to generate a significant percentage of Europe's energy needs using solar thermal plants in sunny North Africa and then transmitting that power via an ultramodern grid across the Mediterranean. With Germany having turned away from nuclear fuel in the wake of the Fukushima nuclear disaster in Japan in early 2011 and Europe's ongoing pursuit of reduced greenhouse gas emissions, the need to import renewable energy from the places where it is most abundant is more acute than ever.

Partly because the idea behind Desertec sounds so promising, politicians have not been shy about praising it in public. German Chancellor Angela Merkel sent a note to Desertec that commended the initiative for "helping to forge a broad alliance across business, science and politics to enable big ideas to become reality." European Energy Commissioner Günther Oettinger, one of the few high-level European politicians present, stated his support for the project at last week's conference. But the statements of support are a far cry from the financial support needed to build a grid that truly connects Europe and beyond.

"Everybody is staring at each other and nobody moves," said Sven Teske, director of renewable energy at Greenpeace. "In this deadly, sometimes embarrassing silence, everybody is praising the project. And then silence again."

Part of the problem is historical distrust. No country wants to import electricity and energy security is often at the top of national objectives. Further, the costs of supporting energy production and transmission were noted by German members of parliament at the Desertec conference.

"The rarest resource in Europe is money," said Michael Kauch, a German parliamentarian who is the environmental spokesman of the business-friendly Free Democratic Party. "It's even rarer than energy or rare earth minerals."

The ministers that did not attend the conference were only slightly more circumspect. The German Environment Ministry did not respond to a call for comment. The Foreign Ministry expressed support for "all endeavours to deepen the cooperation between Europe and North Africa on renewable energies."

The political strain showed through last week after plans to ink a deal on three Moroccan solar power plants -- part of a Desertec pilot project -- fell through when Spain unexpectedly did not show up at the signing. Anticipation had built after €600 million worth of Moroccan solar power projects were announced late last month. The deal was expected to be signed at the Dii conference last week and officials were on hand from Malta, Luxembourg, Morocco, Italy, and France. But without Spain, the project is on hold.

"The topic was already in the news," said Klaus Schmidtke, a Dii spokesman who maintained that the declaration of intent was expected to move forward in the next few weeks. "There were a lot of expectations."

Looking for a Connection

Spain's last-minute jitters point to another major quandary facing the project. Though energy is in demand in North Africa and the Middle East, the money is often not there to support major renewable energy projects. One of the only ways for countries in the region to build them is through guaranteed exports. To build plants in countries like Morocco, Tunisia and Egypt, up to 90 percent of the energy generated would have to be exported in order to cover the initial capital investment.

Exporting the green power involves connecting the countries with the sun to consumer countries like Germany by way of long-distance high-voltage power lines. That is expensive, and any country that is to be part of the proposed new grid, like Spain, can throw a wrench in the works. Yet without the grid, significant investment will remain sparse.

"For really good project development you need a regional framework so that you can rely on localities," Teske said. "The business model relies on selling the electricity to a country that is not even connected by a cable right now."

And with significant backers jumping ship, it is not clear when they ever will be. When Desertec launched in 2009, it had a long list of corporate shareholders and partners. Today the list of shareholders includes Deutsche Bank, reinsurance company Munich RE, UniCredit, and utilities E.ON and RWE.

But two major backers have recently withdrawn support: industrial giant Siemens and Bosch, the world's largest auto parts supplier. Siemens cited cost-cutting measures and its withdrawal was consistent with its recent retreat on all things solar. Still, the company was a founding member.

"We regret that Siemens and Bosch will quit the Desertec Initiative at the end of the year," said Schmidtke, who mentioned that Dii is in talks with other companies about joining though he declined to elaborate. "It is not an issue for the success of our work. We have a lot of companies in our network. So we will continue our work and there is a lot to do."

Ambition, in other words, remains plentiful. But action? "The next steps are coming," Dii's spokesman Schmidtke insists. "The concrete projects are continuing on. The political negotiations are ongoing. The situation is quite normal." 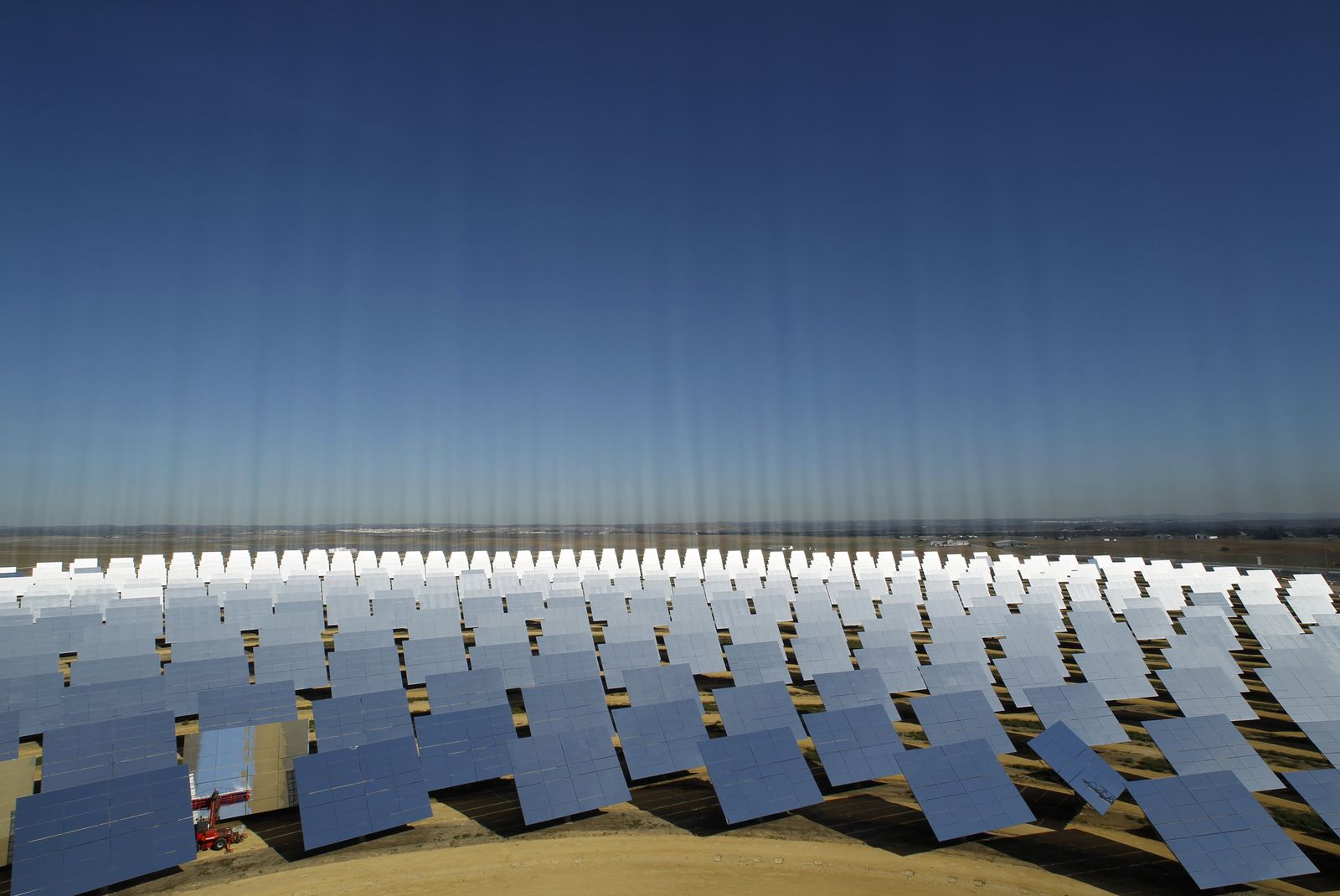 The Desertec project envisions a significant portion of Europe's energy coming from solar thermal plants like this one.