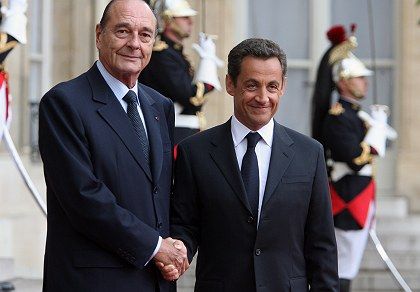 Outgoing French President Jacques Chirac, handed over to his successor Nicolas Sarkozy on Wednesday in Paris.

Nicolas Sarkozy achieved his greatest ambition on Wednesday when he was inaugurated President of France. The 52-year-old took over from Jacques Chirac in an elaborate ceremony at the Élysée Palace attended by family and dignitaries.

The two men first held a private meeting during which Chirac handed his successor the secret codes to France's nuclear arsenal. After the 40-minute meeting Chirac left the palace, after serving for 12 years as president -- his departure was accompanied by loud applause.

The head of the Constitutional Council then proclaimed the official election results and handed over the insignia of the office to Sarkozy in the Salle des Fêtes. The new president then made his first speech as head of state, during which he spoke out against intolerance and urged openness and unity. He insisted on the need to "unite the French," and to "rehabilitate the values of work, effort, merit and respect." He said that the defense of human rights and the fight against global warming would be his foreign policy priorities.

Sarkozy is following the ceremony at the Élysée with a motorcade up the famous Champs Élysée to the Arc de Triomphe, where he is to lay a wreath at the tomb of the unknown soldier. Later on Wednesday he is due to fly to Berlin on his first official trip to meet with German Chancellor Angela Merkel.

Sarkozy, who defeated the Socialist Party candidate Ségolène Royal in the final round of presidential elections on May 6, has pledged to tackle France's high unemployment rate and economic malaise with a range of pro-market reforms. But unions and students have warned the new president not to push through changes on education and labor laws without consultation.

Sarkozy is expected to announce his new streamlined cabinet on Friday. Dominque de Villepin, Sarkozy's arch rival in Chirac's cabinet, resigned as prime minster on Tuesday, and the new president is widely expected to choose the moderate conservative Francois Fillon as his replacement.

The new president has pledged to include centrists and leftists in his new government. There are already reports that the Socialist former health minister Bernard Kouchner has agreed to serve as foreign minister.

Security is tight in Paris on Wednesday in the wake of threats from a group that claims to have links to al-Qaida. They posted a warning on their Web site on Tuesday that they would punish France for electing a "Zionist crusader." The police are also bracing themselves for a repeat of the anti-Sarkozy riots that marked election night.