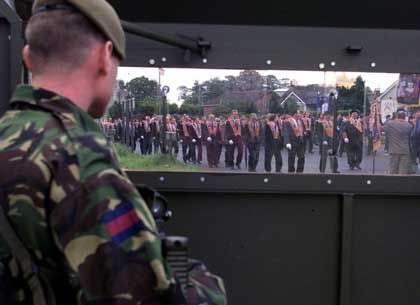 A British soldier keeps watch on Orangemen, a Northern Irish Protestant organization, in this 1999 picture. The British military's operation in Northern Ireland is now officially ending after nearly four decades.

The former head of the British military, Gen. Mike Jackson, said it was not just the British army's longest-ever mission, but also one of its most important. It was "one of the very few waged on British soil," he wrote in a foreword to a recent report on the British army's operation in Northern Ireland, adding it was "one of the very few ever brought to a successful conclusion by the armed forces of a developed nation against an irregular force."

A soldier of Jackson's rank has to put a positive spin on the military's role. His assessment has little to do with reality. The British military's deployment in Northern Ireland was not a success -- in fact, the military quickly became part of the problem.

The summer of 1969 was characterized by heavy clashes in Northern Ireland. They had nothing to do with religion. The Northern Ireland Civil Rights Association (NICRA) had demanded an end to discrimination against Catholics in terms of voting rights, housing and employment. Only home owners were allowed to vote in local elections at the time, and they were mainly Protestant.

Many of them were prepared to defend their privileges using violence. Their militias, which were supported by the almost exclusively Protestant police, raided Catholic neighborhoods until their inhabitants built barricades. On Aug. 14, 1969, the government in London sent troops into Northern Ireland in order to separate the two sides.

Operation Banner, as the campaign was known, was expected to last only a few months. At first the Catholic minority welcomed the soldiers joyfully, believing them to be neutral. 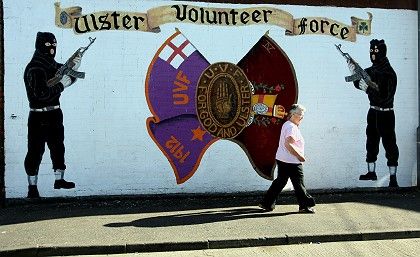 A woman passes a mural for the Ulster Voluteer Force, an outlawed Protestant group, in east Belfast.

But the honeymoon did not last long. It soon became apparent that the military was there to defend the status quo, and to do so by all means necessary. Today it is known that the military's intelligence service employed agents who were involved in murders, weapons smuggling and bombings with the help of their leadership. It is one of the darkest chapters in the history of the British military.

Under these circumstances, fresh recruits flocked to the Irish Republican Army (IRA), which was little more than a veteran's association at the end of the 1960s. The conflict escalated. More than 3,500 people have died in the course of it. A total of 763 soldiers were killed, most of them by the IRA.

The last one to die was 23-year-old Lance Bombardier Stephen Restorick. He was shot by an IRA sniper in 1997, even though the peace process was already considerably advanced at the time. Both the British government and the IRA had recognized by the mid-1980s that there could be no military solution to the conflict.

The resulting negotiations, which were initially conducted in secret, led to the 1998 Belfast Agreement, also known as the Good Friday Agreement, which envisioned a regional government in which all parties would participate -- including the political wing of the paramilitary organizations. But it took an additional nine years until a stable government was formed. Archenemies Sinn Féin ("We Ourselves"), the political wing of the IRA, and the Democratic Unionist Party of radical Protestant minister Ian Paisley agreed on a division of power in May of this year, after the IRA had virtually dissolved. 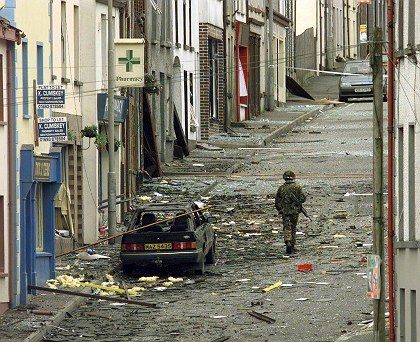 A British soldier walks past the wreckage of a car that contained a bomb in Newtonhamilton in this June 1998 file photo.

Col. Wayne Harber, the commander of the British troops in Northern Ireland, said on the weekend that -- unlike the current situation in Iraq -- the deployment in the province was a "conflict," not a war, because the British army did not use all means available to it, and the operation's duration was limited.

But the supposed conflict was indeed treated like a war. The terrorists were sentenced using special laws and special courts without juries, and they were detained in special prisons.

In 1972, 27,000 soldiers were stationed in Northern Ireland. In total, 300,000 men were deployed in the province. The number decreased constantly after the peace process began: In the end, only 10,500 soldiers remained.

Five thousand of them will stay in Ireland, but they will no longer be responsible for policing. The watchtowers along the border have been disassembled; the military base in Bessbrook, one of the largest on the British isles, has been closed; and the Royal Irish Regiment of the British military has been dissolved.

The official reason is that the situation in Northern Ireland is sufficiently stable for such measures to be taken. The real reason is the lack of recruits. More than 12,000 soldiers are stationed in Afghanistan and Iraq. The British military's Chief of the General Staff, General Richard Dannatt, said in a secret memorandum that was leaked to the press that the military is overstretched: "We now have almost no capacity to react to the unexpected."

One of the highest-ranking British soldiers in Northern Ireland, Lieutenant-General Nicholas Parker, said the reduction of troops would continue in Northern Ireland until a troop level equivalent to that in Glasgow or Yorkshire has been reached. In five years' time, he told The Observer, soldiers "should be going into Tesco's to get their shopping on the way home from their barracks in their uniform and nobody would bat an eyelid."

But such a situation is still a long way off. The Protestant militias have not yet handed over their weapons. The week before last, a policeman was critically injured during an internal feud.