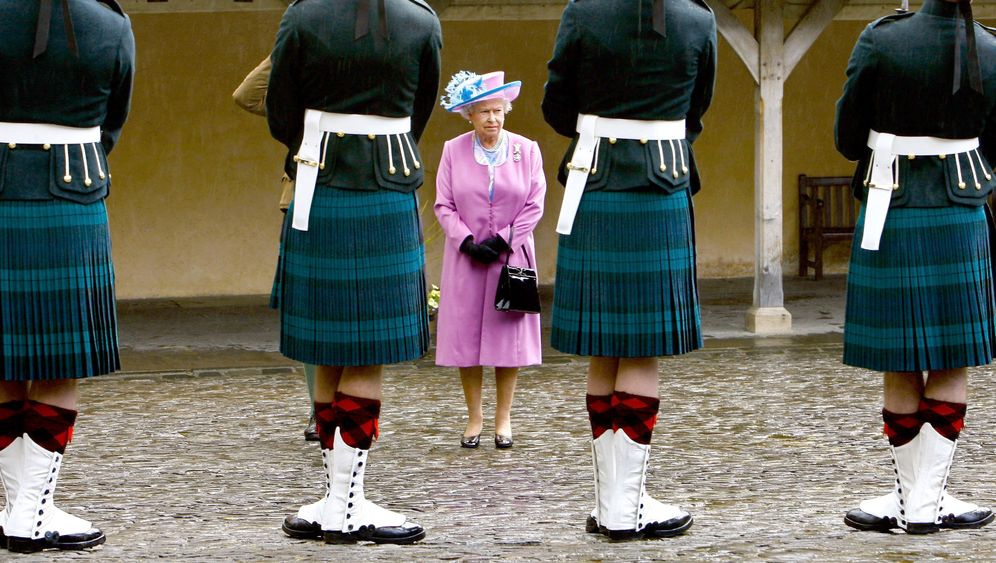 No, there are no Englishmen hanging from the trees in the Scottish Highlands. There are no Scottish terrorists setting off bombs, and someone who speaks with an English accent here isn't likely to be targeted for a beating. Likewise, it's only rarely that you'll see the "Free Scotland" slogan along the highway from Glasgow to Edinburgh. So where exactly are all these separatists supposedly intent on splitting Britain apart?

Though they might be hard to spot, they do exist, they're active and they might even reach their goal in less than four years -- and all in a way that is perfectly democratic.

On Jan. 25, the Scots were commemorating Robert Burns, their national poet. Meanwhile, in Edinburgh, Alex Salmond, the charismatic leader of the Scottish National Party (SNP), announced how he intends to dissolve Great Britain. In a referendum to be held in the fall of 2014, the Scots will be asked to answer the following question: "Do you agree Scotland should be an independent country?" If a majority votes that it should be, the partition could already be completed by 2016.

The move would put an end to what will have been a 309-year partnership -- and be a serious blow. Although it boasts its own nuclear arsenal, Britain is now only a mid-sized power that sometimes still suffers from the loss of its empire. Likewise, it is increasingly isolating itself within Europe. Were Scotland to go its own way, Britain would suddenly see its population drop by 5.2 million, and its economic output could shrink by about £120 billion (€145 billion/$190 billion). However, as one of the few positive consequences for the government in London, the move would also lead to a reduction of nearly the same sum in its mountain of debt.

National pride and claims to sovereignty have always been constants in the often poor relations between the Scots and the English. When William Wallace, the Scotsman better known as "Braveheart" after the Mel Gibson film of the same name, fought for his country's freedom more than 700 years ago, he was convicted of high treason and executed in London in a grisly event that was as thorough as it was customary for the time. First, he was hung by the neck. Then, he was castrated and disemboweled while still alive. And, lastly, he was beheaded and quartered.

Salmond, Wallace's successor in spirit, has no such treatment to fear. The 57-year-old economist has headed the SNP since 1990 with only one interruption. With tactical finesse, he has transformed the party from being a much-ridiculed sideline presence to Scotland's dominant political force. Since the elections in May, the nationalists have enjoyed an absolute majority in the Scottish Parliament in Edinburgh. Even his English opponents admit that they underestimated Salmond for years.

In 1997, when US President Barack Obama was just beginning his political career as a state senator in Illinois, Salmond was already using the slogan "Yes, We Can." The Financial Times sees Salmond as "the canniest politician in the British Isles." The left-leaning Guardian calls the progressive, pro-European politician "the most naturally gifted political performer in these islands." And the conservative Times, which has absolutely no soft spot for separatists, perfidiously named him "Briton of the Year" in 2011 -- a recognition that surely must have come as a big surprise to Salmond.

In fact, even the Queen is well-disposed toward the Scottish nationalist. She occasionally meets with him at Balmoral, her summer castle in Scotland, where they talk about horses, Salmond's second passion. Indeed, he has nothing particularly unpleasant planned for Elizabeth II, since she would remain the head of state in an independent Scotland. What's more, if possible, Salmond would like to keep the pound sterling, since he also feels a bit uneasy about the euro at the moment.

An Old Campaign with New Weapons

The man who will manage the critical SNP campaign on the referendum is Angus Robertson, a 42-year-old former journalist with the BBC. Born in London to a German mother, he spent many childhood vacations in Vorarlberg, Austria's westernmost state, and speaks German with only the slightest accent. The warnings that Westminster politicians repeat like a mantra -- that Scotland cannot afford to be independent -- irritate Robertson. "That's nonsense," he says.

Robertson's magic weapon in the fight to win a majority in the referendum is a database he has developed called "Activate." It includes the names of all 4 million eligible Scottish voters and information on whether they normally vote. This information, in turn, is linked to commercially available marketing data on factors such as income, education, age and living situation. The database allows Robertson to examine in detail where the key individuals -- the swing voters, so to speak -- live so that SNP activists can be dispatched in a targeted way to convince them to support the referendum. "We have the best political campaign machinery in Britain and all of Europe," he boasts.

Scotland's most recent move toward separating itself from the rest of Britain began picking up speed three decades ago, when Britain was suffering under its power-conscious ruler, then-Prime Minister Margaret Thatcher. Her rigid economic policies also drove mines, shipyards and traditional heavy industry in Scotland into the ground. Indeed, the Thatcher years have been embedded in the collective Scottish memory as an English attempt to drive their land into poverty.

So far, the Scots have been pleased with the performance of the SNP-led government. In England, university students will have to pay up to £9,000 a year in annual tuition fees starting this year, while students in Scotland will continue to pay nothing. The Scots also pay no fees for prescription drugs, and the government even pays for nursing care. The rest of Britain -- demoralized by the new austerity measures constantly being imposed by London -- is becoming increasingly envious of the seemingly comfortable way of life in the north.

Salmond is promising his fellow Scots an even better life after independence. He points out that there is still oil worth more than £1 trillion under the North Sea and that, once independent, the Scots will no longer have to share this wealth with the rest of Britain.

Still, things haven't reached that point yet. Polls indicate that between 40 and 50 percent of Scots would follow Salmond to independence at this time. What's holding them back are residual doubts about whether Scotland can afford his way. But the Scots are tempted. According to the polls, two-thirds of them would vote right away for independence if that would just leave them £500 better-off a year.

For the moment, London and Edinburgh have to coordinate and iron out the details of the referendum. Salmond wants to include one additional question that would make him a winner even if he lost his case. He wants the Scots to decide on "devolution max" as well -- a transfer of most powers from Westminster to the Scottish National Assembly in Edinburgh. In this case, Scotland would be just short of full independence. But David Cameron, who could very well be the last prime minister of Britain as we know it, wants for tactical reasons to limit the Scots' right to decide on their future to a simple "in" or "out."

For Salmond, this inflexible position serves as yet more proof of London's arrogance. "What we're seeing," the separatist leader angrily said in mid-January, "is the most extraordinary attempt to bully and intimidate Scotland by Westminster politicians."